Debate in Tibetan Buddhism: What Are They Debating and Where to Enjoy the Debating in Tibet

Debating in Tibetan Buddhism has been an essential part of the training of monks since the time of the first Buddhist monasteries in Tibet, and has been carried forward as a tradition of Buddhist heritage to the present day.

In Tibetan monastic debates, the main intention is to defeat misconceptions on the philosophy of the Buddhist scriptures, to establish and maintain a defensible point of view, and to overcome and disprove any objections to that view. In Tibetan Buddhism, the debates are more than mere academic learning. They are intended to use direct implications from what is obvious to provide an obscure or less obvious state of a phenomenon. Debaters look at it as a way of understanding the nature of reality by the careful analysis of the state of existence of what is ordinary.

The debating monks are one of the highlights of a tour in Tibet, and can be seen in several of the monasteries that are normally part of a Tibet tour, such as Sera, Drepung, and Tashi Lhunpo Monasteries. Tourists in Lhasa flock to the Sera Monastery every afternoon that the debates are on, to watch this amazing spectacle of the devout Buddhist philosophical debates.

How do Monks Debate in Tibet?

In the practice of Tibetan Buddhist debates, there is a challenger and a defender, with the challenger standing and asking the questions while the defender sits and defends his position. In many of the debates that can be viewed by the tourists that visit monasteries in Tibet such as the famous Sera Monastery, the monks use elaborate gestures and emphatic movements during the debates, which many tourists will find amusing and amazing, However, each gesture of the debate has a specific meaning. 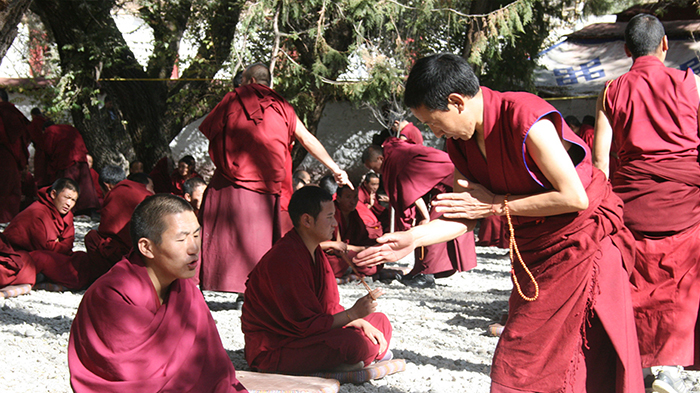 There are special gestures for monks debating.

When asking the question, it is only the standing challenger that claps his hands, and is used to signify the ending of the question and the turn of the defender to defend his position. The clapping has more meaning than just to signify the defender’s turn, though. The right hand represents the practice of a method, such as compassion, while the left represents wisdom. Bringing the two hands together in the clapping motion represents the joining of method and wisdom. At the same time, the challenger will stamp his left foot, to signify the closing of the door to rebirth in the lower levels.

After the clap and stamp, the challenger will hold out his left hand, so that wisdom can keep the door to lower rebirth closed, while raising his right arm with his prayer beads to represent the fulfillment of the compassionate gesture, lifting all the suffering beings of the world out of the cycle of rebirth. In Tibetan Buddhism, the cycle of rebirth only ends when one attains enlightenment.

The verbal points of the debates are just as meaningful as the gestures, and there are two main forms of argument used in the Buddhist debates. On one side, there is the thesis and reason, stated together in one sentence, while on the other side is the consequence, the outflow of the defender’s assertions. These assertions, or defenses, can come in the form of one of only three statements:

Where and When to Enjoy Monk Debate in Tibet

One of the most important monasteries in Lhasa, Sera Monastery is the prime location to view and enjoy the Tibetan monks in their debates. Dedicated to the Gelugpa School of Tibetan Buddhism and one of the Great Three monasteries, the monastery is one of the biggest university monasteries in Tibet. Sera Monastery has a long tradition of monastic debates, which are held in the special debating courtyard, a courtyard of crushed stone and shady trees. One of the most spectacular sights in Tibet, these debates can give you a sense of the importance of debate in Tibetan Buddhism, even if you do not understand what is being said. 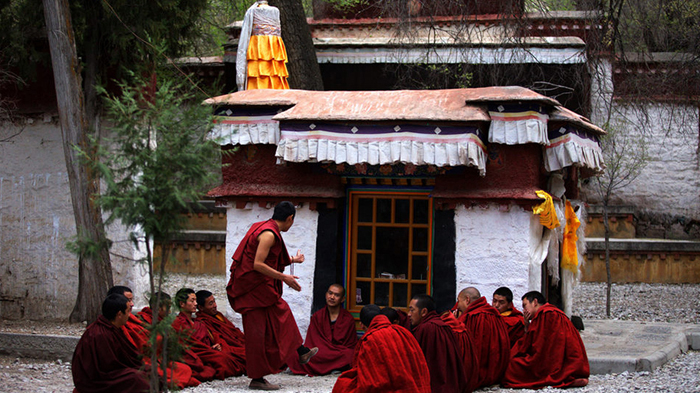 Sera Monastery is the best place to Monks Debating.

The air in the courtyard is charged with energy during the debates, which last for almost two hours and are a vigorous and energetic way to debate the philosophy of Tibetan Buddhist scriptures. The debates are noisy and extravagant, and are held every afternoon of the week, with visitors allowed to watch as long as they remain quiet. While this is a great spectacle for the tourists, it is still a serious debate and an important part of a young monk’s training. The main difference between Sera monastic debates and those of other monasteries is that it is the young monks that are seated, with the older monks firing the questions at them to respond to.

Another place to view and hear the amazing debates of the Tibetan Buddhist monks in a Lhasa tour is the Drepung Monastery, another of the Great Three Gelugpa monasteries of Tibet, the third being Ganden Monastery. Drepung Monastery is the largest monastery in Tibet, and the debates are held daily in the courtyard, where the monks debate the Buddhist sutra, challenging their masters to defend their positions on their belief in the scriptures.

If you time it right, you can spend time at both Sera and Drepung monasteries to view the debates, and may find that the energy that permeates the courtyard is addictive. Watching how the debates progress is a great way to learn more about Tibetan Buddhism, and the eternal search for enlightenment and the release from the endless cycle of rebirth. The debates teach the young monks to question and make their arguments over the Buddhist philosophies, scriptures, and theology.

Far away from Lhasa, in the city of Shigatse, lies the Tashilhunpo Monastery, its golden roofs shining in the bright Tibetan sunshine. The largest monastery in western Tibet, the debates are held in the Debating Courtyard of the Kelsang temple, one of the oldest and largest buildings in the monastery. As well as being able to watch the debates, visitors to the monastery can see thousands of images of Sakyamuni Buddha in many different poses and postures that line the inner walls of the courtyard as an inspiration for the monks.

The monastery is also the site of one of the most important sutra debates of the year, where more than 100 monks from the four Zhacangs or academies in the monastery spend three days in debating contests as part of their higher training. Overseen by the highest lamas of the school, the debates wrangle on for hours at a time, until just one debater is left standing at the end of the three days.

Dos and Don’ts When Enjoying Buddhist Debate in Tibet

When watching the Buddhist monks debating in one of the monasteries where tourists are allowed to enter the debating courtyard, it is important to observe a few rules in order to maintain the right environment for the young monks. Spectators are permitted to attend and watch, but are required to keep quiet during the debates. Interrupting or disrupting the debates, especially to just ask questions, is a major taboo in the monasteries, and should not be done. 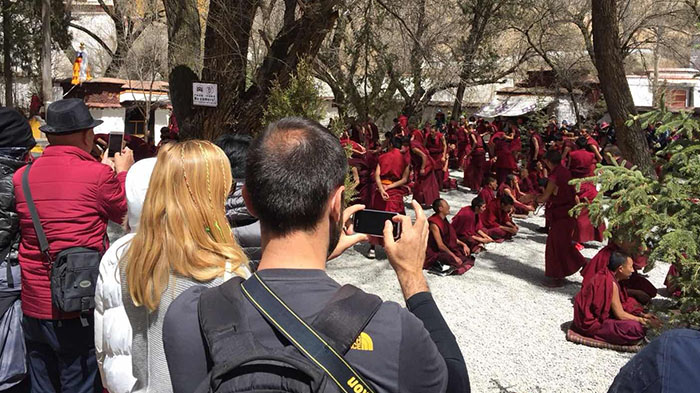 It is important for tourists to remain a Distance from the Debaters.

You should also remain a respectful distance from the debaters, to allow them room to move and speak with each other without distraction. Spectators are normally allowed to stand around the edges of the courtyard, rather than ringing the debaters as if it was a street fight. The debates can be fun to watch, and unless you understand Tibetan, you will not really need to know what is being said. Besides, the monks perform their debates in very loud voices, so you would need to be deaf not to hear them.

There are also some rules about photos in some of the monasteries, and it is best to ask your guide as to the exact rules in each place you visit. Some monasteries, such as Sera, allow photos to be taken with permission during the debates, as long as it does not disturb the debaters. Others do not allow any photos at all. The norm when photographing in Tibet is to ask permission from the subject first, as a polite gesture. In the debates, it is not done to interrupt just to ask permission, so if you are not sure if it is permitted, do not take photos until you know from your guide.

0 Comment ON "Debate in Tibetan Buddhism: What Are They Debating and Where to Enjoy the Debating in Tibet "