Qamo, a Tibetan religious dance related toTibetan Buddhism, is a well-established performance art form combining scripture-chanting in perfect unison with music and dance. Qamo dance is usually performed in temples by monks with solemn and splendid atmospheres so as to subdue evil spirits in monasteries.

The religious dance Qamo in Tibet came into being during the conflict between Buddhism and the aboriginal Bon religion. In the process of localizing Buddhism, Padmasambhava from Kashmir created a kind of religious dance to subdue the "evil spirits" in monasteries by giving the local Tibetan dances Buddhist interpretations. This religious dance gradually became popular as Qamo, a sorcerer's dance.

According to Chronicles of Tibetan Kings, various kinds of animal-mime dances, divine-instrument dances, drum dances and flower-offering ceremonial dances appeared during the reign of Songzan Gambo in the seventh century.

Instead of absorbing the local Tibetan dances completely, Padmasambhava selected only some animal-mime dances and divine instrument dances that suited Buddhism and combined them with the ceremonial mask dance of the Bon-po religion. These dances and Ox Dance, Deer God Dance and Dharma Protector Dance, preserved to this day, trace back to the same origin.

Before the modern Sorcerer's Dance begins formally, a traditional livestock sacrificial ceremony is held. However, livestock is no longer killed since it goes against the doctrines of Buddhism. Mostly drawings are substituted.

When the ceremony begins, suona horns are blown and drums and cymbals beaten, a group of performers playing demons walk slowly round as a prelude to the dance. This is followed by the Demons' Dance, Skeleton Dance, Ox God Dance, Deer Dance, Guardian Dance and Dharma Protector Dance.

Between dances Lamas put on wrestling and acrobatic bouts to entertain the spectators. Sometimes, they perform stories from Buddhist scripture that bear messages to do good things in other people's interest, such as "Sacrifice Life to Save the Tiger" and "Dance of the Man of Longevity," who is believed to be generous in bestowing longevity and good fortune. 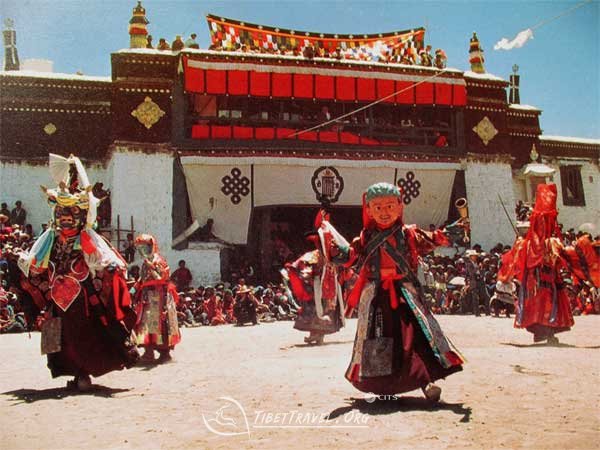 The last act is for the divine soldiers to drive away the evil spirits. With guns on their shoulders, the performers send Duoma (the leading demon, made of butter and tsampa) to the wilderness and burn him to drive away evil for the year and pray for good fortune in the coming year.