Architecture in Tibet is a wonderful reflection of Tibetan culture. Tibetan architecture is influenced by the geography and climate of Tibet plateau, Tibetan culture and Buddhism, and traditional architectural styles of surrounding regions, like India, Mongol, Nepal, and mainland China (Tang Dynasty).

When you visit Tibet, you will be marvel at the splendid Potala Palace, be curious about the stone houses, or eager to see the typical tent house of Tibetan nomads.

Here we listed the top 5 things you shall not miss to appreciate the buildings and houses you meet in Tibet.

Tibetan houses are usually made out of a mixture of rocks, wood, cement, and earth for Tibet is very rich in these materials. And it is easy to distinguish from the exterior.

Unlike modern houses, Tibetan structures can be told almost by their appearance what materials they are made of. Different materials also give Tibetan architecture a different look. 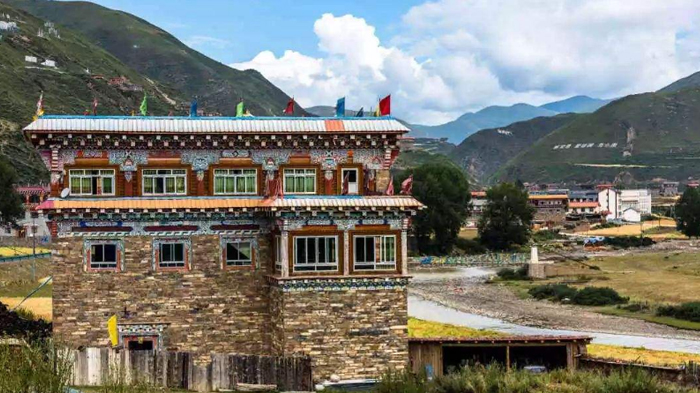 You can see the Tibetan stone houses along Sichuan-Tibet route.

Along the Sichuan-Tibet route, you can see Tibetan stone houses built with small stones and stone tablets. This unique Tibetan-style architecture is also a characteristic of the Jiarong Tibetan people living in western Sichuan.

There are also houses made of special materials where Tibetan nomads gather. Their dwellings are called tent houses. The most traditional Tibetan tent houses are made of wool from yaks.

Red, white, and black are the predominant colors in Tibetan architecture. All three colors are derived from the local soil and are purely natural pigments.

In Tibetan culture, these three colors also represent the three spirits that in Heaven, on the earth, and below the ground. The Tibetans built their buildings with these colors in the hope that they would be protected by the spirits and that they would be safe.

White in Tibetan culture symbolizes holiness, sanctity, justice, goodness, and serenity. The Tibetan people's love of white also stems from their awareness of nature. The snowy mountains, white clouds, and yak milk are all white in their daily lives. In addition, white is also a reverence for the primordial deity, the White God of Heaven. In Tibetan Buddhism, white is a sacred symbol and the color of the wind. 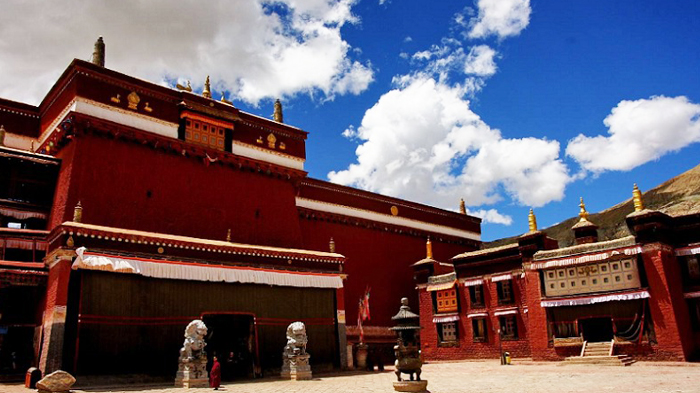 Sakya Monastery is the most important monastery of the Sakya sect of Tibetan Buddhism.

Red is a symbol of majesty and status in Tibetan culture. In architecture, different depths of red also correspond to different grades. In Tibetan Buddhism, red represents the "god of the earth", which is the heritage of the ancient Bon religion. In addition, the color red also represents the boundlessness of the Buddha's teachings, which is the most devout believers of the Tibetan people. This is why the exterior walls of most Tibetan monasteries are red.

In Tibetan Buddhism, black represents the "Underground God". The window frames of Tibetan buildings are mostly black because in Tibetan Buddhism black is the color of the goddess of Dharma protection and can ward off evil spirits.

In addition to these three colors, yellow is also a widely-used color in Tibetan architecture. In Tibetan Buddhism, yellow is the color of the Gelugpa school and in Buddhism, it is the symbol of Manjushri Bodhisattva.

These four colors set the tone of Tibetan architecture. Of course, you can also find the five representatives colors of Tibetan Buddhism, namely yellow, green, red, white, and blue, in some of the details of the decoration. All of these details are worth looking for and savoring when you visit.

3. The Special Roof of Tibetan Architecture

The roof of Tibetan houses is flat so that it is easier to remove frequent snows. The flat roof is also built to conserve heat as little fuel is available for heat or lighting in Tibet.

Most of the religious buildings in Tibet have sloping golden roofs, which are only used in palaces, monasteries, and pagodas, and are a symbol of respect and political and religious power in Tibet. The style of gold roofs can be influenced by the culture of the surrounding area, and the roof decorations are rich in meaning. 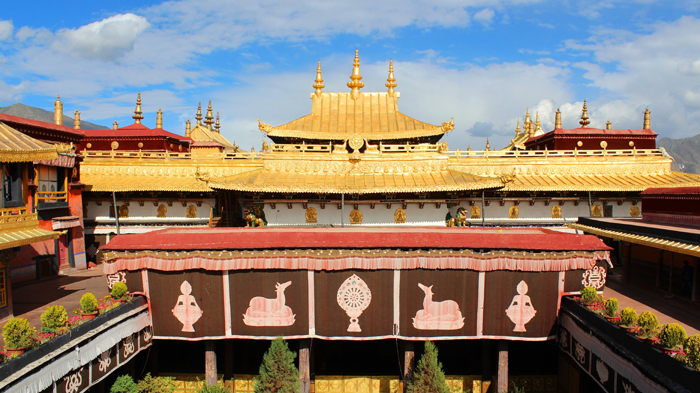 Golden roof of the holy Jokhang Temple in Lhasa

For example, the golden roofs of the Potala Palace and the Jokhang Temple are Chinese style, while the golden roof of the Samye Monastery is Indian style.

Windows of Tibetan houses are generally small because the Tibetan plateau is very sunny and there are large temperature differences, so smaller windows can be used to regulate the lighting and temperature.

A major feature of Tibetan architecture is the decoration of the windows. Despite their small size, Tibetan-style windows are framed I black, which is called ‘Baka’ in Tibetan. 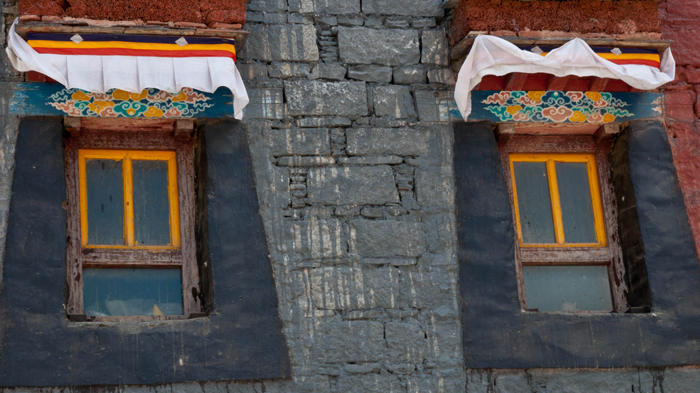 The windows of Tibetan buildings are usually decorated with a ladder-shaped black frame.

These black patterns are trapezoidal, which on the one hand exaggerated the visual effect of the narrow windows and doors, and on the other added to the stability and solemnity of the architectural form.

With this black decoration, the windows also look like a yak-headed totem, which is a symbol of good luck in Tibetan culture.

The tops of the windows have an eave that is covered with a piece of red, white, and blue striped cloth.

5. The Decoration of Tibetan Architecture

The Tibetan people love and are adept at decoration. The decoration of Tibetan architecture is mainly related to religious culture. Both religious buildings and ordinary houses in Tibet are carved and decorated with religious motifs and paintings on their pillars and balustrades.

Tibetan people love and are good at decorating. The decoration of Tibetan architecture is mainly related to religion. 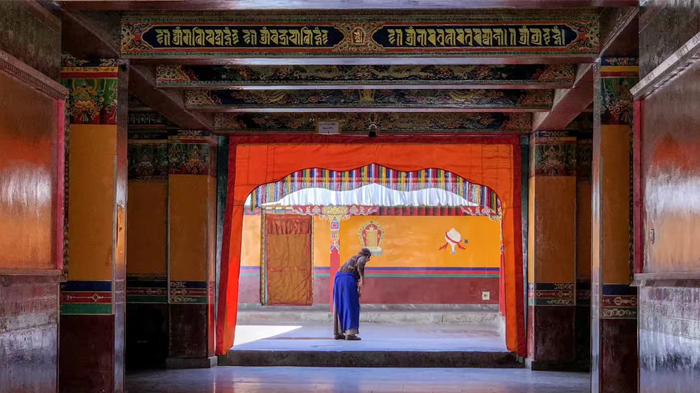 Decoration of Tibetan monastery in Tibet

In addition, some Tibetan religious buildings also have decorations that are partially imitated from Han Chinese architecture, such as wood carvings, fighting arches, and eaves. These are often found in palaces and monasteries.

If you are interested in the unique architecture of Tibet, then you should not miss the following places.

Palaces and Buddhist Monasteries in Tibet

The most scientifically and aesthetically valuable Tibetan architecture is Tibetan Buddhist monasteries and palaces.

Among them, the most famous one is the Potala Palace which was designated as a World Heritage Site in 1994 and considered as the most important example of Tibetan architecture.

The palace composes of over a thousand rooms within thirteen stories and houses portraits of the past Dalai Lamas and statues of the Buddha.

It is divided into the outer White Palace, which serves as the administrative quarters, and the inner Red Quarters, which houses the assembly hall of the Lamas, chapels, 10,000 shrines, and a vast library of Buddhist scriptures.

Besides, Tibetan-style hotels in Lhasa are also great places to research the architecture of Tibet. 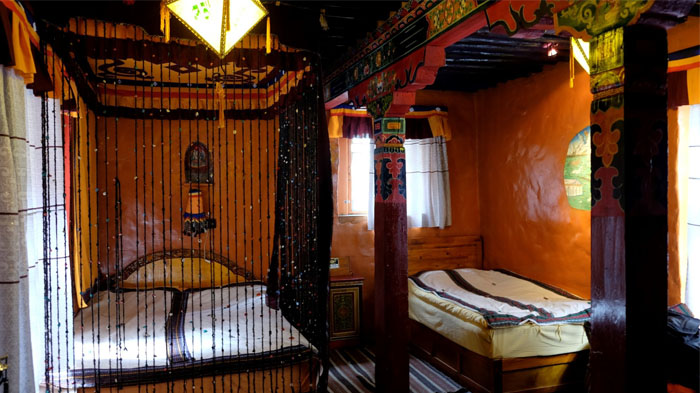 Shambhala Palace Hotel is one of the favorite traditional Tibetan hotels in Lhasa.

In Tibet, especially Lhasa, you can find exquisite Tibetan hotels and guesthouses that not only maintain the traditional Tibetan architecture on the outside, but also the Tibetan home soft furnishing on the inside, allowing you to immerse yourself in the Tibetan cultural experience.

When you visit different areas of Tibet, you can also get a better understanding of the local culture through these differences in local architecture.

If you have any further questions about Tibetan architecture or would like to learn more about Tibet architecture during your Tibet tour, please feel free to contact us. We will provide you with the most professional and customized itinerary in Tibet.