Lying around 100 kilometers to the southwest of Lhasa, Lake Yamdrok is one of the Great Three Holy Lakes of Tibet. Lying on the southern edge of the Nyenchen Tanglha Mountains, this stunning lake, with its beautiful turquoise-blue waters is one of the most attractive sights of the plateau close to the Tibetan capital. Lying in Nangartse County of Lhokha Prefecture, the lake is said to have been formed by a goddess who wanted to ensure the survival of the land and people of Tibet, and joined the nine lakes into one. It is said in Tibet that, if Lake Yamdrok ever dries up, then Tibet will be forever uninhabitable.

If photography of the lakes is what inspires you, then you can find no better place in Tibet to photograph than Lake Yamdrok. For most photographers in Tibet that are planning a trip to photograph Lake Yamdrok, a certain amount of equipment is needed, and while you may like to bring all of your gear, since you are never sure on what the conditions will be like, it is not advisable. For a good photography trip to Lake Yamdrok, you should carry, as essential items, a good DSLR body, several lenses that can all fit the one body, including wide-angle lenses for those vista shots, a lined camera bag, to keep the equipment warm, tripod and ball head, lens filters, reflector kit, cleaning equipment, protective weather covers for the equipment, and a remote shutter release unit.

For batteries and memory cards, you should bring plenty of spare with you, as you may not be able to charge and upload as often as you can in other places. You should also keep them close to your body to keep them warm, as the colder weather can cause battery drain and corrupted memory cards. Try to keep your gear as light as possible, as you may need to walk to get the best locations for shooting the lake.

What and Where to Photograph at Yamdrok Lake?

Photography at Lake Yamdrok is varied and interesting, and there is much more to shoot than just the lake. With the mountains in the background to the east and the low hills and plains to the south, the backdrops to the lake are numerous and varied.

The Kamba La Pass, which you cross over on the way to the lakeshore from Lhasa, is the ideal place to get the best wide-angled photos of the lake with the mountains in the background. At more than 4,800 meters above sea level, the vast expanse of the lake is laid out before you, and the shot is one of the best vista shots of the lake you can find.

The highest mountain in the Lhagoi Kangri (Nyenchen Tanglha) Mountains, to the west of Lake Yamdrok, Mount Nojin Kangtsang lies at an altitude of 7,191 meters. Also known as Mount Nyenchen Khangsar in Tibet, this massive peak is the highest mountain close to Lhasa, and the only mountain above 7,000 meters in the area of Lhasa and Shannan. Standing on the crest of the Kamba La Pass, you an get a great shot of the lake along its width, with the stunning peak standing tall in the far distance. 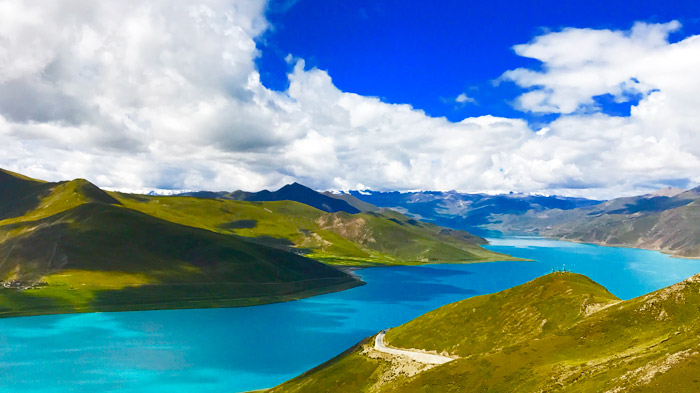 Everyone wants a shot of the lakeshore, and rightly so, as it shows that you are right on the lake itself, rather than taking the photo with a good zoom lens from far away. The lakeshore around Lake Yamdrok is a stony and rocky shoreline, with plenty of mani stones and sacred rocks to shoot as a foreground to the lake behind it. You may even come across some prostrating Tibetan pilgrims if you walk around the lake shore for a while. However, you should make sure you have their permission before taking photos.

The water in Lake Yamdrok changes color with the light of the sun, and ranges from deep blues to turquoise greens and aqua. Some parts of the lake where there are inflows from the mountain snow melts and streams are even multicolored at the same time, and make for a great rainbow-colored shot of the surface water, with the mountains reflecting in the surface.

The waters of the lake are very clear, and there is little sediment thrown up during most of the days. This means that, if you keep still close to the water, and do not cast a shadow on the surface, you can get some great shots of the shoals of fish that reside in the lake.

Migratory Bird on the Island

Lake Yamdrok is a haven for migratory birds that come south for the winter months, and some that come north for the summer. There are also a huge variety of local Tibetan birds that spend the entire year on the many small islands that dot the lake. One such island is known as Bird Island, and is a sanctuary for migratory birds. Arrive early in the morning or late in the afternoon to get great shots of the birds lifting off or landing, as they leave or come back to roost from their days of foraging for food. - Know more about Yamdroktso Bird Watching 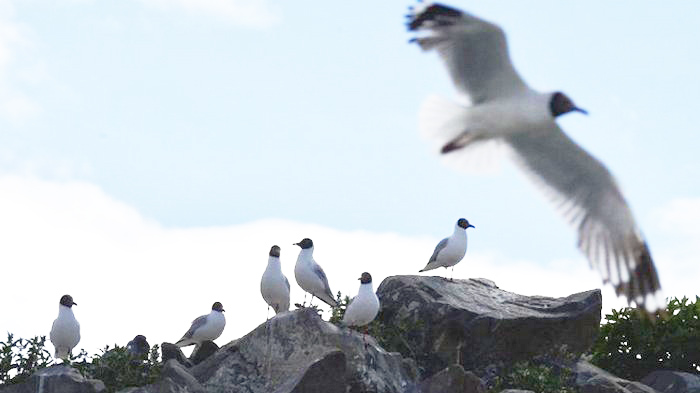 Bird Island is the biggest paradise for waterfowls and wild birds in Tibet.

Lake Yamdrok is also a favorite place for photos with the beautiful, if massive, Tibetan Mastiffs, the trained dogs that are often found in nomadic herder’s camps across the plateau. A rare and indeed expensive breed, especially outside Tibet, these huge hounds spend their nights in the guard of the nomadic herds of yaks and sheep. However, at Lake Yamdrok, they are trained for a different task, to sit or stand with you can have their photos taken, dressed in their red Buddhist ruffs.

With little in the way of light pollution in the area around Lake Yamdrok, it makes for a great place to get some good low-light shots of the starry night sky. You may need to have a longer exposure time to get the best shots, and with the maximum exposure, or time-lapse photography, you can get a great image of the turning of the universe above you in the night sky.

For shooting Lake Yamdrok, the best time is normally from April to June and late September to the end of December. Spring and autumn are the best times to get great photos, as the summer months can be wet and cloudy since Lake Yamdrok is a little more affected by the monsoon than the western areas of Tibet. However, from November, the lake starts to freeze over, and that late part of autumn and early winter can give you some great shots of the frozen lake as the ice slowly creeps across its surface. 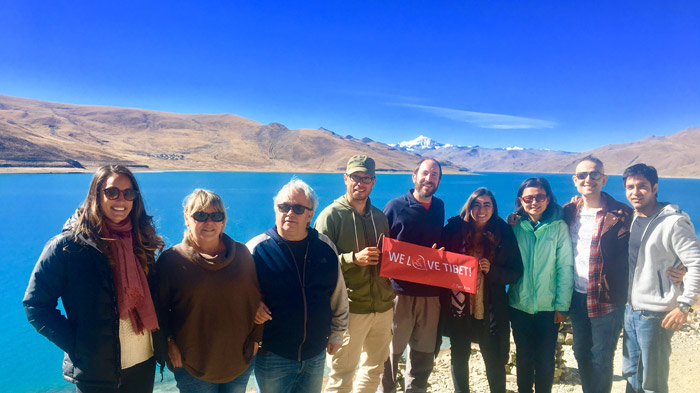 Enjoying the great view of the stunning Yamdrok Lake in Tibet autumn.

The early morning is the best time of day to take shots of the lake, with the sun rising in the east and coloring the lake’s waters an orange-blue tinge. The glow of the sun over the Kamba La Pass is also a great way to get good light for the shots, with the sun directly behind you.

While you can find some eateries along the highway heading towards and alongside the lake, there are limited choices, and most serve Sichuan cuisine. Prices are a little more expensive than you would expect, and are comparable to the small restaurants in Lhasa.

You cannot find hotels near the lake as well, and the closest decent hotel lies around ten kilometers to the south of the lake, which is too far for most travelers. There are some basic guesthouses along the roadside and in the nearby town of Nangartse, towards the western end of the lake. You also have the option of camping beside the lake, which is one of the more popular options for traveler heading to the lakeside in the spring to autumn seasons.

How to Get to Yamdrok Tso Lake

Getting to Lake Yamdrok is relatively easy, and if you are an international traveler, your guide and driver will know the route they need to take to get you there. Once you leave Lhasa to the west, you will follow the G318 Friendship Highway for around 64 kilometers, passing through the town of Quxu, following the Lhasa River Valley.

At Quxu, the Lhasa River joins the upper reaches of the Yarlung Zangbo River, which will later become the famous Brahmaputra, and the route to Lake Yamdrok passes through the town and turns south to cross the Yarlung Zangbo at Dagaxiang, 7 kilometers from Quxu. From there, the route then follows the S307 Provincial Road, which heads southwest for around 42 kilometers to Zhamalongcun, where the road joins the northern shores of the lake.

While the photos of the Tibetan Mastiffs are great, it is not a good idea to get close to them in places where they are not set up for having photos taken, they are dangerous animals. You will have to pay to take your own photos of the dogs, although the locals are usually reasonable, and can be bartered with a little. But please remember that this is their income, so do not try to make the price too low.

For taking photos from the pass, a wide-angled lens is the best option, as it gives you the ideal panoramic vista of the mountains that surround the lake shore.

If you are traveling in the latter part of the year, around November and December, take your own food with you, as the small places that sell food along the highway are usually closed for winter then, with very few tourists traveling the route to Lake Yamdrok.