Famed for their Buddhist universities, which are two of the finest in the world, Sera and Drepung are two of the main highlights of any trip to Lhasa, and are attractions that should not be missed. Highlights of the day include their unique Buddhist debates, stunning landscapes views, beautiful Tibetan Buddhist architecture, and the relaxing kora trails around them, which make for a delightful stroll in the Tibetan countryside, with the most awesome views.

Your tour to Drepung and Sera Monasteries starts in the morning, with a pickup from your hotel, and travels first to Drepung, in the western outskirts of the city, a short drive from almost everywhere in Lhasa. After staying the morning in the monastery and exploring its stunning delights, you will get lunch in one of the local restaurants, before traveling to Sera Monastery in the northeast of the city, where you can experience the stunning Buddhist monastic debates, with their extravagant gestures and loud shouting and stamping. After the tour, you will be dropped off at your hotel, and the rest of the day is yours.

Drepung Monastery was first built in 1416 by Jamyang Chojey who was a direct disciple of Je Tsongkhapa, the founder of the Gelugpa School of Tibetan Buddhism. It housed 7,700 monks in its heyday. It was known for its high standards of academic study, and was called the Nalanda of Tibet, a reference to the great Buddhist monastic university of India. 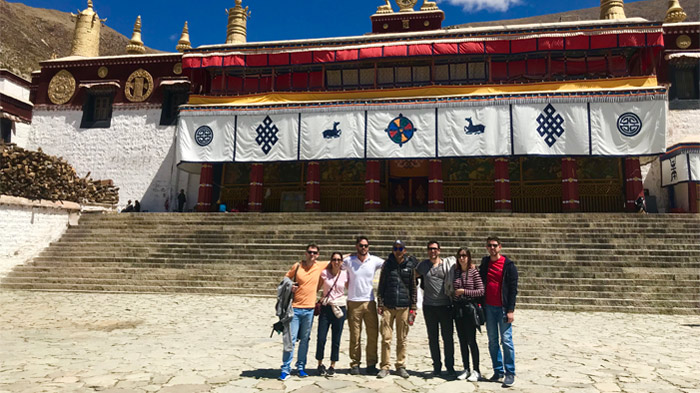 Built in 1416, Drepung Monastery is the largest monastery in Tibet.

It was said that in late 1930s Drepung was divided into four colleges, from the original seven Dratsangs that were built in the monastery, each housing monks from a different locality. As a university along the lines of Oxford or the Sorbonne in the Middle Ages, its colleges have different emphases, teaching different lineages and geographical affiliations. Today its population is much smaller, with merely a few hundred monks. However, the institution has continued its tradition, and teaches many of the monks from around the region at its excellent colleges, which includes a college dedicated to Tantric Buddhism.

What's more, the monastery houses many cultural relics, which makes it more superb. Statues of Manjushri Bodhisattva, and Sitatapatra found on the first story of the Coqen Hall, rare sutras on the second story and Jamyang Choge’s conch shell given by Tsongkhapa on the third one, all add to the wonder of the monastery. Exquisite statues of Tsongkhapa, Kwan-yin Bodhisattva, Manjushri Bodhisattva, Amitayus, and Jamyang Choge in other sutra halls, as well as flowery murals on walls also fully present the wisdom of Tibetan people.

Drepung Monastery is also one of the best places in Tibet to enjoy the Shoton Festival, and its related thangka unveiling ceremony, which is regularly attended by tens of thousands of local and international Buddhists. Held on the fifteenth day of the fifth month in the Tibetan lunisolar calendar, which is around the beginning of August, the Shoton Festival is celebrated to thank the monks for their 100 days of fasting and meditation, during which they do not step outside, so they do not step on any living creatures for the whole period. 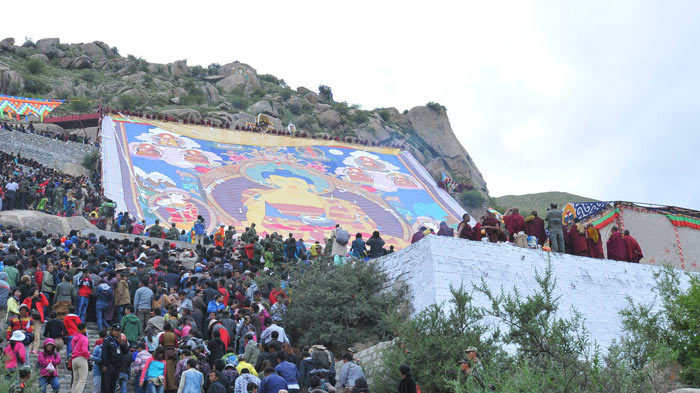 It's a good choice to enjoy Shoton Bhuddha Exhibition Festival at Drepung Monastery.

Once the 100 days is over, the monks would originally come out of their monasteries and greet the outside world once more, and the local villagers would give them offerings of milk curds as thanks for their sacrifices. Over the centuries, the milk curds changed to yogurt, which is why the festival is also known as the Yogurt Festival. The festival starts early in the morning, with the unveiling of a giant thangka painting on the wall behind the monastery at Drepung, which is flocked to for prayer by thousands of devout Buddhists, while burning juniper branches blow smoke over the whole proceedings. For anyone visiting Drepung Monastery at Shoton festival, it is one of the most exciting and enthralling sights in Tibet.

In addition, Drepung Monastery also has a lot more to offer than most monasteries in Tibet, as it is actually possible to learn more about the life of the Tibetan monks in this university monastery, and find out more about the way they live and the things they do. The monastery also has some more secret areas, which you can ask to visit if you know about them. The kitchens at Drepung Monastery are some of the finest in Tibet, not to mention the largest, and these vast rooms for creating the meals for hundreds of monks and lamas that reside in the monastery are the heart of monastic life.

Sera Monastery is also one of the three principal Gelugpa monasteries built in Lhasa. Its layout is very beautiful with cobbled alleyways, temples and colleges. It was founded in 1419 by Shakya Yeshe, a disciple of Tsongkhapa. Located northern part of Lhasa, it once housed more than 5,000 monks.

The highlight of visiting the monastery will be watching the monks’ debating in the shady courtyard behind its main temple. Every day, hundreds of red-robed monks assemble in small groups and practice their debating skills. It is a highly entertaining spectacle, during which they strike poses not dissimilar to hip hop rappers. They clap, turn, snap fingers, whoop, holler and throw their prayer beads about. In most cases, one monk sits on the floor, while another one stands, arguing about Buddhist rituals - immensely enjoying their debates. The spectacle is just so fun-filled and high energy. It's a bit like a Sicilian market place, or a football match, increasing in volume all the time, and some of the monks are really good showmen, sometimes mischievously involving you in their debates, as if trying to get you onto their side. 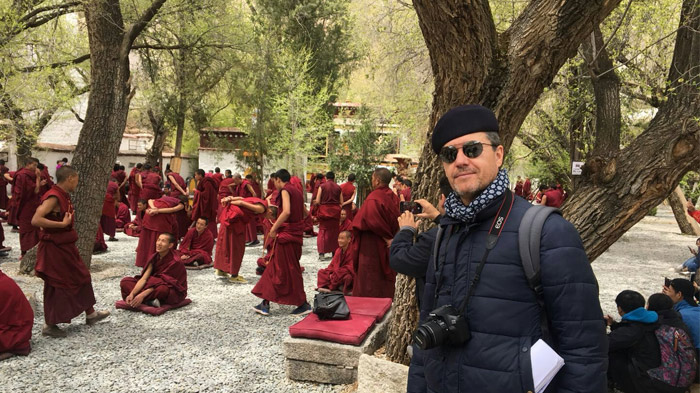 Our client was watching monks debating at Sera Monastery.

The monastery at Sera is also one of the major stores of precious Buddhist relics, and the great halls of the colleges hold a wealth of art, relics, scriptures, and sutras for the monks to learn from in their search for Buddhist knowledge. The monastery is also well known for its creations of Sand Mandalas, the Buddhist and Hindu images created from colored sands that depict the deities of the Buddhist or Hindu religions, made as a two-dimensional image of a three-dimensional environment. Sand mandalas are ritualistically dismantled as soon as they are created, once the ceremonial viewings have been completed, as a symbolic depiction of the Buddhist belief that all material in life is of a transitory nature. At Sera Monastery, you can watch as the great sand mandalas are both created and destroyed.

The tour of Drepung and Sera Monasteries is a full day tour, with breakfast and lunch included, as part of your complete package tour of Tibet. Starting from your hotel, your tour guide will collect you in the tour vehicle that is a part of your included tour services, and take you to the monasteries. The tickets for the entrance to both Drepung and Sera Monasteries are also included as part of the whole tour, and you will not be charged an additional fee for them.

As part of the One-Day tour to the monasteries, your lunch in one of the local hotels, usually recommended by your tour guide, will also be included, and you can enjoy the delights of real Tibetan cuisine and the delicious Tibetan Sweet tea at a real Tibetan teahouse, with local company.

As a whole, your tour in Tibet always includes many of the services that we provide, such as your welcome dinner, maps written in English, just in case your Google Maps is not working well enough, complimentary drinking water during your entire trip, oxygen tanks in the vehicles for the treatment of altitude sickness, your comfortable hotel accommodation (although this does not include single room supplements if you do not wish to share a room with another member of the party), and all your government taxes and service charges.

Your tour vehicle, which ranges from a five-seater vehicle to a mini-bus that can hold up to 29 people is also included, as are the services of both your driver and tour guide for the entire trip. The tour guide is knowledgeable, with good English skills and a friendly demeanor. However, while the service is included in the total tour cost, tips and service charges for the guide and driver are not included, so any tip would be given out of the kindness of your heart, and the depth of your pocket, for the excellent services they have provided you.

As well as arranging and providing your permits for entry into and travel around Tibet, we also include an insurance policy against accidents and casualties for the entire duration of your trip. The insurance policy is a Personal Travel Accident Insurance provided by a major Chinese insurance group, and covers mainly accidental death and disability, as well as a certain amount of indemnity for medical expenses at approved hospitals or medical centers. However, it is still a good idea to take out your own travel insurance before leaving home, as the cover falls under the Chinese insurance rules, and is not comprehensive.