How High Is Tibet: Altitude of Different Places in Tibet

Known as the roof of the world, Tibet has an average elevation of over 4,000 meters. Generally speaking, Tibetan altitude goes down from northwest to southeast. Take Ngari Prefecture in western Tibet as an example: The altitude reaches up to over 5,000 meters, as does the northern area of the Tibetan plateau. While the altitudes of Lhasa and Shigatse range from 3,000 to 4,500 meters above sea level, eastern Tibet and southern Tibet lie at heights of around 3,000 meters above sea level. Going down to the southeast, the lowest part would be at less than 2000 meters. That is the reason why Nyingchi Prefecture, in the far southeast, enjoys the reputation of being known as the “Swiss Alps” of Tibet. The following is a list of the altitude of different places in and around Tibet.

Altitude of the Most-Visited Cities and Towns in Tibet

Lying at an altitude of around 3,658 meters above sea level, the Tibetan capital is renowned as the highest capital city in the world. With a history that goes back around 1,300 years, roughly the same age as the famous Jokhang Temple in the center of the city, Lhasa is one of the most unique cities in the world. 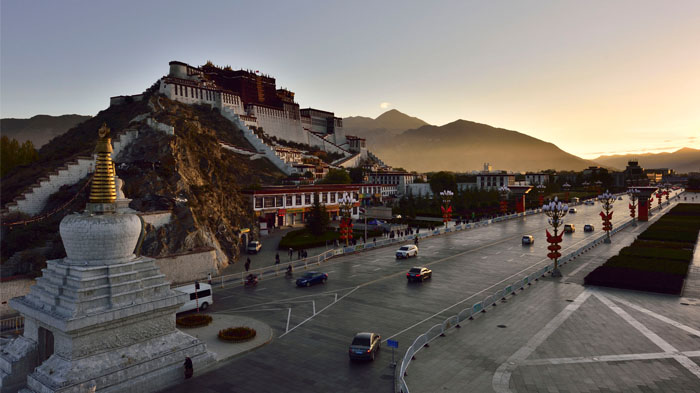 With an altitude of 3,658m, Lhasa is the spiritual heart of Tibet.

The city lies in a small basin of the Lhasa River Valley, and is surrounded by higher mountains and low valleys, with a network of rivers that run through the area. The city has numerous religious and cultural sites that are major tourist attractions for the visitors to the Tibetan capital, including one of the most famous, the Potala Palace. Lying on its own hill, around 300 meters above the rest of the city, this stunning red and white palace is the most notable landmark in Tibet, after Mount Everest.
>>Check the Lhasa travel guide and popular tours in Lhasa.

Lying on the historic trade route that linked ancient Tibet with India, Gyantse lies at an altitude of around 3,977 meters, and lies in the Nyang Chu Valley. Once the central hub of the trade routes from India through the Chumbi Valley, trade routes led west to Shigatse; across the Karola Pass into central Tibet; and east to Lhasa. 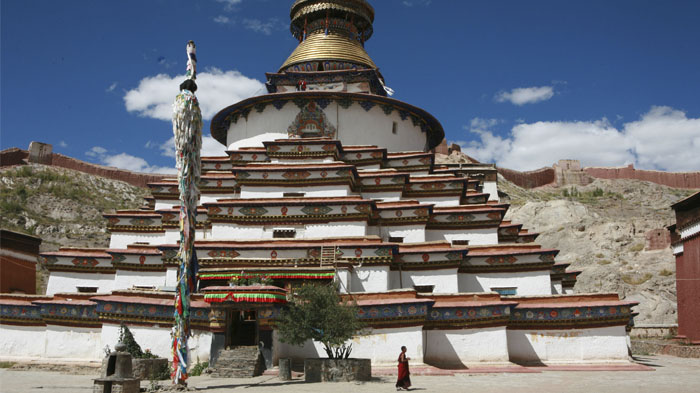 The iconic Kumbum stupa in Gyantse

Gyantse is renowned for its high fort, known as the Gyantse Dzong, one of the best preserved ancient Dzongs in Tibet, perched on a high spur of rocks above the town. Another famous landmark of the town is the spectacular Kumbum Stupa, the only one of its kind in Tibet. Standing 32 meters tall, this amazing 600-year-old structure lies in the Pelkor Chode Monastery, and features 108 chapels over its nine levels and is topped by an impressive golden dome.

Meaning “fertile land” in Tibetan, Shigatse sits on the plain that is formed by the confluence of the Yarlung Tsangbo and Nyainchu Rivers. Lying at an average altitude of around 3,840 meters, Shigatse has a highest altitude of 8,848 meters, at the summit of Mount Everest, which lies in the Shigatse Prefecture-level City on the Tibetan side of the mountain. Known as one of the world’s highest cities, Shigatse is the second city of Tibet, and lies in one of the most stunning natural landscapes on the planet. Shigatse, which has a history that dates back more than 600 years, is one of the ancient holy cities of Tibet and is the seat of the Panchen Lama, Tibet’s second highest incarnation. The seat of the Panchen Lama lies at the Tashilhunpo Monastery, on its hill in the center of the city, which was built in 1447 by the first Dalai Lama.
>>Check the Shigatse travel guide and popular tours in Shigatse.

Also known as Ganggazhen in Chinese, Tingri Town, often referred to as Old Tingri, lies in Tingri County of Shigatse Prefecture, to the west of the plateau’s second city. Known locally as Tingri Shelkar, this small town of less than 1,000 inhabitants lies at an altitude of around 4,300 meters, and is the turn-off on the Friendship Highway for those travelers heading for Mount Everest. 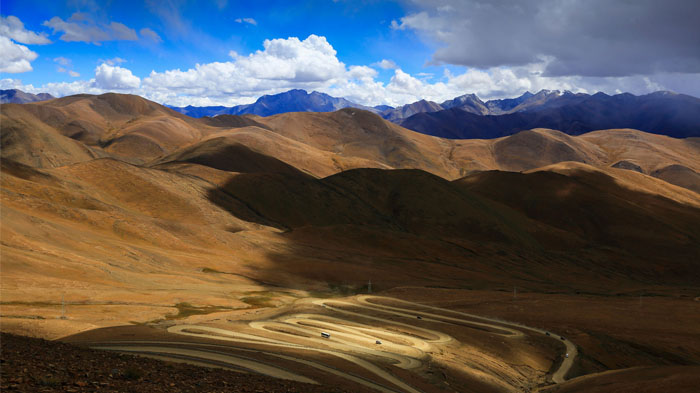 The incredible winding road to EBC.

The route, which covers around 100 kilometers, heads south and over the infamous Gawu La pass, at 5,250 meters above sea level to reach the renowned Everest Base Camp. Once an important trading post for the Sherpas from Nepal, this small town lies on the edge of the broad upland basin known as the Tingri Plain, which lies at an average altitude of around 4,500 meters. Above the town lies the ancient fort of the Shelkar Dorje Dzong, inside which lies the Shelkar Chode Monastery.
>>Check the classic Everest Base Camp tour.

Known variously as Yamdrok Yumtso or Yamzho Yumco, Lake Yamdrok is one of the Great Three Sacred Lakes of Tibet, the other two being lakes Namtso and Manasarovar. Lying at an altitude of 4,441 meters above sea level, more than 700 meters higher than Lhasa, this stunning and widely-spread lake is said to be shaped either like a fan or a Chinese character. 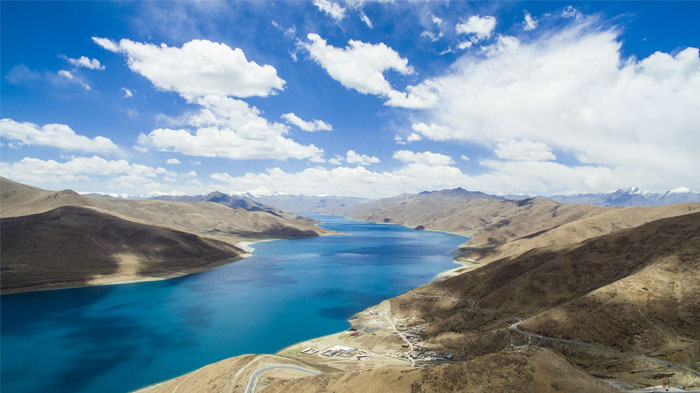 One of the few freshwater lakes in Tibet, Yamdrok is more than 72 kilometers long and covers an area of around 638 square kilometers of surface water. This beautiful lake is surrounded by mountains on all sides, which feed the lake from their snow-melt run off, with the Yarlung Tsangbo River valley just a short distance to the north. Getting to the lake from Lhasa requires traveling over the high Gampa La Pass, which sits at an altitude of around 4,790 meters.

The second of the Great Three Sacred Lakes of Tibet, Lake Namtso, also known as Lake Nam and Nam Co, is the “Heavenly Lake” in Tibetan. Located on the border of Damxung County in Lhasa and Baingoin County of Nagqu Prefecture, this stunning lake lies at an average altitude of around 4,718 meters above sea level. 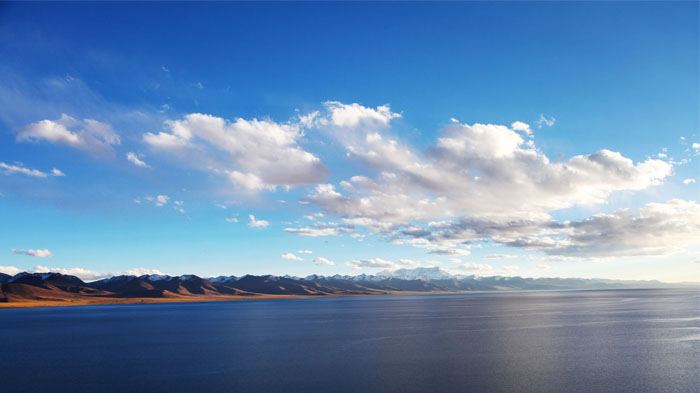 Getting to Lake Namtso from Lhasa means heading north on the Qinghai Tibet Highway and turning off to cross over the Nagenla Pass, which climbs up over the Nyenchen Tanglha Mountains, which separate the lake from the road and rail links to Tibet. The pass, which sits at an altitude of 5,190 meters above sea level, is one of the highest passes in Tibet, and gives you an incredible view of the Nyenchen Tanglha Mountains, as well as of the lake itself. Namtso Lake or Yamdrok Lake, which should you visit?

The third and most sacred of the Great Three, Lake Manasarovar, also known as Mapam Yumtso, is the sacred lake where it is believed that Maya Devi conceived the child that would later be known as Siddhartha Gautama, or Buddha. This stunning lake, which lies at an altitude of 4,590 meters above sea level, is revered in four separate religions as the holiest lake in Tibet. A freshwater lake in a land comprising mostly of salt lakes, Manasarovar is almost round in shape, and lies next to its bitterly saline twin, Lake Rakshastal. The lake lies in the alluvial plain of the Gangdise Mountains, and to the north of this sacred lake lies the most sacred mountain in the world, Mount Kailash.

Altitude of the Holiest Peaks in Tibet

Renowned as the most sacred mountain in the world, Mount Kailash, also known in Sanskrit as Kailasa and in Tibetan as Gang Rinpoche, lies in the Gangdise Mountains, part of the Transhimalaya, in Ngari Prefecture of Northwestern Tibet. The peak of this sacred mountain lies at an altitude of 6,638 meters above sea level, and is one of the few mountains in Tibet that remain unclimbed. 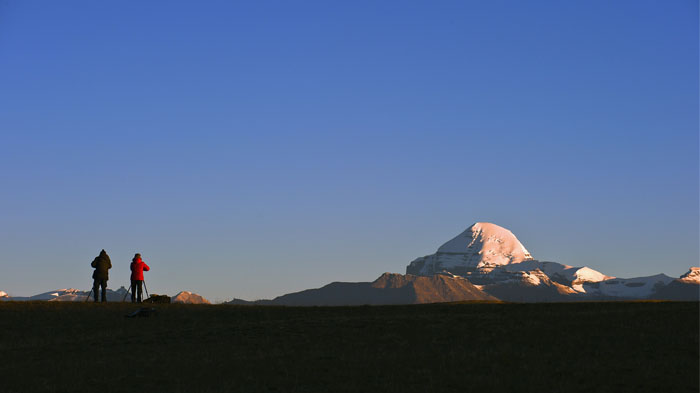 A sacred mountain in four religions – Hinduism, Jainism, Buddhism, and Bonpo – this holiest of mountains is known variously as the earthly manifestation of Mount Meru, the center of the universe, and the home of Lord Shiva and his wife, Parvati. Darchen, the village that lies in front of the mountain and from which all trekking tours depart, lies at an altitude of 4,575 meters, and the highest point of the famous Kailash Kora, the pilgrimage trek around the mountain, is at Dolma La Pass, at an elevation of 5,630 meters.

In the far west of Tibet, on the border with Nepal, sits the world’s highest mountain and the most popular tourist attraction on the plateau, Mount Everest. Known in Tibetan as Chomolungma and in Nepali as Sagarmatha, this stunning peak sits at an altitude of 8,844.43 meters above sea level. 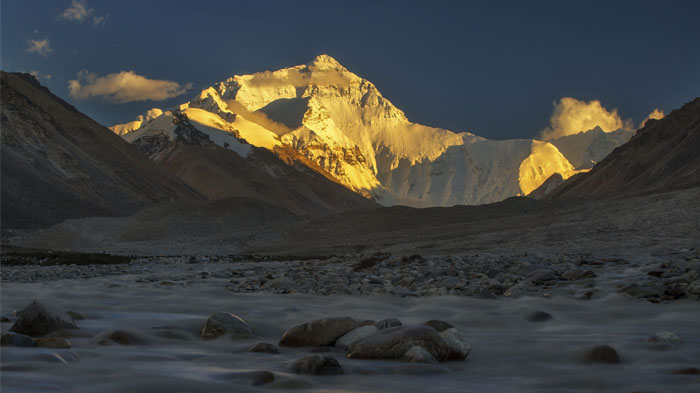 Mind-blowing vista of Mt. Everest in Tibet at sunset

First attempted in the 1920s, this high peak was not conquered until 1953. Named Everest after the former British Surveyor General of India, Sir George Everest, the mountain has one of the most delicate natural environments on the planet. Getting to Mount Everest also means heading over one of the highest passes in Tibet, the Gyatso La Pass, one of the highest mountain passes in the world, at an elevation of 5,220 meters. Views of Everest from the pass are some of the best in the world.

The highest peak of the Nyenchen Tanglha Mountain Range, Mount Nyenchen Tanglha is officially known as Nyainqêntanglha Feng and lies in the western part of the range, which forms part of the Transhimalaya. Located in Damxung County of Lhasa Prefecture, to the south of Lake Namtso, this beautiful and holy mountain lies at an elevation of 7,162 meters and is the highest mountain close to the Tibetan capital. The mountain is significant in Tibetan mythology as the deity the mountain is named for is considered to be the most influential in the area of northern Tibet. Often depicted wearing a satin dress and riding a white horse, Nyenchen Tanglha is the protector of the teachings of the Nyingmapa Tradition of Tibetan Buddhism.

The 14th highest mountain in the world and the only mountain above 8,000 meters that lies wholly in Tibet, the summit of Shishapangma is at an altitude of 8,027 meters above sea level. The last of the 8,000-meter Mountains to be conquered in the world, this stunning peak is also known as Gosainthān in Sanskrit, and the Tibetan name means “crest above the grassy plains”. The mountain lies just five kilometers from the border with Nepal, and has a subsidiary peak that also lies at more than 8,000 meters: Central-Peak at 8,008 meters.

How to Avoid Altitude Sickness for the First-timers to Tibet

While not everyone gets altitude sickness, most do, and fitness or age are no bar to feeling the symptoms, which range from headaches and mild nausea to severe dehydration, cramps, dizziness, and more. Rest is the best way to get over altitude sickness, and while acclimatizing, you should refrain from strenuous activity, as well as abstaining from alcohol, cigarettes, and strong coffee.

While traveling, altitude sickness can kick in again if you travel too high in a short period, and the general rule of altitude is to sleep at a lower elevation than you reached during the day. This helps to acclimatize further as you travel.

Tibet has altitudes that range in elevation from 1,800 meters to as high as almost 9,000 meters, and traveling in the region is one of the most spectacular tours on the planet. Sitting on the high-altitude plateau, Tibet is a land where high mountains can be seen everywhere you look, and stunning lakes are around every bend. Small wonder this region is known as the “Roof of the World” and the “Third Pole”.

0 Comment ON "How High Is Tibet: Altitude of Different Places in Tibet"