Tips of Potala Tours: Top Things to Do for Visiting Potala Palace

An architectural marvel, the Potala Palace is perched like a fabulous bird on the rocky “Red Hill” that is the highest point in Lhasa itself. This majestic Buddhist building, which is also Lhasa’s cardinal landmark and home to every Dalai Lama from the 5th to 14th, has attracted millions of tourists every year to catch a glimpse of its magnificence and stateliness. Here are many splendid attractions in it for you to be explored and fresh activities to be experienced.

As the symbol of Tibet, many wonders of Potala Palace worth appreciating:

By sightseeing all these highlights, you can trace back to old days and experience the glory of Tibet history.

The White Palace was home to ten successive Dalai Lamas and their courts. Also located there are the offices of the Tibetan government, governmental assembly halls, and other official offices. As you arrive on the roof, head right for the private quarters of the 13th and 14th Dalai Lamas. The first room you will see is the throne room, where the Dalai Lamas would receive official guests. Then the trail continues into the reception hall; next comes the meditation room, which still displays the ritual implements of the present Dalai Lama on a small table to the side of the room. And finally is the study of the Dalai Lama, which has some personal effects of the Dalai Lama on show, such as his bedside clock. The locked door leads into the Dalai Lama’s bedroom. But still now, the White Palace hasn’t been fully open to visitors and many of the rooms are inaccessible to visitors. 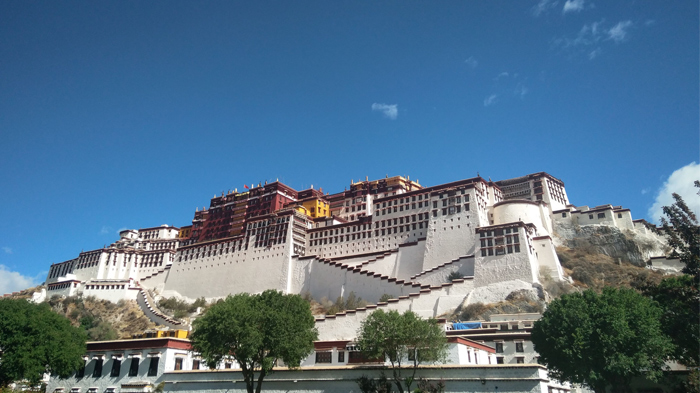 As the highest palace in the world at an altitude of 3700m, Potala Palace has totally 13 storeys with 117 meters in heights of its main building. To reach the Red Palace, you need to climb 365 steps from potala gate. Since steps are steep, you are not suggested to visit Potala Palace on your first day of arrival in Lhasa. Have a good rest or hang out to see other attractions of Lhasa on the previous day, you will find it easier to cope with the long steps and better enjoy the extraordinary view of Potala Palace. When climbing the steps, make sure to stop and rest a while. At the top of Potala Palace, you can overlook the beautiful scene of Lhasa.

As the higher one of the two palaces, Red Palace is made up of several chapels. It mainly includes three floors. The gilded Buddhas, intricate mandalas and towering tomb stupas you pass through the route rank as the highlights of the Potala.

Housed within the Red Palace are several mausoleums of previous Dalai Lamas from the 5th to the 13th made of gold. Among them, the mausoleum of the fifth Dalai Lama is of the most spectacularity. The largest structure here, a gold, pearl and precious-stone encrusted stupha over 40 feet tall, contains the remains of the great fifth Dalai Lama. It is overlaid with gold, diamonds, pearls, and many other precious gems, and expresses the high honor the people had for this Buddhist saint. 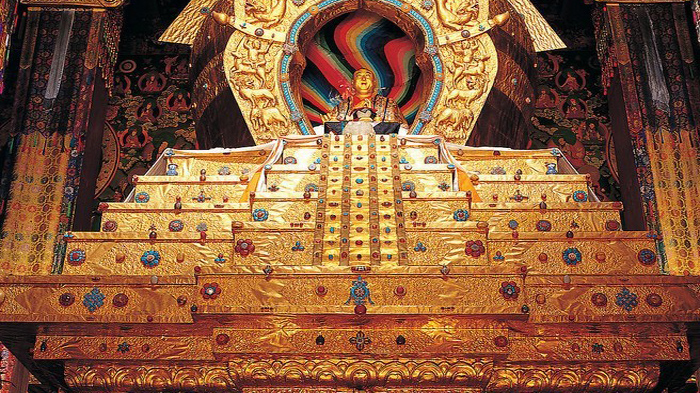 In the northwest corner of the third floor lies the most important chapel of Red Palace--the Chapel of Avalokiteshvara, also the Buddha of Compassion. Allegedly this is one of the few corners of the Potala that dates from the time of 7th century brought from India and has a history of more than 1,300 years. It is the most sacred of the Potala’s chapels, and the sandalwood image of Avalokiteshvara inside is formed naturally. It is also the most revered image housed in the Potala. The statue is accompanied on the left by the seventh Dalai Lama and Tsongkhapa, and on the right by the fifth, eighth and ninth Dalai Lamas. It’s one of the must-see chapels in Red Palace you should never miss.

Visitors are usually required to line up on the eastern Potala platform to enter the White Palace. During your waiting, just take time to have a picture with your friends and lamas. It will be interesting!

During your retracing from the Red Hill, it’s a good chance for you to enjoy a great view of the panorama of Lhasa City and vista of Lhasa Valley. Remember to take a picture and record this moment.

Potala Kora, also called as Tsekhor, is another popular kora that encircles the Potala, passing by an almost continuous circuit of prayer wheels, stupas, rock paintings and the Lukhang Temple (a small temple dedicated to the earth and water spirits, located on a small island in the lake on the back side of the Potala). There are also vendors hawking everything from Tibetan dresses to bars of soap. It’s one of the pleasures of Lhasa to wander along the prayer path, shopping, praying, chatting, and to look up to see another splendid view of the Potala. You can join in the local pilgrims to have a kora in the long corridor to make a sincere blessing for you and your family. 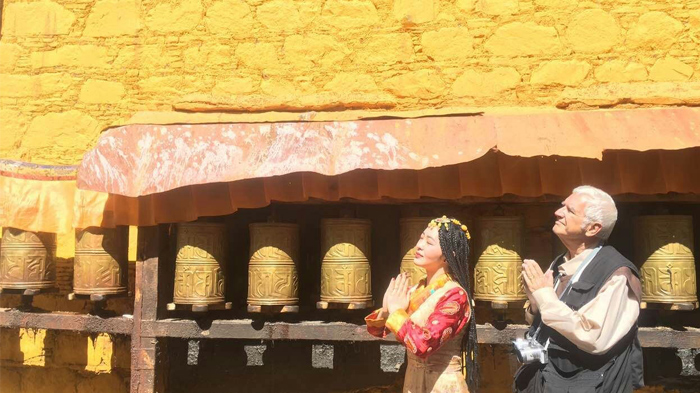 Take a Picture of Potala Palace at the Best Sites

Zongjiao Lukang Park is located adjacent to Potala Palace with bridges, lakes, birds, fishes as well as green trees and various flowers. It’s regarded by the local people as the best resort. Here you can not only take the best picture of the inverted reflection of Potala Palace from the lake but also spend your time leisurely to appreciate diversified birds and experience the lifestyle of local Lhasa.

Chakpori Hill (Yao Wang Shan) is another hot spot for shooting the panorama of this spectacular building. For many photographers, the Hill is always on their list in their tours in Lhasa. 50 RMB for a time of photographing, it’s worthwhile for you to take some wonderful pictures at the best view site.

>>Check All Best Places to Shoot Potala Palace in Lhasa

Apart from a tour inside the palace in the daytime, the view of Potala Palace Square at night is also fascinating. Return at night to see the palace under lights – just beautiful, peaceful and serene, you will find yourself in a mystic place like in a dream. Nice pictures of Potala Palace can be taken from the open square opposite the palace. Lights in the night will make colors more prominent and lovely. 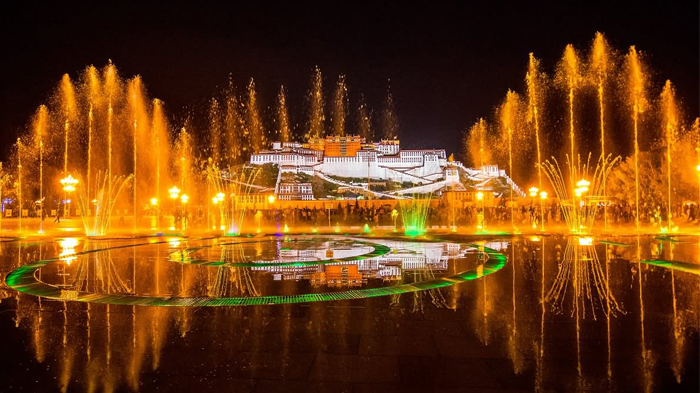 Take a Helicopter to Appreciate the Panorama of Potala Palace

In 2017, a new item in Lhasa tour was added. Tourists can take a helicopter to have a bird's-eye view of Potala Palace from top of the sky. It will be an unforgettable experience for you to have an overhead view of Lhasa city. If you want something fresh and exciting, just have a try. The 15-minutes ride on the flight will endow you a stunning view of the holy land.

Things to Be Noticed

To make your visit smooth and pleasant, here are some tips for you after entering Potala Palace:

As a holy palace of Buddhism, it has also attracted many local Tibetans come for pilgrimage. Just go ahead and take a picture with them. It will leave you unique memory.

Aparting from Potala Palace, many hot attractions in Lhasa are also waiting for you to be explored, such as Barkhor Street, Jokhang Temple, Sera Monastery, etc. Just tell us your interests, our experienced Tibet tour consultant will help you arrange the best tour according to your need.

0 Comment ON "Tips of Potala Tours: Top Things to Do for Visiting Potala Palace"