Tashilhunpo Monastery: never miss these highlights during your visit

Founded in 1447 by the first Dalai Lama, the Tashilhunpo Monastery is one of the largest monasteries in Tibet, and the seat of the Panchen Lama, Tibet's second highest incarnation. Located in the city of Shigatse, Tibet’s second city, this important cultural relic protection site is also the largest and one of the main four monasteries of the Gelug School of Tibetan Buddhism.

The name, Tashilhunpo, means "Auspicious Sumeru" in Tibetan, and the monastery lies on the southern slopes of the Nyiseri Mountain, to the west of Shigatse City. A major tourist attraction on the plateau, this unique monastery is a great place to visit, and a must-see attraction in Tibet. The monastery, while relatively new compared to many of the Tibetan Buddhist monasteries, has a long and varied history, and has been the victim of sacking on more than two occasions. Please follow our Tibet travel expert’s guide and find out the tour highlights you couldn’t afford to miss.

Tashilhunpo Monastery is one of the largest monasteries in the world, and has a wealth of things to see on the site. Consisting of six major halls within the 3,000 buildings that make up the monastery, which is the head monastery of another 51 monasteries across Tibet and mainland China, this vast temple once held as many as 5,000 monks and lamas.

Visit the Chapel of Jampa

As you walk through the monastery, bear to the left and you will come to the Chapel of Jampa, known as the Jamkhang Chenmo. The building was constructed solely to house the statue of the figure of Jampa, also known as the Maitreya Buddha or Future Buddha in Tibetan Buddhism. Built under the auspices of the 9th Panchen Lama in 1914, this impressive sculpture took more than 900 laborers and artisans around four years to create, and stands a huge 26 meters tall, towing over you like the Buddhist gods should. 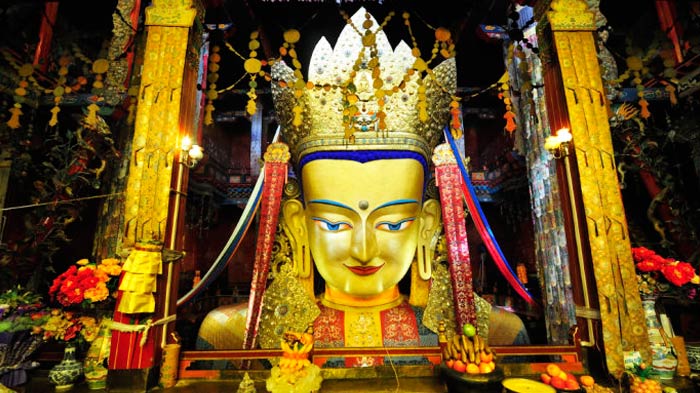 The huge golden statue of the Future Buddha in Tashilhunpo Monastery is the largest gilded statue in the world.

The Maitreya Buddha, or Jampa, is said to be the future incarnation of Buddha, who will come to save all life on earth when the Buddhist faith declines and Buddhism collapses on the earth. It is believed that this will happen around thirty thousand years after the death of the first Buddha, Gautama.

A vast statue, the fingers of the hands of the Jampa are around a meter long, and he is coated with more than 300 kilograms of gold coating, with hundreds of precious stones embedded into the surface of the statue. The walls of the chapel are covered with one thousand gold paintings of the Maitreya Buddha, set against a background of red paint.

Follow Tibetan pilgrims to walk the kora around Chortens

A beautiful kora walk that encircles the monastery at Tashilhunpo, this is a must-do for all tourists that come to Shigatse, and is an amazing experience you will not want to miss. The kora route is one of the longest around any monastery, largely due to the massive size of the Tashilhunpo Monastery, which has more than 3,000 buildings. The entire route is lined with prayer wheels at regular intervals, and it is up to you to choose whether or not to give them a turn as you pass. Just remember to turn them in a clockwise direction.

Explore the tombs of 10th and 4th Panchen Lama

The monastery holds the tombs of both the fourth and the tenth Panchen Lamas, which are well worth a visit. These ancient tombs are made from Chortens, and are religious reliquaries that hold the bones and remains of the sacred lamas of Tibet.

The chorten of the fourth Panchen Lama sits on the gilded roof of one of the chapels, and holds the remains of Lobsang Choekyi Gyaltsen, the teacher of the fifth Dalai Lama and the first lama of the monastery to hold the title Panchen Lama whilst still alive. Standing eleven meters tall, this funerary chorten is covered with around 85 kilograms of gold coating and embedded with dozens of semi-precious stones.

The tomb of the tenth Panchen Lama in Tashilhunpo Monastery.

The tomb of the tenth Panchen Lama lies in the chapel beneath the fourth, and is a dazzling chorten, plated with gold and studded with precious stones. The top of the tomb is set with the statue of the tenth Panchen Lama, and the ceiling of the chapel holds the image of the Kalachakra mandala. To the left is a painting of the deity himself, and the rest of the walls are painted with various images of Buddha, painted in gold and with different hand gestures.

The Tashilhunpo Monastery holds two colleges of Tibetan Buddhism, and for those that have an interest, you can go along to the colleges and listen to the student monks as they practice their dharma, chanting the Buddhist scriptures as a way of learning the sutras and mantras of Tibetan Buddhism. It is a hypnotic experience to listen to these strange mantras being chanted together by more than a dozen students, and it brings a feeling of relaxation to the soul as the chanting of the scriptures runs through you. 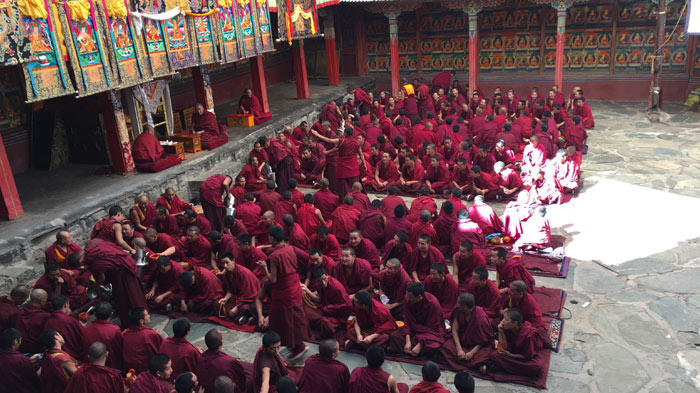 Monks are preparing for the regular debate at the Assembly Hall of Tashilhunpo Monastery.

The colleges also take part in regular debates in the debating courtyard to the side of the second college, the Philosophy College, where students and masters take part in heated and gesticulating debates about the philosophy and significance of Tibetan Buddhism, through the scriptures. The student puts forward his proposal, and the master refutes it. It is then up to the student to convince the master that he is right, or for the master to defeat his stance. The “loser” in these debates must accept the point of view of the winner. The debates can get very heated, and the debaters use expansive and emphatic hand gestures during the debates, often stamping their feet to make a point.

If you are planning a trip to visit the monastery, then why not make it a special trip to spend the three days in Shigatse for the Tashilhunpo Monastery Thangka Festival. The festival starts on the 14th day of the fifth month in the Tibetan calendar, and lasts for three days, with three to four different thangka paintings being displayed on the huge thangka wall behind the monastery. A major event in the Tibetan calendar, the festival and celebrations last for three days, and is an amazing time to be in Shigatse. Traveling to the monastery during one of the festivals is the best way to experience the real Tibetan religious culture first hand, and is a unique opportunity to learn more about the religion and people of Tibet. - Check the detailed itinerary of 8 Days Tashilhunpo Monastery Festival Tour

The kora route around Tashilhunpo Monastery is not just an amazing experience to walk with the many pilgrims that make the ritual walk every day. It is also one of the best places from which to view the entire valley below you, and the distant mountains of the Himalayas. From the top of the kora route, at its highest point, the view over the monastery and the city of Shigatse is the best that you will find, and it makes a great photo vista, with the monastery in the foreground and the city and mountains in the background. 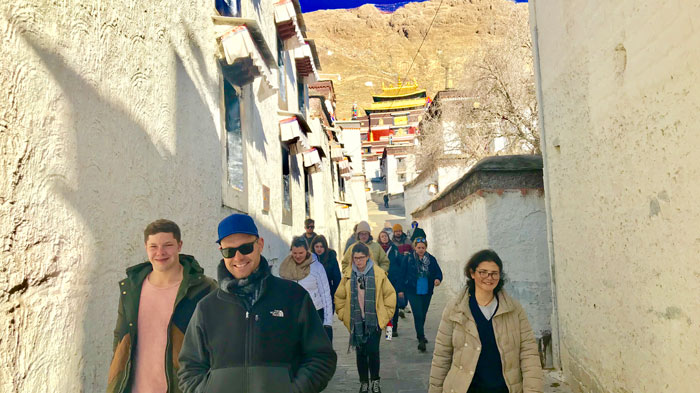 Our clients were experiencing Tashilhunpo Monastery Kora with local pilgrims.

The kora starts to the left of the entrance, in front of the main parking area, and is easy to find, just follow the pilgrims that are there every day of the year. The kora route is marked by a stone walkway that extends around the entire route, and the first part of the kora ascends through twists and turns up to the slopes of the mountain behind the monastery. The view from the top of the kora path out over the monastery and the city of Shigatse is one of the most beautiful morning views in the world, as the mists rise off the land below, burning away with the rising of the morning sun.

The descent heads in the direction of another nearby gompa, though it turns downhill before you get there, and continues down and around the front of the monastery to the parking area again, following the rode to the side of the monastery.

If you are planning a trip to Tibet, then you should never miss a trip to Shigatse and the Tashilhunpo Monastery. As one of the four main monasteries of the Gelug School, with the other three being Ganden Monastery, Sera Monastery, and Drepung Monastery, all of which are in Lhasa, this is the adventure of a lifetime, and a unique opportunity to visit one of the most famous monasteries in Tibet.

0 Comment ON "Tashilhunpo Monastery: never miss these highlights during your visit"