The Significance of Yaks for Tibetan People

Tibet holds its importance not only as the place preserving some of the best hiking spots and a place charming the tourists with its enchanting scenic beauty; it is also a habitat of thousands of wild animals and birds. Innumerable varieties of wild birds and animals have found refuge in the meadows and the mountainous regions of Tibet. 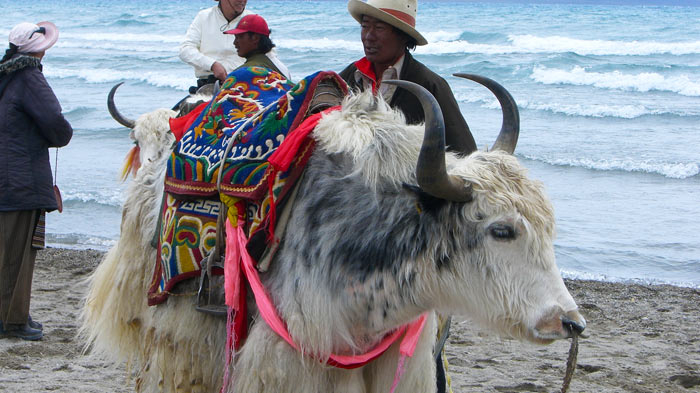 Amongst all these animals, Tibetan yaks are the most abundant, popular and useful. Both types of yaks are found in Tibet-wild and domestic. The features of these yaks are more or less same, but their behavior differs a great deal. Tibetan life depends a great deal on the use of the yaks for domestic purpose. Even if it is not a sacred animal, the Tibetan yak is considered to be the most important animal in Tibet.

Characteristics of the Tibetan Yak

As is known, the yaks belong to the family of the bison and water buffalo, known as Bovinae. Amongst the two species of yaks, namely the wild yaks and the domestic yaks, the former usually lives at an elevation of 13000 feet. They are protected quite cautiously after their exponential decrease in the number. 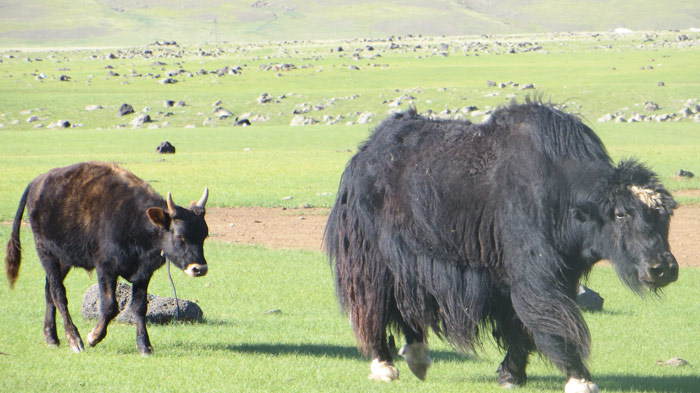 The wild yaks were first domesticated by the Qiang people of Tibet at about four thousand years ago. These wild yaks later formed the domestic yak that gradually spread all over to the North America, Europe and other parts of the world. These yaks have bulky physiology with strong well built legs that help them to climb up the steep elevations if many Tibetan regions, especially during hiking, carrying loads on the top of their body. The yaks are extremely furry that hang below their bellies even. The color variation can be stealthily observed as the yaks range from white to black to chocolate brown even. 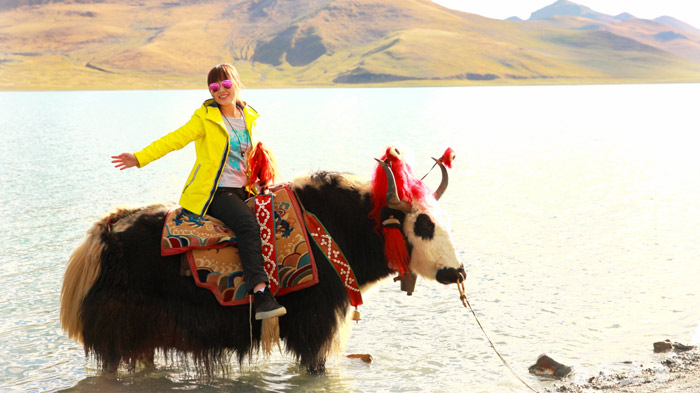 A girl is riding a yak.

All the species of the yaks have a distinct hump on the top of their body. These humps are the unique fat storage system that supplies the body with energy during the long absence of food. The male humps are usually bigger than the female ones. They have a very quite nature usually. They seldom make noise except for a low grunt like sound. That too, not all species are capable of doing.

They are totally capable of withstanding the extreme cold of Tibet, owing to their dense fur and the thick layer of fat underlining the epidermis. Also they possess larger lungs and heart to help them withstand high elevation. The red blood cells are also bigger to promote the oxygen supply more efficiently within the body, especially at high elevations. They usually feed on the foliages and rice remains provided to them. Owing to their strength and sustainability they are capable of carrying large amount loads for a longer period of time.

Importance of Yak in Farming

As has already been mentioned, Tibetan yaks serve a great importance to the Tibetan people, especially the nomads. The yaks serve as the important constituents to earn their livelihoods and carry on with their lives. Not only that, there are many festivals also related with the yaks as a matter of fact, to show its importance. The famous Yak Festival of Tibet, for example, is one such festival that occurs to show the importance of the yaks in the agricultural lives of the Tibetans. In this festival, the yaks are decorated by making them wear colourful clothes, placing colorful beads across neck or tying colorful flags along their horns and so on. This festival occurs in the fifteenth day of the eighth month of the Tibetan calendar. 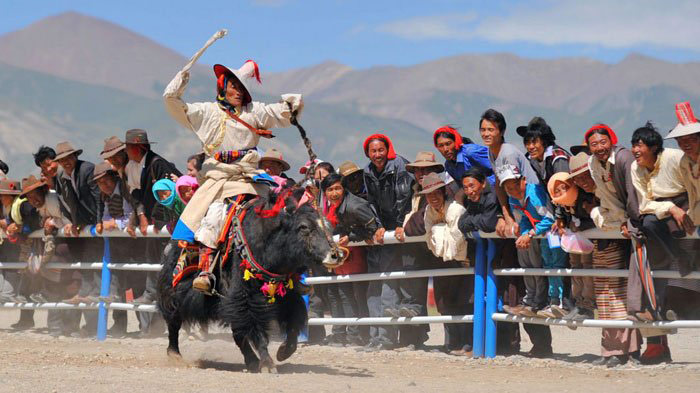 During this festival, the yaks are sacrificed for the Tibetan deities, almost raising the animal to the stature of God. It lasts for ten days and even sometimes a month. During this festival, the people indulge in as much enjoyment as possible. The yaks, prior to this festival are also fed properly. There even occur yak races and other small functions like reading scriptures. The whole festival involves a lot of expense and therefore it is held almost once in the century. Moreover it involves the ancestry celebration. Through the sacrifice, the people try to propagate the godly importance of the yaks in their lives. 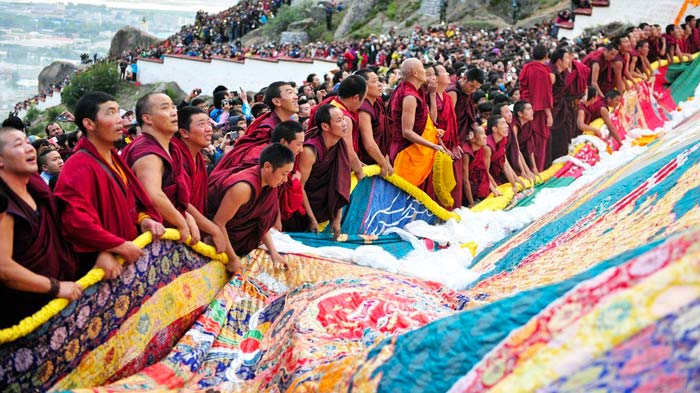 Not only in this trademark festival, but yaks are also used in the most popular Shoton Festival. After the three months of hard toils, the yak milk in the sour form is offered to the monks as a means of sacred diet. Thus the sour milk becomes an important dietary element throughout the course of the festival.

In the Litang festival also, the decorated yaks are used for racing and providing enjoyment to the people. The yaks are scattered almost in the whole of Tibet, however there are certain distinct areas where yak farming is in vogue. The tourists can catch a glimpse of yak farming in the ‘Yak House’ of Tibet where the animals are maintained well and the land is tilled very efficiently. In the Changthang region, the vast meadows are used accurately for Yak rearing. 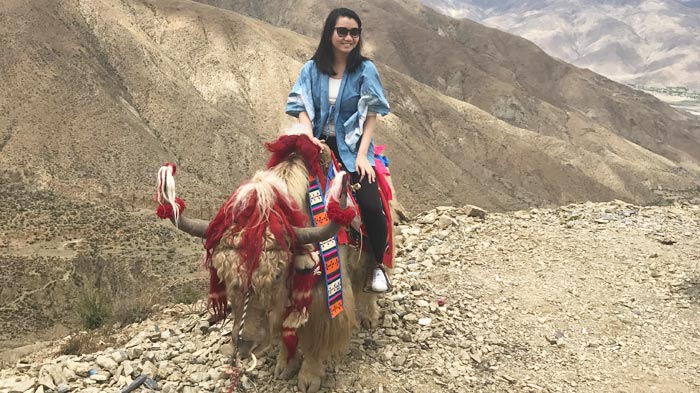 Riding the yak at the shore of Lake Yamdrok

Other cattle are also reared here, owing to the very suitable temperature and the abundance of foliage. Lhasa, specifically central Lhasa and Nyingchi also provide a meticulous view of yak farming. The lush green meadows of Nyingchi provide not only adequate but also nutritious food for the Yaks. Except for that, glimpse of Yak farming can also be observed near Yamdrok lake. But there the yaks are taken mainly to carry load and the dearth of foliage does not enable the yak rearing adequately.

The yaks are important for the Tibetans mainly because it is the only animal that’s almost all body parts can be use. The meat is considered to be the most economically significant product of the yaks. It is very nutritious, soft and juicy. Also the meat of the yaks are almost fat free and very healthy. It provides the people with a sweet and soft flavor being totally non-greasy. 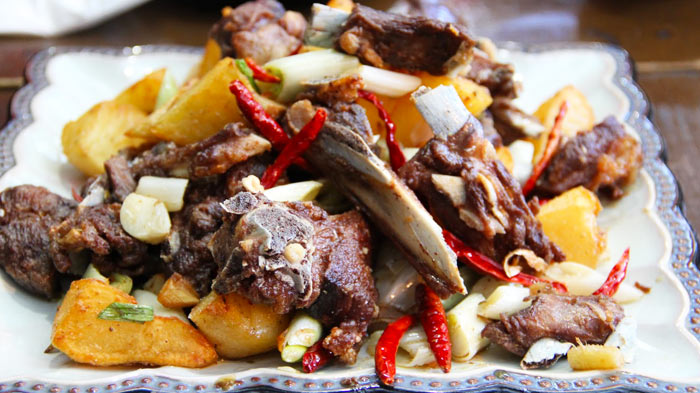 The meat of the yaks are nutritious, soft and juicy.

The wools are very significant for producing extremely warm clothes, especially in a country like Tibet where the winter is extremely harsh. Not only that, the yak wool is also an important constituent for export, raising efficiently the per capita income of the Tibetans. The yak milk is the chief item in the diet of every Tibetan people. It is used for making butter and cheese and other dairy products.Also the milk is extremely nutritious. The Tibetan milk is also used to make the kind of butter used in the butter lamp festival of Ganden monastery. Lastly the hides are processed to make some of the most high quality leathers, fuels and fibers. Sometimes the skulls and the tails are also used for medicinal purposes.

Tibetan yaks are not only animals providing them help in the agricultural view but also as load carrying animals. They are extremely useful for carrying heavy loads and luggage during the trekking in Tibet. Tibet draws maximum tourists owing to its high trekking facilities and remarkable tourist sites. Moreover the holy Kora routes are the attractions for a large number of pilgrims. The yaks ensure that in this trekking and hiking or kora hiking, they provide utmost comfort to the tourists or the pilgrims. Being extremely sturdy with strong legs, large red blood cells for proper transport of oxygen, they are capable of ascending high elevations without any problems. Therefore they are widely used to draw caravans or carry heavy luggage.

The Kailash kora trekking involves a total of 16 day journey including three days of kora ceremony. It is mainly a hiking to circumnavigate the holy Mount Kailash in order to show reverence towards it. The route is quite lengthy including the highest elevation of 4600 meters. The routes are tough including trekking sometimes trekking up to seven to ten hours and covering a distance of 505 km. This occurs mainly during the trekking from Saga to Paryang. 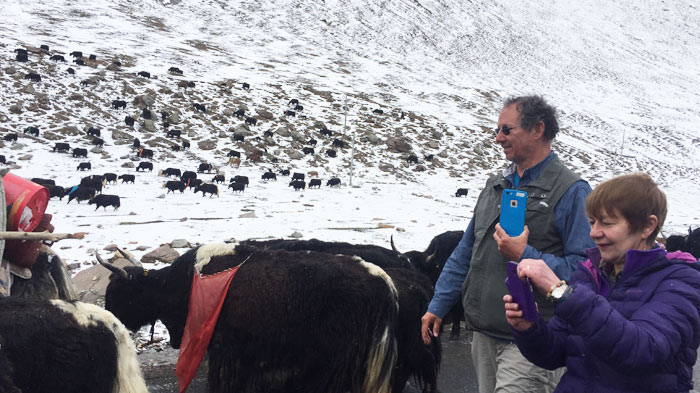 A couple is taking pictures of yak in Kailash Kora.

It is very important that you do not tire yourself out in the journey as it involves trekkings from Shigatse to Gyantse to lake Manasarovar including the in-between small treks. Hence it is better that you either do it in a caravan drawn by the Yaks or use the Yaks as the porters, for carrying your entire luggage.

The trek from Everest base camp to advanced camp is the toughest of all the treks in Tibet. It involves an altitude change from 5200 m to 6600m. The road is quite dangerous and involves a steep ascent. So it is better to transfer your entire luggage to the yaks than to carry it alone as it will easily tire you out, resulting in altitude sickness. Moreover if you carry yaks with you, sometimes you can ride the yak if you feel tired and also you will be able to carry the ingredients of your meals as getting proper meals is next to impossible in this trekking. 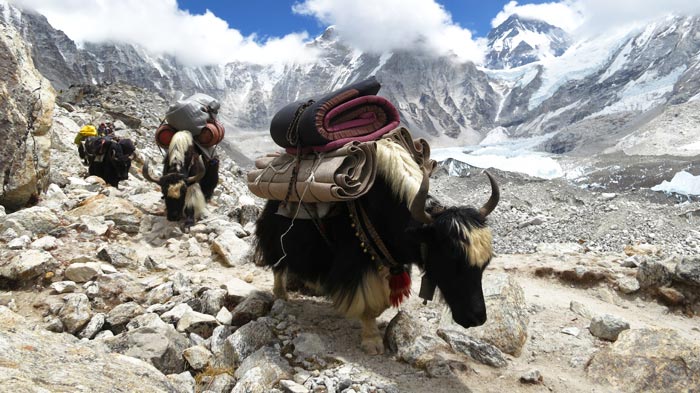 Therefore carrying your ingredient is always a better option especially if you are carrying yaks. Also many areas of trekking are not accessible by road, like on the way from base camp to intermediate camp, so you might need the help of the yaks and the guides to pass those points. Overall the yaks provide a lot of facilities in trekking.

Tasty Food and Souvenirs Made from Yak

The most important ingredients for tasty food from the yaks are its milk and meat. The milk when eaten raw provides immense nutrition, however it might tasteless approving. The skimmed milk on the other hand is very tasty and nutritious. The butter and the cheese made from the milk are very nutritious and are the treats to the tongue. From the yak meat, many ingredients are made. 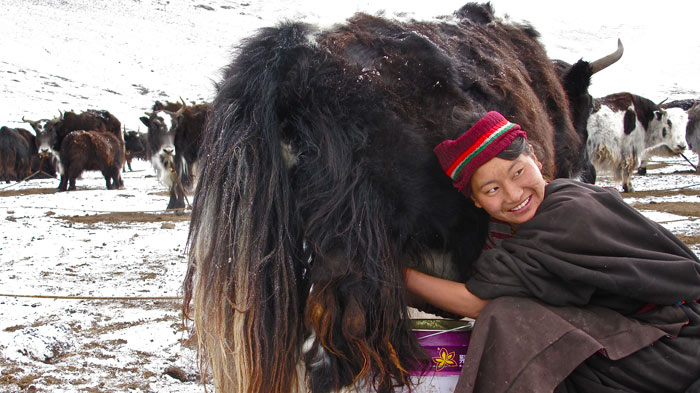 A tibetan woman is milking a yak.

There is an absolutely delicious product made from the meat known as the smoked meat. The meats are air-dried, then salt and preservatives are added and packed in the containers. Extremely soft and healthy sausages are made from the yaks. Also another favourite product from the yak is the corned meat. The meat is rubbed to make soft and salts are added. Then they are stored in cloth and fried after fifteen days, after adding condiments. Another special food product derived from the yaks is the beef jelly which is also absolutely tasty. Except for these products, dried canned meats are also very popular products from the yaks.

The souvenirs from the yaks include the exquisite fur clothes made, which are extremely stylish. Also the bones are used for making combs, handicrafts and ornaments and buttons. The furs are also used to make the ropes for tying the tents. These materials can be found in many areas of Tibet like Nyingchi and Lhasa, particularly in Barkhor Street markets. Even the hand fans that serve holy purposes are made of furs derived from the yaks.

0 Comment ON "The Significance of Yaks for Tibetan People"