Shigatse to Everest Base Camp: how far and distance, road condition, what to see along the way

Way out in the west of Tibet lies the world’s highest mountain, Mount Everest. Sitting astride the border between China and Nepal, Mount Everest is one of the most popular tourist attractions in Tibet, with hundreds of thousands of visitors traveling there every year. In contract to the base camp in Nepal, the northern Everest Base Camp (EBC) in Tibet is more easily accessed by road, making it more accessible and a huge attraction for travelers to Mount Everest to come to Tibet.

Northeast of this massive peak, around 243 kilometers as the crow flies, lies the city of Shigatse, the second city of Tibet after Lhasa, the regional capital of Tibet. This stunning prefecture-level city is one of the most historic sites in the region, and is the home of the Tashilhunpo Monastery, the seat of Tibet’s second highest Buddhist incarnation, the Panchen Lama. For anyone traveling to Mount Everest from Lhasa, Shigatse is the gateway to the Chomolungma Nature Park and the mountain itself.

Shigatse to EBC Distance: 343km and How to Travel

As the crow flies, it is a mere 243 kilometers (151 miles) from Shigatse to the summit of Mount Everest. However, the base camp lies around 12 kilometers to the north of the summit, at the foot of the Rongbuk Glacier.

By road, it is around 343 kilometers from the center of Shigatse City to the base camp, a route that is popular for tours of Tibet that are heading for the mountain. It takes around 6 hours 20 minutes of constant driving to get to the base camp, which can be done in one go, usually the day before you will actually visit EBC itself. Most tours stop overnight at the Rongbuk Monastery, around 8km from the base camp and continue on to Everest in the morning.

For most of the route, the road is in pretty good condition. From Shigatse to Tingri, the route follows the G318 National Highway, also known as the Friendship highway in Tibet, which is possibly the best road surface in the region. From Old Tingri, where you turn off the G318 to head to Mount Everest, the road condition varies, from good tarmac to some gravel stretches, though those are getting fewer and fewer each year as the roads are slowly upgraded. 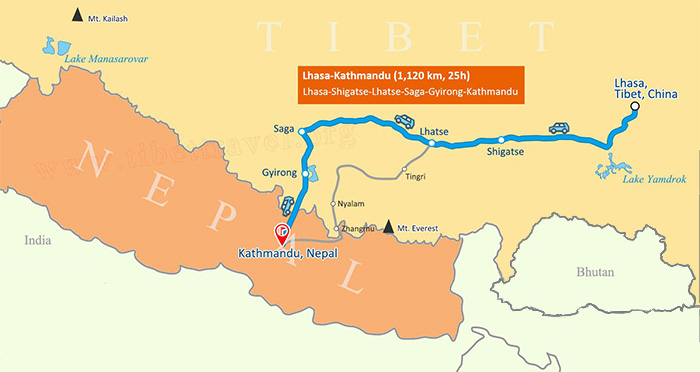 (Simple click to enlarge the map)
Travel overland to EBC, Shigatse from Lhasa and Kathmandu

Lying on the border with Nepal, there are two main routes to get to Mount Everest. The first, and most used route, starts in Lhasa, and runs through Gyantse to Shigatse. The route from Lhasa to Shigatse follows the G318 Friendship Highway, either turning off to detour through Gyantse or traveling straight to Shigatse City. From Shigatse, the route along the Friendship Highway continues for around 242 kilometers to Old Tingri. From there, the Zhufeng Road turns off south for another 100 kilometers to Rongbuk and then to EBC itself.

If you are traveling EBC from Kathmandu in Nepal, then the route comes a different way as far as Old Tingri. From Kathmandu, you get a local bus to the border at Rasuwa Gadhi, where you will cross to Gyirong Port and meet your guide and driver. From Gyirong Port, the road takes you north to Gyirong, and then heads eastwards past the Paiku Lake along the G214 National Highway until it meets the G318. From there, you follow the Friendship Highway east as far as Old Tingri, then turn off on the Zhufeng Road to get to the base camp. The total distance from Gyirong Port to EBC is around 362 kilometers, plus around 120 kilometers from Kathmandu to Rasuwa Gadhi on the Sino-Nepal border.

Things Not to Miss along the Way from Shigatse to EBC

The road from Shigatse to Everest Base Camp is one of stunning landscapes and fantastic scenery, with a wealth of things to see and do along the way.

The G318 National Highway, of which the Sino-Nepal Friendship Highway is just a small part, stretches from Shanghai in Eastern China to Zhangmu in Western China, on the border between Nepal and Tibet. While the final stretch of the road to Zhangmu is no longer used, due to the earthquake of 2015, this vast road spans a total distance of 5,476 kilometers across the entire nation, from east to west. It is the second longest national highway in China, and the seventh longest highway in the world. 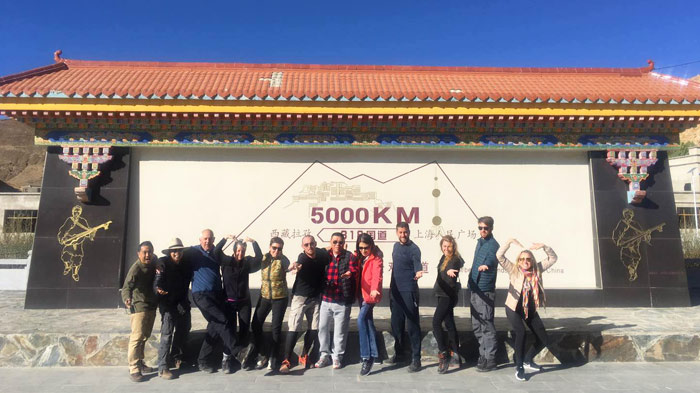 Making a stop at G318 National Highway while traveling to Mt.Everest.

At the 5,000-kilometer mark, far out in western Tibet, a monument has been built at the side of the road, to commemorate what was once the longest road in China. At the time it was built, this 5,000-kilometer monument marked the longest single highway ever built in China, and is a testament to the ingenuity of the Chinese road builders, completing such a massive feat up to the heights of the Tibetan plateau. The monument makes a great place to get an historic selfie on the way to EBC.

Around 127 kilometers to the west of Shigatse, on the road to Old Tingri, lies the stunning Sakya Monastery, the seat of the Sakya School of Tibetan Buddhism. Founded in 1073 by a monk of the Nyingma School who came from the powerful nobility of Tsang, the monastery soon became the seat of power in Tibet, and the abbots of the monastery governed the region throughout the 13th and 14th centuries. 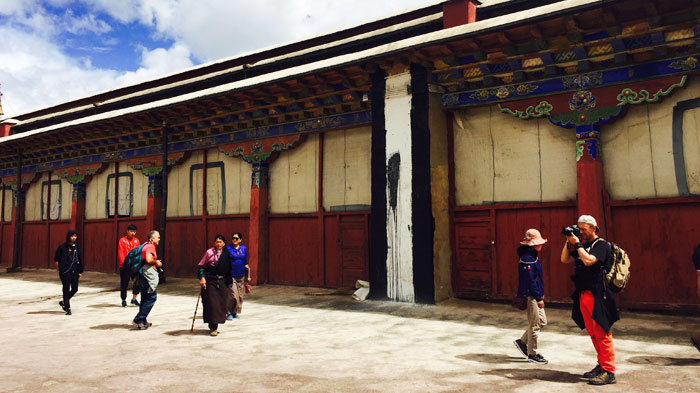 Visiting Sakya Monastery, the seat of the Sakya School of Tibetan Buddhism.

While little of the original buildings remains, following the rise of the Kagyu and Gelug Schools that overcame the Sakya rule of Tibet, the Mongolian architecture of the original Lhakang Chempo demonstrates the huge difference in later Tibetan architecture, which was more profoundly influenced by India and Nepal. The monastery originally held more than 500 monks, but there are now less than 50 in residence there. The old Lhakang Chempo once housed one of the greatest libraries in ancient Tibet, and the shelves lining the walls of the Lhakang were filled with massive volumes of Tibetan Buddhist scriptures, some as high as six feet tall, covered in gold lettering, and bound with iron.

A common tool among the Tibetan people, the long knife that often hangs from their belt is as much a part of the traditions of Tibet as Buddhism itself. And while there are now many types and brands of knives in Tibet, none can ever match the standards and quality of the old Lhatse Knife. Recognized across the region as the primary brand of knife in Tibet, they are held in high regard, and many people would travel hundreds of kilometers to purchase a knife from the forges in Lhatse. The most unique thing about the Lhatse Knives, aside from being the strongest and sharpest knives in Tibet in ancient times, is their magnetic qualities, which are forged into the blade when smelting the iron into steel. 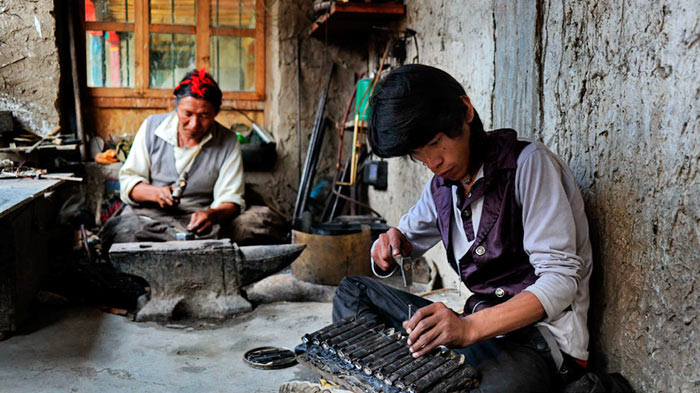 Nowadays, there are only two people that have inherited the craft of forging the Lhatse Knives, and both reside in Shigatse, in the town of Lhatse, 152 kilometers to the west of Shigatse along the Friendship Highway. The workshops there are still used to make the Lhatse Knives, and one knife takes around seven days to forge and craft. The handles and scabbards are decorated with intricate filigree, and have the eight auspicious symbols carved into them. The blades themselves are forged with hardened steel along the cutting edge and softer steel along the back, to allow both flexibility and sharpness within one blade.

One of the most spectacular views of the trip to Everest Base Camp is the view that you get at the crest of the Gawu La Pass. At an altitude of around 5,198 meters above sea level, the top of the pass offers you one of the best views of Mount Everest in Tibet. The pass is strewn with Tibetan Buddhist prayer flags, tied to just about every post and railing that you can find. But that is not the best thing about the crest of Gawu La Pass. As you look towards Mount Everest, you get an awesome panoramic view of the central Himalayas, including the peaks of four other mountains that sit at more than 8,000 meters: Mount Makalu, Mount Lhotse and Mount Cho Oyu and Mount Shishapangma. 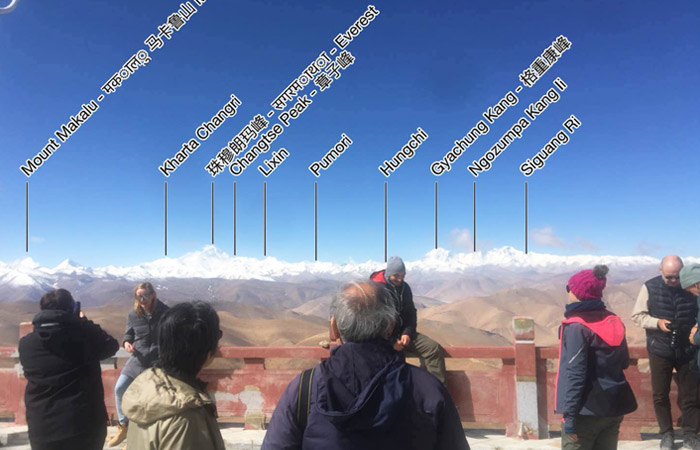 Enjoying the panoramic view of the central Himalayas.

The Gawu La Pass is the last high pass you will head over on the way to Mount Everest, and once you are finished admiring the view, you will take the road down the other side, which is one of the most thrilling rides in Tibet. The road is noted for being one of the windiest roads in the region, switching back and forth down the mountainsides, with hairpin bends at each turn.

Do Meditation at Rongbuk Monastery and Enjoy Vista of Mt. Everest from Rongbuk

Rongbuk Monastery is not just the closest monastery to Mount Everest, it is also the world’s highest monastery, at an elevation of 4,980 meters. Lying just a few kilometers from the Everest Base camp, the monastery was founded in 1902 as part of the Nyingma School of Tibetan Buddhism, and once housed hundreds of monks and nuns. 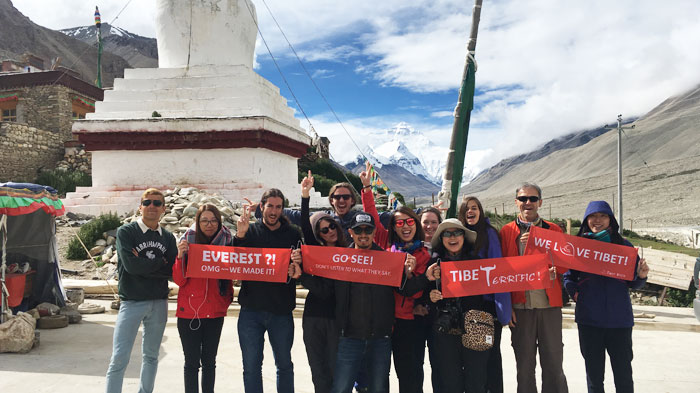 Our clients are enjoying the spectacular view of Mt.Everest from Rongbuk Monastery.

Prior to the monastery being built, the site was a special meditation place for Buddhist monks and nuns, and the caves along the sides of the Rongbuk Valley were used for their retreats to meditate on their journeys towards enlightenment. These caves are still there, and a short walk from the monastery takes you to them, where you can enter the caves to look around, and even spend some time in meditation or contemplation yourself.

Rongbuk monastery is strategically situated to give you one of the best views of Mount Everest in the world. Aside from the view from EBC, the view from the small hill behind the monastery is a stunning shot, and the best time to take the photos is at dawn, as the sun rises and turns the eastern slopes of the mountain a burnished orange color.

0 Comment ON "Shigatse to Everest Base Camp: how far and distance, road condition, what to see along the way"