What is Monk Debate?

Monk debate is a form of discussion of Buddhist knowledge which originates from India. It’s also a kind of method for monks to learn. As a challenging discussion, the two sides often debates drastically. Debaters often employ various gestures to enhance the intensity of the debate. They either rush to urge the other party to answer the question as soon as possible, or pull the beads as a way in resorting to the power of the Buddha to defeat each other. 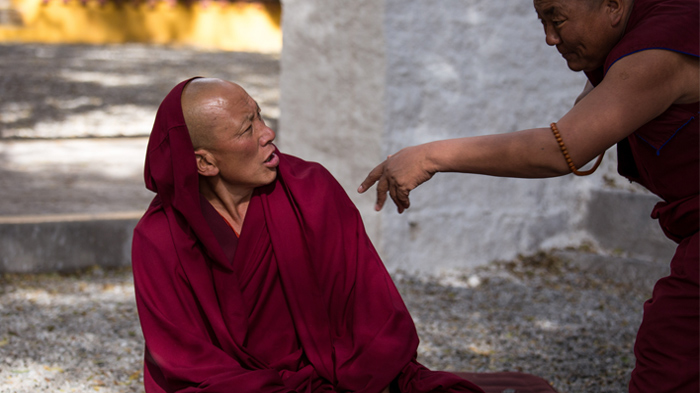 Monk debate is the highlight of Sera Monastery

If one side is cornered, beholders will “boo” to him loudly, and the defeated one should put off his hat until he defeats the other side in the following rounds. During the debate, debaters are only allowed to answer “Yes” or “No” or “Uncertain” and shouldn’t bosh to muddle through. Therefore, it’s easy to find out who is the winner. To those visitors who even don’t know Tibetan, the whole procedure will not be boring. Aggressive momentum and dramatic gestures are attractive enough to make the visitors deeply infected.

Buddhism debating is the best featured activities in Sera Monastery. This exemplary debating tradition supplemented with gestures is said to be exclusive to this monastery, among the several other monasteries of Lhasa.

The debate among monks is held in the presence of their teachers, with a very well set rules of procedure for the defender and the questioners. Like a routine, the debating is taken place at the debating courtyard at 15:00 clock. Before debating, the monks are divided into two pairs in equal rank, with one standing (questioners) and one sitting (defenders). Also there are some small groups with one standing and others sitting to answer. 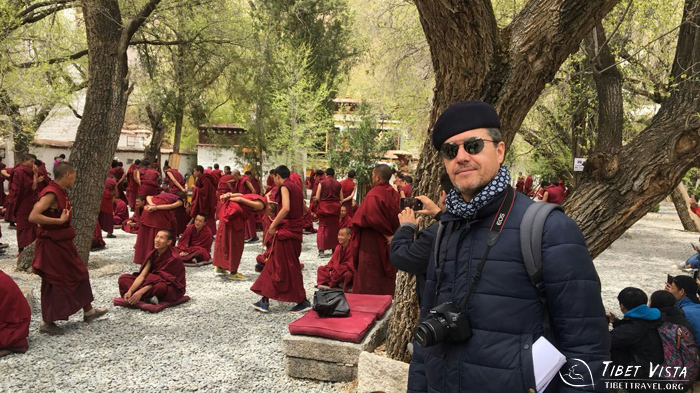 The debate opens with an invocation to Manjusri Buddisattva recited in a loud and high pitched tone. The roles of the debater and the questioner are well defined: the questioner has to succinctly present his case related to Buddhist topics and the defender has to answer within a fixed time frame. In the limited time, the defender should prove his point of view on the subject proposed for debate. If the defender fails to reply within a time frame, an expression of derision will be witnessed. During the debating sessions, no role for an adjudicator is set. When there is obvious contradiction in the defender’s part, the outcome will be formally decided.

Every weekday afternoon from around 3pm to 5pm, you can hear monks debating ardently with hands clapping as you approach Sera. During the debate, you’ll see monks debating vigorously by employing some gestures which enliven the ambience of the occasion. Each gesture has the different meaning and some of the gestures are said to have symbolic value. 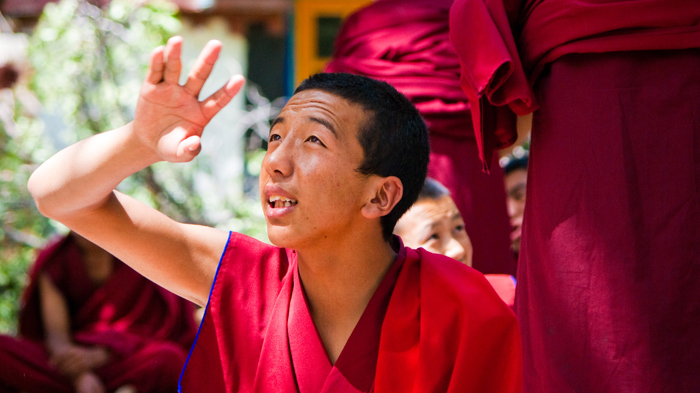 Generally, you can see some typical dramatic gestures during the debate: clapping hands, which means that the questioners are going to ask a question, or urge the defenders to answer the question quickly; clapping hands loudly to stress the power and decisiveness of the defender’s arguments denoting his self-assurance; touch Buddha beads means that wishing for an inspiration from the Buddha; and in case of wrong answer presented by the defender, the opponent gestures three circles with his hand around the defenders head followed by loud screaming to unnerve the defender; if opponents have a mistake, it is demonstrated by wrapping his upper robe around his waist; when the defender wins the debate, he will make an allegorical dig at the questioner by questioning his basic wisdom as a Buddhist, and so on.

Loud clapping and intense verbal exchange is common during the debate, and all those expressions have also some deep meanings to imply the Buddhist philosophy, like discarding distracting thoughts and wake up your mercy and wisdom by the sharp bursts of clapping.

Notes for You to Watch Monk Debate

1. Debate courtyard is at the northern end of the passage way from the front gate, and the road towards it has steps and need a short hike to get to. If you want occupy a better location among the countless crowds, please go in advance.
2. To show your respect in this holy place, please try to keep quiet and don’t speak or laugh loudly.
3. Visitors are not allowed to enter the rubble bedding debating area.
4. Taking photos are permissible, but you should pay extra fees and are only allowed to use mobile phones instead of cameras.
5. Monk debate in Sera Monastery is held every day afternoon from Monday to Saturday, but not in Sunday and some special festivals.

Actually, you can visit Sera Monastery all year round, but we recommend you to go there during two important Tibetan festivals if you had the chance: Shoton Festival and Sera Bengqin Festival. The grand religious ceremonies and colorful civil activities will enlighten your Tibet tour.

Shoton Festival is one of the most important and attractive traditional festivals in Tibet which is celebrated at June 30th in Tibetan calendar every year(around the last ten day of August in solar calendar. 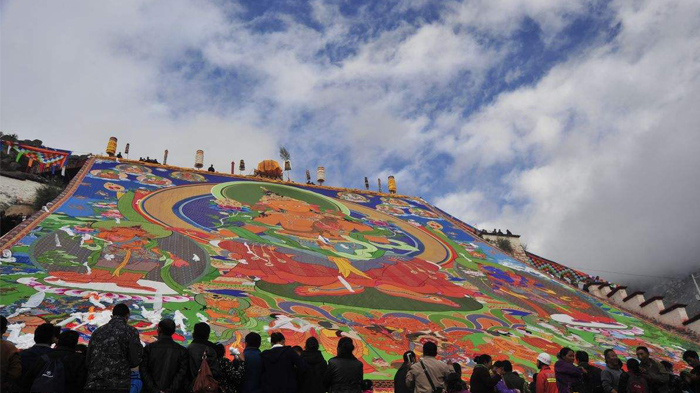 The grand ceremony of sunning the Buddha

During that time, full of ethnic songs and dances along with famous Tibetan operas will be performed at Norbulingka Palace, and hundreds of thousands of Tibetans gather at Drepung Monastery and Sera Monastery to see the famous Buddha Thangka. Highlight of the festival -- The grand ceremony of sunning the Buddha -- will be held in Sera Monastery during that time. Never miss it.

Sera Bengqin Festival, also known as the “Blessing of the Dagger of Exorcism”, is a typical religious festival in Sera Monastery held on December 27 of Tibetan calendar for hundreds years, and it is largely attended by monks and devotees. At that day, tens of thousands of Tibetan Buddhists from Tibet Autonomous Region and its neighboring Tibetan-dominated regions will trek to the monastery for the annual ritual.

As a tradition, the pilgrims hold pure white Khada in hand and pray while moving slowly in the long line outside the monastery and eventually proceed to Vajra Pestle, a treasure of the monastery, for blessing offered by Dalai Lama. Thereafter, the Pestle is briefly placed on the heads of the monks and disciples by the Khenpo (president). It’s believed that celebrating the festival and being touched by the Vajra Pestle can ward off disaster and hardship and bring happiness and wellbeing in the coming year. Nowadays, as a big festival before the Tibetan New Year, it will last 24 hours for a whole day.

1. Chapels of the Sera start to close at 3pm, so it makes sense to see the monastery chapels before heading to the debating.
2. There are many antique murals in the chapels, and it’s better for you to bring a flashlight. Interior photography costs ¥15 to ¥30 per chapel.
3. Do not take photos with the slogan of“No Photos”in Sera Monastery.
4. If you are a photograph-lover, there is a rock land behind the halfway mountain where you can shoot the panorama of this monastery, especially when the night falls. Along the way, watch out the winding narrow road and be careful.
5. Please dress respectfully in the monastery and do not hustle around.