As the sacred places of Tibetan Buddhism, Jokhang and Ramoche temples are most famous attractions, a great number of pilgrims come these places every year, worshiping devoutly and even giving all of their savings to temples. There are only three Sakyamuni’s statues in the world, among them, the 8-year-old is in the Ramoche Temple and the 12-year-old is in the Jokhang Temple.

The Jokhang Temple has the most transcendent sacred position in Tibetan Buddhism, it is located in the center of old town, surrounded by Barkhor Street( the street is like a circle shape),some Tibetans even regard it as the center of the universe. The name of the Jokhang Temple is "Jue Kang" in Tibetan, that is, "Buddha's house". It was built at the greatest prosperity of Tubo Dynasty, by Emperor Srongtsen Gampo, built for his first wife, Princess Chizun from Nepal. 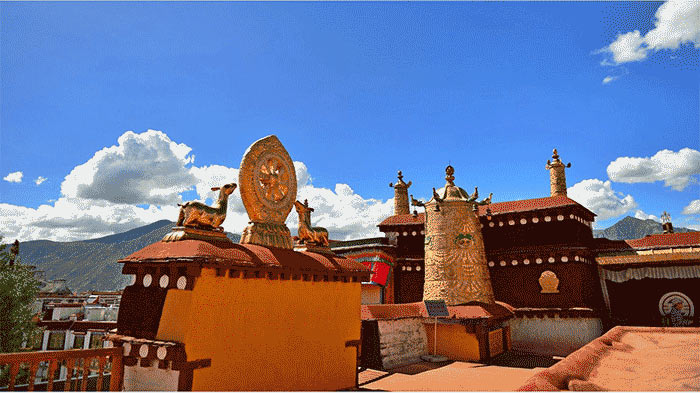 The scene on the roof of Jokhang Temple

The earliest buildings in Jokhang Temple start from the main entrance (the outer courtyard was built and expanded later). After entering the main entrance, there is a wide opened courtyard that many large praying gathering would be held in the past. Coming out from the courtyard is the Ticket Office, there are stairs extending to the second floors. On the right side of the second floor is the Srongtsen Gampo Hall, where stand the statues of Srongtsen Gampo, Princess Wencheng, Princess Chizun and others. Visit at the right time as it’s only opened in the morning.

The main Buddha hall is four-storey high with side halls on both sides which was built more than 1400 years ago. The whole structure reflects the ideal mode of Mandala city in Buddhism. There are 380 prayer wheels around the hall, one next to another, walking while pushing them is something that many devout believers must do.

The 4,000 square meters Ramoche Temple is located in 500 meters north from Barkhor Street. The scale is not as big as the Jokhang, but it’s very distinctive. According to the legendary, when Princess Wencheng with her servant were on the way to Lhasa, a carriage with a Buddha statue sank into mire deeply and no matter what they do, it didn’t move, Princess reckoning from the geography, this place is the palace of dragon, so they used four upright poles covered with white silk to hold this statue, after one year, the whole construction had been completed. The front part is a courtyard, back are the temples and gate house, the gate house is three-storey high and the bottom is a spacious hall where preserve the murals of four heavenly kings and the six life transmigration.

This beautiful park is situated at the back of Potala Palace. When expanded the Potala in 17th century, a large amount of earth was taken from here, too much water gathered and eventually became a lake. During the period of the Dalai Lama VI, he built up an attic on the island and an arch bridge to connect the isolated island to the outside world. Because of the special geographical location, this park has been the best place of taking inverted images of the Potala Palace, so if you have time and want a perfect angle of Potala Palace, don’t miss this. - Finding Best Places to Shoot Potala Palace in Lhasa 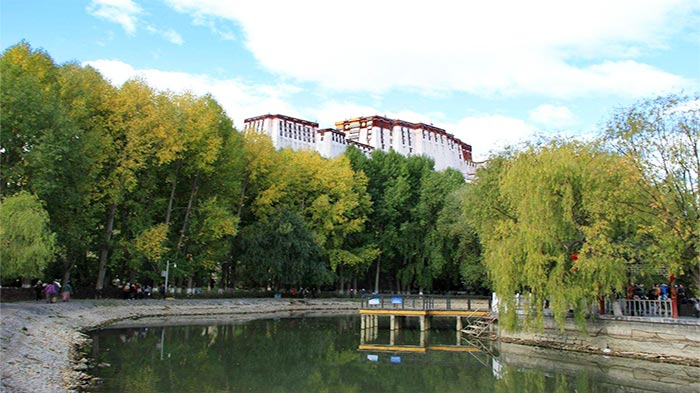 This is a typical Tibetan-style garden, located in the west suburb of Lhasa. Right on the Norbulingka Road, the beautiful garden was built in 1840s. And for years, it has been used as the place for Dalai Lama to spend the summer. After more than 200 years of expansion, the whole garden takes an area of 360,000 square meters with more than 100 species of plants, including some exotic flowers and herbs from the Northern Himalaya, as well as many precious flowers from the mainland or abroad. Also a great number of exquisite relics are preserved inside. 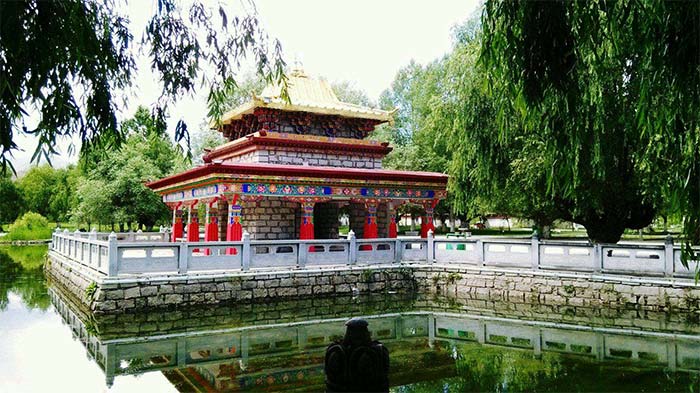 This street is a famous food street in Lhasa, almost every restaurant has its own specialty. It’s a place where is illuminated at all night. People say, the beauty of Lhasa is also steaming hot, people from other places should spare some time in search of delicious food.

Dining and Accommodation around Potala Palace

Where to Eat around Potala Palace

The Yak Yogurt Station is a “must visit” store, located in front of the west gate of Potala Palace, but the flavor is a little bit sour, and the most popular ones are original yogurt, yogurt rice and ginseng fruit yogurt.

The Xuesheng Palace Restaurant is on the Potala Palace Square, be called as the most authentic and fancy Tibetan restaurant, ‘braised pork”“ Steam Beef and potato” are recommended.

However, look for the most famous and delicious stores and restaurants? Just go for the the business circle of Barkhor Street. Here are some of the restaurants worthy of a try.

“Gang Ki” restaurant is a very popular one, offering authentic Tibetan meals, although the facade of the shop is very small, but the terrace on the second floor is a great place to see the incredible sunset scenery.

The Aa Marthe de Restaurant is on the R.Yutuo, offering Tibetan and Nepali dishes with reasonable price, good flavour and staffs are very nice. The recommend speciality is the Marthe chicken with ‘nang’(a special local pancake) .

The Guangminggangqiong Sweet Tea House is the largest and oldest sweet tea house in Lhasa. It is located in Barkhor Street. After entering, take a small cup, sit down and put the money on the table, waiters will bring a big aluminum pot to pour the tea and get changes for you. 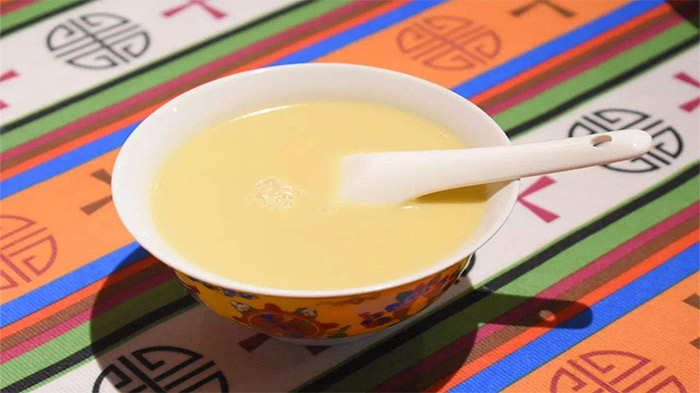 The Makye Ame is next to the Jokhang Temple, it’s said that it is the place where Tsangyang Gyatso (Dalai Lama VI) met his lover, now this place has become one of the restaurants that visitors must go. The restaurant is a typical Tibetan style, there are many message books on the window sill, which are filled with the feelings of tourists from all over the world

The Tibetan Kitchen has a good reputation among foreigner, the waiters speak English better than Mandarin, the dishes are mainly Nepali and western foods, recommend ‘beef bread’ and the yogurt.

Besides, there are other two places are high praised by local people.

The Donkey’s Nest Restaurant mainly sell cantonese cuisine(from Guangzhou province), tasty is light and not greasy, near the DongCuo Hostel and on the second floor.

The Cuomu Bean Jelly, next to the DeKang Hotel, a small store many local people would recommend, the bean jelly and cold noodle are in high demand.

The first recommended hotel is the Shangri-La Hotel, located on the R.Norbulingka, 20 minutes walk to the Potala Palace and a few minutes to Norbulingka. Most of the rooms are traditional Tibetan styles, cost average 1300~2600 yuan per night.

DeKang Hotel is on R.Shengtai, next to R. Jiangsu, and 2 km from the Potala, the door number is No.2, it’s a total Tibetan style hotel, prices are from 600 to 1400, with cozy rooms and wonderful services, must worth the price.

Hanting Seasons Hotel is the high-end brand of “Hanting” chain hotel, located on the R.Jiangsu, 15 minutes walk to Jokhang Temple, price is around 400 yuan/night, is a modern style with cost-effective hotel.

If you prefer some Hostels, the PingCuoKang Hostel which is located on the R.Duosenge North,No.48 and Dong Cuo International Youth Hotel is on the R. Beijing East,No.10 are most famous and oldest. The PingCuoKang has many graffiti on the wall, and it has two more new branch hostels on the same road, all are in the north of Potala Palace and 15 minutes walk to the East Gate. The DongCuo Hostel is closer to the Palace, equipped with simple things but very clean,located in the city center, so it’s easy to go anywhere.

While the SuoNaMu Hostel is one of the most expensive but has the best environment, at No.11, R.Deji South,one kilometer from the Potala’s West Gate, a little bit far from other main attractions, but the transport is very convenient.

Pharmacies and Hospitals around Potala Palace

For the newcomers in Lhasa, it’s often the case you might buy some medicines or stock up other stuff for the rest of the journey. Here we will provide useful information about hospital and some pharmacies addresses around Potala Palace.

Kangzhu Tibetan Medicine is located at No.19 on Niangre Road, where next to Zong Lu Kang Park.

Fukang Hospytal is located at the corner of R.Niangre and R.Linkuo North, the nearest hospital to Potala Palace.

People's Hospital of Tibet Autonomous Region is on Lingkuo North Road, No.18, if you are at the East Gate of Zong Lu Kang Park, please head to the north, at the crossroad of R.Niangre and R. Lingkuo North, turn right and keep walking about 300 meters, the big hospital will be seen.

Lhasa St. Kang Ji Medical Supermarket is located on the Xuexincun Road, where is near to the North Gate of Zong Lu Kang Park. Out of North Gate, head to the east and turn right at the first crossroad, 100 meters you won’t miss it.

Linxin bio Medicine Store is situated on Yutuo Road, No.6, where is in the middle of Jokhang Temple and Potala Palace.

Lhasa People’s Hospital is a class-A hospital where is 2 kilometers from the Potala Palace, No.1 on Beijing East Road, if your hotels are in the east area, this is the nearest one to go.