Potala Palace, towering on the Red Hill, is the cardinal landmark of Lhasa. It has been listed as world cultural heritage by UNESCO for its beauty and magnificence of architectural structure and large collections of precious artworks. For many tourists, chapels, Buddhas and gorgeous murals inside Potala Palace may be the highlights of their tour. While the true beauty of the palace lies in its unique architectural structure.

As one of the most brilliant architectural buildings in the world, the whole palace houses nearly 10,000 houses, all of which are made of wood and stone, with a construction area of about 130,000 square meters. As a building that integrates Tibetan monastery and palace, Potala Palace is renowned as one of the world’s three most famous castles. If you are an architectural, religious or photographic lover, come for a visit of Potala Polace, you will enjoy a feast for your eyes.

White Palace, Red Palace, Shol Town at the base of the palace as well as Zongjiao Lukang Park at the back constitute the complete layout of Potala Palace.

The Red Palace, which is the central member of Potala, contains the principal halls and chapels and shrines of past Dalai Lamas. There is in these rich decorative paintings, with jewelled works, carving and other ornamentation that you will marvel at. As for the White Palace, it is the place with seven floors where Dalai Lama lives. Also located there are the offices of the Tibetan government, governmental assembly halls, and other official offices. 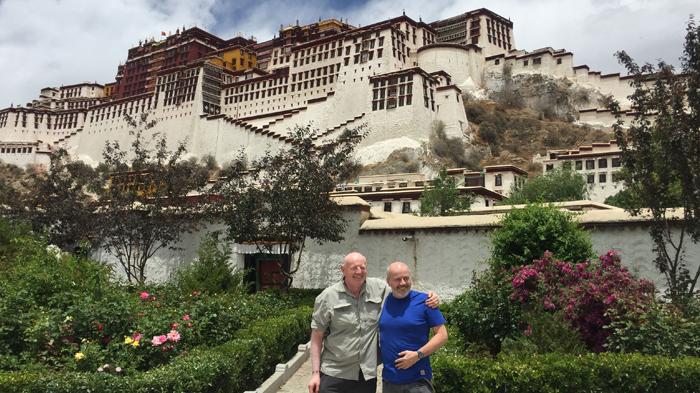 Shol Town, also called as Shol Garden or Shol Village, was a small village at the foot of the Potala Palace which has witnessed the past of Tibet. In the ancient time, it mainly worked as Tibetan government department. Nowadays, it has been transformed into a museum recording the history and development of Tibet.

Zongjiao Lukang Park is located adjacent to Potala Palace. Local people regard it as the best resort in that there are bridges, lakes, birds, fishes as well as green trees and various flowers. Here you can take the best picture of the inverted reflection of Potala Palace from the lake.

White Palace, also the winter palace of Dalai Lama, was built earlier than Red Palace and functioned as offices of the Tibetan government and assembly halls. It is endowed with this name since color of the wall is white.

The oldest building in Potala Palace is the Fawang Cave in which the statue of Srongtsen Gampo and Princess Wencheng are placed. It’s said that the sculpture was finished in Tubo Period (618-842 AD).

When you climb to the fourth floor, you will arrive at the main palace of the White Palace, which is also the biggest one of it. With an area of 717 square meters, it is one of the main courts for the Dalai Lama to preside political activities. From fifth to seventh floor, patios are built along which the surrounding rooms are used as office, living room, kitchen, warehouse, etc. 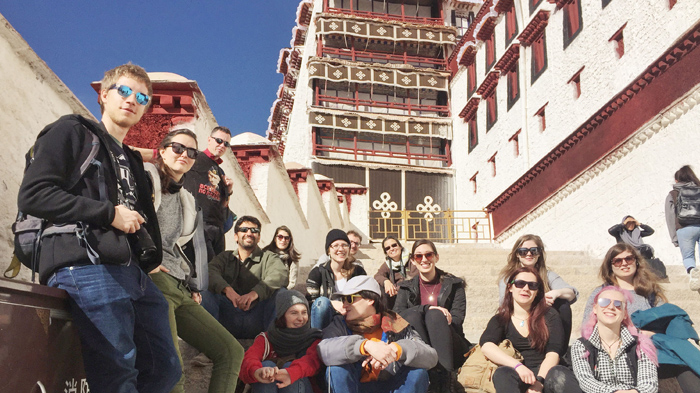 Launch your exploration of Potala Palace from White Palace

On the top floor, there is a palace called "Sunlight Palace", in which part of the roof in the hall is open, allowing the bright sunshine to inject, thus endowing it with this name. It’s the place for Dalai Lamas to reside in and deal with governmental affairs, and only senior officers and Lamas are allowed to enter. You will amaze at the luxurious decorations of the room.

Additionally, there is something you may find interesting - the palace's wall is painted with milk! Every year, just before the 22nd day of the 9th month of the Tibetan calendar, people will paint the palace's walls. Since the white color of White Palace represents mercy, the “paint” for the walls is made of milk, sugar, honey, and some herbs, mixed with white lime.

Visitors are usually required to line up on the eastern Potala platform to enter the White Palace. During your waiting, just take time to have a picture with your friends and lamas. It will be interesting! Here is a little tip for you:

The Potala toilet at the right side of the White Palace Square is the only rest room during the route of the rest tour time. The bathroom at the West Gate of the Potala Palace is said to be distinctive and worth a try. Here you can also buy some mineral water since it’s allowed for tourists to bring water into the palace.

Red Palace, built at the beginning of 19th century, is the higher of the two palaces, and is made up of tomb stupas, chapels of Buddhas and scripture hall. Used as a house of prayer by the Dalai Lama, this part of the Potala Palace was dedicated to the study of Buddhism and advancement of the religion.

As the main building of Potala Palace, Red Palace has totally 13 storeys with 117 meters and covers an area of over 16,000 square meters. Space from the ground to the fourth floor is employed as warehouse. When ascending from seventh to ninth floor, you will see various chapels of Buddhas and scripture halls in which many status of buddhas are placed. From tenth to thirteenth floor, golden tomb stupas of successive Dalai Lamas, especially that from the 5th to 13th, are located. To appreciate them along the way, the stunning luxury of these golden stupas and status decorated full of jewels, rich decorative paintings and other ornamentations will deeply impress you.

Among these invaluable cultural relics, the stupa of fifth Dalai Lama is most awe-inspiring. The stupa is 14.85 meters high and overlaid with 3,721 kg of gold. There are more than 18,000 jewels decorating the stupa, including pearls, coral, amber, and agate. Flanking it are two smaller stupas containing the 10th and 12th Dalai Lamas. Richly embossed, the stupas represent the concentrated wealth of an entire nation. In the west of the Red Palace lies the tomb stupa of thirteenth Dalai Lama. Built in 1936, it’s the latest building of the Potala Palace while in the similar size with that of fifth Dalai Lama. The two are major shrines of Potala Palace. 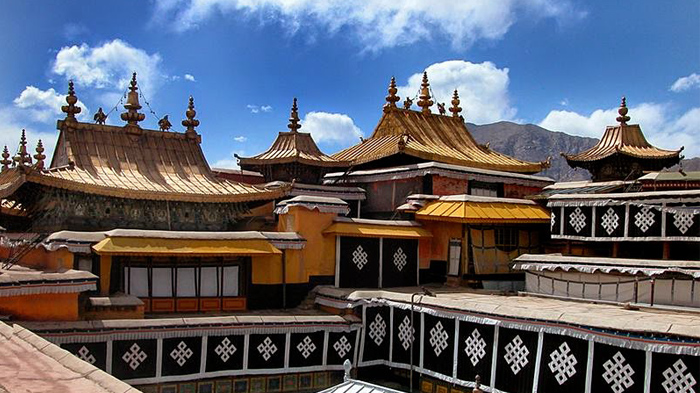 The roof of the Red Palace is covered with golden domes of the shrines and chapels. You can enjoy a great view on it. At the top stand three small pagodas. In the sunny day, the golden roof will glitter dazzlingly under the sunshine, manifesting the beauty and majesty of the holy building.

The red color of Red Palace is the embodiment of wisdom and authority whereas the golden color of the Golden Roof represents the supreme power. They are both demonstrating the stateliness of this architectural wonder.

Since steps of Red Palace are steep, you are not suggested to visit Potala Palace on your first day of arrival in Lhasa. Have a good rest on the previous day, you will find it easier to cope with the long steps and better enjoy the extraordinary view of Potala Palace. When climbing the steps, please make sure to stop and rest for a while.

Right before you climb the stairs to reach Red Palace, you are expected to the Shol Town, located in the base of the Red Hill. Many cultural relics are collected in this museum, recording the evolutions of Tibet in the past decades.

Shol Town was built nearly at the same period with Potala Palace. It’s a square old city with walls circling on the outside. Architectures in this village can be generally divided into three categories according to their different functions. First is the workplace in which there are coin casting institutions, jails, as well as administrative, judicial and tax authorities. The second is the institutions providing services for the daily life of officers such as winemaking workshop and sweet tea workshop. And the last is the mansions and residences of Lamas and officers.

When visiting in the Shol Village, you are just like strolling through the long river of Tibetan history. Here the village has witnessed the great changes of Tibet from the rule of feudal serfdom to a fresh-new independent autonomous region. Strolling in the village, you will gain more knowledge about this holy land on the Tibet Plateau.

Zongjiao Lukang Park at the back of Potala Palace is like the backyard garden of it. In the ancient time, it was the resort of Tibetan government officials, nobilities and Lamas for entertainment. Nowadays, it has become a perfect site for tourists shooting pictures of the inverted reflection of Potala Palace from the lake. - Check the Best Places to Shoot Potala Palace in Lhasa 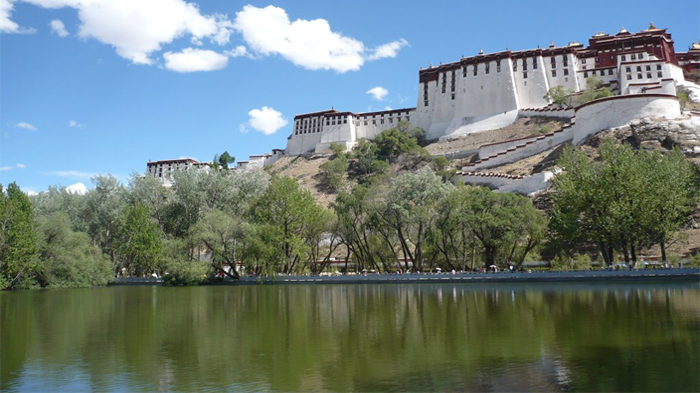 Besides, with the broad lawn and evergreen vegetation planted in the park, it’s also a good place for local people to enjoy leisure time. If you have finished your visit in Potala Palace, hanging out in the park to enjoy the beautiful lake, birds and colorful flowers can also be a good choice.