Located in Gyantse Town of Shigatse Prefecture in western Tibet, Pelkor Chode Monastery, also known as the Palcho Monastery or the Shekar Gyantse, is the main monastery in the valley of the Nyangchu River in Gyantse County. A large complex of monastic structures, the monastery is most famous for its Kumbum Stupa, the only one of its kind in Tibet.

However, the monastery is also unique in Tibet in that it houses three separate schools of Tibetan Buddhism under its roofs - Sakya, Gelug, and Kadam. Lying around 100 kilometers to the southeast of Shigatse city, the monastery has aspects of Chinese Han, Tibetan, and Nepali architecture, and is one of the highest status monasteries in Tibet.

While the monastery was not built until the 14th and 15th centuries, the site is referenced in the 9th-century history of Pelkhor-Tsen, the son of the last Tibetan king, Langdharma, and the monastery is named after him. It was here that Pelkhor-Tsen first attempted to rebuild the Yarlung dynasty of his father, before the move of majority of the devout Buddhist members of the former royal family to Guge.

The town at Gyantse was established as a feudal town run under the Sakya Sect in the 14th and 15th centuries. Throughout the two centuries, the monastery, its halls and Lhakhangs, the Dzong, and the Kumbum were all built, including the famous Tsulaklakang Monastery in 1425. However, the importance of Pelkor Chode declined by the end of the 15th century. 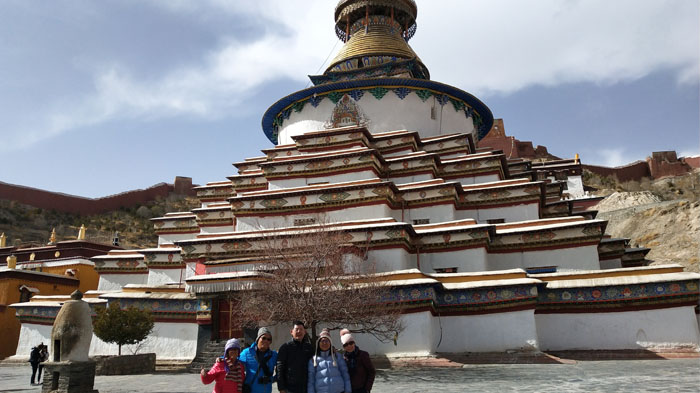 Kumbum Stupa, the only one of its kind in Tibet.

The first school of Buddhism in the monastery were the Sakya School, and it was the second Prince of Gyantse, a devotee of the first Panchen Lama, who built the Tsulaklakang Monastery, as well as the famous Kumbum Stupa. Many other buildings followed, with Gelug and Kadam building their own religious colleges and hermitages on the site later. By the end of the 17th century, there were 16 colleges at Pelkor Chode, with another being added by the end of the 19th century.

The monastery has suffered some heavy damage over the year as well. In 1904, the monastery was attacked by British forces, and while the damage was mostly restored, some bullet holes remain in a few of the walls. From the original 1,520 monks that once resided at Pelkor Chode, now there are now fewer than 80 monks in permanent residence.

Standing 32 meters from the ground, the Gyantse Kumbum is the tallest stupas in Tibet, and the only stupa of its kind in the Tibetan areas. With nine tiers, each of which has its own unique chapels, the stupa represents the “progressive hierarchy of a three-dimensional Mandala”, according to the Sakya compilation of the Drubtob Gyatsa. It is believed that the stupa captures within it the complete path of spiritual enlightenment and the gradation of the tantras. 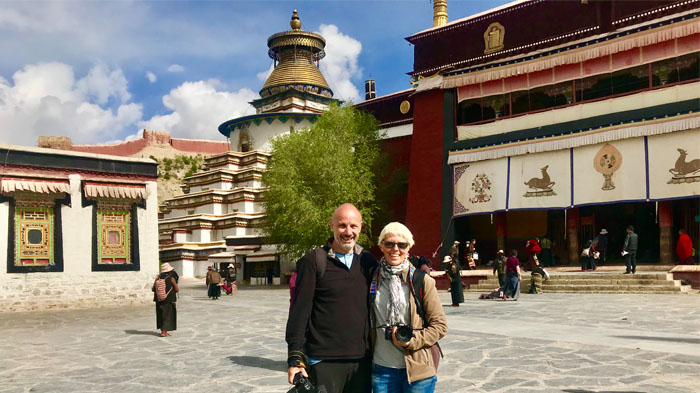 The main entrance is on the second tier, and is reached by staircases at the cardinal points of the first tier. The entrance is located on the southern side of the stupa, and stairs lead from each tier to the next on the inside. Each tier has its own chapels, reducing in number with each level as you go up, with a single chapel on the last (10th) tier.

The main temple of the monastery, the Tsulaklakang is built over three floors and contains some of the best and most well-preserved murals and images from the 15th century. On the ground floor are four images of the Four Guardian Kings, which lead on to the entrance to the Assembly Hall, known in Tibetan as the “Tshomchen”, which is an impressive hall containing 48 pillars, dozens of silk thangkas, images of the Sakya protective deities, and frescoes depicting grotesque scenes of charnel burial grounds. 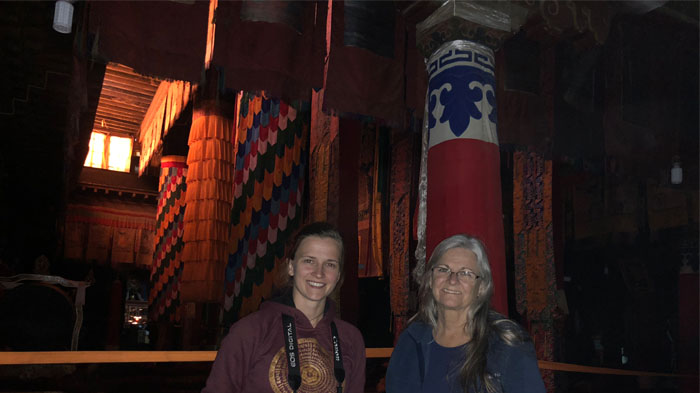 The inner sanctum of this main building is located in the Main Chapel, and contains a huge bronze statue of Sakyamuni Buddha, surrounded by idols representing the different Buddhas of the Three Times. The Royal Chapel of the hall, known as the “Chogyel Lhakhang”, has clay images of the former ancient kings of Tibet, as well as images of Atisha, Padmasambhava (Guru Rinpoche), Kamalashila, Shantarakshita, Manjushri, Vajrapani, Shakyashri, and Avalokiteshwara. 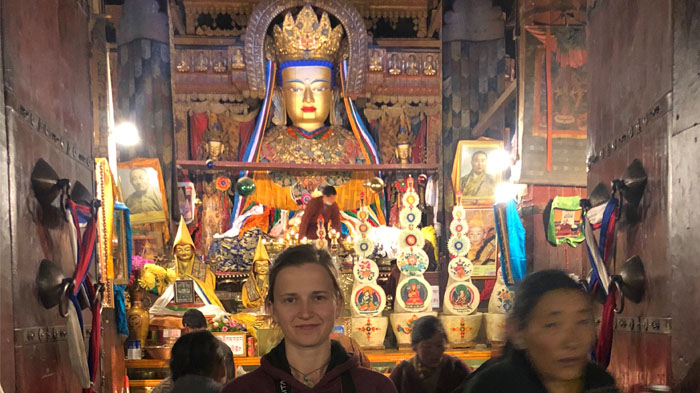 The upper floor of the temple has five separate chapels, and houses the clay images of the various incarnations of the Sakyapa lineage. The same floor has a chapel dedicated to Je Tsongkhapa, with images of the Gelug Founder, the 12th Dalai Lama, Sakyamuni Buddha, the Sakya Master Buton Rinchen Drup, Sakya Pandita, Padmasambhava, and the Five Aspects of Manjushri.

The top floor of the temple is solely dedicated to the Zhalyekhang chapel, which contains painted Mandalas eight meters high on the walls. Images inside the chapel include the Jowo Sakyamuni, the Maitreya Buddha, Manjushri, Tsongkhapa, and Padmasambhava.

Zhacangs, 16 residential quarters for the monks of Sakyapa, Kadampa and Gelugpa Sects

The Zhacangs, residential quarters for the monks and lamas of the monastery’s separate sects, were built over the centuries as the different colleges of the various sects were added. The Gelug Sect was the dominant sect in the monastery after the Sakya sect became less influential, and originally, seven of the Zhacangs in the monastery were Gelugpa. However, there are only three of these residential halls remaining in the monastery, one for each of the three sects in residence there. 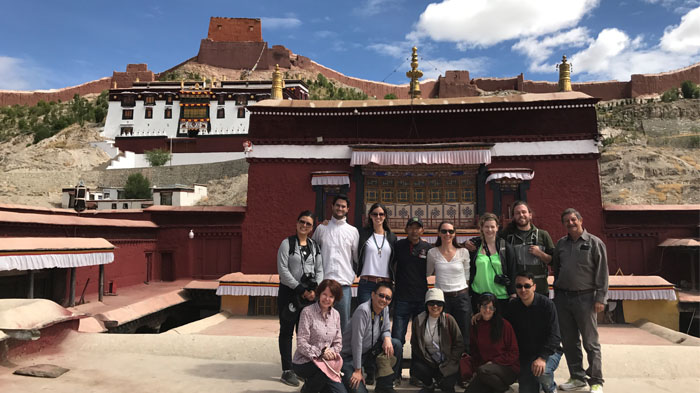 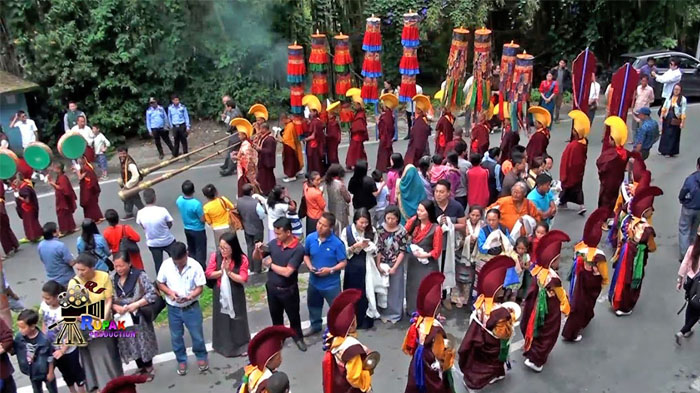 Places to Visit around Pelkor Monastery

Gyantse Dzong, built on the rugged hillsides that lie around the town, is an arresting and impressive sight on the hills behind what was once the largest town in Tibet. The fortress was constructed in around 1268, by the local prince, Phakpa Pelzangpo, an influential nobleman with the Sakya overlords of the region at the time. In the early 14th century, a castle was built alongside the fort, which later became the seat of the Buddhist guru, Butan Rinchen Drub of Zhalu. The palace was later moved to the town, and the temple now known as the Sampel Rinchenling was built nearby on the hilltop. Now, this is merely a ruin, with few buildings left above the ground floor. 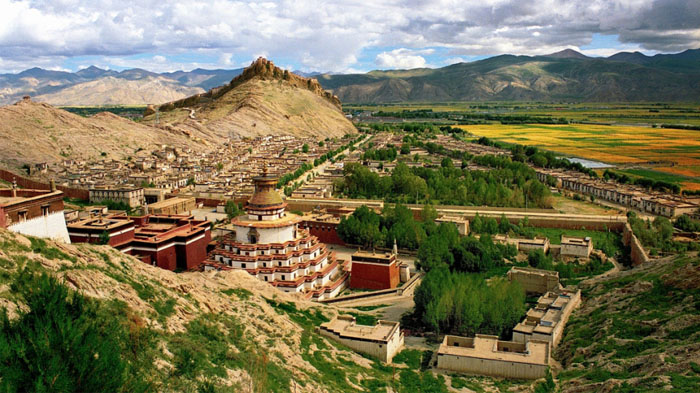 Capturing a bird view of the ancient Gyantse Fort

A well-preserved serf manor that dates back over 400 years, Pala Manor was the home of the Pala Family, one of the four noble families in the Tibetan feudal serf society in Shigatse. Located in Banjorlhanbo village in Gyantse County, the manor was the major manor in the area of Gyantse, with 37 affiliated minor manors and over 100 serfs of their own. While the beautifully decorated manor contains exorbitantly expensive furniture, and was filled with the luxurious extravagances of the period, the lives of the serfs belonging to the manor wasextremely unjust and impoverished. Little more than slaves, albeit poorly paid, the serfs had no rights and were treated like beasts. The manor is a testament to the former Tibetan society of privilege and serfdom, and reflects the rich life of the nobles in the old Tibetan system.

Roam over the old street of Gyantse

Once a major town on the historic trade route that ran from Tibet to India, Gyantse was once the largest town in Tibet, and this is evident by the 3km-long wall that surrounds the entire old town of Gyantse. The streets of the old town are narrow and winding, snaking in between the whitewashed walls of the houses. Even today, the people in the old part of the city live in much the same way as before, and it is common to see horses, yaks, and dogs in front of the small Tibetan houses. A few local markets can be found in the small side-streets, mostly run by the Muslim traders that live in the town, and you can find some great bargains as souvenirs. For the most part, the small streets of the old town are residential, and are a great way to discover a little more about the customs and traditions of the people of this ancient trade town.

How to Plan a Visit to Pelkor Chode Monastery

If you are planning a trip to Tibet that includes the Pelkor Chode Monastery, then you are fortunate to be able to book on one of our amazing 8-day Lhasa Gyantse EBC tour of the plateau, which includes a stop in Gyantse to visit the monastery and the Kumbum Stupa. Some tours in the region do not stop for more than a few hours at the town, however, this tour allows you to spend almost half of the day on the route to Shigatse from Lhasa at the town, visiting the Pelkor Chode Monastery, the Gyantse Kumbum Stupa, and the Gyantse Dzong. 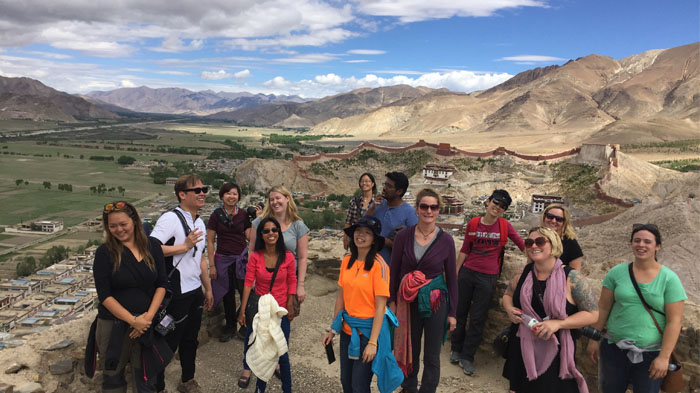 Lying just 100km east of Shigatse, and just 171km to the southwest of Lhasa, Gyantse is an easy place to get to, and is one of the places in Tibet that can be visited at any time of the year. Gyantse has a very clear separation between wet and dry seasons, and while it can get pretty cold in the winter, the city is normally snow-free for almost the entire winter. 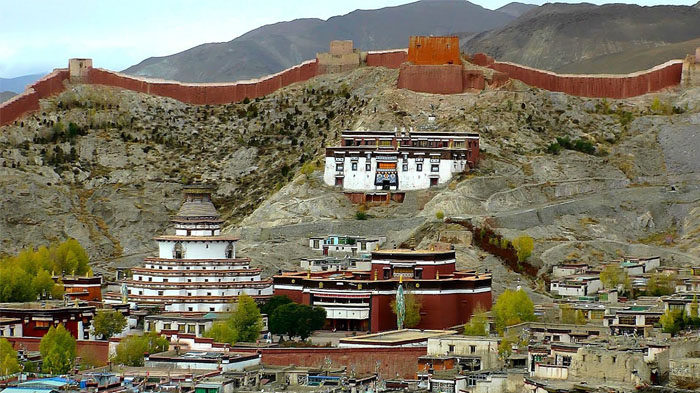 At an altitude of 4,000 meters above sea level, the climate is a little harsher than that of Lhasa, with maximum summer temperatures that can reach to only around 20 degrees, and lows of around 7 degrees at night. In the winter months, daytime temperatures can get down to around 6-7 degrees, with nights in January dropping as low as -14 in the worst years.

Rainfall comes mostly between June and August, with July being the highest month, averaging around 161mm for the whole month. From the end of September to the middle of February, however, there is almost no rain at all in the area, with the early pre-monsoon rains coming in around March. Humidity, however, is high all year round, ranging from 28% in the coldest month of January to as high as 53 percent in June.

Accommodation and Hotels around Pelkor Monastery

Mostly, travelers in Tibet only make a short stop at Gyantse to visit the monastery and Kumbum, and then move on to stay overnight in Shigatse, however, if you are traveling on one of our family tours, or are cycling across the plateau from the capital to the world’s highest peak, then a stop in Gyantse is a welcome change. With the family tours, we find that a stop in Gyantse helps to break up the long travel times between cities, as well as being a little less rushed for families with small children. For cyclists, the stops at the end of each day are closer together, and the stop at Gyantse breaks up the long ride from the Karola Pass to Shigatse.

Gyantse has a surprisingly wide range of hotels and guesthouses to stay in, though they are obviously not luxurious places to stay. Outside Lhasa, luxury hotels are a luxury that you will rarely find. The best option for most is the Gyantse Hotel, a 3-star hotel that offers single, double, and family rooms, all with attached bathrooms, as well as a few deluxe suites. Alternatively, the Gyantse Jian Zang Hotel is a good budget option for somewhere to stay in Gyantse, and carries two stars, making it an affordable and good value in comparison to the cheaper guesthouses and hostels.

Pelkor Chode Monastery is undoubtedly one of the best and most striking monasteries in Tibet, with its many Zhacangs and the three sects of Tibetan Buddhism that reside there. Definitely the most unique monastery in Tibet, not least for the amazing and unique stupa that is located there, Pelkor Chode Monastery is well worth taking more than a few hours to explore, and is a good choice for an additional stop along the route to EBC or Kathmandu for those with some time to spare on this stunning piece of Tibetan history.

0 Comment ON "Pelkor Chode Monastery, the Complex of Tibetan Buddhism, Architecture, and Art"