Namtso Lake, widely accepted as the largest lake in Tibet and the second-largest saline lake in China, is located at 4718m above the sea-level on the snowcapped Nyainqentanglha Range. Namtso Lake, with an area of 1920 square meters, is worshiped by Tibetans as one of the most sacred lakes (another two are Yamdrok Lake and Lake Manasarovar respectively) in Tibet for its high altitude as well as being next to heaven.

With 5 big uninhabited islands in its center and approximately 1500 lakes scattering around, Namtso is taken as the meditation and spiritual retreating place for pilgrims all over the world, making it the holy and the most mysterious lake to visit. Seeking the mysterious past of the Namtso Lake requires us to go back to the ancient times and began from where its tectonic formation started.

a. The joint influence of Himalayan tectonic plate movements and glacier erosion

The Qinghai-Tibet Plateau where Namtso Lake lies now originated 70 million years ago. As the product of the extrusion between Eurasian Plate and Indian Plate, Qinghai-Tibet Plateau was finally formed with its continental crust set on the basement which was shaped about 1 billion years ago. During the Tertiary and Quaternary Period, a gigantic orogenic movement took place in Himalayan Mountains which lied at the edge of south Qinghai-Tibet Plate. With the unstable rising and sinking of the tectonic movements in Himalayan regions, Namtso Lake was originally formed at the bowl-shaped sunken area, accompanied by some of the glacial actions. 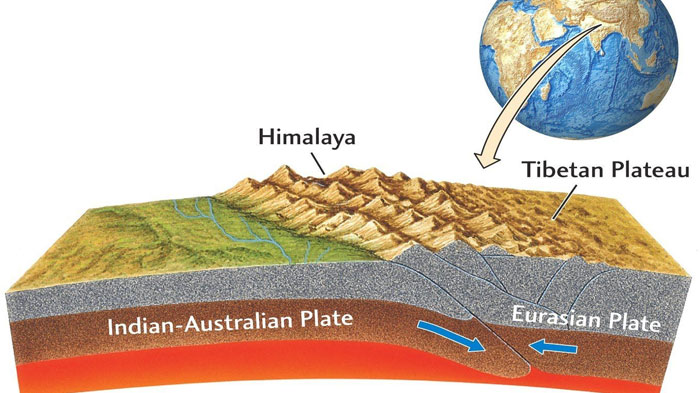 b. Evolution of Namtso Lake

The slow rising of the tectonic plate and drought weather makes the Lake become smaller and smaller the size it originally formed.Namtso Lake where we set feet on nowadays differs from what it was originally to be millions of years ago, and also, it has been still changing. The newly-built Namtso Lake, easy to imagine, was much more stunning and amazing than any other fresh lakes in Tibet. With the increasingly deteriorated plateau climates, though slowly but inevitably and deadly, the entire area of Namtso Lake is shrinking every year.

c. It is such formation that creates the basic foundation for Namtso Lake’s stunning beauty in the following years.

Namtso Lake, China’s second largest saline lake, deserves its reputation by the scientific proves given by experts. Due to the tectonic movements during the long period of time, Namtso Lake has risen up to a higher position on the edge of mountains.

As a result, the sources of the Lake water are mainly from the natural precipitation, the melted ice and snow of Nyainqentanglha Range as well as the run-off formed by the land rain. Furthermore, Namtso Lake is an enclosed lake with strong sunlight and merely rainfalls, then the mineralization degree tends to be extremely higher than other lakes in China, ranking the second place of the saline lake nationwide. The uncontaminated pure water renders the Lake surface with turquoise and deep blue colors, which makes Namtso more mysterious and attempting.

Influenced by the massive formation process, Namtso is situated at the Semi-humid and semi-arid transition zone, featuring with abundant sunlight, heat and waters. The annual sunshine duration reaches about 3000 hours which makes the rainy season (from June to October) and dry season (from November to the next May) distinct from each other. Besides, the howling gale at Namtso has become another specialty of it. The strong wind which roars directly from the lake to the shore ripples out the lake surface, making the holy lake much more grand and magnificent. 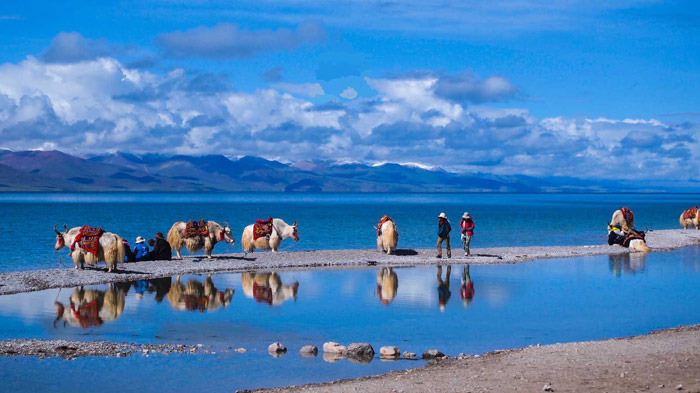 The ancient natural power formed during the long period of shaping process has endowed Namtso Lake with mighty strength and mysterious powers. In winter, its solemnness and strength are totally and unreservedly unveiled.

Thick ice frozen on Namtso Lake surface at the end of Tibetan lunar year in December makes it usher into the winter (5 months from December to next April), leaving its solemnness and deadly stillness for pilgrims to awe. Most of the animals will not come out hunting for food until next April when the ice of the Lake starts to melt. If you are lucky enough, you may probably hear the cracking sound of the melting ice on the Lake surface miles away.

The Altitude Change from Lhasa to Namtso Lake

Exploring the sacred Namtso Lake needs more preparations since the altitude ascends about 1,000m as the tourist bus running from Lhasa (3650m) to the Lake Namtso (4718m). After 88km’s drive, the bus will first arrive at Yangbajing Town (4300m) which is a renowned place for hot springs as well as pastoral sceneries and a popular spot for photo-shooting. Departing from Yangbajing, tourist bus continues to travel on the asphalt road with a limited speed and begins to approach the Nyenchen Tonglha Mountains with the altitude arising from 4300m to 4500m. During this lap, you have the chance to enjoy the distant view of Nyainqentanglha Range or choose to stop at the observation deck to shoot these solemn and undulating mountains. 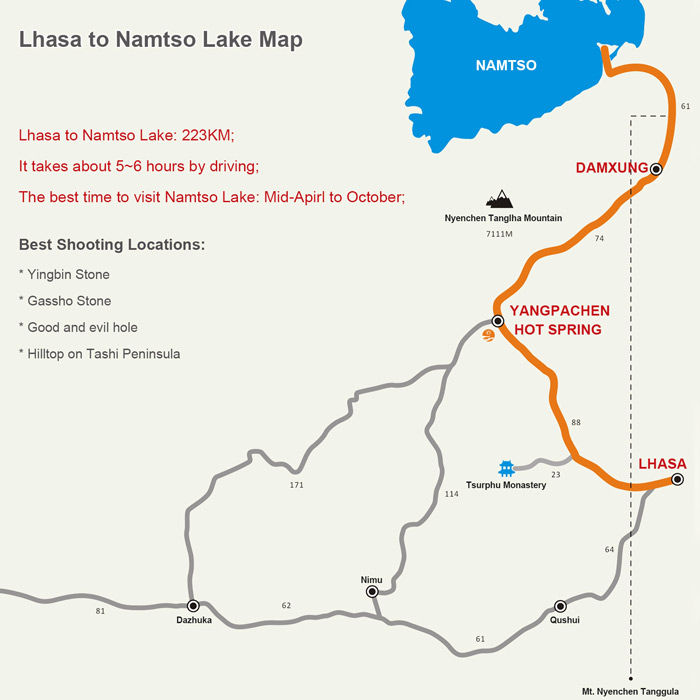 The bus, after 74km’s drive, reaches Damxung County (4200m) and then continues to climb up until it reaches Nagena Pass (5190) for a temporary stop. Nagenla Pass, which is considered as the only route leading to Namtso Lake, now serves as a depot for travelers to do the photo shooting. The distant view of Namtso Lake can be enjoyed from here, making this place the most popular spot to appreciate the magnificence and solemnness of this holy lake as well as the Nyenchen Tanglha Mountains lurking behind. Leaving Nagenla Pass, the bus goes downward and eventually arrives at the destination, the Namtso Lake (4718).

Insider Tips:
Nagenla Pass, on the only road to Namtso Lake, has the highest altitude along the whole journey. Tourist buses will make a short-time stop here for travelers to take photos. Due to the rapid rise of height and the lack of oxygen content, altitude sickness can be easily caused. Travelers are recommended to follow the instructions below.

1) Do not exert yourself like chasing around or jumping when arriving at Nagenla Pass.
2) Do not make grand or exaggerated gestures when doing the photo-shooting.
3) Relax the body and breathe smoothly
4) Nagenla Pass is quite a distance from Lhasa, and more than 1,000 meters higher, so take some altitude medicine and oxygen with you in case of an emergency.

When to Visit Namtso Lake

It is generally accepted that the most appropriate time to visit Namtso Lake is from mid-April to Oct. The road to Namtso is typically sealed from December to next March during which the weather turns to be extremely cold and the Lake surface begins to freeze.

In early April, the melted water in Namtso carries off the heat and the temperature remains to be low while in November, the chilly air from snow mountains creeps out and pervades the Namtso areas, making it hard to approach by travelers. Whirling snowstorms sometimes occur in October, as a result, the treacherous road condition, cold weather and lower oxygen content usually jeopardize most of the traveler’s exploration. - Know more about Namtso Lake Weather and Climate 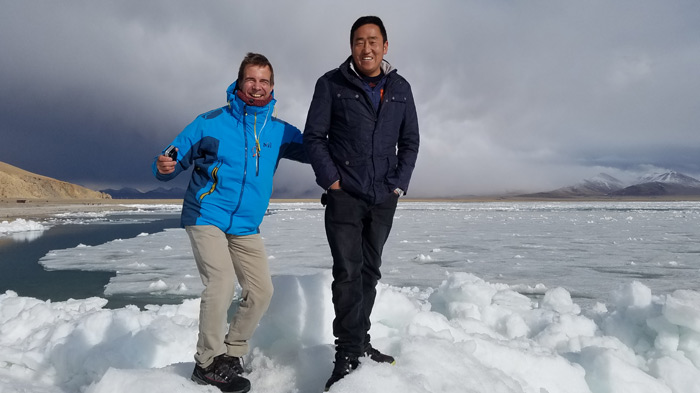 1) Due to the high altitude of Namtso and the long drive, choosing to arrive at Lhasa two days before the visiting and having one night stay at Namtso have always been a wise decision worth recommending. Staying in Lhasa city the first two days can effectively help travelers adapt the plateau climate and do some preparations for the short-term Namtso visit.

Depart from Lhasa city on the third day morning and take a temporary stop at Nagenla Pass; arrive at Namtso Lake and appreciate the breathtaking Sceneries; enjoy the magnificent views nearby Nyainqentanglha Range and pastoral wide open space with tents and local nomads; visit the scarcely disturbed Tashi Peninsula in the center of the lake; enjoy the sunset by the Namtso Lake.

2) No hotel accommodation at Namtso is available, but a campsite with limited living resources on Tashi peninsula. - Check the info on Namtso Tent Guesthouse If you insist on a better hotel accommodation, Damxung Town which is 2 hours away on the Lhasa road is a perfect choice. The weather at night can be harsh with chilly winds. It is cold even during summertime, so a thick coat is a must when you decide to make a stay on the Peninsula.

On the fourth day morning, you can appreciate the rise; walk alongside the lake to pray the good health, safety and other virtues; explore the nearby hills and then go back to Lhasa city.

According to Tibet travel policy, independent tourism is not allowed. All foreign travelers are required to have a guide, a tour company itinerary, and a Tibet Travel Permit, all of which we can arrange for you.

0 Comment ON "Namtso Lake Altitude: the Formation of the World's Highest Saline Lake"