Lying on the vast high-altitude Qinghai-Tibetan Plateau, Tibet is a huge land, filled with mountains, rivers, lakes, and valleys that are some of the most spectacular in the world. Traveling around the plateau can be done in many ways, including by car, by train, and by bicycle, to name a few. Two of the most popular places to visit in Tibet are the Tibetan capital of Lhasa and the second city, Shigatse.

Lying in the south of central Tibet, Lhasa has been the capital of the region since the 7th century, when it was moved from Yumbulakang Palace in Shannan Prefecture by the 33rd King of Tibet, Songtsen Gampo. The city lies in the valley of the Kyichu River, more popularly known as the Lhasa River, a northern tributary of the great Yarlung Zangbo River. Located on the southern side of the river, the city lies in the area of what was once a small lake, which was drained, according to Tibetan legend, by the Tibetan king in order that he could build the Jokhang Temple.

Shigatse, Tibet’s second city, lies to the west of Lhasa, around 268 kilometers from the capital. A Prefecture-Level city, it lies in what was the ancient historical province of Tsang, in western Tibet. Shigatse City lies on the border with Nepal, in the southwest of modern Tibet, and includes such awesome attractions as Mount Everest and Rongbuk Monastery.

Lhasa to Shigatse by Train Distance: 248km and How to Travel

Traveling to Shigatse from Lhasa by train is now possible, thanks to the extension to the Qinghai-Tibet Railway, which has had a spur line added from the capital to the region’s second city. This new line, which opened for use in August 2014, runs for a total distance of 248 kilometers. Trains to Shigatse from Lhasa takes less than 3 hours, which cuts down the travel time to around half of the time it takes to make the journey by road.

The railway line starts in Lhasa, at the Lhasa Railway Station, and runs south along the river as far as Sherong, and then on to the town of Chushul. From there, it follows the Brahmaputra River, also known in Tibet as the Yarlung Zangbo River, passing through the Yarlung Zangbo Grand Canyon to reach the town of Nyemo. Heading west, the first major stop in Shigatse is at Rinbung, before finally reaching the city of Shigatse, the seat of the prefecture and home to the famous Tashilhunpo Monastery. 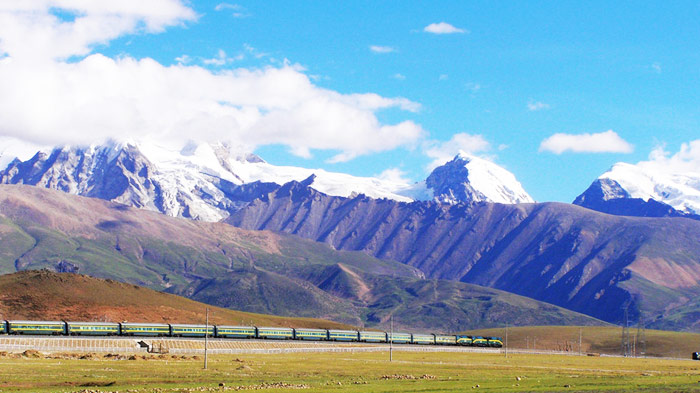 The train from Lhasa to Shigatse will bring you across many beautiful Lakes and mountains.

There are fourteen stations along the line from Lhasa to Shigatse, although the train does not stop at all of them on every trip. The route includes the stations at Lhasa South, Baide, Sherong, Chushul, Chabala, Nyemo, Karu, Rinbung, Dazhuka, Denggu, Jiqiong, and Kadui, and only stops at most of these if there are passengers waiting. The stations it stops at regularly are at Chushul, Nyemo, and Rinbung.

With three pairs of trains per day running the route between Shigatse and Lhasa, there are more than enough seats to cater for everyone, though it can get busy in the peak season. As with all trains that run on the plateau, the Lhasa to Shigatse train has oxygen for international and domestic tourists from lower altitudes, in case of altitude sickness.

Lhasa to Shigatse by Road Distance: 271km and How to Travel

The road from Lhasa to Shigatse forms part of one of China’s most famous roads, the G318 National Highway, which runs from Shanghai in the east to Zhangmu in the west of Tibet, the former border crossing point into Nepal, more than 5,400 kilometers long. Known as the Friendship Highway, this stretch of road is one of the most traveled roads on the plateau, and has some of the most amazing scenery of any road in the world. 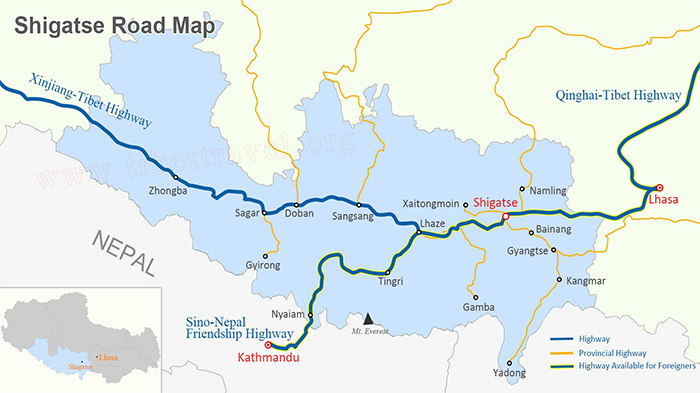 The Friendship Highway runs for more than 800 kilometers from Lhasa to the Nepal border, and the section between Lhasa and Shigatse is one of the most well-driven roads in the region. Originally, much of the Friendship Highway remained as stretches of gravel roads until recently, when the entire length of the highway was covered with asphalt, to make it a better road for the increased number of vehicles using it daily. Now, the entire road from Lhasa to Zhangmu is asphalt, and it has cut down the total driving time across the plateau by several hours.

The section from Lhasa to Shigatse is around 271 kilometers, following the main road route to Tibet’s second city. Starting in Lhasa, the main route travels along the valley of the Kyi Chu River for about sixty kilometers, until the confluence of the Kyi Chu and the Yarlung Zangbo Rivers at Chushul (Quxu). From there, the road follows the Yarlung Zangbo River valley all the way to Shigatse, passing through Nyemo County and Rinbung County.

There is also a subsidiary branch of the Friendship Highway, which crosses the Yarlung Zangbo at Chushul, and heads south, crossing the high-altitude Kamba La Pass at 4,794 meters, one of the highest passes in the area of Lhasa. Cresting the pass, travelers get their first view of one of the most awesome sights in Tibet, the stunning Lake Yamdrok. One of the Great Three Holy Lakes of Tibet, along with Lake Namtso and Lake Manasarovar, the road, labeled as the S307, follows the shoreline for several kilometers along its northern shores, before crossing the Gesang Bridge and heading south to Nagarze. From there, the road heads more westwards, to get to the city of Gyantse, 263 kilometers from Lhasa and the home of the Gyantse Kumbum, the 32-meter stupa that is the only one of its kind in Tibet. 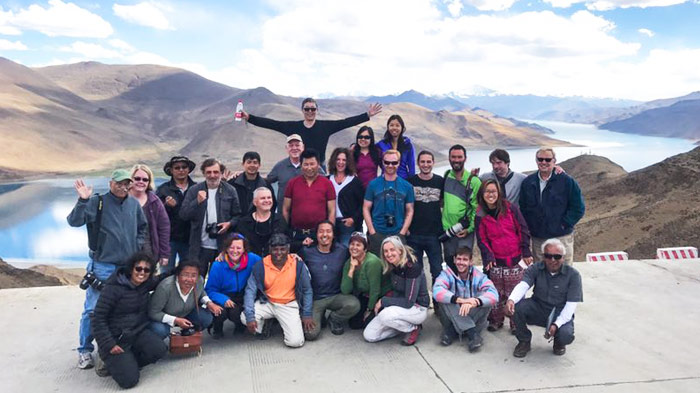 When you travel from Lhasa to Shigatse by road, you will pass the beautiful Lake - Yamdrok.

From Gyantse, the road then turns northwest for around 93 kilometers to reach the city of Shigatse. The southern route, which is the one most used for tourists to Tibet because of the stunning views of Lake Yamdrok and the Karola Glacier, is actually 356 kilometers long, more than 80 kilometers longer than the main route.

While both routes are actually short enough to be driven in less than six hours, most travelers along the roads take all day to get from Lhasa to Shigatse, as the stunning sights of the Tibetan plateau along the roadside are great places to stop and take photos, and are some of the plateau’s main attractions for tourists.

Lhasa to Shigatse by Cycling Distance: 271km and How to Travel

A tour of Tibet cycling from Lhasa to Shigatse takes you out onto the high-altitude Tibetan plateau in a way that no car or bus can ever manage. While touring in a car can be amazing in itself, there is nothing as stunning as actually riding through the spectacular Tibetan landscape on a bicycle, being able to stop whenever you want and actually being out in the air and riding along the road under your own steam. 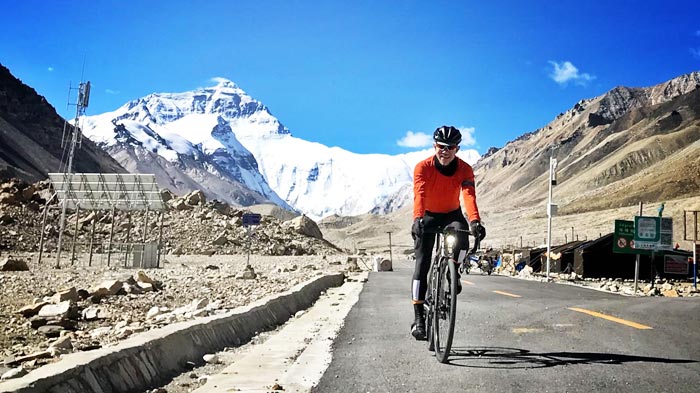 One of our clients has successfully cycled from Lhasa to Mt.Everest Base Camp, Shigatse.

The usual route for tourists cycling from Lhasa to Shigatse follows the route through Gyantse, as the Gyantse Kumbum and Pelkor Chode Monastery are two of the most spectacular sights to see along the route.

The route through Gyantse to Shigatse by bicycle normally takes around five days to complete, traveling between 54 and 94 kilometers a day. The first pass you travel over is at Kamba La, at 4,794 meters, just before you get to Lake Yamdrok, while the second high-altitude pass, the Karo La Pass, is much higher at 5,010 meters above sea level. One of the highest passes in the area, it is also the stopping point from which to view the stunning and pristine white Karola Glacier.

What Travel Documents Do I Need for Lhasa Shigatse Tour?

If you are only planning to travel as far as Shigatse on your tour, then you will not need all of the permits and passes for Tibet that would be required for other tours of the plateau. The first thing you will need is your Chinese Entry Visa, which can be obtained from your nearest Chinese Embassy before you leave home.

The main permit for all travelers to Tibet is the Tibet Travel Permit (TTP), which is required for all international tourists to Tibet. Obtained using scanned copies of your passport and visa, we will make the application on your behalf with the Tibet Tourism Bureau in Lhasa, who provide the permit. Processing normally takes up to 20 days to have the permit released, so it is essential that you book your Tibet tour in plenty of time to enable us to obtain your permit before you travel.

The Tibet Travel Permit is the most essential permit you need for Tibet, as it is required for travel into Tibet and around the area of Lhasa City. In fact, without the TTP, you cannot even board the flight or train to Tibet.

You will also need the Alien’s Travel Permit, which can be obtained once you get to Lhasa by your tour guide during your acclimatization period. The Alien’s travel Permit is required for all travelers heading out of Lhasa and into the opened areas of Tibet that are not part of Lhasa or the Military Restricted Areas.