Lhasa Altitude: how to visit Lhasa attractions with varied elevations

Lhasa, the capital of the Tibet Autonomous region of China, is one of the most stunning capital cities in the world, as well as being the world’s highest capital city. Home of the sacred Jokhang Monastery and the spectacular Potala Palace, the seat of ancient governance in Tibet, this beautiful city lies a head and shoulders above the rest of the world’s capitals, literally.

Traveling to Tibet from either Nepal or China always means a stay in this stunning capital city. All tours to Tibet either start or finish in Lhasa, as it is the location of the plateau’s only international airport and the terminus of the famous Qinghai Tibet Railway. And whether you start or finish your trip in the city, you will never have an experience like it.

At an altitude of around 3,656 meters above sea level, Lhasa City is high up in the air on the high-altitude Tibetan plateau. The capital of Tibet, this stunning city is one of the best places to visit in Asia, and a must-visit place for anyone traveling to Tibet.

Filled with spectacular attractions and amazing views of the mountains that surround the city, it is the top destination for Chinese and international tourists heading for the plateau, lying in the midst of the Nyenchen Tanglha Mountains. Set in a stunningly beautiful valley, through which the Lhasa River, or Kyi Chu, flows, Lhasa is the center of Tibetan culture and the heart of the Tibetan Buddhist religion.

The Lhasa River is one of the major tributaries of the Yarlung Zangbo River, known further downstream as the Brahmaputra, one of the longest rivers in Asia. Set in one of the plateau’s most stunning valleys, the city is surrounded by lush wetlands to the northwest, and the beauty of the Lhasa River to the south, with a stunning plain to the west where the Duilong Chu converges with the Lhasa River as it runs southwest to its convergence with the Brahmaputra. To the north, and to the south on the other side of the river, lie the Nyenchen Tanglha Mountains, which form part of the eastern end of the Himalaya ranges. The valley cuts through the mountains, with the holy Lake Namtso to the north and holy Lake Yamdrok to the southwest.

Lhasa Valley is considered to be relatively low altitude in comparison to the western areas of Tibet, and is actually lower than the average altitude of the plateau, which is around 4,800 meters.

Top 10 Lhasa Attractions and Their Altitudes

The landmark symbol of Tibet and the city of Lhasa, this stunning palace lies on the Red Hill above the city of Lhasa at an altitude of 3,700 meters. Built in the 17th century by the fifth Dalai Lama as the new seat of government for Tibet, it was constructed on a much older site, the former palace fortress of the Tibetan king, Songtsen Gampo, from the 7th century. 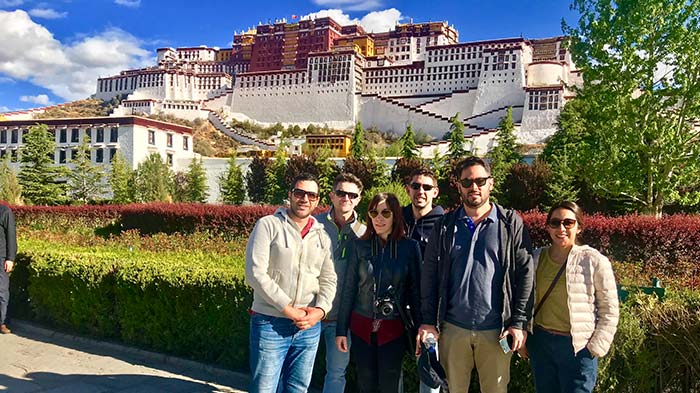 Set around two kilometers to the north of the center of Lhasa, the Potala Palace is now a UNESCO World Heritage Site, with a stunning square at the foot of the hill in front of the palace. At the back of the palace there is the beautiful Zongjiao Lukang Park, which is quiet and peaceful and free to enter and relax in. The best view of the Potala is from the nearby Chagpori hill, at an altitude of 3,7325 meters.

Built more than 1,300 years ago by the Tibetan king, Songtsen Gampo for his Nepali and Chinese brides, the Jokhang Temple is the most sacred building in Tibet, and the heart of Tibetan Buddhism. The temple, which houses one of the oldest known statues of Buddha, the Jowo Rinpoche, lies at an altitude of 3,600 meters, and is surrounded by a series of streets known as Barkhor Street, which form the ritual kora route around the temple.

On any day, you can see the huge number of pilgrims that travel across the plateau to the temple, prostrating themselves in the square before its gates in reverence and prayer, before performing the kora around the temple and entering to receive the blessings of the lamas that administer the temple.

One of the Great Three holy lakes of Tibet, Lake Namtso lies around 200 kilometers to the north of Lhasa, by road. At least 4-5 hours of driving, the trip is worth it to see this stunning lake set high on the Tibetan plateau, at an altitude of 4,718 meters. The largest lake in Tibet, and the second largest lake in China, access to the lake can only be reached by heading through the high-altitude Nagenla Pass, at 5,190 meters above sea level. 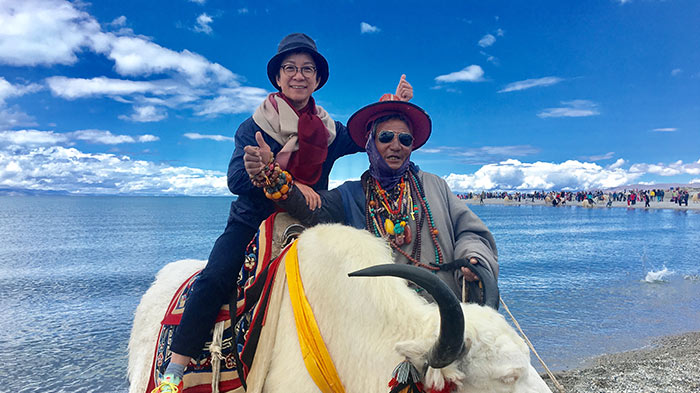 Riding yak at the shore of Namtso Lake

To the east of the lake lie the northern edges of the Nyenchen Tanglha Mountains, while to the southwest is the eastern anchor of the Gangdise Mountains, the home of Mount Kailash. To the north of the lake lies a hilly plateau plain area that stretches as far as the eye can see.

Lying around the famous and sacred Jokhang Temple, at an elevation of around 3,650 meters, Barkhor Street is the ritual kora route around the temple for pilgrims and devout Buddhists. However, this unique street is much more than that. It is also the center of the trade area of Lhasa, and a place where you can buy almost anything, from locally made noodles to hand-made Tibetan knives. Hundreds of handicraft shops and vendor’s stalls line the street, and if you are looking for souvenirs of your trip, there is no better place to look. You can even find shops and workshops that display and teach Tibetan arts, such as the famous and religious Thangka paintings that can be seen in almost every monastery in the region.

Together with Ganden Monastery and Drepung Monastery, Sera Monastery makes up the Great Three holy monasteries of the Gelugpa School of Tibetan Buddhism, the largest of all the schools in Tibet. Located on the Serawoze Mountain at an altitude of 3,700 meters, it is around three kilometers from the northern suburbs of the city.

The monastery is famous for its debates on the philosophy and theology of the Tibetan Buddhist scriptures, which takes place every afternoon in the debating courtyard of the monastery. Here, amidst a stunning setting of local trees and gravel pathways, the young monks learn how to debate on the scriptures of Tibetan Buddhism, putting their arguments to the older monks that train them, as a way of learning the true teachings of the scriptures.

Drepung Monastery, another of the Great Three, is the biggest monastery in the world, and the primary monastery of the Gelug School, at an altitude of 3,800 meters above sea level. Lying at the foot of the Gambo Utse Mountain, it is around 10 kilometers from the center of Lhasa, to the south.

Built on the mountainside, the monastery has often been likened to a heap of rice lying on the side of the hill. With mountains on three sides, the monastery looks out onto the sloping lands of the south, covered with lush grasslands, tall trees, and squat shrubs.

The third of the Great Three monasteries, Ganden Monastery lies at an altitude of around 3,800 meters. Sitting atop the mountain known as Wangburi, the monastery is an ancient temple built in the 15th century by the great Je Tsongkhapa, the founder of the Gelug School of Tibetan Buddhism. 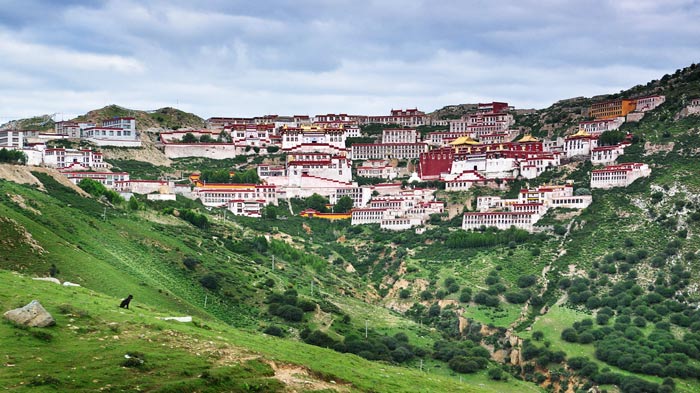 Set in a semi-circle around the top of the hill, Ganden Monastery is one of the main monasteries of Tibetan Buddhism, and its name, which translates as “joyful, is the Tibetan name for “Tusita, the heaven where the Maitreya Buddha is said to reside, awaiting his reincarnation as the final Buddha to walk the earth.

The former summer palace of the Dalai Lama and the former seat of Tibetan government, after taking over from the Potala Palace in 1755, Norbulingka is the site of the largest and most beautiful botanical gardens in Tibet. In the western suburbs of Lhasa, at an altitude of 3,650 meters above sea level, the palace gardens are known for being a popular place for summer strolls and picnics.

The stunning botanical gardens cover an area of around 360,000 square meters, and are considered to be the world’s highest botanical gardens, with more than 100 species of trees residing in the grounds. Every year, the gardens and palace plays host to the local Shoton Festival, one of the most important festivals in Tibetan Buddhist culture.

Lying around 90 kilometers to the north of Lhasa, on the road to Lake Namtso, are the famous Yangpachen Hot Springs, which is also the site of the only geothermal power plant in Tibet. At an altitude between 4,290 meters and 4,500 meters, the variety of hot springs are a popular attraction for tourists and locals alike, as the springs are said to have healing properties for a variety of ailments.

Built in 1977, the geothermal power plant was the first of its kind to be built in all of China, and provides electricity for all of Lhasa prefecture-level city. At thirty degrees, the water is quite hot, and is actually above the boiling point of water at this altitude above sea level.

The lesser-known sister to the Jokhang Temple, the Ramoche temple was built at around the same time, by the Tibetan king, Songtsen Gampo. However, for Tibetan, this is regarded as the second most sacred temple in Tibet, after the Jokhang, and is often known as the “small Jokhang by the locals. Located a little to the north of the Jokhang Temple, at an altitude of around 3,600 meters, it houses the statue of the Jowo Mikyö Dorje, the statue brought to Tibet in the 7th century by Princess Bhrikuti of Nepal, one of the brides of Songtsen Gampo.

How to prevent altitude sickness in Lhasa Tibet?

While Lhasa has its awesome attractions, you should not forget that it lies at an altitude much higher than that which you are used to. In the thin air and high altitude of the plateau, there is a high risk of altitude sickness, if you are not careful.

However, there are ways to help reduce the risk of altitude sickness, though there is actually no guaranteed way to prevent it. Have a full physical examination before you travel, from your own doctor, to check how likely you are to suffer from altitude sickness, if you are aware of the symptoms, and know that you may get them, then you can be better prepared for it if it happens.

Avoid strenuous exercise, smoking, alcohol, high-caffeine drinks, and sedatives, as these can all exacerbate altitude sickness. High-calorie and high-protein foods can help your body adjust to the higher altitude faster, but should be taken in moderation, not in excessive quantities.

There are drugs available that can have some effects on altitude sickness, though they do have some side effects that can be detrimental. Always speak to your own doctor before taking these drugs. While they are freely available in Asia as “over-the-counter medications, in most western countries, they are prescription-only drugs. - Know more about How to Prevent Lhasa Altitude Sickness for the Newly-Arrived Tourists

0 Comment ON "Lhasa Altitude: how to visit Lhasa attractions with varied elevations"