Do you want to know your pre-life, present-life and next life? A Lhamo Lhatso Lake trekking tour might give the answer. Located at Gyaca County of Lhokha Prefecture in Tibet, Lhamo Lhatso Lake is regarded as the most sacred lake in Tibet, where senior Tibetan monks and pilgrims go for visions to assist in the discovery of reincarnations of the Dalai Lamas. According to legend, Palden Lhamo is the female guardian spirit of the sacred lake and she protects the reincarnation lineage of the Dalai Lamas.

How to Get to Lhamo Lhatso Lake

First, you should spend at least one day in Lhasa for full acclimation and then take a bus or rent a car from Lhasa to Tsedang, the birthplace of the earliest Tibetans and the political and economic center of Lhokha Prefecture. The bus from Lhasa to Tsedang starts at 9:30am and only takes 4 hours to Tsedang thanks to the good road conditions. On the way, you can make a detour to the first temple in Tibet, Samye Monastery.

After spending a night at Tsedang, take another bus from Tsedang to Gyaca, starting at 8:00am. It takes around 7 hours from Tsedang to Gyaca due to the poor road condition. There are a few guest houses at Gyaca. It costs 10 - 15 yuan for a bed for the night. The rooms are clean and some have TV. The Lhamo Lhatso Lake is around 40-50km from downtown Gyaca. You need to take a bad mountain road to Chokorgyel, where you can hire a horse. Your trekking starts from here. 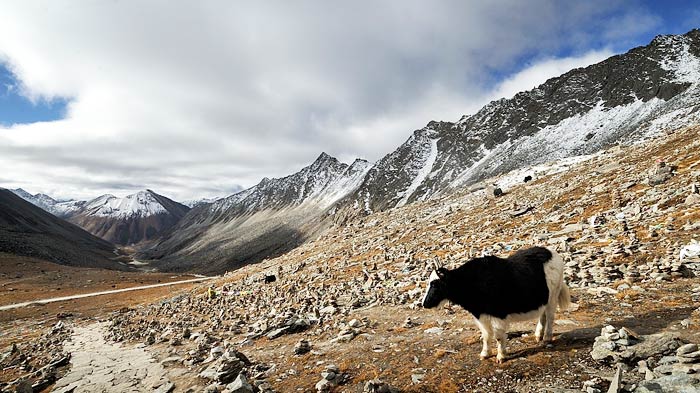 Wild yaks on the trekking road to Lhamo Lhatso Lake.

You can trek to Chokorgyel along the charming Gyaca Valley, and it takes at least two days to finish this trek. This is the most popular route among international tourists and there are several Tibetan villages on the way. But local Tibetans cannot speak English, so it is very difficult to communicate with them without an English-speaking Tibetan guide. During the trekking, you need to pay attention to the wild animals and wild yaks. If they get scared, they can become very fierce and dangerous.

You can take a truck to Chokorgyel in March and August when there are many trucks into the mountain areas to carry worm grass. It costs around 15 - 20 yuan per person for hitching on a truck to Chokorgyel. However, from June to September, the road condition would get very poor due to heavy rainfall and it is difficult to find a truck on the road.

It is a four-hour trek from Chokorgyel to Lhamo Lhatso Lake. You can hire a horse at Chokorgyel, costing 10 - 20 yuan for each horse and an extra 20 for the groom. You need to climb Lhamo Lhatso Mountain (5,200m) to get to the lakeside. At the top of the mountain, you can see a calabash-shaped lake. That is Lhamo Lhatso.

The trek to Lhamo Lhatso starts from the Small village of Woka, and the first day takes you to Dabo, another small settlement around 26 kilometers away, at around 3,900 meters. The hike takes you along small winding mountain paths and runs past the stunning Qusang Temple, where Tsongkhapa once stayed when teaching Buddhism in Tibet.

After camping for the night, the trek continues early in the morning to watch the sunrise over the Gyeluo La Snow Mountain, which peaks at around 5,400 meters. Then you begin the day’s trekking in earnest, following the bubbling brook along the valley and through clumps of azalea trees. The route then climbs up to the Nayu Valley, at around 4,100 meters, where you will stop for the night. You will also have the chance to visit the beautiful an unspoiled Nieka Waterfall.

The third day of trekking takes you around 23 kilometers closer to the lake, and takes around 7-9 hours, depending on your own speed. From the village, you will trek up and down the hills along the mountainous ridge above the valley, though the slope is fairly gentle most of the way. After leaving the ridge, you will set up camp in the Dagu Valley, close by the rushing waters of the Yarlung Tsangpo River.

Today’s trek is mostly downhill, and you will reach the Lhamo Lhatso lake after around 2-3 hours. The lake, which lies at an altitude of 4,930 meters above sea level, is one of the most stunning sights on the plateau, and a spiritual location that has been used to find the reincarnation of the Dalai Lamas for hundreds of years. 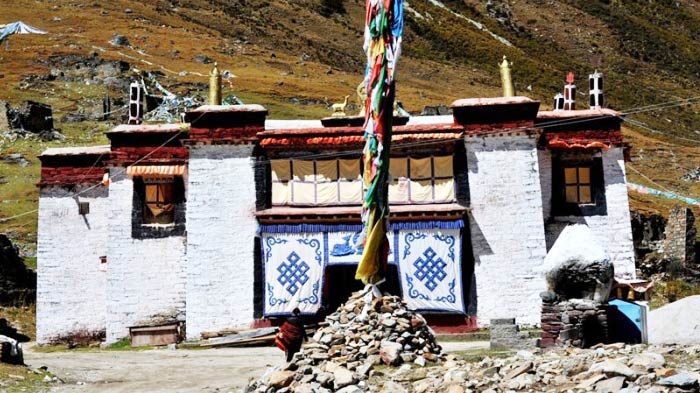 You will pass by the small Chokorgyel Monastery during your Lhamo Lhatso trek.

After spending the night at the lakeside, you will take the last day of the trek heading downhill from the lake to the village of Cuijiu, around 24 kilometers away. The route to the village and your pick up by car takes you past the beautiful mountainside Chokorgyel Monastery, just a few kilometers from the village. You will be able to look around the monastery for a while, before heading to the village, and then back to Tsedang by car.

Tsedang is a prosperous town with lots of restaurants and hotels. The hostels in Tsedang are quite good and it only costs around 40 yuan for a bed. The rooms are usually equipped with TV, but no private bathroom. There are also many shops in Tsedang for you to buy any necessities that you have forgotten to pick up in Lhasa.

There are only two small hostels in Chokorgyel, costing 10 - 15 yuan for a bed for the night. You can also camp on the grassland near the local government office. It costs 10 yuan to pitch your tent there. There are also two tent shops where you can buy some daily necessities, such as batteries, instant noodles, beer, and so on. But do not expect to buy everything you need here, as the stocks of these tent shops are very limited due to the remote location.

For the four nights of your trek to Lhamo Lhatso, you will be camping in tents at the various villages you will pass along the trail. Unfortunately, none of these villages have guesthouses for travelers, as this is not a developed area, which only adds to the beauty of the whole trek.

Lying in the area of the far east of Lhoka Prefecture, the best time to trek to the Lhamo Lhatso lake is in the spring or autumn. From April to May and October to November, the weather is relatively mild, compared to the summer and winter, and there is little rain in the area at these times. Temperatures range from 4-5 degrees at night to around 12-14 degrees during the daytime, and the sun is often bright and shining down on the trail, with clear skies for most days. 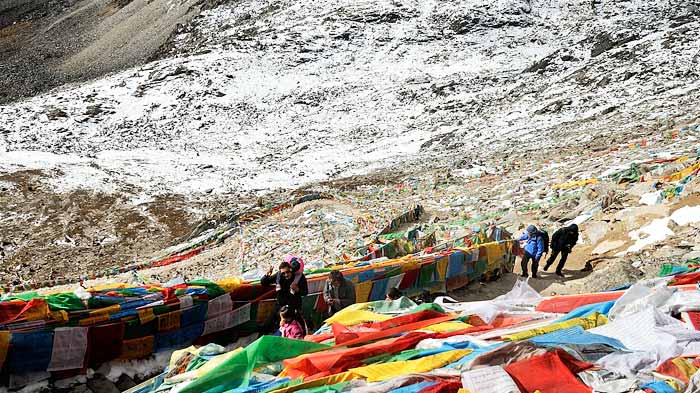 You can have a Lhamo Lhatso Lake trek in early winter, from December to mid-January.

Summer is the rainy monsoon season in Lhoka, and is wetter than in Lhasa, which makes the trek almost impossible thanks to the mountain landscape of the trekking route. Slippery rocks, running streams, and even landslides are a possibility on this route in the rainy season.

It is still possible to take this trek in the early part of the winter, from December to mid-January, though it is going to be a lot colder. Temperatures are often below freezing at night, and rarely get up above 7-8 degrees during the daytime. However, the dry weather and sunny skies do make it feel a little warmer, and the snows do not usually come until around the end of January to February.

What to Pack for Tibet Lhamo Lhatso Trekking Tour

Lhamo Lhatso does lie at a rather high elevation, so even if you are trekking in the summer, you will find that you need to have some warm clothing with you, as the temperature can drop at night to be fairly cold. Aside from a good pair of trekking boots and some warm and comfortable socks, you will need to have a couple of pairs of warm trekking pants, and several layers of warm clothing, so that you can better regulate your temperature during the trek. Layers are always the best option, as it is easier to add or remove them when you are too hot or too cold.

While the weather may feel a little cold sometimes, at this altitude, you will be hit by the harsher rays of the sun. A good wide-brimmed hat, sun cream, moisturizer, and sunglasses are essential when trekking in these higher remote regions of the plateau, to prevent sunburn and skin problems. Lip balm can also be useful, as the winds can get pretty harsh too.

While the route to Lhamo Lhatso is not overly strenuous, it is a hard trek, along rough terrain that has seen few people. You may find that a couple of trekking poles can be useful in aiding you when scrambling over the rough and rocky terrain of the trek.

Altitude sickness is an important factor of this trek, as you travel from low to high elevations along the length of the trek. While the increase is not as high as some treks in Tibet, you will be ascending almost 2,000 meters over the course of four days. In these conditions, you will need to be aware of the effects of altitude sickness, and how to prevent it. It is essential to keep an eye on your own condition, and when possible, stop and rest to allow the body to get used to the higher altitudes as you climb.

If you are thinking about taking medicines that are available to help prevent and treat altitude sickness, then you should consult your own doctor before you leave for Tibet. While drugs such as Diamox have been effective in some people in relieving the symptoms of altitude sickness, and even preventing it, you should speak to your own physician first to ensure you are able to take it without side effects.

If you are looking for one of the most spiritual treks in the world, then this epic adventure to the lake of discovery for the Dalai Lamas is one of the best options you have in Tibet. An amazing trek through some of the most unspoiled countryside in Tibet, along valleys and over ridges where few but the monks and lamas have previously trodden, this route is a special experience in Tibet, and one that not many international tourists take. The trek itself is rated as moderate to arduous, so it is essential to have a good level of physical fitness.