Kham Eastern Tibet: where is Kham and how to plan an eastern Tibet Kham tour?

Kham is a region of the ancient Tibetan Empire, and one of three regions of Tibet, which included Amdo in the north and U-Tsang in the west. Originally, Tibet was split into four areas, and U and Tsang later being combined to make the region of U-Tsang.

Kham Map and History: where is Kham Tibet?

Once a major area of ancient Tibet, Kham is the easternmost part of the Tibetan Empire. The area stretched into mainland China, covering most of the west of Sichuan Province, as well as parts of Northern Yunnan. Kham borders Amdo to the north, U to the west, Sichuan to the east and India and Myanmar to the south. Kham is broken up into 54 counties spread across 6 prefectures of China. These prefectures make up the Kham region of Tibet, which covers an area of around 900,000 sq km (348,000 sq mi) and a population of around 2 million. 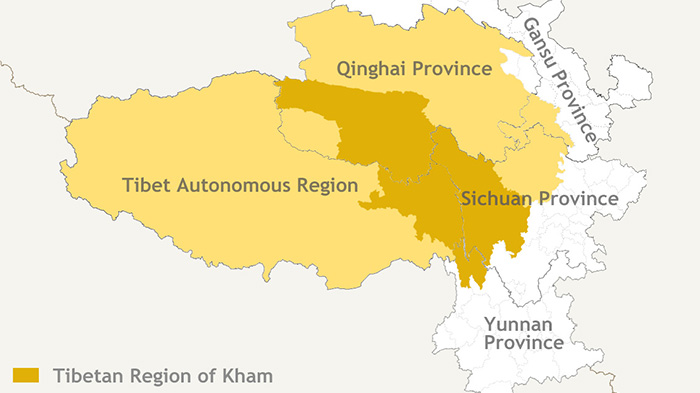 From the 10th century on, Kham was never under the authority of Lhasa for an extended period of time or under China until the communist takeover in the 1950's. Kham was never ruled by a single leader, but was split up into over 2 dozen separate kingdoms each with its own king. In recent centuries the most powerful kingdoms in Kham were those of Chakla, Dege, Lhato, Lingtsang and Nangchen. Part of the reason that Kham never was under the authority of Lhasa was because of the sect of Buddhism followed in Kham.

Most of Tibet follows the Gelugpa sect of Tibetan Buddhism while older schools of Buddhism such as the Kagyu, Nyingma and Sakya (around Jyekundo) are followed in Kham. The ancient Bon religion is still practiced in Nyingchi Prefecture, also known as the Kongpo region. In 1939 the government of the Republic of China created Xikang province with Kangding as the capital. Xikang covered the far eastern region of Kham. This province lasted until 1954 when Xikang was merged into Sichuan Province.

There are no large cities in Kham, but there are several important towns. Chamdo (3300m) is the unofficial capital of Kham. Located in the eastern region of the TAR, it sits on the banks of the Mekong River with a population of over 50,000. The Gelugpa monastery of Jampaling rises above the town and has around 850 monks. Dege (3200m), located near the Yangtze River, is considered the cultural heart of Kham.

Kham has a wide range of geography. Most of Yushu and Nagchu prefectures sit above 4200m (13,780ft) with many mountain peaks over 5500m (18,044ft). One of the highest and most famous mountains in this area is Gela Dandong which rises to 6621m (21,723ft). Many of the Tibetans found in Yushu and Nagchu are nomads, but large areas are uninhabited. Nyingchi Prefecture is home to Mt. Namche Barwa (7782m) and Mt. Gyala Pelri (7294m). The river valleys around these two mountains drop as much as 5000m in places, making the towns of Nyingchi prefecture some of the lowest in Tibet. Nyingchi has thick forests, lots of rain and a mild climate. Chamdo and Ganzi prefectures sit mostly between 3200m and 3600m (10,500ft to 11,810ft). The Yangtze and Mekong Rivers flow through these prefectures making the region known as "the bread basket of Tibet". The highest mountain in Kham, Minya Konka (7556m/24,790ft), is found in Ganzi prefecture.

Qinghai Nianbao Jade Scenic Area: Located at the junction of Qinghai and Sichuan, in a very remote area, the Nianbao Fairy Lake is a major attraction that is rarely visited by international travelers. Surrounded by snow-capped mountains and unpredictable weather, this stunning lake is one of the most beautiful in Tibet.

Yading Nature Reserve: located within Riwa Township, Yading is often called “The last piece of pure land on the planet”, and is made up of the three holy mountains, Chenresig, Channa Dorje, and Jampelyang, all of which lies at altitudes above 6,000 meters. Milk Lake, Five-color Lake, Luorong Grassland, and Changgu Monastery are also popular spots in the reserve.

Jiuzhaigou National Park: Literally meaning “Nine Village Valley”, Jiuzhaigou is well known for its stunning multi-level waterfalls and is listed in the UNESCO World Cultural Heritage Sites in China. Three valleys form a natural Y shape, and it has become a popular area for trekking.

Tagong Grasslands: Tagong literally means ”A place favored by the Buddha”, and this tiny village in the Garzê Tibetan Autonomous Prefecture is surrounded by vast grasslands, green forests, and glacial mountains, as well as being the location of the famous Tagong temple.

Riwoqe Monastery: founded in the 13th century as an offshoot of the Talung Monastery, Riwoqe Monastery is a huge monastery that towers over the small Riwoqe Town. Now rated as one of the most impressive monasteries in Tibet, it houses around 500 monks today.

Rawok Lake: Lying below the famous Lhegu Glacier, Rawok Lake sits at an elevation of 3,850 meters above sea level. A perfect scene of Swiss Alpine lakes and mountains, the stunning lake is surrounded by glaciers which fill the laje with their melted ice.

Dukezong Ancient City: An ancient Tibetan town located in the area of what is now known as Shangri-La in Yunnan Province (formerly Zhongdian), Duzekong was once a key stopping point on the ancient Tea Horse Road that ran from China all the way to India.

Legend about Kham Tibetans (Khampa/Khamba) and their language

In China, there are many legends about people who were far way from diseases and live for a long time. The Khampa people are one of them. There is a legend that tells of the Khampa people never falling ill, which is one of the oldest legends of the area. Living on the lower eastern reaches of the plateau, the Khampa people were said to be the offspring of the god of war and the goddess of beauty, and were brave fighting men and stunningly beautiful women. 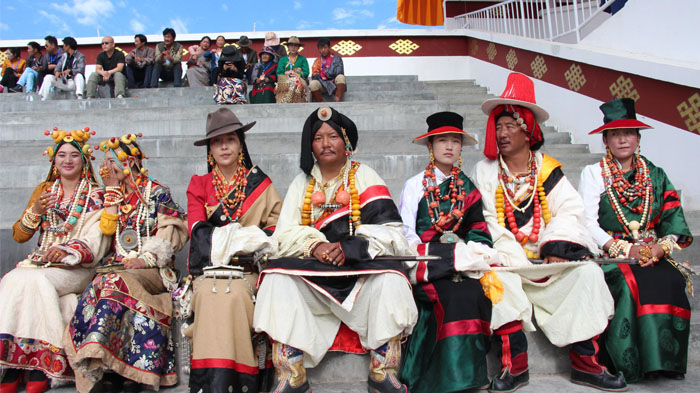 Local Khambas are well-dressed for the horse racing festival held in Bangda Grassland.

How to Plan an Eastern Tibet Kham Loop Tour

If you are planning a trip to the Khampa region of Tibet, then there is no better way than to take a spectacular tour with us. Our 20-day tour of the northern and eastern Kham region is one of the best ways to see the ancient region of Kham. Traveling from Lhasa, you will pass through Nyingchi to Chamdo, Markam, and Tengchen, passing through the vast Litang Grasslands, before traveling through Nagqu City to reach the stunning lake Namtso in the north of Lhasa. 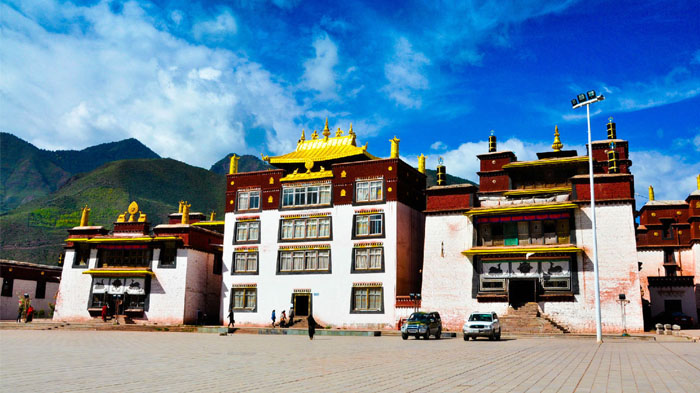 An amazing overland journey that takes you through the ancient areas of Kham, and lets you see how the Khampa people still live in the same way as their ancestors, this is great tour for photographers and those interested in the local Kham culture.

How to Get to Kham Tibet

Getting to Kham can be done by road or flight. The Chamdo Bamda Airport, which is located on the western bank of the Yuqu River in one of the valleys of the Banda grasslands, is only served by flights from Chengdu, Lhasa, Chongqing, and Tianjan, and offers domestic flights from Air China and Tibet Airlines. However, this airport is only open to domestic tourists, so the only way in is to drive for international tourists.

For those driving, you can get to Chamdo along the G318 Sichuan Tibet Highway from Lhasa. The road takes you through Nyingchi, to the town of Markam in Chamdo, and then heads north along the G214 to Chengguan Town. A distance of 1,112 kilometers, this trip takes more than 22 hours of continuous driving, and normally takes around 3-4 days to cover.

>> Further reading: Chamdo to Lhasa: how to get to Lhasa from Qamdo.

Kham is a cool and dry area of Tibet, and while it can be cold in the winter months, it is still possible to visit the area all year round. However, the best time of year is from May to the middle of October, when the weather is warmer and better for travel. The monsoon period in Chamdo is from June to August, with July being the wettest month with around 100mm of rain throughout the month. This lower rainfall for an eastern area of Tibet means that there are more sunny days in the summer months, which is a great time to visit the area. - See more details on Chamdo climate and weather .

What travel documents do I need for Kham tour?

As the area is part of the Tibet Autonomous Region, you are going to need to have the usual Tibet permits for travel. The Tibet Travel Permit, which is required to get into Tibet and travel in Lhasa, is obtained once you have booked your tour with us, and we will make the application on your behalf using scanned copies of your passport and Chinese Entry Visa.

A trip to Kham in Eastern Tibet is one of the most revealing tours you can take in Tibet, showing you the ancient culture of the Khampa people the last to be included in the Tibet Autonomous Region. And this beautiful and ancient land is one that will leave you forever breathless with its outstanding natural beauty.

0 Comment ON "Kham Eastern Tibet: where is Kham and how to plan an eastern Tibet Kham tour?"