Jokhang Temple History: Legends and History of the Holiest Temple in Lhasa

Lying at about 1,000 meters to the east of the Potala Palace, the Jokhang Temple is the oldest and holiest architecture in Lhasa with a long history of 1,400 years. Being the spiritual center and the ultimate pilgrimage destination for Tibetan, it has attracted many pilgrims to worship and circumambulating around.

As the existing most resplendent architecture constructed in Tubo Period (618 AD – 842 AD), Jokhang Monastery has been rebuilt and enlarged several times before taking into the shape we see nowadays. In the past centuries, it has gone through many trials and tribulations, covering itself with more legendary veils.

Also known in Tibetan as the Tsuglhakhang, the Jokhang Temple is the most revered religious structure in Tibet built by Tubo king Srongtsen Gampo in 652 to marry Nepal princess Bhrikuti. Along with Princess Bhrikuti also came an image of Akshobhya Buddha as her dowry, which was deified in a temple called Ramoche.

Later, to establish peaceful relationship with Chinese Emperor Taizong (627–650) of the Tang dynasty, Srongtsen Gampo married one of her daughter Princess Wencheng as his second wife. When Wencheng went to Tibet in 640 as the Chinese wife of the king, she brought an image of Sakyamuni Buddha as a her dowry as well. The Buddha is the life-size statue of 12-year-old Jowo Sakyamuni, the founder of Buddhism, thus making it the most precious statue in Jokhang Temple. 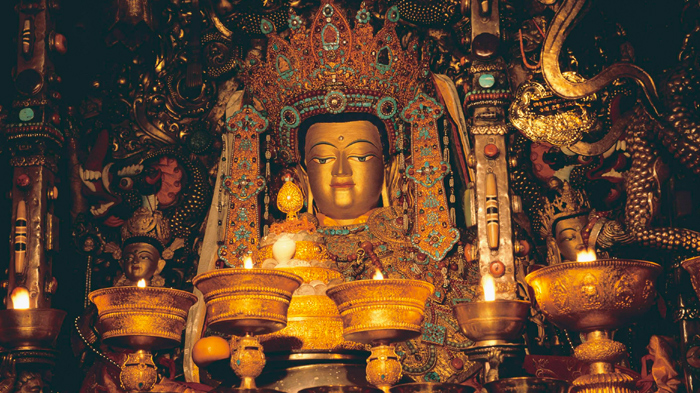 During the reign of King Tresang Detsan from 755 to 797, Buddhists were persecuted because the king's minister was hostile to Buddhism. During this time, the image of Akshobya Buddha in the Jokhang Temple was hidden underground, reportedly 200 people failed to locate it, and the monks in the Jokhang Temple were persecuted. During the anti-Buddhist activity of the late ninth and early tenth centuries, the Jokhang and Ramoche Temples were said to be used as stables.

As an existing Tubo architecture in Tibet nowadays, Jokhang Temple is also the first Tibetan civil structure of building and has architectural features originating from its Tibetan, Tang Dynasty Chinese, Nepalese, and Indian architects and craftsmen. Having gone through several reconstructions in Yuan, Ming, and Qing dynasties, it has become a massive building consisting of three floors and an open roof all filled with chapels and chambers. Taking up more than 25 thousand square meters in the downtown of Lhasa city, it has been another must-see attraction. 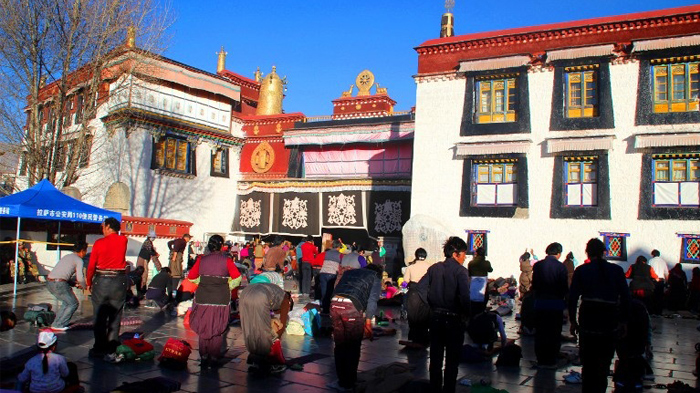 Pilgrims kneel at the entrance to the Jokhang Temple for worship

It’s said that to find a location for the temple, the king tossed his ring (a hat in another version) ahead of him with a promise to build a temple where the ring landed. Unexpectedly, the ring fell into a lake where a white stupa suddenly emerged. Thus the king used thousands of rams packing sand and soil to fill the lake and built a temple over it.

In another version of the legend, Queen Bhrikuti founded the temple to install the statue she had brought and Queen Wencheng selected the site according to Chinese geomancy and Feng Shui (also geomantic omen).The lake was filled, leaving a small pond now visible as a well fed by the ancient lake, and a temple was built on the filled area.

Princess Wencheng and the Devil

The third version, also may be the most widely-spread is that the construction of Jokhang Temple is related to Princess Wencheng. When the Tubo rulers first moved the capital to Lhasa, floods frequented many places in Tibet, leaving people little time or possibility to settle down for a good living. Princess Wencheng was an expert of astrology and divination in observing the movement of stars and the Yin-Yang Forces existing in nature and human affairs. She explained that the whole Qinghai-Tibet Plateau resembles in the shape of a lying devil, while Wutang, a lake in Lhasa, was just in the position of the "devil's heart", to counteract evil forces, a grand temple must be built upon the lake. Songtsan Gambo followed her suggestion to order the construction of a temple. At that time, the main transportation method in Tibet is to carry sand and soil by rams. In this way, the lake was filled and the Jokhang Temple was built on it. Check the tips for enjoying Princess Wencheng Real-scene Musical in Lhasa 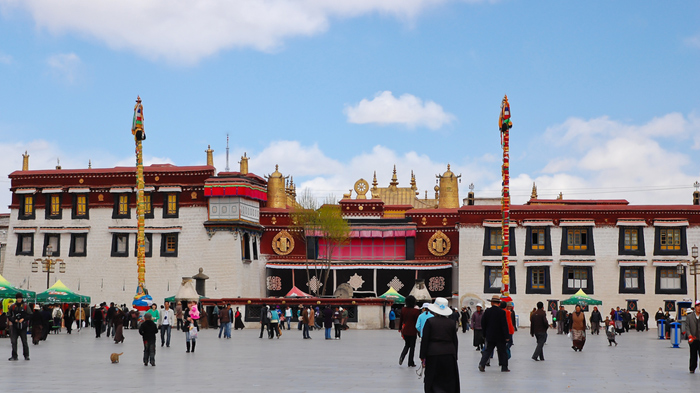 In fact, the name of “Lhasa” is evolved from Jokhang Temple. In the beginning, Lhasa was called “Rasa”. “Ra”means ram while “Sa”refers to land. Combining together, it refers to the land built by rams. Later, since the temple was built to house holy Buddha status and chapels, it was renamed into Jokhang, which means the house of Buddha. And the city was named Lhasa. “Lha” means Buddha and “Sa” means land in Tibetan language. Combining together, it represents the land of Buddha. This is the origin of name of Lhasa. Therefore, rams are worshiped by Tibetan until today, a unique custom representing the deep connection between Tibetan and them.

On February 17, 2018, the Jokhang temple caught a big fire before sunset in Lhasa, with the blaze lasting until late that evening. But luckily the fire was quickly extinguished at the late night with no deaths or injuries . More miraculously, no cultural relics are damaged during the fire. Many people believed that, this the manifestation of the divine.

In Jokhang Temple, there are many highlights worth seeing: the unique architectural structure, the priceless life-sized Sakyamuni statue, precious cultural relics, wood carving and murals,etc. Join in the crowd of local pilgrims in the morning to experience the peace and sincerity in the temple will also be a spiritual baptism. 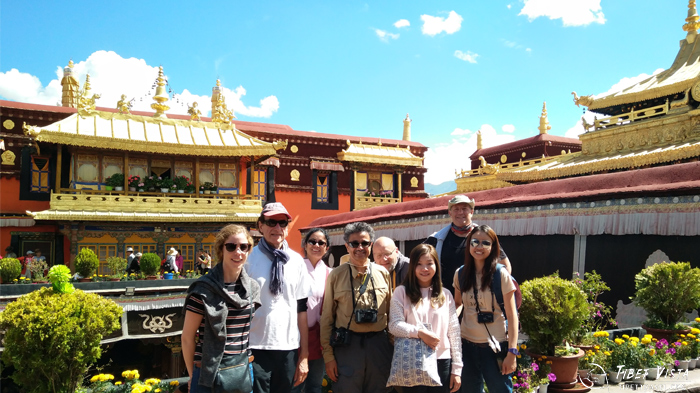 Tourists are taking pictures on the open roof of Jokhang Temple

If you are here during Tibetan New Year, you’ll be lucky enough to join the celebration held in Jokhang Temple. Hustling crowds wearing traditional Tibetan costumes come to the temple for worship and thousands of monks come to perform colorful religious activities in and around the Jokhang will be a visual and spiritual feast for every traveler. You will be infected with the joy and jollification permeated in the air. To help you better enjoy your Jokhang Temple tour, here are some tips for you:

1. In the morning, from 08:00 to 11:30, it's open to religious people. From 11:30 to 17:30, it's open to tourists but some chapels will be closed in the afternoon. It’s advisable for you to arrive at 8 am to watch the pilgrims perform their devotions, and then visit the interior in the afternoon.
2. Another 90 RMB for a permission card of taking photos inside the main hall. No flash inside the hall. However, you are permited to take photos in the square and golden roof.
3. Flashlight or head lamp can be very useful in temples. Carry with you some lighting tools to see clearly some important wall paintings, sculptures and other cultural relics.
4. After entering the temple, you must walk clockwise from left to right.
5. The ticket is for 85 RMB per person. You are highly recommended to learn more history and culture about Jokhang Temple before visiting it.

0 Comment ON "Jokhang Temple History: Legends and History of the Holiest Temple in Lhasa"