For every traveler to Jokhang Temple, the most scared statue of Buddha - The Jowo Shakyamuni is a must-see. Seated in the main hall in the ground floor, it’s prostrated by endless stream of devotees every day. Being the only one that has been blessed by Shakyamuni himself, the statue occupies the pride of the place.

Who was Buddha Shakyamuni?

Siddhartha Gautama, also known as Shakyamuni founded Buddhism in 6th or 5th century B.C. in Kapilavastu (border between India and Nepal). During the time of the Buddha, there was only one school of Buddhism, which is the one that the Buddha taught. However, over time Buddhism was spread to different Asian countries and regions like Nepal, Bhutan, Thailand and Tibet, China and there came to be different sects of Buddhism. But in the eyes of Buddhists, Shakyamuni has the supreme status and is hailed as Buddha.

The Jowo Shakyamuni, or Jowo Rinpoche (Rinpoche means “precious one” in the Tibetan language), is a larger than life-size image of the historical Buddha Shakyamuni housed in the Jokhang Temple in Lhasa, Tibet. It’s a 1.5-meter tall gilded bronze statue shaped as when Shakyamuni was 12 years old. 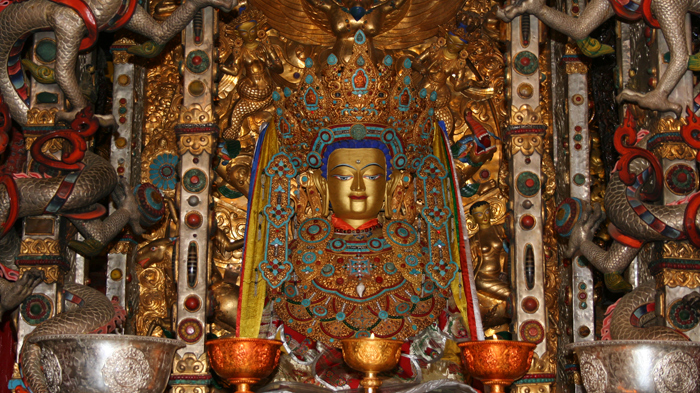 The Jowo Shakyamuni is seated against a resplendent gold and bejeweled throne. It is made of gilt metal, making it an image of gold hue with shocking blue hair. It is seated with his legs in the lotus position. His left hand is in the mudra (hand gesture) of meditation while his right hand is in the gesture of “calling the earth to witness”. The two gestures together signify the moment of the Buddha’s enlightenment. Adorned with semiprecious stones, pearls, jewels and paint, the Buddha is wearing a thin monk’s robe, which drapes over his body and covers his left shoulder. When dressed, Jowo Shakyamuni is presented with a magnificent jeweled crown and robes, whereas the resplendent crown and robes that the sculpture is seen wearing today are much later additions. In a word, it’s a statue in an elaborate setting.

Flanking the Buddha are two ladders set for pilgrimage to climb to offer khatas or head against the Buddha by forehead for blessing. Behind the life-size statue, there is another Shakyamuni Buddha which is said having been epiphanic to guard the life-size Buddha.

The Jowo Rinpoche statue has a long history and is said to have been personally blessed by the Buddha. Initially, it was made in India and owned by the king of Magadha, an ancient Indian kingdom. Later, it was given to the emperor of Chinese Tang dynasty as a gift. When Princess Wencheng came to Tibet to marry with Tubo king Songtsen Gampo, the status was brought by her as the dowry and was set in Ramoche.

The sculpture in its original form was likely made sometime during the early to middle 7th century C.E. and is believed to have been carved by the celestial architect Viswakarma in India during the lifetime of the Buddha Shakyamuni. In the following generations, it has gone through several restoration and reconstructions and it’s not known what the image may have originally looked like. The most recent of renovation took place after the Cultural Revolution, nonetheless, the continued restoration and veneration of the Jowo Shakyamuni over the course of its 1,300 year history is a testament to its religious and cultural importance in Tibet. 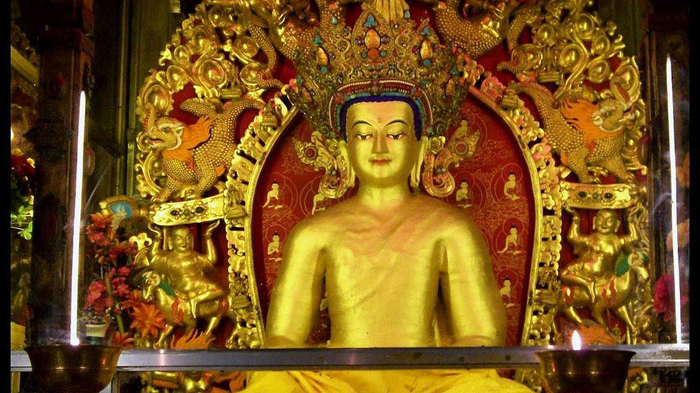 In addition to the 12-year-old Jowo Rinpoche statue, an 8-year-old life size statue of Jowo Rinpoche was also brought by Nepal Princess Bhrkuti when she was marring Songtsen Gampo. The statue is called Jowo Mikyö Dorje. At first, it was enshrined in Jokhang Temple. During Mangsong Mangtsen's reign (649-676), because of a threat that the Tang Chinese might invade, it’s said that both the Jowo Rinpoche statue and Jowo Mikyö Dorje were buried underground in the Jokhang Temple.

Centuries later, when Princess Jincheng, another Tang dynasty princess came to Lhasa, she placed Jowo Shakyamuni in Jokhang Temple and transferred Jowo Mikyö Dorje to Ramoche. Until today, the twin Buddhas are the two most sacred representations of the Buddha in Tibet.

Why is Buddha Shakyamuni Scared?

Among the three Buddha, 12-year-old gilded bronze statue is most exquisite and exalted, and it’s also the most admired one by Buddhists. In their eyes, this statue is their strongest spiritual pillar so they call it as Jowo Rinpoche. “Jowo” means the most revered and respected while “Rinpoche” means the treasure. In this name, we can find the supreme status of the Buhhda among the Buddhists.

Except for its rareness, the craftsman of the statue also makes it precious. It is believed that this Buddha was carved by the celestial architect Viswakarma in India. Texts such as the 11th century Vase-Shaped Pillar Testament suggest that the Jowo Shakyamuni was sculpted from a life portrait of the Buddha. Therefore, the religious significance and sacred power of the Jowo Shakyamuni comes from its actual likeness of the Buddha as well as its having been carved by Viswakarma.

Although the Jowo Shakyamuni is not the earliest image of the Buddha, it still holds cultural and religious importance to those who worship the image. For those Buddhists, seeing Buddha Shakyamuni equals to see the real person of Shakyamuni 2,500 years ago and will be blessed by it.

Travel Tips: The passage circling the central Buddha Shakyamuni hall is called Nangkhor. Nangkhor kora is the cream and highlight of Jokhang Temple tour that you shouldn’t miss. Join in the pilgrims to twirl 380 prayer wheels one by one, you can pray for your beloved ones. - Know more about Lhasa Pilgrimage Circuits 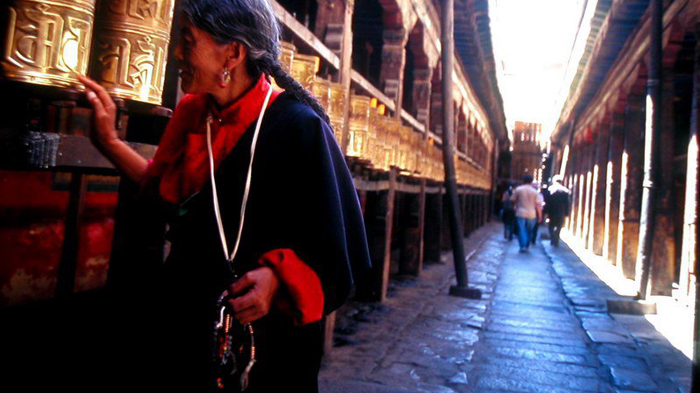 you will meet many sincere pilgrims doing kora in Nangkhor

During your visiting of Jokhang Temple, there are some advices for you to better enjoy your sightseeing:

· In the morning, from 08:00 to 11:30, it's open to religious people. From 11:30 to 17:30, it's open to tourists but some chapels will be closed in the afternoon.
· Walk clockwise from left to right in the hall after entering temple.
· No photos are allowed in the hall except you pay another 90 RMB for a permission card. No flashlight is allowed.
· In the afternoon after 3 pm, there will be monk debates in the second floor. You can go to watch if just in time.
· On the right side of the channel to main hall, there is a mural about the construction of Jokhang Temple. Never miss it if you want to learn more about the temple, the Lhasa city in 7th century as well as the story of Songtsen Gampo and Princess Wencheng.
· On the platform of the second floor, you can have a distant view of Potala Palace. This is an excellent spot for taking photos.
· Please dress respectfully in the temple. Do not wear hats or short skirts. If you are a family tour, please keep your kids quiet in the temple and do not horse around.