Traveling to Lhoka is unlike traveling anywhere else in Tibet, and this ancient cradle of civilization has the longest history in the region. With the increased development of tourism in the southern areas of Tibet, travel to this ancient land on the Tibetan plateau is turning into a popular activity for tourists to Tibet, with its natural landscapes, ancient palaces and monasteries, and its unique and historic cultural relics.

How to Travel Lhoka Prefecture, Tibet

If there is one color which matches Lhoka best, it must be yellow. Yellow is the color of earth and it is the birthplace for everything originally. In Tibetan Buddhism, yellow is the specific color for religion and it’s also a color symbolizing prosperity. Yellow is a color in which the Tibetans’ belief lies. Lhoka is the cradle of Tibetan nationality and it is in it the Tibetan culture grows. Lhoka feeds its people and breeds the Tibetan history. Now there are still signs of the life of the ancient princess, Princess Wencheng. The people in Lhoka still remember Princess Wencheng and tell their later generations that the crops are grown from the seeds brought by the princess and the salt and tea they use were also brought by the princess. Lhoka, with a long history, is somewhat indecorous yellow. Then, how to travel Lhoka? There are four ways to tour around the decorous Lhoka:

Way 1: Listen to the mountain spring with your beloved one

Itinerary: Tsedang - Yumbulakang
Attractions: When the sunshine throws its very first light onto the golden roof of Yumbulakang, the land below it is all in bright yellow. In the morning, walking on the steps leading to Yumbulakang thinking that those same steps were once stepped by Princess Wencheng, your imagination shall fly. It was said that 1300 years ago, Songtsen Gampo and Princess Wencheng had their wedding ceremony here and they had spent many summers here together. 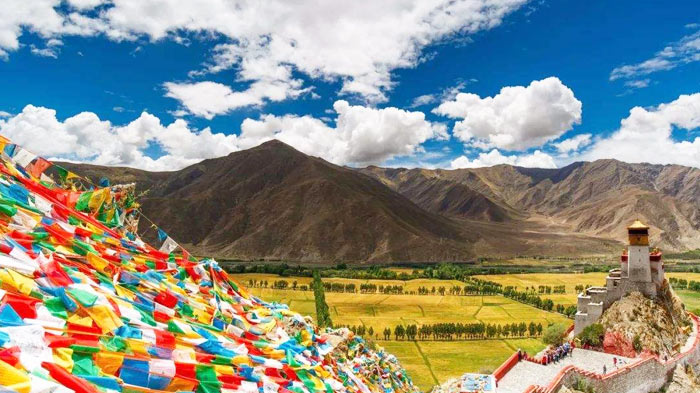 Yumbulakang Palace is the first palace in Tibet built for the first Tibetan King.

Yumbulakang had witnessed the beloved couple and their happy time here. Being in Yumbulakang, you may hear the mountain spring called “Ga Spring”. It is 400 meters away from Yumbulakang. The spring never goes dry and it is said that drinking the water of it shall make you healthy and go out of any illness. You can imagine that the Princess Wencheng dressed in yellow leaned close to Songtsen Gampo enjoying the morning sunshine while listening to the singing of the mountain spring. What a harmonious picture! Yumbulakang consists of two parts: watchtowers and palaces, and in the palaces there are the images of Songtsen Gampo, Princess Wencheng and some other people.

Itinerary: Tsedang - Chagza - Dragu Grassland
Attractions: Dragu Grassland is behind a mountain. On the grassland, there are lovely Himalayan blue sheep, Tibetan wild asses and the mirror-like Dragu Lake. Near the lake there is a place called Chagza and the local people has the habit of wearing the opposite side of Pulu (Pulu is a kind of woolen tweed cloth), which is also the unique characteristic of Chagza costumes (Chagza costumes have already been a kind of intangible cultural heritage successfully).

There are two stories about the origin of the clothing habit and both of them are connected with Princess Wencheng. One is said that Princess Wencheng loved the Chagza food so much, so she went to enjoy the food in Chagza and she was warmly welcomed by the local people. And during the party, her clothes were wet by the wine because there were so many people toasted to her. Then, she wore the pulu inside outside and just at that time, the king Songtsen Gampo came. Wencheng was so delighted and she rushed out to welcome her husband without changing her clothes. She was like a little happy bird and was pretty charming, and then the local women began to wear Pulu like Wencheng.

This is the happy one, and there is also a sad saying about this. It was said that Wencheng was very lonely and sad after Songtsen Gampo died. And she was somewhat insane because of the death of Songtsen Gampo, so she forgot how to dress Pulu and dressed the outside inside wandering in the grassland. Of course, now it’s hard to say which one was true. However, there is one thing for sure: Princess Wencheng did live in Lhoka alone for 30 years. And Dragu Grassland, no matter it’s prosperous yellow or bleak yellow, its desolation seems to be the reflection of the bleak destiny of the princess.

Way 3: Look for the signs of Wencheng in the Trandruk Monastery 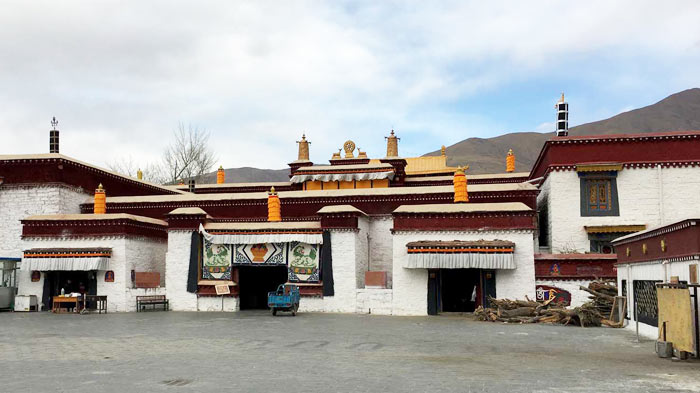 Trandruk Monastery is thought to be the first monastery in Tibet.

Itinerary: Tsedang - Qiongjie County - Tombs of Tibetan kings
Attractions: There is a piece of land with several mounds in Qiongjie County and it seems to be nothing special. But, in fact, they are the tombs of Tibetan kings. And Princess Wencheng was also buried here. This is so far the largest scale kings’ tombs in Tibet (since the Buddhism was brought to Tibet, there are rarely any burials in the ground). With the back being hills and the front being the Qiongjie River, the tombs of the Tibetan kings are almost being part of the hill. And there are nearly 9 tombs here facing to the southwest to show their religiosity towards Buddha.

How to Get to Lhoka Prefecture

Lying to the south of Lhasa, Lhoka Prefecture is best reached by car from the Tibetan capital. However, with a huge range of mountains lying to the south of the capital city, heading due south is impossible. Travel to the area needs to be along the roads that have been built to get to the famous Lhasa Gonggar International Airport, which lies in Gonggar County of Lhoka, with its well-used Airport Expressway. The easiest route is to take the Airport Expressway from Lhasa, which heads southwest until it meets the Yarlung Tsangpo Valley, where it turns due east to head for the famous airport. Much of this area of Tibet is not covered by many major road routes, and the main route into Lhoka follows the Yarlung Tsangbo River Valley heading east to Tsedang, the capital of Lhoka Prefecture.

From there, you can visit the famous sights of the Yumbulakang Palace and the Samye Monastery, and travel further east or south into the more remote areas of Lhoka. Alternatively, when you get to the Yarlung Tsangbo from Lhasa, you can travel west and southwest to explore the stunning Lake Yamdrok, Nagarze, and the beauty of the Puma Yumco Lake, to the south of Lake Yamdrok. - See more at Tsedang Transportation: how to travel easily in Tsedang and beyond

Lhoka has a very temperate climate, which is often dry through most of the year, and has an annual rainfall of only 450 millimeters per year. The warmer winds from the Indian Ocean combined with the Himalayas to the south, means that the weather in Lhoka is cool and comfortable, without being too hot in the summer months. Summer is the ideal time to visit Lhoka, with temperatures ranging from 9 degrees at night to only around 16 degrees in the daytime. Summer does see the rains of the monsoon season, but these are not usually heavy, and mostly fall in the late afternoon to evening. 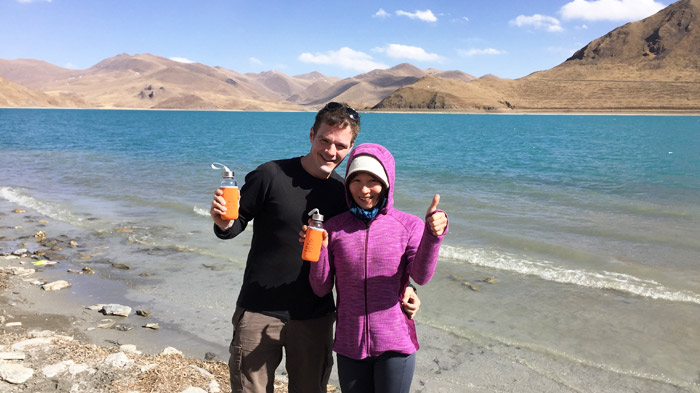 Summer is one of the best seasons to visit the stunning Yamdrok Lake in Shannan, Tibet.

While some parts of Tibet cannot be visited in winter, Lhoka is different, and has a milder winter climate, which means that you can get to most of the amazing sights of the prefecture throughout the winter. Temperatures drop to around -3 degrees in the winter months and can get as high as around 12 degrees in the daytime. The biggest challenge in the winter is the high winds, which whip across the plains and along the Yarlung Tsangpo River Valley.

Accommodation and Hotels in Lhoka, Tibet

While Lhoka is a large place to visit, most of the tourist hotels are in Tsedang, the administrative center of Lhoka. A still-growing tourist destination in Tibet, some of the hotels in Tsedang do not have the facilities and services of the large cities of Tibet, such as Lhasa and Shigatse. However, the accommodation standards are slowly expanding to meet the growing demand of tourism in the area, and 2, 3, and 4-star hotels are slowly appearing in the city, as well as having better facilities in the hostels and guesthouses, with the increase in transportation to the prefecture.

Outside the main center, which is an ideal location for visiting Yumbulakang, Samye, and Tradruk, the main accommodations are guesthouses with fairly basic facilities, and budget hostels.

What travel documents do I need for Shannan (Lhoka) tour?

As with all tours of Tibet, you will first need to be on a pre-arranged tour of the region, and have the ever-present Tibet Travel Permit. This is required for all travelers to Tibet, no matter where you are going, and is obtained by us on your behalf once you have booked your tour. The permit is applied by using a scanned copy of your passport and Chinese Entry Visa, and can take up to 20 days to process.

You will also need to have the Alien’s Travel Permit, which is required for travel to the “unopened” areas of Tibet, such as Mount Everest, Nyingchi, and Lhoka. The permit is applied in Lhasa, once you arrive, and requires your original passport and original Tibet Travel Permit to process the application. The permit will be applied for by our guide, and takes just an hour to process, while you are enjoying the sights of Lhasa and acclimatizing to the plateau altitude.

Lhoka is the heartland of ancient Tibet, and the cradle of Tibetan civilization and culture. With its historical attractions and unique culture, this amazing land in the south of the plateau is an awesome place to visit. With the increase in demand for tours into Lhoka, the tourism facilities in the area are improving, and tourists can expect to see better hotels and guesthouses to stay in. Weather-wise, Lhoka is an ideal destination at any time of the year, and even in the winter months, is not as cold as much of the northern and western areas of the plateau.