How to Plan Jokhang Temple Tour like an Expert

Worshiped by most of the pilgrims in Lhasa, Jokhang Temple boasts its reputation at home and abroad, for its unshakable spiritual position in Tibetan Buddhism and the breathtaking magnificence that never faded after centuries of time. More importantly, the life-size image of 12-year-old Jowa Sakyamuni which has increasingly become the most sacred Buddha among the pilgrims in Tibetan captures more and more visitors’ hearts, making this temple definitely a popular place to go.

Where is Jokhang Temple

Jokhang Temple is located in an old district which reveals the original appearance of Lhasa city, featuring with pure city life pattern and unique architectural style. Strolling on the road will definitely make visitors feel extremely calm and comfortable and provide them with tranquil and unsophisticated sceneries utterly different from the newly developed urban district which is not far from the Temple. 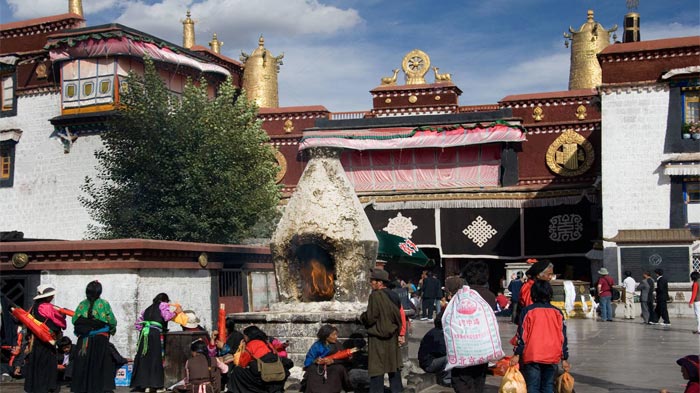 Entrance of the Jokhang Temple

How to Book the Ticket to Visit Jokhang Temple (Ticket: ￥85)

a) Purchase the ticket on site (recently available, if any change happens, we can book for you in advance)
b) Contact your guide operator to get the tickets. It is highly recommended to book couple of days in advance (during peak season, at least one week before you come to visit). Finding a nice travel agency can effectively help you solve the ticket-booking problem.
c) Buy the ticket on site (not recommended in peak season)
d) Opening hours of Jokhang Temple: 9:00-18:00
e) Recommended time for visit: 2h

Choice A: Jokhang Temple. Most travelers choose to visit the Temple first because things relating to the temple such as its history, development as well as its highlights will be introduced in the Temple and you have the chance to get the intuitive feelings about what you have seen. Some travelers say it’s much more interesting to take a stroll on Barkhor Street after worshiping the Jokhang Temple. 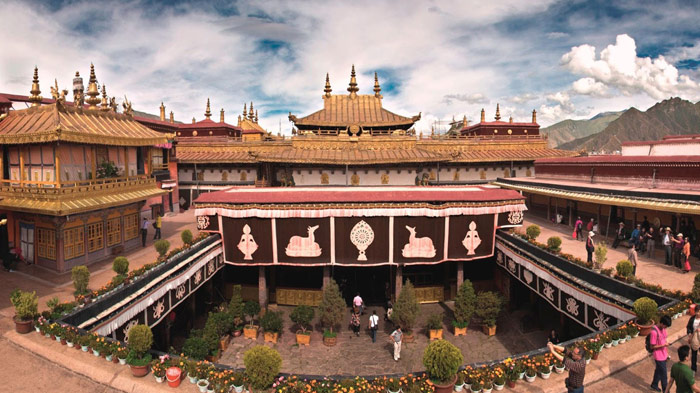 A glimpse of Jokhang Temple

Choice B: Strolling on the Barkhor Street first. Barkhor Street is located in the old district of the city. If you depart from the newly developed urban part, the visual impact on the sudden changed scenery which possesses the original and picturesque lifestyle of the Tibetan will definitely be another exciting experience.

How to Travel Like a Local inside Jokhang Temple?

As just mentioned, the Jokhang Temple is not as grand as other monasteries in Tibet, but a properly scheduled plan for interior sightseeing will indeed provide you a much better understanding of the Temple’s architecture features, hidden but heart-shaking stories as well as its expansion during these centuries.

a. What you can do before entering Jokhang Temple?

-- Appreciate the architectural features of the temple as a whole
When you arrives at the entrance, you may be deeply astonished by the bright and gilt roof of the temple and that’s the perfect time to appreciate its architectural features, the Tibetan Buddhist style with blended design elements from China, India vihara and Nepal as a whole. The exquisite Golden Wheel of Dharma and Deer sculpture on the roof provides a hint that the Temple is built mainly for pilgrim and Dharma propagation. Two incense burners in front of the entrance with butter lamps fiercely flicking inside will catch your attention and give you a hint that the holy flames have the power to drive all the darkness as well as demons in daily life or in your heart. 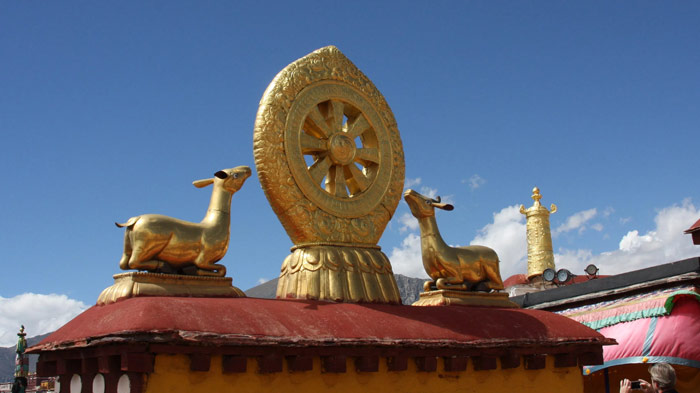 b. How you can travel inside Jokhang Temple?

-- Follow the recommended instruction below
The Jokhang, aligned along an axis, starts with an arch gate and follows by a two-storied Buddha Hall. Step into the entrance, you will find a mural surrounded path stretching to the courtyard with four “Guardian King” set two on each side along it. The murals are mainly about the ancient outlook of the Potala Palace and the builders working arduously to build the Jokhang Temple.

The courtyard of Jokhang Temple is mainly used to hold traditional Buddhist ceremonies presided by eminent abbots around the Tibet. In addition, visitors can get a full view of the Potala Palace by climbing up the stairs which are connecting the courtyard to the Golden Roof and get a new understanding of the holy Potala Palace by worshiping it from the Jokhang Temple.

When you have finished the sightseeing on the Roof, you are suggested to get down to the courtyard and move forward to the main hall which has long been deemed as the high-light of the temple. Go straight along the path, you eventually meet the eminent part, the Main Hall (with 4 floors). The Main Hall is tall, with an even larger paved courtyard. A corridor leads to the open courtyard, which is composed of two foursquare-shaped circles and two temples: one in the outer circle and the other in the inner circle.

The outer circle has a circular path, with a number of large prayer wheels. This circular path which sets the Jowa Sakyamuni as its center and is generally known as Nangkhor forms the first prayer wheel turning route (Kora Route) for Tibetan pilgrims while another three wheel-turning routes are centered on this one. The circular path leads to the main shrine and is surrounded by chapels. The image, brought by the king's Nepalese wife and initially kept at Ramoche, was moved to Jokhang and kept in the rear center of the inner temple. 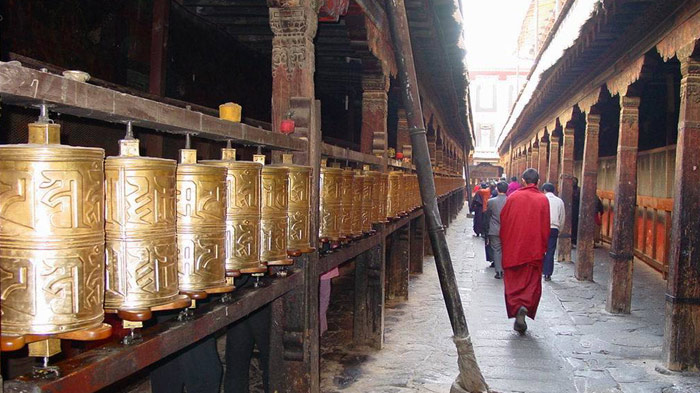 One path of Nangkhor in Jokhang

The most valuable and sacred Jowa Sakyamuni Buddha which serves as the most important relic of this temple and worshiped by millions of pious followers and visitors each year is shrined on the first floor in the Main Hall. Made of gilded bronze and 1.5 meters (4 ft 11 in) in height, Jowa Sakyamuni has long been guarded this Temple and Tibetans for almost 1300 years. Jowa Sakyamuni represented the Buddha when he was 12 years old as a prince. The appearance and the postures of a Buddha are revealed vividly here on him. Furthermore, the Buddha is dressed in its splendor with fabulous jewels and well-made clothes, sitting on a three-tiered lotus throne with his left hand on his lap and his right hand touching the earth.

The Jowo Sakayamuni is surrounded by many chapels, among which a little chapel is worth mentioning, for the Avalokiteshwara with a thousand eyes and a thousand arms is worshipped by a large number of believers here in Tibet. Flanking the main hall are halls for Amitabha (the Buddha of the past) and Qamba (the Buddha of the future). Incarnations of Sakyamuni are enshrined on either side of a central axis, and the Buddha's warrior guard is in the middle of the halls on the left side.

Besides the main hall and its adjoining halls, here lies dozens of chapels on both sides of the Buddha Hall. The Prince of Dharma chapel is housed in the interlayer chapel between the second and third floor while sculptures of Songtsen Gampo, Princess Wencheng, Princess Bhrikuti, Gar Tongtsan (the Tabo minister) and Thonmi Sambhota, the inventor of Tibetan script are worshipped on the second floor.

Barkhor Street, located in old district, reveals the original appearance of Lhasa, featuring with pristine architectural style and pure local customs. The circled Barkhor Street is actually a multi-side square path enclosing the Jokhang Temple and widely regarded as the second Kora Route for Tibetan pilgrims to turn the wheel (About 30 minutes to walk around). Strolling on the road will definitely make visitors feel calm and comfortable and provide them with unsophisticated sceneries utterly different from the newly developed urban district not far from the Jokhang. - See details on Lhasa Pilgrim Circuits 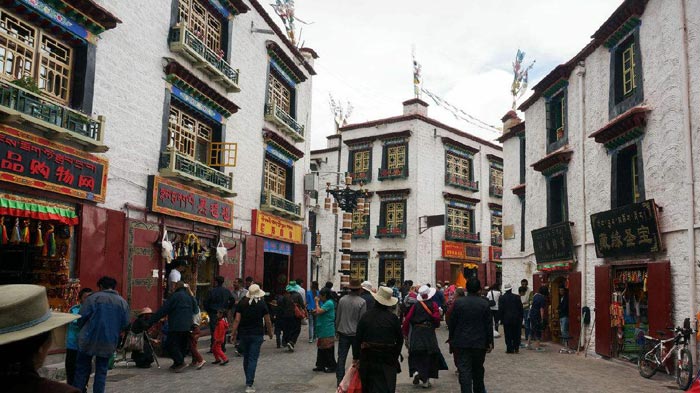 Prayer wheels, butter lamps, Thangkas, flags, Tibetan incense, Buddha heads are sold everywhere, besides, the Tibetan style house ornaments including the cushions, leather bags and handmade art-wares can also be found on Barkhor Street, providing a wide selection for you to choose as souvenirs. If you are obsessed with the Tibetan culture and attempt to know more, the sweet teahouse on the Barkhor Street can be another amazing place worth recommending.

As the most sacred temple in Tibet, Jokhang Temple has its own taboos. Travelers, from home and abroad, are required to follow the rules when visiting the interior part of the temple. Dress modestly and behave with good manner. Incinerating the incense is permitted but smoking inside is never to be allowed. Ask for permission if you plan to take photos with the monks or pilgrims inside the Temple.

When the Tibetan King Songtsen Gampo completed the unification of the Tibetan region during the Emperor of Tai Zong (627 A.D.-649A.D.), he presided the construction of the Jokhang Temple to marry his second wife who was generally known as Wen Cheng princess. Both of Songtsen Gampo’s wives brought a life-sized image of Buddha as dowries. One is an 8-year-old Buddha which is shined in Ramoche Monastery, while the other 12-year-old Buddha brought by Princess Wen Cheng is now worshiped in Jokhang Temple.