Every monastery in Tibet has its mysterious past and promising future while Ganden Monastery has no exception. The full name of it is Ganden Namgyal Ling with "Ganden" meaning "joyful" while "Namgyal Ling" the "victorious temple". Virtually, you can call this Monastery a lot of things but "joyful" is definitely the one that describes Ganden Monastery’s glorious past. Was the long-last prosperity an impulse action or the destined product of time? Just follow us to unveil the past and present of this sacred Ganden Monastery. 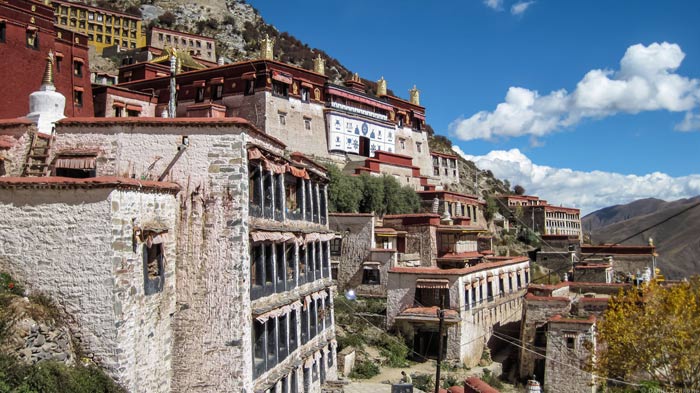 Things you need to know before touring the long process of Ganden Monastery's history.

1. Je Tsongkhapa Lozang-dragpa (1357–1419): son of a Tibetan Longben Tribal leader, father of Tibetan Buddhism Gelugpa, founder of the Ganden Monastery.
2. The foundation of Ganden Monastery in 1409 has marked the establishment of Gelugpa on the basis of religious reform held by Tsongkhapa in Tibet. Gelugpa finally had its fundamental Bodhimanda and gradually became dominated Buddhism sect in Tibet.
3. "Gelug", serving as the abbreviation for "Ganden Lug", means "Ganden tradition" in Tibet. And according to the tradition, Ganden Monastery should be presided by the Ganden Tripa (throne-holder of Ganden). So you can see how important the religious status of this monastery in Tibetan Buddhism Gelugpa.
4. Ganden Monastery adopts a three-level governing system which is Khangtsen, Dratsang, and Laji ranging from the bottom to the top respectively. Head of Laji is called Khenpo Tripa. The upper and lower courts are senior Tantra-studying organizations with their status paralleling to each other but higher than the Tantra Dratsang. Monks studying in both of the courts can be promoted step by step as the Khenpo and the heir of Ganden Tripa is eventually inherited by the nominators selected from them.

As one of the "great four" Gelug Monasteries in Tibet, Ganden Monastery is located 57 km away from Lhasa in Dagze county on the top of the Wangbur Mountain, with an altitude of approximately about 3,800 m. It was the first Gelugpa monastery that was built by Tsongkhapa himself in 1409 and the exact place for him to achieve Par nirvana. 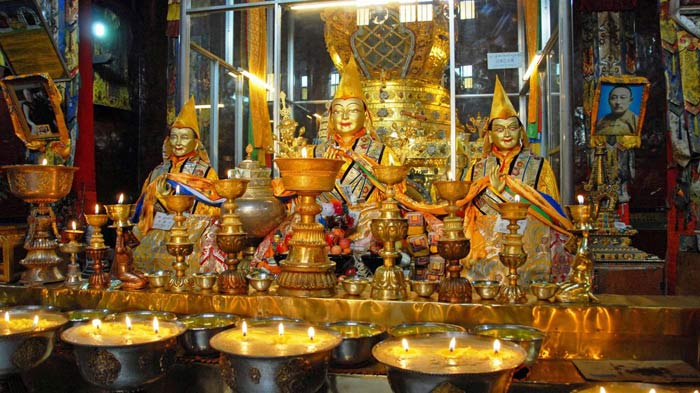 You may wonder why this Ganden Monastery differs from other Gelugpa monasteries in Tibet since you find no solemn walls, no gigantic and magnificent Buddha halls but the main Tsochin Hall located in the center with lots of medium-sized buildings and chapels flanking by. In fact, Ganden is not merely a monastery but the building complexes constructed and extended step by step in history with no compact feeling but the well-designed layout. The countless pillars, the white walls, the exquisite statues, murals as well as the glided roofs have marked and witnessed the development of this Monastery. It is mainly composed of the Tsochin Hall, Tri Thok Khang, Yangbajian Sutra Hall, Lima Temple, Two great Dratsangs.

The Tsochin Hall, the main hall of Ganden Monastery, has been the sacred place for Buddhist ritual holding and scripture chanting since its foundation in 1416. It was widely worshiped for the enshrining of the 32 dharmapalas including Damchen Chojey, Mahakala etc. Exploring deeper, you can find a giant gold and copper made Vajrabhairava surrounded by exquisite murals and girders with a buffalo head, 9 ferocious faces, 34 arms and 16 feet. Near the rear wall, there appears a gigantic stone which is reportedly from an Indian place called "Yangbajian". In history, this main Hall has been basically the same since the 4th Panchen Lama changed the roof for a gilded one. 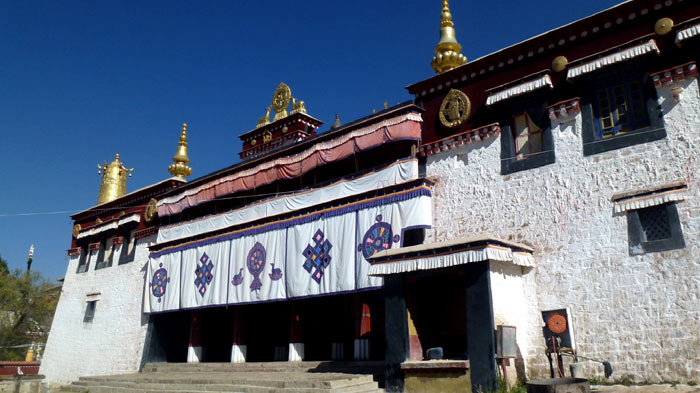 Insider tips:
1. Take a visit to Tri Thok Khang. It is a very holy place where Tsongkhapa lived and died and also a place where successive Ganden Tripas were taken as their living room. With the construction in 1409 and enlargement in 1720, Tri Thok Khang was eventually redecorated with the gilded roof during the 7th Dalai Period. In addition, lots of Tsongkhapa and successive Ganden Tripas' private things, cultural relics as well as handcrafts since the Ming Dynasty can also be explored in this house.
2. Don't miss Yangbajian Sutra Hall where Tsongkhapa's flesh remains were preserved. On October 25 1420, Tsongkhapa passed into Parinirvana in Tri Thok Khang, and his disciple Darmarinchen constructed this palace to preserve his flesh remains as well as the spirit. During the 10th Ganden Tripa, the spirit tower was recovered with gold all over instead of the original silver skin and precious pieces of jewelry. Till the 13th Dalai Lama, the whole palace was repaired to be much grander.
3. Pay a visit to Tsochin Hall to see the essence of the Monastery as well as its historical changes.

What was the Routine life of Ganden Monastery in hundreds of years?

Ganden Monastery has always been academic colleges through all the history, so naturally, the routine life of Ganden had most of the things to do with the daily studies and practices of Sutra and Tantra. During the second Ganden Tripa just after Tsongkhapa, the number of colleges in Ganden Monastery had increased to four, ranking the most colleges in Ganden history. It's not hard to imagine how strong the academic atmosphere during that period of time. Later, the colleges are combined into two – Jangtsey and Shartsey respectively and haven't been changed since after.

In today's school, students' abilities are judged by their test scores, so you may wonder how the monks' abilities were evaluated in Ganden Monastery. Well, similarly, their all-around abilities and scores were comprehensively judged by major examinations and formal public Buddhist scripture debating (The best place to experience a Buddhist scripture debating is the Sera Monastery monk debate held at the courtyard of Sera Monastery. each day from 15:00 to 17:00), which directly affected their successful graduation. So do not miss the Buddhist doctrine debating by Ganden monks at the debating courtyard. 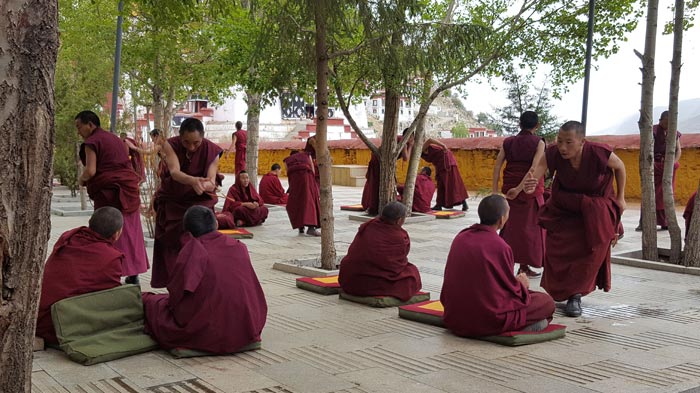 Insider tips:
1. Pay an on-the-spot visit to the debate yard to experience what it was like when hundreds of lamas doing public debating about different understandings of Tibetan Buddhist doctrines.
2. Explore the Shargtse Dratsang and the Jangtse Dratsang, the two biggest Dratsangs in Ganden Monastery with the total capacity of approximately 1500 monks chanting the Buddhist scriptures at the same time.

Why do we say Ganden Monastery functioned as a consultative organization in history?

In Ganden Monastery, countless rituals were held after its foundation. Nevertheless, we cannot skip the mentioning of the meeting presided by Shatra in the 1860s. The meeting is called "The great Ganden Monastery, Drepung Monastery, and the government official Meeting" with a much more formal name of "gandredrungche" or "Tsondu" in Tibetan. The purpose of this meeting was to dismiss the regent at that time and elect Shatra as the successive one. After the death of Shatra, Tsondu assumed the responsible role as the consultative organization in nominating the following regent.

What else can we experience from the present Ganden Monastery?

Ganden Monastery was once destroyed for two times in history, but constantly rebuilt and expanded to the size what it is now in the 21st century. Almost all the precious pieces of jewelry have been lost except Tsongkhapa's flesh remains. The newly built Ganden remains the original appearance of what it used to be, but the total scale fails to be comparable to the size in history. With Perfect restoration, when you walking in the newly built Monastery, you can also sense the joy and glories in the past days. The well-arranged architectures, the exquisite murals, the chanting sounds, the debating custom etc. do bring you back to the Ganden Monastery in the past.

Local Tibetans, as well as prayers from all over the world, worship the Monastery by doing the Ganden Kora. And gradually the widely chosen Kora around Ganden Monastery has become a very popular day trek with fantastic views over the valleys in Lhasa in the present days. 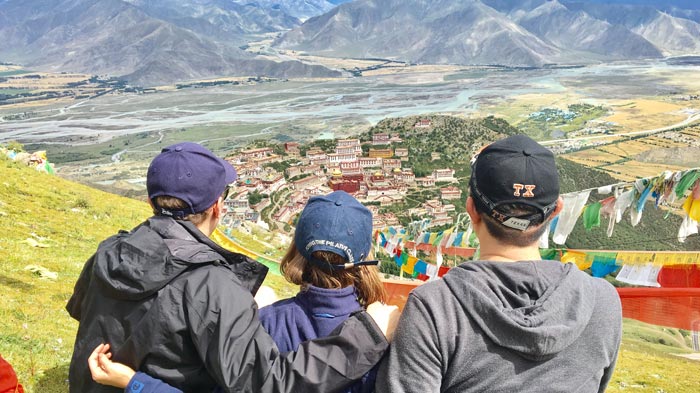 The panoramic view of the Ganden Monastery from the Wangbur Mountain

Insider tips:
Do the Ganden Kora and climb up the mountain to look down the Monastery complexes as a whole, the distant view enables you to get a more clear view of the complex scale and architectural style of the past Ganden Monastery. So why not take this day-trek (Refer to the site for other trekking tour in Tibet) into consideration if you plan a visit to the Monastery?

Follow us to meet the traditions in Ganden Monastery History

As one of the Tibetan Buddhist Gelugpa Monasteries, the status of Ganden in Gelugpa has never faded. So quite a lot of traditions are preserved in today's Ganden Monastery. During the Shoton Festival, Buddha unveiling ceremonies are also held in Ganden Monastery. Though is not as magnificent as the unveiling in Drepung Monastery, the Buddha unveiled in Ganden are much more exquisite and well made, which is worth visiting. 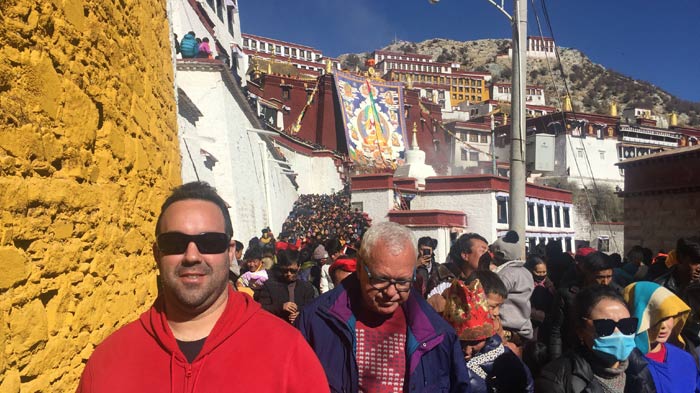 On October 25 of each year, also known as the death anniversary of Tsongkhapa, an extremely grand ceremony is due to be held to memorize the great founder of this Monastery by unveiling a gigantic Buddha with 26 meters in length and 10 meters in width in the Monastery, and when the night falls, all the lamps and lanterns in the Monastery are lightened up to extend the worships and appreciations. This traditional Lamp Festival is regarded as the most important festival in Ganden monastery, with its grandness sometimes over the Shodon festival. If you have the chance to visit Lhasa during this period, no not miss it.

0 Comment ON "Ganden Monastery History: stories and legends behind the mysterious Buddhist monastery"