The primary monastery of the Gelug School of Tibetan Buddhism, Ganden Monastery is also the first of the Gelug monasteries in Tibet, and is one of the Great Three Holy Monasteries of Tibet, along with Sera and Drepung. The monastery sits on the slopes just below the top of the Wangbori Mountain in the northeast of Dagzê County of Tibet, surrounded by the Nyenchen Tanglha Mountains that lie to the northeast of Lhasa. Sitting in a small natural depression on the mountainside, the monastery faces east in a semi-circle, the outer buildings constructed around the main halls of the monastery.

One of the best day-trips outside the Tibetan capital city of Lhasa, Ganden Monastery is one of the best single-day treks in the area, its kora route around the monastery being in two parts, a high kora and lower kora , both of which give you stunning views of the valley and surrounding mountains. As one of the best local treks to Lhasa, it is a great day out and can be an interesting experience for a novice high-altitude trekker.

Why Outdoor Enthusiasts Should Enjoy the Scenic Ganden Kora

The kora routes around Ganden Monastery offer some of the most beautiful scenic views in the area, as well as views of the surrounding mountains, with prayer flags strung along the various parts of the trail and littered with small scraps of prayer papers all across the hillside.

If you are a big fan of the great outdoors, this remote-seeming location is one of the best places to trek to get away from the crowds of people and masses of buildings that make up the Tibetan capital. This stark landscape is a patchwork of green and brown, with areas of tough hillside grass lying in the ranges of plateau rock formations and dusty ground. The trek takes you through both green and dusty areas, with shrubs and bushes clinging to the sides of the mountain, their roots digging in deep to get moisture in this dry dusty landscape.

Enjoy the stunning view of Lhasa Valley through Ganden Kora

How to Plan Ganden Kora

At an altitude of around 4,300 meters, Ganden Monastery is much higher than Lhasa, so it is a good idea to complete your acclimatization days in the city before attempting to travel outside Lhasa to walk along the ritual kora route. Normally, the first two days in Lhasa are reserved to allow travelers to acclimatize to the increased altitude, while touring the stunning sights of the world’s highest capital city. However, once you are acclimatized, a trip to Ganden Monastery for the kora trek is the perfect time to make the journey.

Ganden Monastery has two sections to its kora route, the high kora and low kora, and while both sections are stunning in terms of views and landscapes, it is easily possible to do both parts within the day, without hurrying. While it may be a little short for a day-long trek, the 90-minute drive out of Lhasa is worth it for the expansive views of the mountains and valley below. The low kora is the shorter part of the trek, and can be completed in around 45 minutes, to an hour, without rushing around the route. The low kora covers the part of the main kora route around the monastery on the lower side of the mountain, heading out from the front of the monastery and around the low-lying basin edge in which the monastery lies. 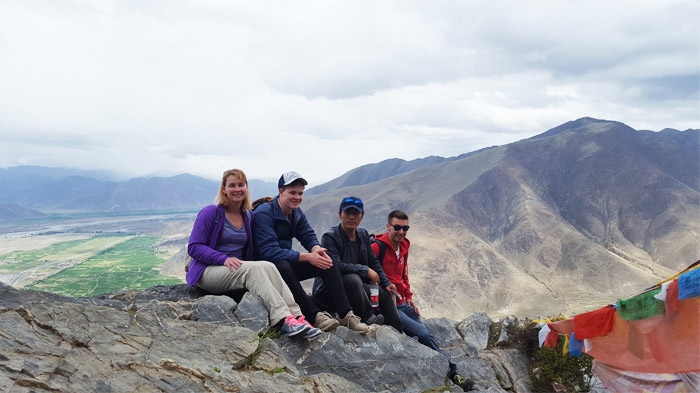 The high kora section is just what it says, high. After completing the low kora section, which is normally done first as you trek clockwise around a holy pilgrimage site such as this, you then start to climb up the sides of the mountain, and into the high-kora section. After around 40 minutes of climbing up a ridge you will reach the actual peak of the mountain, a popular place for pilgrims to burn juniper branches as a form of a Tibetan incense burning ritual. Many of the pilgrims that you can often see walking around the kora route also use this place as a site of offering, leaving offerings of tsampa, the roasted barley dish that is popular in Tibet, and which everyone on a pilgrimage travels with to eat.

After the peak, the trail descends around the monastery, returning you to the monastery along a ridge that runs down the west side of the mountain. Another part of the low kora splits off from the main route, taking you along a trail where there are many large rocks and mani stones, and eventually to the famous hermitage of Tsongkhapa , past a sky-burial site on the side of the mountain. While the site is not restricted, as many in Tibet are, you should respect the local traditions and not step onto the site itself, linger nearby, or attempt to take photos. Sky burial sites are sacred to Tibetan Buddhists, and to interfere in any way or to take photos is prohibited. However, it is a rare thing to even get this close to a sky burial site, so it makes the Ganden kora the most unique holy pilgrimage in Tibet.

How to Get Ganden Monastery from Lhasa 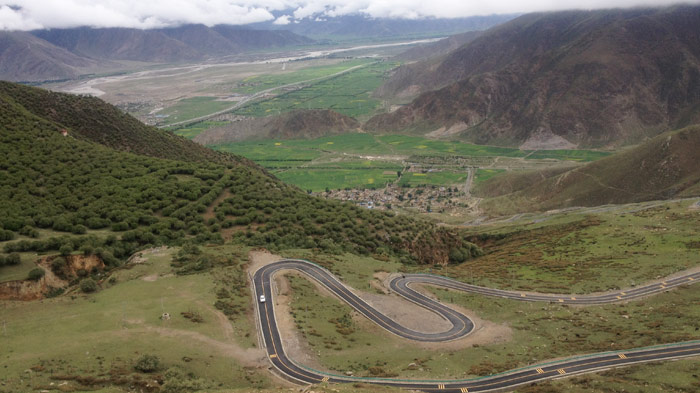 Following G318 National Highway, you'll get to Ganden Monastery from Lhasa within 2 hours.

Once out of Lhasa, the road to take is the G318 Highway running east, better known as the Sichuan Tibet Highway, which runs all the way through Nyingchi to Chengdu in Sichuan Province, more than 2,000 kilometers to the east. After crossing the Lhasa River, you turn east along the G318 for around 29 kilometers, after which you take the exit marked as the Deqing West Road, which doubles back on your route as far as the foot of the mountain, before heading south along the edge of the valley for a short distance. After heading through a small settlement to the west of Wangbori Mountain, the road turns southeast and starts its winding ascent to the monastery. After more than two dozen switchbacks and hairpin bends, the winding road finally reaches the monastery, lying in its natural depression in the hillside.

Ganden kora route is one of the few treks in the region that can be done at almost any time of year, as there is rarely any adverse weather in the area of Dagzê County. While it may be in the mountains to the east of Lhasa, there is rarely any snow, except in the very depths of winter, and that is the time when Tibet is closed to international travelers anyway.

Unless you are traveling to Tibet in the winter months from December to the end of January, then you are unlikely to need much in the way of warm clothing and layers to keep warm. The spring months in the area are not cold, and can be quite comfortable, with temperatures of around 10-15 degrees, while the autumn months are pretty much the same. It is also dry then, so a lot of waterproof clothing is not required. Ideally, trekking in spring and autumn can be done with a good pair of trekking pants, some lightweight tops, a good pair of strong hiking boots, and a warmer jacket for when it gets a little colder in the evening.

In the summer, it does not get very cold, except at night, and you are likely to be back in your hotel in Lhasa by then. However, a warm sweater or jacket would suffice, just in case the temperature drops a little. You will, however, need a waterproof jacket, as it can get a little wet in this area in the summer monsoon months, though many days in the summer do not have much rain. Even then, there is no guarantee that you will need the waterproofs, as it usually only rains in the afternoons and evenings, leaving the days bright and pleasant to trek.

From late November to the end of January, however, it can get a little colder than normal in the area, especially since you are on the high-altitude Tibetan plateau, and a little higher than in Lhasa. It is a good idea to bring along a couple of extra layers , in case the weather takes a turn for the colder, and some gloves and a warm hat, as the sun sets earlier in the winter than in the summer, and you may still be out after it starts to get dark and colder.

Whatever time of year you trek at Ganden, it is advisable to have plenty of sun cream, as the intense UV radiation from the sun can burn your skin, even in winter. Sunglasses are essential to prevent snow blindness, which can occur even with no snow in Tibet, and a hat to keep the sun off your head during the hot daytimes. Tibetan winds can be chill and biting, and while it is not as bad as at Mount Everest, the winds that whip along the valley around Ganden Monastery can leave lips chapped and skin chaffed, so lip balm and moisturizers are another essential item.

Trekking around the Ganden Monastery kora is one of the quintessential treks of Tibet, and possibly one of the most beautiful kora routes in the entire region. Being just a short drive from Lhasa, it is easy to get to and not as hard and arduous as many of the longer treks around the region, such as Kailash and EBC. And with it taking just a single day to do both sections of the kora and explore the hermitage of Tsongkhapa, it is a very worthwhile day-long excursion from the normal tours of Lhasa.