As one of the largest Tibetan monasteries, Drepung Monastery lies at the foot of the Gambo Utse Mountain, around five kilometers from downtown Lhasa, and is one of the Great Three Gelug Monasteries in Tibet, along with Sera and Ganden monasteries. From a distance, the monastery resembles a heap of rice, and the name actually means “collecting rice”.

Definitely, two thumbs up for exploring the rich heritage of Tibetan Buddhism! The largest and most important monastery in the Gelug School of Tibetan Buddhism, Drepung Monastery is Buddhist architecture on a grand scale, covering more than 250,000 square meters of ground. At the peak of Buddhism in ancient Tibet, this monastery held around 7,700 monks, the largest collection of Gelug monks, lamas, and initiates in Tibet. Spread out over the lower hillside of Mount Gambo Utse, the monastery can be seen from afar, its stunning white buildings standing out against the stark mountain landscape in which it lies. 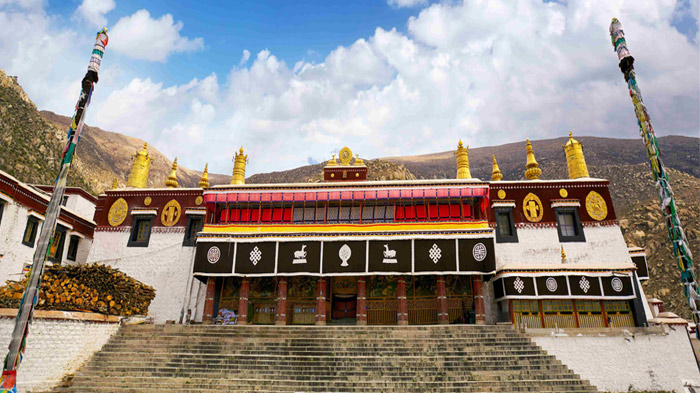 Drepung Monastery has long been known for its high academic standards, and has been one of the premier Buddhist universities in Lhasa for centuries, often referred to as the “Nalanda of Tibet”, a reference to one of the greatest Buddhist monastic universities in the world, in India. Divided into four separate colleges at the time, the monastery produced some of the finest Buddhist minds of the era for more than 400 years, with an organizational hierarchy that is extremely complex.

Drepung Monastery is unique in its layout and structure, built around the main caves and temples of Jamyang Choge, including the two white pagodas that stand out as magnificent in the midst of magnificence itself. The center of the entire layout, the pagodas are surrounded by the other halls and chapels in a mandala pattern, spreading out from the center of the universe.

Lying as it does on the foot of the mountain, Drepung Monastery covers a very wide area, with the most important halls and chapels in the middle, extending out through the Zhacangs and Kamcuns to the outer buildings which housed the monks and staff of the monastery. The central buildings consist of the Ganden Phodrang, the Coqen Hall, several Kamcuns, and the four main colleges, or Zhacangs, of which there were originally seven, which were incorporated into the four that still exist.

Known as the Ganden Palace, the Ganden Phodrang was the private residence of the Dalai Lamas, from the second to the fifth. Constructed according to the requirements of the second Dalai Lama, Gendun Gyaco, in around 1530, it served as the meeting place for the political and religious meetings of the local regime of the time. 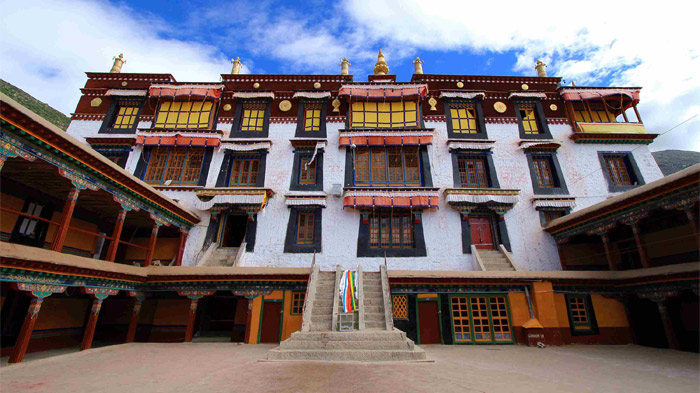 Ganden Palace - the former residence of the Dalai Lamas.

Located in the center of the monastery, fronted by one of the largest monastery squares in Tibet, the Coqen Hall, also known as the Tsokchen Lhakhang, is the main sutra hall of the monastery, with 183 stone pillars supporting the structure, which covers a massive 1,850 square meters. Filled with colorful decorations, which include fine statues of Buddha in great detail, the second story of the hall contains the massive collection of the various Buddhist sutras, which include a set of Gangyur Tripitaka, written in gold, and woodcarving sutras from the Qing Dynasty. 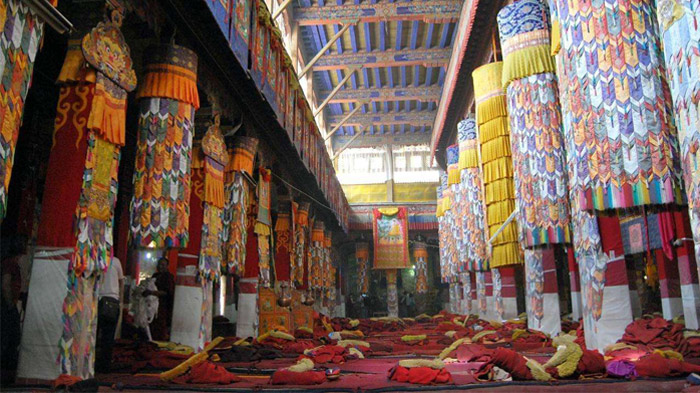 The third floor is the most unique of the hall, which contains a huge statue of the Qamba Buddha, which depicts the future Buddha, also known as the Maitreya, in his eighth year on earth. Worshipped by the monks and Buddhist disciples of the monastery, this statue of the future Buddha is believed to be around 500 years old, one of the oldest statues of Maitreya in Tibet.

Drepung Loseling Dratsang, the largest of Drepung’s colleges
The largest of the four colleges, Loseling Dratsang also covers the largest area, around 1,860 square meters, which includes a scripture hall and the Jambey Palace. The scripture hall, with its 102 pillars is lined along both sides with scripture shelves that are filled with ancient and modern versions of the sutras. The Jambey Palace has three rooms, which all contain various statues of Buddha at different times in his incarnation as Gautama Buddha. The Loseling college has the largest number of monks studying at the four colleges in Drepung, with students from 23 villages in Kham and Yunnan that come under the Loseling college’s jurisdiction.

Drepung Gomang Dratsang, the second to Loseling College
Second in size to the Loseling college, Gomang Dratsang also contains a sutra hall and Buddha palace, and is a smaller version of the Loseling in design, with its sutra hall also containing 102 pillars and two walls lined with scriptures. The Buddha Palace of Gomang is made up of three Zhacangs, the Jambay Lhakang, Minzhu Lhakhang, and Drolma Lhakhang, and it holds 16 villages in the Kham region under its jurisdiction, as well as some smaller locations.

Drepung Deyang Dratsang, the smallest college
The smallest of the four Zhacangs, Deyang has a much smaller hall and palace than the other three, but is renowned for its high quality of students and teachings, with almost all of its students excelling in their training. The scripture hall has a mere 62 pillars, but is lined with sutras along all four sides, with the Buddha Palace at the back of the hall.

Drepung Ngagpa Dratsang, the Tantra Institute of Drepung Monastery
The only college in Drepung for Tantric Buddhism, Ngagpa college lies to the back of the Tsokchen Lhakhang, with an enclosed courtyard in front that can only be accessed through the sutra hall. While the other three colleges practice the esoteric Dharma, the Ngagpa college practices its tantric rituals and teachings separately from the other three colleges, and the sutra hall is filled with painted murals of the tantric subjects. Tantric Buddhiam is a tradition that mainly focuses on the mystical practices and concepts as a different path to enlightenment.

One of the most important celebrations in the Drepung calendar, the Shoton Festival at the monastery is one of the largest in Tibet, and is held on the 15th day of the fifth month in the Tibetan lunisolar calendar, usually in August. Originally, the Tibetan Buddhist monks would go into meditation for 100 days, learning more on living in harmony with all other creatures, and fasting. For 100 days, they were not allowed to venture outside, preventing them from stepping on the smallest of creatures during the period, and when it was over, the people of the villages would provide them with milk curds as an offering. This has later turned into yogurt, and the Shoton is also known now as the Yogurt Festival. 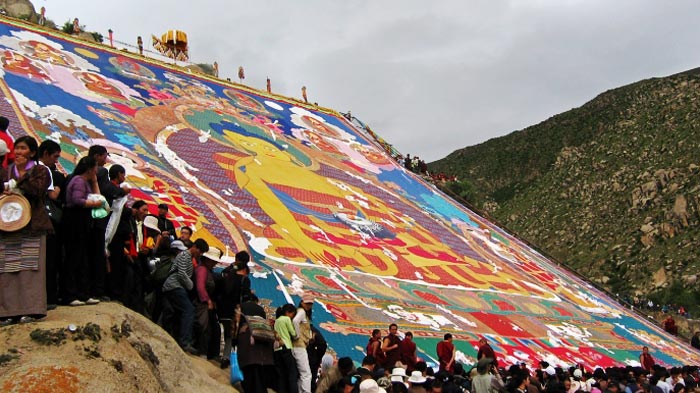 Nowadays, the festival also includes a thangka unfurling, when the lamas of the Drepung Monastery bring out a giant thangka painting and unfurl it onto a stand on the mountainside behind the monastery. Thousands of devout Buddhists gather for this unveiling ceremony, and as the smokes of the burning branches cover the hillside and the thangka is unveiled, they bend to its hem and pray, throwing white hada onto the thangka asking for blessings. For just two hours the thangka lies open, before being rolled up for another year and taken back into the monastery.

Like Sera, Drepung Monastery has a huge debating courtyard for the training of their monks in Buddhist semantic and philosophical debates. While the debates in Drepung may not be as famous as those of Sera Monastery, they are just as vibrant and active, with the monks making defined gestures as they debate the sutras and scriptures, the standing monks asking questions of their teachers, and defending their arguments with expansive gestures, clapping, and stamping. 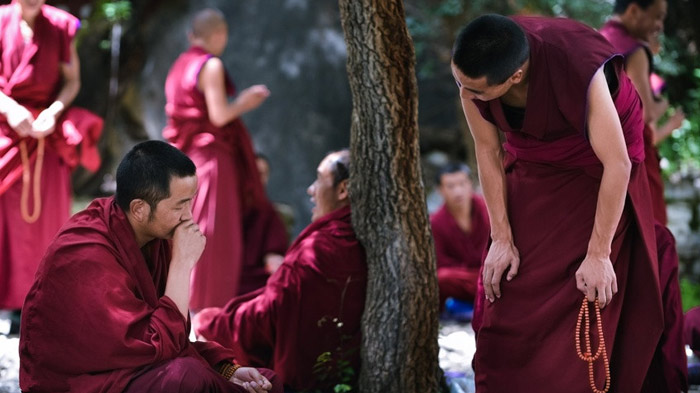 While it is not one of the most challenging of the koras in Tibet, the ritual kora route around Drepung Monastery is definitely one of the most stunning in terms of views. The Drepung Kora route does climb up to around 3,900 meters at its height, and should not be attempted until you have acclimatized properly, but is an ideal afternoon stroll for those that want to experience this beautiful route. 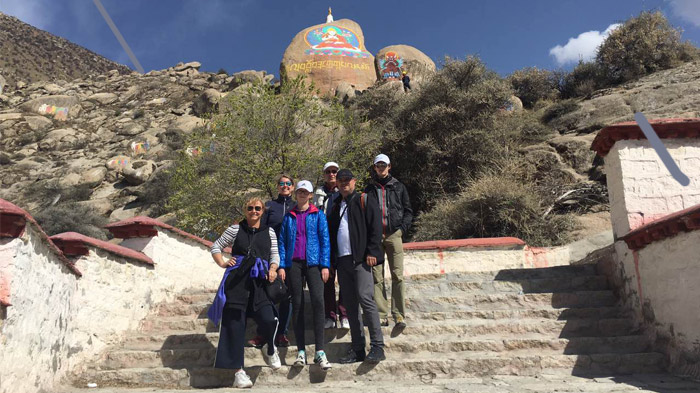 The path around the monastery passes several paintings on rocks at the side of the trail, and up past the wall where the thangka is hung during the Shoton Festival, to the peak at a small ridge valley filled with prayer flags of all kinds and many colors. Then it descends to the east, passing an encased statue and several carvings in the rocks around the site, before making it back to the main gates. The entire kora can be covered in around 20 minutes if you are doing it at a good trekking pace, but it is best to make it a leisurely stroll, as the views around the route are expansive and beautiful over the surrounding landscape.

Lying as it does on the outskirts of the Tibetan capital city, Drepung can be visited at any time of the year, and the kora route is open all year round too, making it an ideal day out for both summer and winter visitors. The shoulder months are usually the best times to visit, as the weather is mild and pleasant, without too many other tourists, while the summer months can be a little damp at times, and the monastery is usually a little crowded. In the winter, the monastery sometimes has a slight coating of snow in January and February, making it an even more impressive sight, and has fewer tourists crowding its courtyards and Zhacangs.

How to Get to Drepung Monastery

Getting there is relatively easy for most international tourists, as you are required to have your guide with you to enter all attractions in Tibet, even in Lhasa where you can explore without him. For international tourists that want to see the monastery outside or walk around it, or for local tourists traveling to Lhasa, you can get a No. 24 bus from Downtown Lhasa to the monastery, which costs around 3-4 yuan, or a taxi which costs around 20 yuan.

Drepung Monastery is the largest monastery in Tibet, and is a popular place to visit, but certain rules on decorum must be observed whilst inside the gompa. Reverence and respect for the monks and the artifacts should be observed, and photos should not be taken without permission. Some monasteries do allow photos, with permission and a small fee, though others do not permit it at all.

During the debating periods, which are held in four separate courtyards around the monastery, each linked to one of the four Dratsangs, visitors should remain quiet and observe only, without comments or interruptions. These debates are for the learning of the monks, and the ability to watch them is a privilege given by the monastery. Only take photos with permission of the monks and monastery lamas.

0 Comment ON "Drepung Monastery, the largest Tibetan monastery in Lhasa"