Lying at the foot of Mount Gambo Utse, Drepung Monastery sits in the foothills of the Nyenchen Tanglha Mountains, part of the Transhimalaya that run across the center of Tibet and into Sichuan Province. A rocky hillside behind, the monastery lies at an altitude of around 3,850 meters above sea level, while the peak of the mountain above it lies at more than 5,200 meters.

This stunning terrain is ideal for a trek along the Drepung kora route, which starts at the bottom of the monastery buildings and rises to elevations of around 3,900 meters at its highest point. The trek takes just an hour or two, as a casual stroll, and gives some excellent views of the Lhasa Valley to the south, the Lalu Wetlands to the east, and gives a great view overlooking the entire city of Lhasa. It is even possible to see the Potala Palace from the hillside above the monastery, the center of the triangle of monasteries that make up the Great Three University Monasteries of the Gelug School of Tibetan Buddhism.

What is Drepung Kora

The kora at Drepung Monastery is the ritual circumambulation route around the monastery for devout Buddhist pilgrims, as a way of reverence for the holy site. Working as both a type of meditation practice and a pilgrimage journey, it is done by a Buddhist as part of their ritual ceremony, in their search for enlightenment. The kora at Drepung is not one of the largest or most popular by any means, but is a holy ritual in its own right, as is every kora in Tibet. 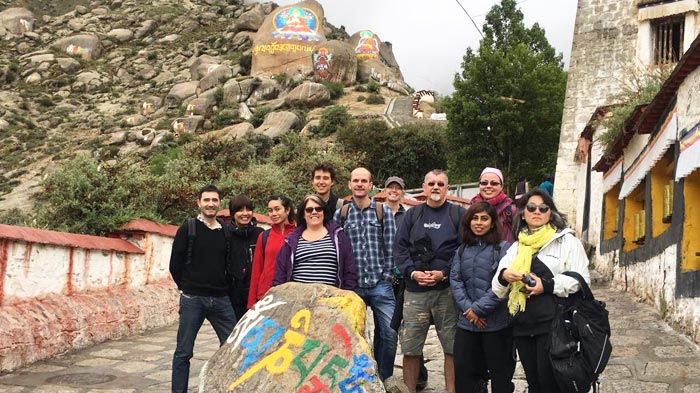 Our clients are getting ready for Drepung Kora, which starts from Ganden Palace.

Though the kora around Drepung Monastery is very attractive, it climbs up to around the height of 3,900m. It is suggested that a tourist should probably stay a few days to get used to the altitude before they go to the Drepung kora. It usually takes about an hour to walk there. At the turn-off to the Ganden Palace, you can find the path continuing uphill, passing several rock paintings, then going all the way up past a high wall, which was used to hang a giant thangka during the Shoton festival, finally it peaking at a valley of prayer flags from where it falling to the east through an encased Drolma statue and several more rock carvings. All the way you can enjoy the fantastic view.

Many pilgrims that walk the kora at Drepung can complete one circumambulation in around 20 to 30 minutes, though if you are trekking the route as a tourist, you can take your time and make it a nice gentle stroll, taking in the stunning landscape that surrounds you at the same time. Even then, it will only take you less than two hours to complete the circuit, and can be done as part of your visit to Drepung Monastery before lunch.

How to Plan Drepung Kora

The kora route for most tourists at Drepung starts from the main parking lot at the monastery, around a ten-minute walk up from the entrance, just before you get to the Ganden Palace. The path of the kora continues up the hill on the pilgrim trail that runs west past the compound, and heads towards the thangka platform on the hillside behind the northwestern corner of the monastery. A giant steel framework that stands eighty feet high and around 300 feet wide, the frame is the location where the giant Buddhist thangka painting is unfurled every year at the famous Shoton Festival at Drepung Monastery. If you are planning a trip to Tibet in August, you can time it to coincide with the Shoton Festival, and experience the unique ceremonies that go with it. - Check the detailed itinerary of 5 Days Shoton/Yogurt Banquet Festival Tour 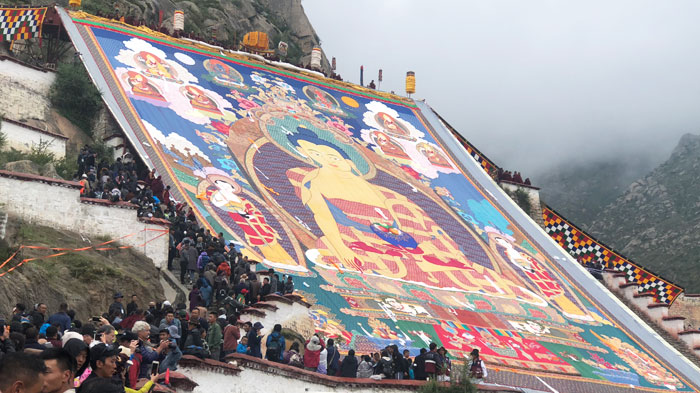 When Shoton Festival comes, the huge thangka will be unfurled at the exhibition platform in kora route.

The thangka frame is actually where the real kora route starts, in the woods just behind the platform, and the trail winds slowly up the side of the mountain behind the monastery, past dozens of colorfully painted rocks to the peak of the kora route. The view from the top of the kora is stunning, with amazing views of the Lhasa Valley to the south and the distant mountains of the Nyenchen Tanglha Range to the north.

From the peak, the trail winds slowly down the mountain’s western side, ending just to the side of the monastery itself, from where pilgrims doing multiple koras trek across the front of the monastery to the woods behind the thangka wall and start again. A walk that can be done in around an hour, it is one that is best done by taking your time, enjoying the beauty of the landscape and the surroundings, as well as the scenery and the small animals that gather for shade in the valley strewn with dozens of kilometer-long strings of prayer flags, one of the most captivating sights in Lhasa.

How to Avoid Altitude Sickness When Trekking Drepung Monastery

Ascending to more than 3,900 meters above sea level, the Drepung kora is not something to attempt as soon as you get to Tibet. Lying on the high-altitude Tibetan plateau, the highest plateau in the world, Lhasa lies at an altitude of around 3,656 meters, somewhat lower than Drepung’s kora peak, and on your arrival, you will need to rest and acclimatize before starting the kora trek, even one as short and leisurely as this.

Acclimatization is the key to seeing Tibet without feeling sick and dizzy all the time, and you can help the acclimatization process of your body by avoiding any strenuous activity until your body has adjusted to the thinner atmosphere. You should also avoid smoking, as well as alcohol and strong coffee, as both these can cause dehydration, which complicates the altitude sickness more. Staying hydrated in Tibet is important, and while out walking the kora later, you should carry plenty of water with you, to stay hydrated on the kora trail.

While making the trek around the monastery kora, it is also advisable to rest when you feel tired and strained, and not to try and complete it anyway, as this can increase any risk of altitude sickness hitting you again, despite you having already acclimatized. Care should always be taken when trekking to not over-exert oneself too much. - See how to How to Prevent Lhasa Altitude Sickness for the Newly-Arrived Tourists

What to Experience after Drepung Hiking

Once you are done with the ritual kora route, the site of the Drepung Monastery has many other delights with which to entice and amaze you, not the least being the unique Buddhist universities and their stunning monastic debates. Held in the late afternoons, around 3:00pm when the sun has dipped a little more towards the horizon, the debates are held between teacher and student, as each gives his question for an answer, and then defends the answer, in order to attempt to persuade to opposing debater to accept their side of the debate and concede. 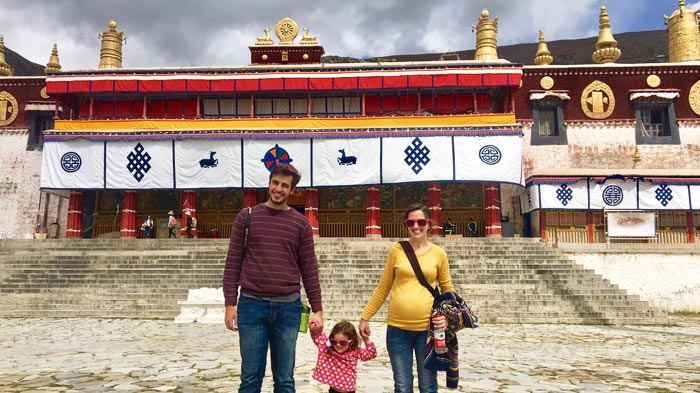 After Drepung kora, our clients and their lovely girl took a stroll around Coqen Hall of Drepung Monastery.

The monastery also has many other buildings that can be explored, from the stunning colleges themselves, known as Dratsangs, to the main hall of the monastery, known as the Coqen Hall or Tsokchen Lhakhang. Fronted by one of the largest monastery squares in Tibet, the hall is the main assembly hall of the monastery itself, while the four colleges have their own sutra halls and Buddha palaces. Filled with a huge variety of artworks, fine statues of Buddha, and thousands of Buddhist sutra scrolls, the third floor of the Coqen Hall is the most amazing, with its 500-year-old statue of the Qamba Buddha, also known as the Future or Maitreya Buddha.

If one monastery is not enough for you, then you can also visit the Nechung Monastery, on the slopes below the site of Drepung. A small temple that was once the seat of the famed “state oracle” of Tibet, the small gompa is decorated with some of the most striking murals you could imagine, including images of people hanging from the rafters by serpents, their skins flayed off, to figures of dancing monks with their eyes dangling from their disembodies skulls and plenty of other ghoulish pieces of work.

How to Get Drepung Monastery from Lhasa

Transportation is very convenient. You can take minibus 301, 302 and 303. All start from Beijing Donglu to the foot of the Drepung hill. Then you can take a coach which can take you up to the monastery. There are also direct minibuses. They usually start early in the morning in the place in front of Barkhor Square. Taxi is available, too. It usually costs 20 to 30 yuan to get there from Barkhor.

Being one of the Great Three Gelugpa Monasteries in Lhasa, Drepung Monastery is a must-visit site in Tibet for anyone with a liking for Buddhist architecture of the early Tibet and a love of the outdoors, set as it is in its own stunning valley. A trip out to the monastery not only includes the usual monastic sights of monks and Zhacangs, with white walls and golden roofs, but has the added advantage of being one of the few places where you can actually witness the monastic debates that the Gelug School is famous for. It is also a good trip to see how the ancient traditions of Tibetan Buddhism and government were followed, with the state oracle seat at Nechung being a strange revelation of the beliefs of the ancient people of Tibet, that a spirit could guide the living from heaven through a mortal man.

Despite the altitude, Drepung is normally visited on the second full day of a tour in Tibet, which is normally enough time to acclimatize enough to travel a little higher without any problems, especially since you descend again to sleep in Lhasa afterwards. Drepung and Sera together are one of the best days out in Lhasa, and give you the chance to experience Tibetan Buddhism in its true form, without any tourist-oriented gimmicks and guided tours.

About the Author - Tony Yin

My Name is Tony Yin, Sales Manager & Senior travel consultant for Tibet trip with over than 5 years working experience in Tibet tourism in our Tibet Vista company. Top sale in Tibet Vista for 5 years, too.Patient, Efficient, Warm Hearted, Considerate, Easy- going, Knowledgeable and always ready to offer help to someone in need. And of course, like making friends, too.