Qamdo Food and Restaurant: the best guide to dining in Chamdo

Located in the eastern area of the Tibetan plateau, Chamdo was once part of the ancient region of Tibet known as Kham. Translated as “the confluence of water”, the prefecture covers the southern area of the Hengduan Mountains and is an area of beautiful landscapes and unique ethnic Tibetan customs.

Chamdo is also one of the most fertile areas of Tibet, with a climate that is sub-alpine with a heavy monsoon season. The closeness of Chamdo to the province of Sichuan in Southwest China has had a major influence on the culture and cuisine of the area, and the majority of the cuisine is now largely Sichuan-influenced rather than traditional Tibetan. And so close to Yunnan and Qinghai, Chamdo also offers you kinds of mouthwatering Yunnan dishes and Qinghai food.

What to Eat in Qamdo, Tibet

While the cuisine is a mix of Tibetan and Sichuan styles, there are plenty of authentic Tibetan dishes in Chamdo, and many of the local Tibetan population still depend on their traditional foods, such as tsampa, butter tea, and yak meat. One of the popular dishes you can find in Chamdo is the amazing Gyagya noodle dish, from the small town of Yanjing in Markam County of Chamdo. Gyagya actually means “to order more as soon as one finishes”, and the noodle dish is popular as the waiter will keep adding more noodles to your bowl until you tell him you have eaten enough. The dish has a special flavor that comes from the unique broth made using a meat processing method brought from western Yunnan Province centuries ago. 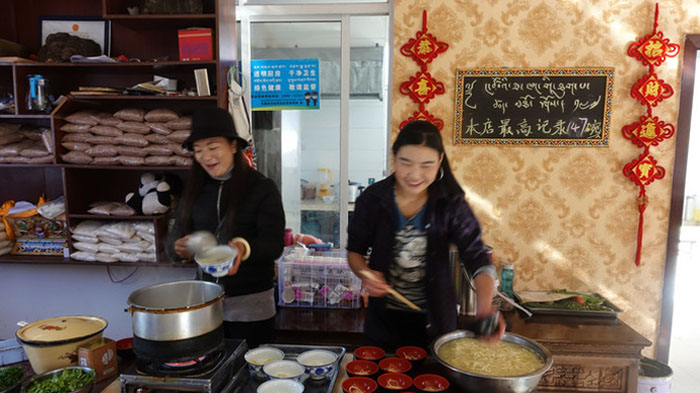 Tibetan locals are making Yanjing Gyagya Noodle for our clients.

Blood sausage, similar in form and texture to the western “black pudding”, is another popular dish in Chamdo, though it does often have a little Sichuan twist to it here, with the addition of a few spices to beef it up a little. The sausages are long and thick, and made using fresh blood, which is boiled down and reduced to a stiff paste using tsampa flour and beef fat is added. The paste is then extruded into a long sausage skin and tied off every few centimeters to make short sausages. It is then boiled further or fried when ready to be eaten. A delicious dish often served just on its own, families will cook a large plate of blood sausages, slice them, and sit around the table eating them on their own.

As well as the other usual traditional Tibetan dishes eaten across Chamdo, the ancient form of air-dried yak meat is a very popular dish in the area. All Tibetans are fond of eating meat, and in some areas of the plateau, such as Chamdo, the yak meat is dried at the end of the year, to preserve it and allow it to be eaten many weeks later, without it going off. The practice began thousands of years ago, and air-dried yak meat is peculiar only to Tibet. The meat is cut into long thin strips and hung out in the open air in the colder part of the year when temperatures are below freezing. The meat dries naturally in the cold dry air, and by the end of winter is ready to eat. The flavor is unusual and distinctive, and is well worth trying if you visit Chamdo, where it is a very popular food.

Chamdo is located next to the western side of Sichuan Province in Southwest China, and has had a huge influence from the traditional Sichuan cuisine, making many of the local dishes very spicy and flavorful. Renowned for its bold flavors and spiciness, a result of the use of the imported Sichuan pepper, Sichuan Cuisine is mostly eaten in the eastern areas of Chamdo, closer to the boundary with Sichuan Province, though many of the restaurants across the prefecture now provide a range of both Tibetan and Sichuan dishes. 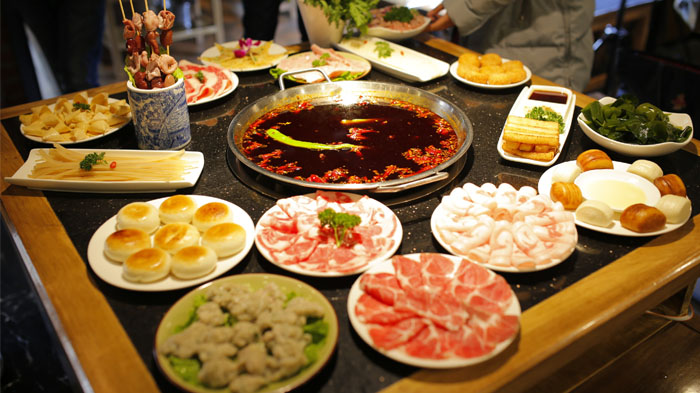 Sichuan Hotpot is very popular among locals in Kham region.

Sichuan food in Chamdo is mainly based on the meat dishes from Sichuan cuisine, and often contains meat such as beef and mutton in place of the popular use of pork and chicken found in Sichuan itself. Chamdo Sichuan cuisine also uses large amounts of the famous Sichuan Pepper, which has an intense citrus-like flavor. Popular Sichuan dishes in Chamdo include kung pao beef tendons, Sichuan hotpot, hot noodle soup, and Dandan noodles.

While not having as much of an influence on the foods in Chamdo Yunnan cuisine - also known as Dian cuisine - can be found in many places in the south of the prefecture. An exotic flavor, Dian cuisine is a mixture of the Han cuisine with the many ethnic cultures of Yunnan, and can be quite spicy, with heavy use of the local mushrooms. A hugely varied style of cooking, Dian cuisine is hard to classify with one singular taste, though it does have heavy use of spices, mushrooms feature prominently in the dishes, and such things as algae, ferns, flowers, and even insects can be found in the wide variety of dishes. Banana flowers, pineapple rice, adzuki beans, and mix in noodles are all popular Dian dishes found in southern Chamdo. 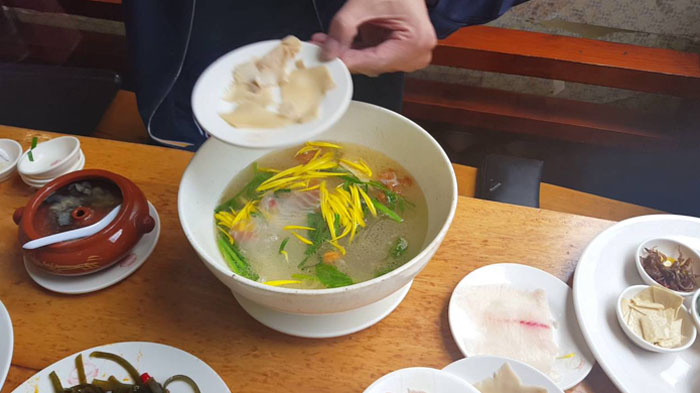 Featuring a blend of Tibetan and Muslim influences that add to the unique character of Qinghai cuisine, this unique style of cooking is all about simplicity and sustenance. Northern Chamdo lies close to the southern Qinghai border, and the influence of the Tibetan, Han, and Hui foods have come to dominate the cuisine found in northern Chamdo. However, since the main dishes in southern Qinghai heavily feature the use of yak meat, highland barley, and yak butter, there is little different from many of the traditional Tibetan dishes. 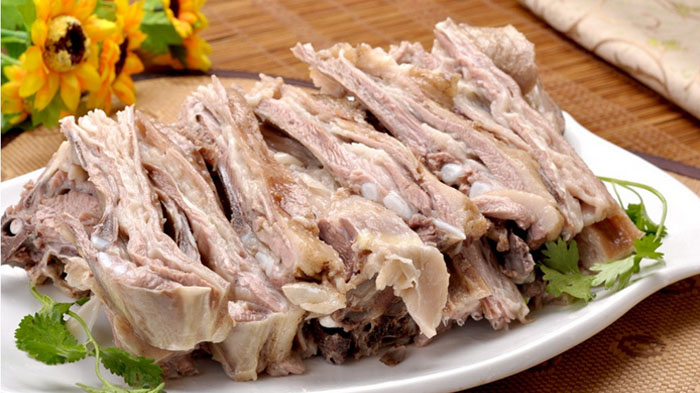 Grabbing mutton is the most popular Qinghai dish in Chamdo Prefecture.

Dumplings are more in the Hui Muslim style, and are plump and stuffed with delicious fillings, while mutton is widely used in many dishes, with “grabbing mutton” being a popular local food. Made from well-stewed joints of mutton, the meat literally falls off the bones, making it easy to separate and eat when you “grab” some from the local street vendors. Blood sausage is also a popular dish, though the more popular sausage is the white sausage, made the same way but without the blood.

Where to Dine in Chamdo, Tibet

The Healthy Chestnut Chicken in the Karub District of Qamdo serves some of the best Sichuan chicken dishes in the area, and for those with a taste for Lulang Chicken stone-pot soups, there are few better places to eat it. For the best in beef and yak meat dishes, you can try the new Yi Pin Xian Ecological Beef House on Qiongbu Road in Dengqen County, which has a wide variety of delicious Tibetan and Sichuan beef dishes, and has some of the best-air-dried yak meat in the area.

With such a wide variety of dishes and cuisines available in Chamdo, there is always going to be somewhere to get a different dish from the traditional Tibetan cuisine for those that are not fond of Tibetan foods. From the delights of the spicy Sichuan dishes that can be found all across Chamdo and the variety of Qinghai dishes that are popular in the north of the prefecture to the unique mushroom-based dishes of Yunnan found in the south of Chamdo, few places in Tibet have such a huge range of food styles. The influence of the Chinese cuisines on Chamdo cuisine has made this a very unique place to eat, and to learn more about how the variety of different dishes has made Chamdo a food-lover’s paradise.

0 Comment ON "Qamdo Food and Restaurant: the best guide to dining in Chamdo"