Renowned for being the longest lake in Asia, stretching more than 134 kilometers (83 miles) across Tibet, Ladakh, and Jammu and Kashmir, Pangong Tso is known locally in Tibet as the “high grassland lake” and sits at an average altitude of around 4,350 meters above sea level. The lake is unusual on the plateau region as it is one of the few saline lakes in the world that actually freeze in winter. However, not all of this unique lake is filled with saltwater, and while the western end of the lake is saline, the eastern end is composed of freshwater.

The eastern end of this long linear lake lies in the middle of Rutog County in Ngari Prefecture, in the far northwest of Tibet Autonomous Region. Known for its calmness, clearness and unending expandability, the beauty of Pangong Tso Lake cannot be described but can only be experienced. Camping at Pangong Tso in western Tibet is the best way to experience its charm.

What to See in Pangong Tso Camping Adventure

It is a delight to your eyes and pure like a morning dew. The stillness, calmness, and beauty of this amazingly unique lake is so overwhelming that it will leave you mesmerized. Migratory birds add a special feel to the whole experience, and reaching the lake itself is an experience to remember.

Most tourists to Tibet only do a day trip to the lake, but spending at least one day here is highly recommended so that you can watch the myriad colors of the lake at different times of the day. The sunset & the sunrise are the best time to witness the sheer beauty of this place. At the high altitude of this beautiful lake, the waters change color depending on the weather and the seasons, ranging from perfectly transparent in some of the shallower parts to a deep azure-blue out in the center of the lake, with a myriad of aquamarines, turquoises, and rich blues in between. 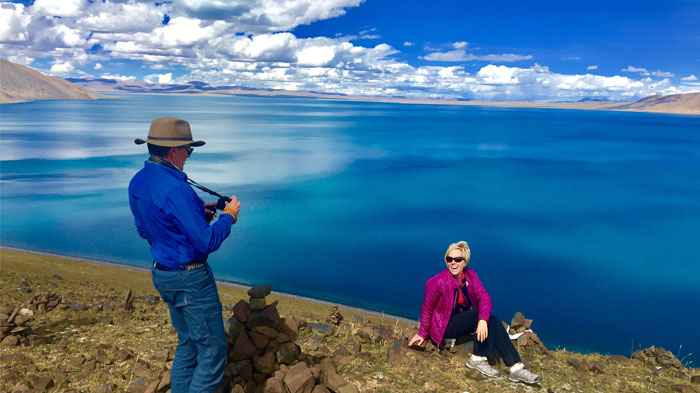 Capturing the beauty of Pangong Tso Lake on a sunning afternoon.

Get a closer look at Pangong Lake fish

The western end of Pangong Tso has no live fish in its salty waters, but on the Tibetan side, the fresh waters of the lake are home to three species of fish, which are found in large quantities in these still, sweet waters. The most prolific of these species are the “Schizopygopsis stoliczkai”, also known as the False Osman, which is found across Asia from central China to Afghanistan, and the Kunar Snowtrout, a ray-finned fish that is found throughout India, Nepal, Pakistan, and Tibet. The lake is also home to an unusual species of schizothoracin known as the Crack-Bellied Fish. A sub-species of the carp, this unique fish is endemic to this lake alone, and has evolved to survive in the harsh conditions on the high-altitude Tibetan plateau.

Sunrise and sunset over the lake also produce a multitude of reflected colors on the surface, sparkling in the early morning sunshine as the sun rises over the plateau or shimmering in the dusky evenings as it sets over Ladakh. For those that want to catch these stunning sights in the morning and evening together, you will need to stay at the local campsite of the lake to make the most of your visit. This adds another advantage to the trip to the lake that most people do not realize. Lying in the farthest western area of the Tibetan plateau, in the deep shadows of the mighty Himalayas, Pangong Tso sits in one of the darkest places on the planet at night. With no visible lights from towns and cities for hundreds of miles, there is no light pollution around the lake, making it one of the best places on the plateau to visit for the stunning view of the stars and galaxies that it provides. This spectacular location is also one of the few places on the face of the planet from where you can get a good view of the rest of the Milky Way, our own Galaxy. 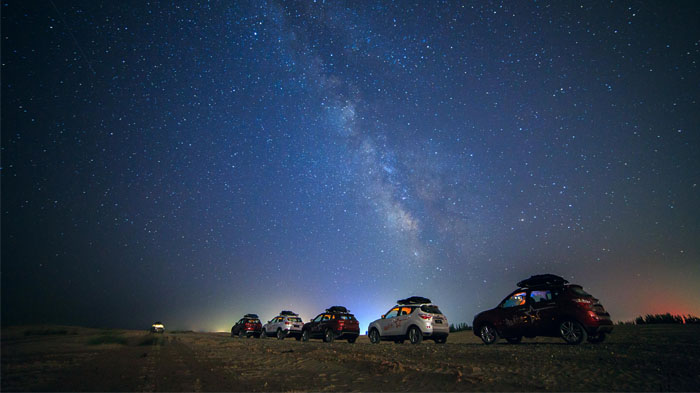 Explore other flora and fauna at Pangong Tso Lake

While the eastern part of the lake is sweet freshwater, there is little that grows around the shores, and you can see only sparse vegetation surrounding the lake. However, in stark contrast, the western end of the lake, where the saline waters prevail, is surrounded by lush undergrowth and numerous trees, bushes, and verdant meadows.

Around the lake, on the Tibetan end, it is often common to see one of Tibet’s most popular animals grazing on the sparse vegetation and running across the rolling landscape. The Kiang, the Tibetan wild ass, is a popular resident at the lake in Rutog County, and can be seen frequently running in herds. However, you will be lucky if you see the other popular local resident, the Himalayan marmot. A small relative of the American woodchuck, this cute and cuddly-looking creature is around the size of a domestic cat, and lives in the sparse alpine grasslands around the lake and throughout Ngari itself.

Pangong Tso is a paradise for migrant birds. The bird island at Pangong Tso Lake is renowned as being the highest in the world, and the entire lake is well known for being one of the largest areas of natural wetlands on the planet. It is an islet covering an area of 60,000 square meters, and there are no big trees on the islet, just short bushes. However, you can see numerous ducks and gulls over and on the lake surface and there are some species of scrub and perennial herbs that grow in the marshes around the lake that make good cover for these migratory wildfowl. The lake acts as an important breeding ground for a wide variety of birds throughout the year, including a number of migratory birds. During summer, the Bar-headed goose and Brahmini ducks are commonly seen here, as well as having a year-round population of brown-headed gulls, among more than 20 other species of indigenous birds. This is also one of the summer breeding grounds for the rare Black-Necked crane, the migratory bird that can be found across the plateau. 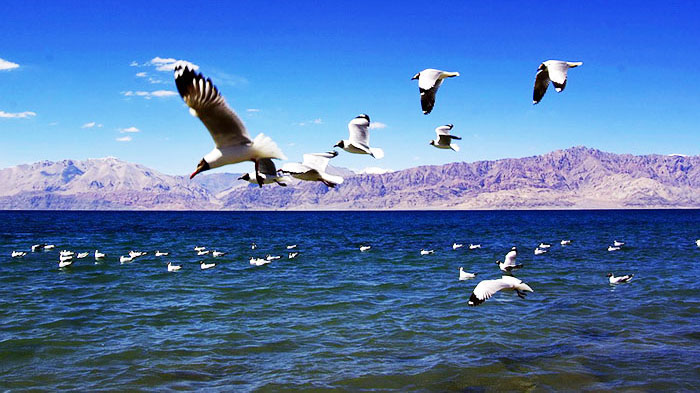 What to Eat in Pangong Tso Lake Camping

This far into the northwest of Tibet, restaurants are few and far between, but they are not non-existent. The best place to eat is at the Pangong Tso Resort on the shores of the lake, which offers some delicious venison, wild yak meat, and plenty of traditional Tibetan cuisine. However, if you are not into Tibetan food, then it is a good idea to bring your own from Lhasa when you travel, so you can cook food that you like at the campsite.

Pangong Tso is only accessible for a limited period of time from May to September. The campsite is also operational from May to September, though if you come early in the season in May, it can still be quite cold. September also is quite cold here, so proper clothing is advised to enjoy the outdoors. For the rest of the season, the weather is fine and pleasantly warm, though not at all hot at any time of the year, even in the height of summer. Average daily temperatures range from 4 to 8 degrees in May and September to as high as 13 degrees in July, the hottest time of year. Summer may be the monsoon period in Tibet, but here in Ngari, there is very little in the way of rain, even in the wettest months of the year. At its peak, the monsoon only produces around 11-15mm of rain in a month, so it will not affect your stay at Pangong Tso. - See more at Ngari weather and temperature.

How to Get to Pangong Tso, Ngari

There are two roads from Lhasa to Ngari, the southern road (1,190km) and the northern road (1,760km). The route you choose to get here is entirely up to you, and each has its own spectacular sights to admire on the long journey. The southern route is the most popular, as it takes you from Lhasa through Shigatse and Saga, pasty Mount Kailash and Lake Manasarovar, and through Ngari City itself to get here. See more details at 15 days Kailash Manasarovar small group tour.

What to Pack for Camping at Pangong Tso

If you are planning on camping at Pangong Tso, then you will need to bring the required clothing for a relatively chilly part of Tibet. The weather is changeable at high elevations such as this, and you can find that a relatively warm day can soon turn cold with some biting winds. A good suggested clothing list for a trip like this would be:
● Strong hiking boots (even if you are not trekking as the terrain is rough and rocky around most of the area)
● Waterproof pants and windproof outer pants
● Wind and waterproof jackets, as light as possible
● Good woolen socks and warm underwear
● Thermal shirt and pants for colder weather
● Several layers of medium thickness t-shirts
● Fleece or down jacket
● Warm gloves, preferably Gore-Tex
● A good warm hat or beanie
● Sunglasses for eye protection
● Medium Backpack
● Torch or headlamp
● First aid kit
● Quick-drying alpine towels
● Water bottles

Water-proof and wind-proof tents can be provided by us at your request, and we do recommend that you include an arctic-rated sleeping bag and mattress for the camping, as the ground can be cold at night.

How to Avoid Altitude Sickness in Pangong Tso Camp

While this is not the highest altitude in Tibet, few people stay for more than a few hours at higher locations than this, and there is still a chance that you can feel some of the symptoms of altitude sickness if you are not well prepared. Before leaving Lhasa, you should spend a couple of days acclimatizing to the higher altitude, and whilst on the journey to Pangong Tso, it is advisable to stop for a day or so to acclimatize again to the increased altitude of Ngari.

A trip to Pangong Tso in northern Ngari Prefecture in the far west of Tibet is one of the most exciting journeys you can take on this high-altitude isolated plateau. An epic and immense journey that few people take in a year, this is one adventure you should not miss. The stunning landscape and beautiful lakeside scenery, even if it is a little sparse, is well worth the time spent in getting here, and you will never forget or regret making this explorer’s adventure with us to the longest lake in Asia. Joining our Kailash tour and visiting Pangong Tso and nearby attractions altogether!

0 Comment ON "Pangong Tso Camping: how to visit Pangong Lake in western Tibet"