Agriculture and Climate in Tibet

Tibet, an autonomous region of China, is known as the “roof of the world”, and rightly so. Set between the Himalayan mountain range to the south and the Taklamakan Desert to the north, the Qinghai-Tibet plateau is the highest natural plateau the planet has ever seen. The plateau stretches for around 1,000 km from north to south and 2,500 km east to west, giving it a total area of around 2.5 million square kilometers. Covering parts of Nepal, Kashmir, and China as well, the plateau sits at an average elevation of over 4,500 meters above sea level, and is the location of Mt. Everest, the world’s highest mountain. It is also the location of Dolma-la, the world’s highest pass, which is situated to the north of the holy Mt. Kailash, in Ngari Prefecture in the southeast. The pass, which forms part of the holy kora, or trek, around the mountain, sits at an elevation of 5,630 meters, and is the highest point of the trek.

The plateau is a high-altitude steppe, with an arid landscape interspersed with mountains and lakes. To the south and east the steppe gives way to grasslands that can support the nomadic herdsmen, despite the frost that covers the area for half of the year. As you move north and northwest the plateau gets progressively higher until it reaches the Changthang region in the far northwest. Here the average elevation is around 5,000 meters, and the temperature can drop to as low as -40°C in winter. 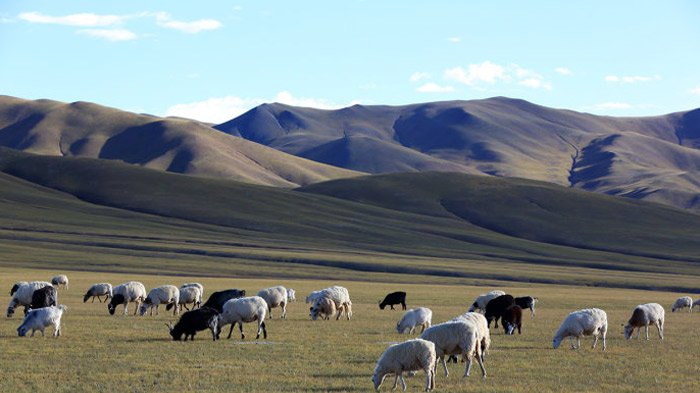 Central and other parts of Tibet

The central area, around Lhasa, is more normal for an area that is still some 3,500 meters above sea level, and is good for tourists in the period from April to October. The temperatures range greatly from area to area, with an average temperature in Lhasa of 22°C-24°C. There is also very little rain in the region, even in the monsoon season. Annually, most of the rain falls in the period from July to August, although the average in most parts of Tibet is very low. 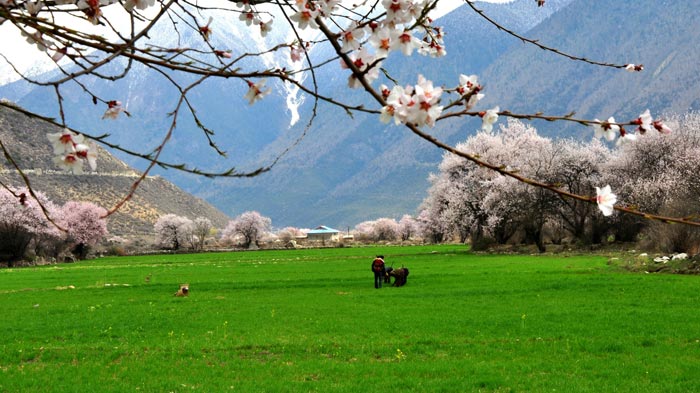 Southeastern Tibet has a gentler and more temperate climate than the rest of the region, with average temperatures of around 8°C. To the far west the average is below zero and the climate is more inhospitable.

The Tibetan economy is mainly one of subsistence agriculture. With a very limited amount of arable land from crops, the main type of farming on the plateau is livestock, primarily yaks, sheep, and goats. These farmers are nomadic, and they manage their grazing using a mix of tradition, knowledge and environmental understanding. The nomadic farmers move their herds to different pastures depending on the season, which allows the pastures to recover and retain their fertility. With almost 75% of the TAR being pasture land, there is a natural wealth of animals from the lower pastures in the east to the high steppes of the west. 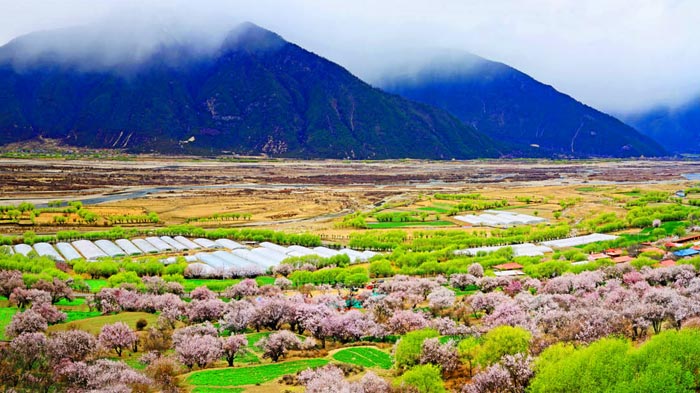 The croplands of the eastern areas are at very high altitudes in comparison to the rest of the world. Although the arable farmlands only account for 2% of the region’s total area, they supply the essential grains for the population, in extreme altitudes and weather conditions. The farmers use a system of sustainability that is appropriate to this fragile environment. Crop rotation, mixing crops and fallow periods help to maintain good croplands in an area with a limited growing season. Although the main crop for the region for the last 3,600 years is barley - which is used to make the staple food, tsampa - other major crops have since been introduced, including rice, maize, millet, wheat and rapeseed. The main vegetables consist of cabbage, turnip, radish, potato, peas, beans and tomatoes, although these are expensive to ship to the remote western regions.

Crops in the region are planted normally in April following cultivation of the arable lands. The planting season starts with a traditional festival known as Nyatro. The farmers dress the yaks they will use for ploughing, and a celebratory meal is held on the land they will cultivate. On the following day the ploughing starts, then the barley and wheat is planted. As a community, the farmers have a system of working together to cover everyone’s land, and get it ready for planting. The land is tilled using yak-drawn ploughs, and then hoed by hand to loosen the soil and remove large stones dug up by the plough. 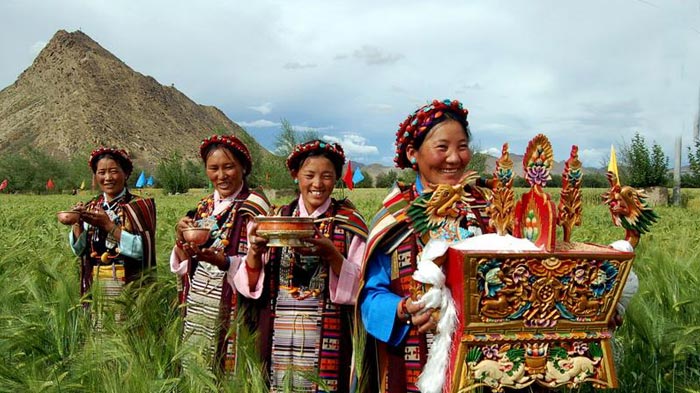 Very few places in Tibet have irrigation systems, so they wait for the rains in mid-June for the crops to grow faster. Another festival is held at this time, known as Ongkor. The festival holds a small ritual kora around the farm for a better harvest. Crop ripening takes around 6 weeks after the rains have come, and the harvest starts from mid-August and runs into September. Harvesting is done manually, with groups of farmers working each others fields to make sure all the crops are gathered quickly. Harvest is done by hand, with short sickles to cut the stems. Any wheat and barley destined for long-term storage is bundled into sheaves and stored until needed.

In Lhasa, there are open-air markets that sell the produce of the local farmers. The bazaar-like areas in Lhasa’s old town, around Barkhor Street, have a wide selection of imported nuts and dried fruits as well as tsampa,made from roasted barley, a dried yak cheese known as churpi and yak butter, etc. Locally made dried meats are popular with tourists, and you can also find many spices that have been imported from India. Originally established during the Qing Dynasty, the Tromsikhang market has over 300 years of history, and it sells hundreds of different local and imported products.

Something of interest to the visitors to the city would be the natural local crafts that are sold there. From hand made beads, to carved turquiose, beeswax and red corals, the sellers offer them to visitors that they think will buy them.

A visit to the farmers market - or one of the local farms around Lhasa if you have time - is an experience not to be forgotten. The traditional culture of the farmers and the selling of their produce is something not seen in many parts of the world anymore.