Where Should You Have Your Wedding Photos Taken in Tibet?

Wedding is the most special occasion in an individual’s life. It not only concerns the bonding of two individuals’ lives, but is an aspect of showing the class and taste also. Therefore majority of people want their weddings to be massive, special and unique. The pre-wedding photo shoot, wedding photo shoot, and post-wedding photo shoot have gained tremendous importance in the course of time. The more unique the photo shoots are, more triumphant that couple is. 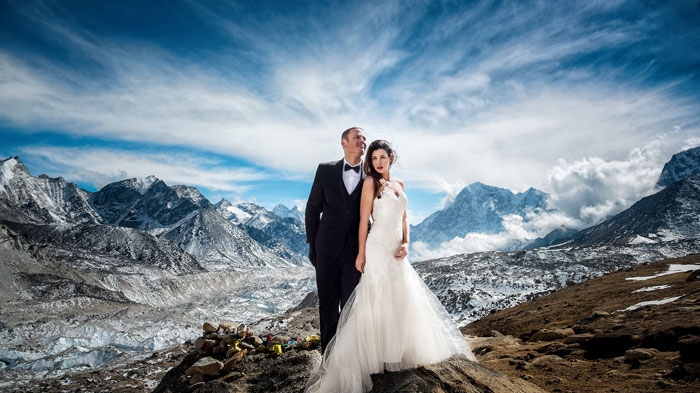 Likewise Tibet has ranked high amongst the most unique and remarkable places to do a wedding photo shoot. The high altitude of the place makes the atmosphere a bit colder than usual. But who cares the temperature when the enigmatic Tibet, the land of enigmatic beauty features in your wedding photo shoot?

The first view that anyone will get in Tibet is the view of the snow-capped mountains, surrounding it. These huge peaks, with their white caps are almost like the menacing body-guards of Tibet, adding to its charming beauty. In some regions the snowy Alpine ranges are juxtaposed by the lush green carpet and colorful flowers. The greenery soft and rich, increases the decorum of any type of picture. A wedding photo against this backdrop will be massive success no doubt.

In other regions, the greenery might be absent owing to the low temperature. Instead, you will find a clear blue lake or river, placed against the brown alpine range, with the sky providing a natural hue of blue. The rich color blend, in this case also, is enough to increase the sparkle of any photo shoot. In the regions like Lhasa, Shigatse and Ngari, the high altitude might pose to be problematic, especially for people prone towards altitude sickness. But pictures in these areas turn out to be heavenly. There is no need of any high quality digital cameras. Even the normal cameras prove effective, as the beauty of the newly-wed couple is enhanced doubly by the scenic beauty of these regions. 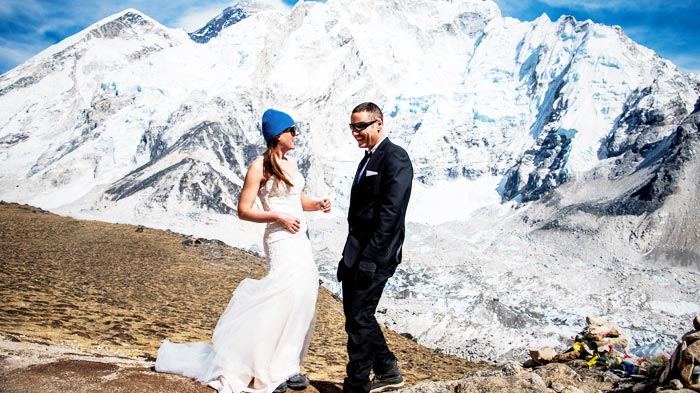 In Lhasa, the air is very clear and moisture free. As a result the sunlight that reaches is tremendously bright and sparkling. However, the daytime pictures are better in quality than the night ones. The shroud of moss near the mountain peaks, provide an altogether different in the picture. Nyingchi and Chamdo, which are situated at a lower altitude than the other regions, the mountains can be the chief presence in the photography. However, the carpet of green soft grass, stretching unlimitedly, with colorful wildflowers, draws the main attraction.

With a clear climate, the nature’s bountiful beauty acquires an altogether different essence. Other than these Mount Makalu or Mount Namcha Barwa are just the epitomes of perfect beauty. Especially during sunset, or sunrise, if the moment of the lovely newly-wed couple can be captured, with the golden peaks of these mountains behind, the essence, class and uniqueness of the picture will reach to its peak.

Unique Climate of Tibet for Photography

The climate of Tibet is considered to be its only negative aspect. However there is a great deal of diverse perceptions regarding its climate. While some people find it to be extremely soothing, while others think it to be too harsh. Nonetheless the climate of Tibet is indeed harsh in winters. Therefore photo shoots in winter is not recommended.

In Lhasa the temperature, the temperature can range up to 29 degree centigrade, whereas in winter it can drop down to -16 degree centigrade. Thus in Tibet, the temperatures in the months of April to early October remain favorable. In winter it becomes very low and at some places, the road even becomes menacing and dangerous due to snowfall. Therefore the recommended season for wedding photo shoot is the months from April to early October. However it must be noted that the month of July in Tibet experiences heavy rainfall. Therefore any plan of photo shoot might get disrupted during this month.

Tibet is the land which follows the religion of Buddhism. It is because of this reason that innumerable monasteries can be found in Tibet. The famous monasteries mainly are the schools of Gelugpa Buddhism, advocated by the Tibetan philosopher Tsongkhapa. The Gelugpa monasteries like the Ganden Monastery, the Sera Monastery, the Drepung Monastery, the Ta’er Monastery are the chief attractions in Tibet. 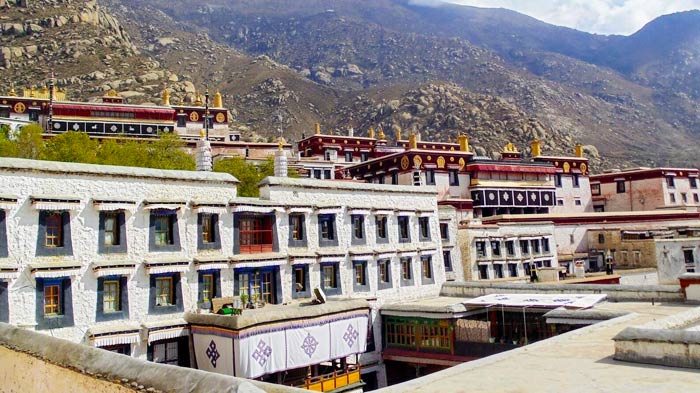 Various festivals occur in Tibet in these monasteries like the Tibetan New Year, the Shoton festival, the Ganden Thangka festival and many others. The couple can even get their wedding photo shoot customized in these monasteries, during these festivals. Thus, Buddhism too proves to be an important aspect, if the wedding photography is scheduled to be taken in Tibet. The festivals usually occur from the months of April to June. Only the Tibetan New Year takes place in December. However for all of these, special permissions must be taken. If required documents might be needed to be produced too, according to the rules and regulations of the different monasteries.

This grand and the spectacular palace, is the most popular area for wedding photography. Situated on the Red Hill of central Lhasa, Potala Palace is the landmark of Tibet. It constitutes a big area, and different regions, serve differently in a wedding photography. The architecture of the palace is grand and complex. There are two chief regions- the Red Palace and the White Palace. 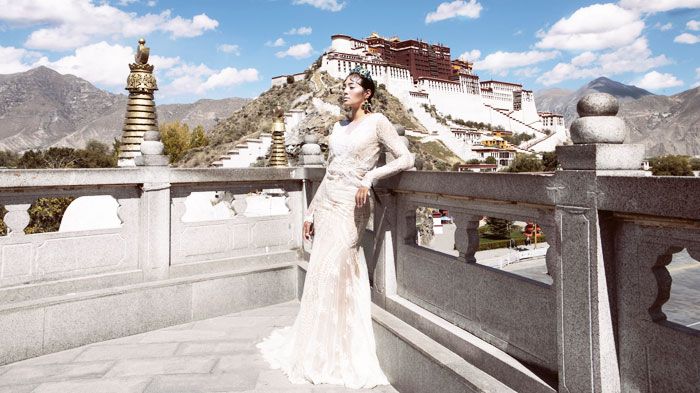 There is no particular season to visit this palace. However, the high altitude is the reason that many people avoid it during the winter season. Therefore the best seasons are from May to November. There are several angles from which the wedding photography could be clicked. They are

Chakpori Hill - It's located at the southwest of Potala Palace. The best picture can be clicked during sunrise and sunset.

Palubuk Monastery - Palubuk Monastery is situated on the southwestern part of the palace. It is a type of temple built on the rock. The best view can be obtained during the afternoon with the white palace in its background.

Potala Palace Square - In its grand area, the best view can be obtained at night. This is because at night a glowing fountain show takes place. Therefore the wedding pictures can be customized accordingly.

Dragon Lake Park - located in the northern part of Potala Palace, Dragon Lake Park can be used to have a dramatic wedding photo shoot. With the reflection of the palace in the water, it is indeed a very unique photography.

In Potala Palace, due to high demands, the tickets are not always available. Therefore it is recommended to pre-book the tickets, prior to a month to get a smooth access. 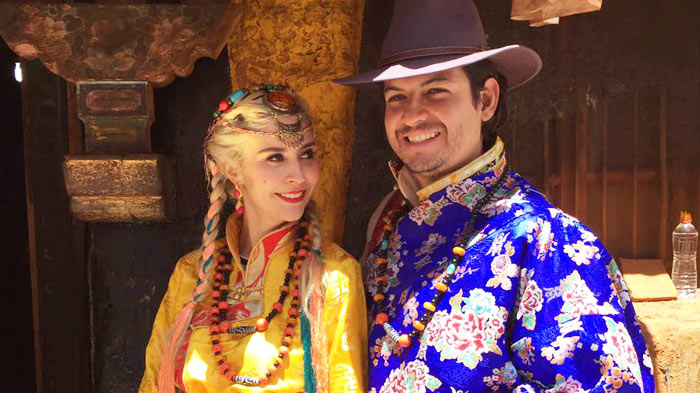 The Yamdrok Lake, remarkable for its turquoise blue water, is situated at 110km southwest of Lhasa. Being at a very high altitude, the climate is very cold, compared to other regions. The air is very clean and the sunshine is sparklingly clear. The meaning of Yamdrok, ‘upper pasture’, is well defined by the green carpets of pastures spreading infinitely and the herbivores grazing. Thus the green pasture, the blue lake and the white fluffy clouds with visible mountain peaks will be the riot of colors in a single picture. 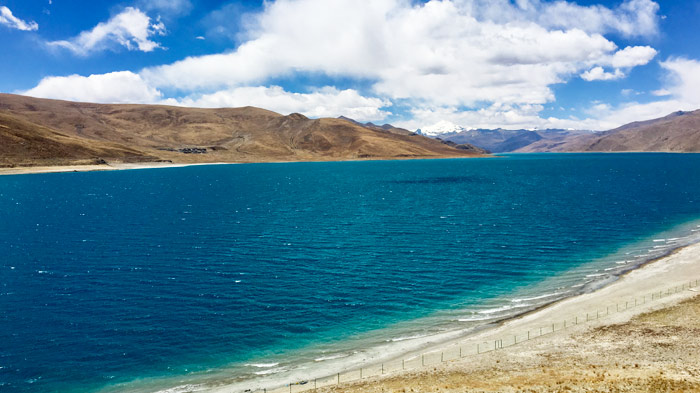 The best months to take picture are from July to September as the summers are faced by rain and in winter the lake freezes. The sunrise and sunset are the ideal times to add a golden hue to the beautifully customized wedding photography. The surrounding mountain ranges are also spectacularly beautiful to be featured in a photo. Against the blue and the green background, any light colored wedding gown or wedding dress matches well. Also the place is the abode of mountain animals and innumerable birds. The arrangement of accommodation and food can be made by a detailed online survey or through the local officials and tour guides.

The Namtso Lake is a very famous place for wedding photography, despite its high altitude. The meaning of the name is ‘heavenly lake’. Indeed the scenic beauty of the place, with the lake within it is no less than a heavenly sight. The Namtso Lake is situated at an elevation of 4750m. Therefore the weather is very cold. However nothing can lessen the interest among the couples do a photoshoot there. 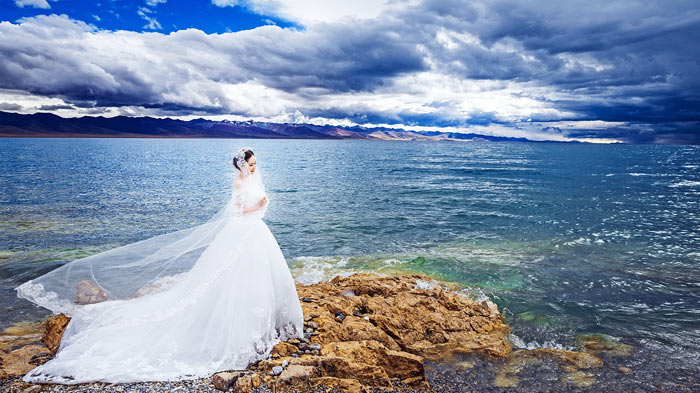 It is the largest saltwater lake in Tibet. The color of the water is deep blue. Being at such a high altitude, the air is very clean and the sun shines brighter. The skies are often shrouded with fluffy white clouds and there is always a thin layer of mist prevailing. The ranges around the lake, with a snow-capped peak, increase the beauty of the place. Though no greenery can be traced, the lake with the clear sky and the mountain peaks are enough to increase the essence of the photograph.

The best seasons to visit Namtso Lake and take photography are the summer and autumn months. Therefore from May to September, the peak season continues. The best time to take the shot is 30minutes before and after sunrise or sunset when the peaks are clad in heavenly hues of colors. Climbing up to Tashi peninsula provides a more mesmerizing view of the lake. Perfect synchronization of colours of clothes will absolutely make the wedding photography spectacular.

Draksum Tso is one of the most famous tourist spot in Tibet. It is mainly known for its cherubic beauty and the scenic grandeur. Also this place is considered holy by the local people. There is an alpine lake and the region is characterized by the presence of a small island, shaped like the back of the pig. 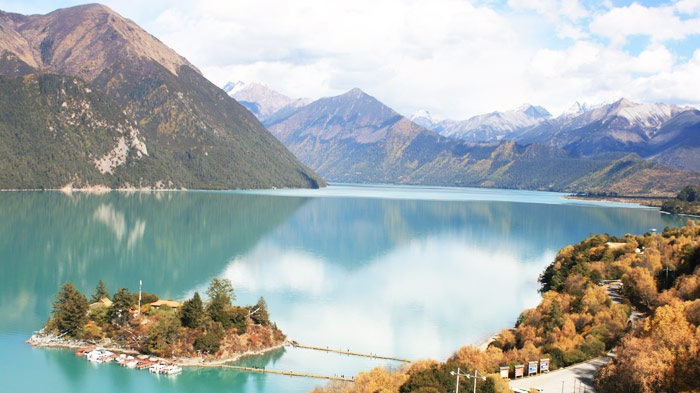 Draksum Tso is one of the most famous tourist spot in Tibet.

Further nearby Draksum Tso is the Xiuba Ancient Castle. Couples often get photographed in front of this castle to incorporate in their photography a vintage essence. Like the other regions, Draksum Tso also possesses a serene beauty with a marvelous atmosphere for the perfect wedding picture. The island contains many monasteries for thematic and customized wedding pictures. The lake, a part of the Bar River along with mountain ranges provides a spectacular hue in the photography.

Besides these regions the Lake Mansarovar is also a famous region for wedding photography. However extreme cold proves to be a hindrance to it. All these wedding photo shoots can be organized by consulting with the local tour guides or surveying the online sites. Proper cameras, lens and apertures are required to make your wedding photography in Tibet the most sought-after aspect.

0 Comment ON "Where Should You Have Your Wedding Photos Taken in Tibet?"