Is the Rainy Season a Bad Time to Visit Tibet?

No one wants their journey to be ruined by the monsoon rain. To those time-pressed travelers or those who happen to only have time for Tibet travel during the rainy season (June to Aug) of Tibet, it is definitely not all a bad time to visit Tibet in this particular timeframe.

While the “monsoon” season in Tibet does bring some rains across the plateau, you can still enjoy a tour of Tibet in the summer without too much hassle. So, read our article and find out what you can only enjoy in rainy season of Tibet travel and what one needs to be careful about from the perspective of our Tibet travel expert.

Is It Bad to Visit Tibet in its Rainy Season?

There is really no “bad” time to visit Tibet, and you can travel there throughout the year, with the exception of the Losar celebrations. In the summer months of the rainy season, it can be said that it is not really a bad time to visit, and there are certain things you can only experience in the summer months.

Firstly, Let’s Figure out When is the Rainy Season in Tibet.

The monsoon season in Tibet runs from late-June to early Sept, though the main months for the peak rainfall are in July and August. As with many of Asia’s monsoon-affected areas, the Tibet Autonomous Region (TAR) is also affected by the Southwest Indian monsoon, which comes up over the Himalayas from the Indian Ocean. 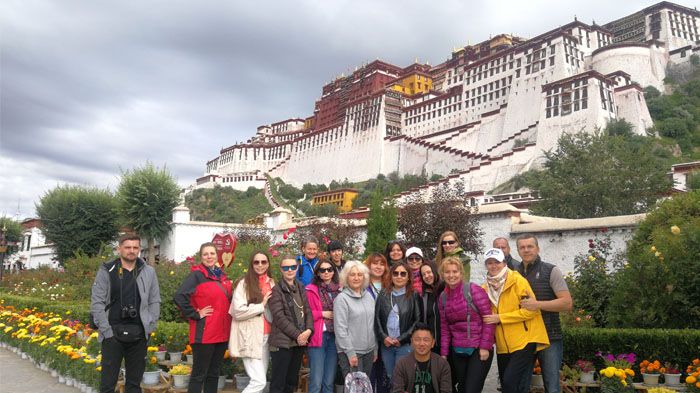 Summer is also a good time to visit the mysterious land, Tibet.

However, the massive mountains of the Himalayas form a natural barrier for the worst of the monsoon. This Shadow Effect forces the clouds to drop the majority of their rain on the western and southern slopes of the Himalayas. The plateau region actually sees a lot less rain than it would if the mountains were not there. The other benefit is that the rainfall normally comes in the late afternoon to evening, and even overnight. This means that most of the days are bright enough for sightseeing, though you can sometimes get a few short-lived daytime showers.

The amount of rainfall varies depending on the region, with higher rainfall in the east than in the west of the region. On average, Tibet sees around 120mm of rainfall across the region in July, and around 90mm in August. In Lhasa, you can see an average of around 120mm per month in July and August, while Shigatse sees a higher average of around 130mm per month. In Shannan, the average rainfall for the two months is around 78mm, in Nagqu it is normally around 100mm on average for July and August, and in Ngari in the west you can expect to see as little as 25mm a month for July and August. Nyingchi has higher rainfall than most places in Tibet, ranging from 130mm to 140mm a month in the peak months. However, in Nyingchi, the peak months of rainfall are actually in June and July, with lower rainfall in August and September.

The good thing about the monsoon in Tibet is that it rarely ever rains for the whole day, unlike in some areas of Asia affected by the Southwest Monsoon. The majority of the rainfall that occurs in Tibet falls in the late afternoons and evenings, while the days are often clear and bright, with plenty of sunshine. However, this does differ in the various regions of Tibet.

In Nyingchi, for example, the rainfall is more focused in June and July, though August and September also see relatively high rainfall. On average, Nyingchi sees around 125mm of rainfall for the season or around 500mm of the annual rainfall of 679mm within the four months of the monsoon season. - Check the monthly weather and temperature in Tibet .

In stark contrast to Nyingchi, Ngari Prefecture in the far northwest of Tibet sees a lot less rainfall for the whole year and is the driest of all the areas of the TAR. With only around 51mm of rainfall in the months of July and August, Ngari only sees around 88mm of rain throughout the entire year.

Things You Can Only Enjoy in Rainy Season

While the rainy season may be a little wetter in some areas, these few months of the year are when the landscape in Tibet is at its most beautiful. Lush grasses cover the plains and prairies of the region, and the vast Changtang Grasslands in the north are the source of some of the best grazing in the world in summer. Wildflowers can be found dotted across the grasslands and alpine meadows, and the scenery is lush and green all over the region. 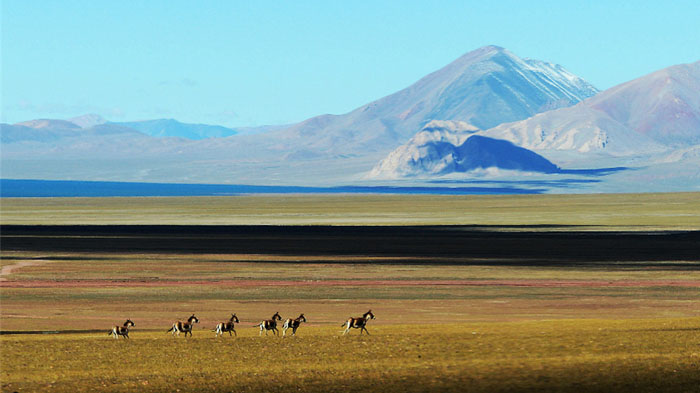 The beautiful Changtang Grassland in rainy season shows its charm for travelers.

The higher temperatures and increased humidity caused by the rains of the monsoon also have a beneficial effect for tourists to Tibet. Higher moisture in the air prevents the chaffing you will find in the winter, and causes a slightly higher oxygen level per breath than through the rest of the year, making it a little easier to adjust and acclimatize.

And the summer months of July and August are also some of the best times for Tibetan festivals, including the Shoton (Yogurt) Festival, the famous Ganden Thangka Festival, and the Nagqu Horse Racing Festival, which is always run in summer for the better grass and ground for racing. What’s more, the view of the scenery from the trains to Tibet is much better, with lush green landscapes all the way from the Kunlun Mountains to Lhasa. - Check more Tibetan festivals across Tibet.

Expert Advice for Travelling in Tibet in Rainy Season

While you can have a great time in the monsoon season, there are some drawbacks and some great points about this time of year when it comes to tourist attractions in the mountains.

The Chance to View Mt. Everest Depends on Your Good Luck

For most of the year, the views of Mount Everest from the Everest Base Camp (EBC) and Rongbuk Monastery are the best in the world. However, in the summer, especially in July and August, the higher rainfall can cause clouds to sometimes obscure the peak of the mountain. The monsoon clouds clinging to high peaks like this can mean that you might not be able to see the peak of Mount Everest when you reach EBC. Caputuring the breathtaking view of Mt. Everest in August

The best option, if you are resigned to traveling in the months of July and August, is to keep an eye on the weather and try to adjust your schedule to get to EBC on a day that is more likely to be clearer. If you fail to enjoy the clear view of the summit of Mt. Everest at EBC, try not missing out the amazing sunrise next morning at Gawu La Pass on the way back to Shigatse. A different perspective may give you a surprise. - Find out the best season to visit EBC in Tibet.

Mt. Kailash Trek in July and August Will Not be Affected

While the rains in the region of Tibet around Mount Kailash do fall in July and August, there is not enough rain to make it worrying for trekking around the kora route. 23-25mm of rain in a month is less than 1mm per day, and has very little effect on trekking the Kailash Kora, so you can be sure that you will still be able to travel to Ngari and take on this ambitious and arduous hike. What you really need to watch for is the fact that it can actually snow at any time of year in the higher altitude areas of Tibet, and Dolma La Pass, the highest pass on the trek, sits at an altitude of 5,630 meters. And our attentive Tibetan guide and staff will closely follow by your side and give you timely help when needed.

For the Overland Tour, Be Cautious with Mudslide in the Following Regions

Some areas of Tibet are more prone to certain weather conditions than others. The areas along the G318 Sichuan Tibet Highway in Nyingchi and near the border with Nepal in Gyirong County can be areas affected by mudslides in heavier rainfall periods. Nyingchi is high in monsoon rainfall, and the road has been known to be hit by mudslides caused by excessive rainfall. 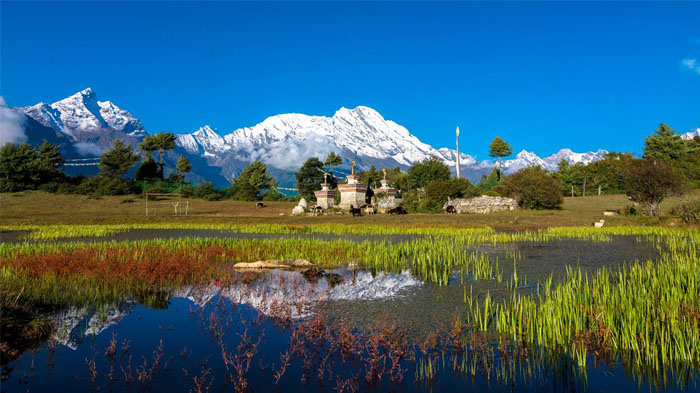 The weather of Gyirong Valley is almost always wet and humid.

Similarly, Gyirong County in Shigatse Prefecture is lower in altitude than the surrounding areas, and as such has more rainfall than the rest of Shigatse. It is the higher rainfall that makes the stunning Gyirong Valley as beautiful as it is. However, it can also be the cause of some mudslides along the road to the border at Gyirong Port.

If you are traveling either of these routes in the summer months of July and August, when the rain is higher, you should keep your eye on the weather forecasts for heavy rainfall predictions. You are also advised to choose to travel with a well-established and experienced travel agency, such as Tibet Vista for only prestigious international travel agencies that can ensure you a seamless travel experience and safe travel you deserve.

While you may think that the “monsoon” the season is not a good time to travel in Tibet, you could not be more wrong. The monsoon in Tibet is comparatively light in comparison with most monsoon regions of Asia, and sees very little actual rainfall in most of the region. There are some areas where it is heavier, but even those areas are not subjected to the torrential downpours and floods that most people associate with the word “monsoon”. So if you are thinking of taking a trip to Tibet this summer, you can be sure that your trip will be as good as any other time of year, if not better.

0 Comment ON "Is the Rainy Season a Bad Time to Visit Tibet?"