Experience Train to Tibet: A Stunning Railway Journey to Tibet via Qinghai-Tibet Railway

Located on the northern side of the Himalayas, Tibet had been isolated from the rest of the world for centuries. How to get to Tibet used to be a big headache for tourists and adventures. Fortunately, after years of construction, tourists can now travel to Tibet by plane or train. And the most stunning way to get to Tibet is by taking a train to Tibet.

Why choose to take the train to Tibet?

Since the Qinghai-Tibet railway operated in 2006, taking a train to Tibet has become one of the most popular railway journeys in the world.

The reasons that millions of tourists choose to take a train to Tibet is not only because the railway is the majestic architecture of human beings, but also the magnificent landscape of the world’s highest Tibet Plateau. 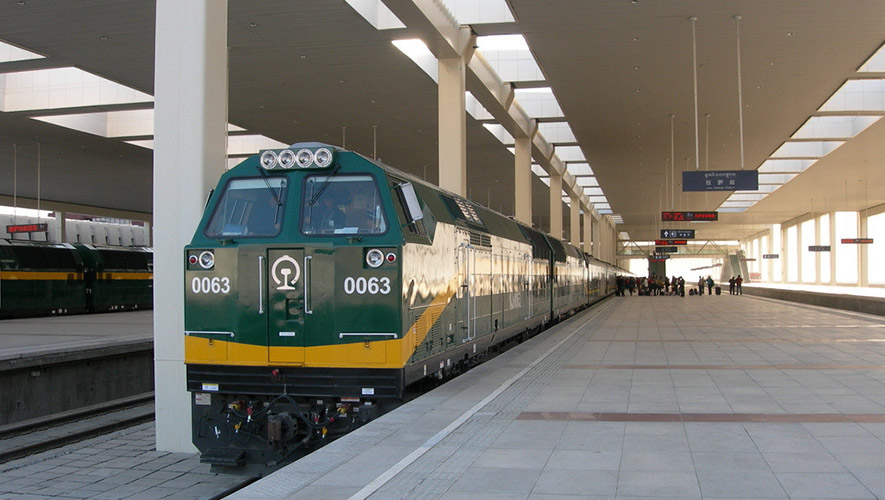 The 1,956 kilometers rail line expands a vast highland area with an average altitude of 4,300 meters above sea level, the highest being 5,068 meters. It is a lifetime experience to travel along the world’s highest railway by taking a train to Tibet.

Despite unbelievable difficulties during its construction, the train to Tibet goes through areas of breathtaking scenery—lofty mountain ranges, snow-capped peaks, emerald lakes, rare animals, vast prairie... You would never want to miss the capricious highland weather—it is now clear and sunny, and yet it will start to snow the next minute. No human beings have ever seen all these natural wonders until the first train left Xining for Lhasa on July 1, 2006.

It would be a huge loss if you decide to travel to Tibet without taking the Tibet train. The specially designed trains to Tibet will make your rail journey through the longest highland railway line in the world safe and comfortable.

What to experience on the train to Tibet?

To ensure a safe journey on the plateau railroad, Tibet trains are specially designed to meet the needs of sightseeing as well as to guarantee oxygen supply to the carriages.

The train to Tibet is the first train that facilities the onboard oxygen supply system. Every car is ventilated with warm, oxygen-rich air. Separate oxygen inhalers are sufficient, ensuring enough oxygen for those in need.

The oxygen supply system onboard Tibet trains start to work after passing Golmud at 2,809 meters above sea level. Even though it runs through the Qinghai-Tibet railway with an average altitude of over 4000 meters, it is safe for passengers with the oxygen supply. 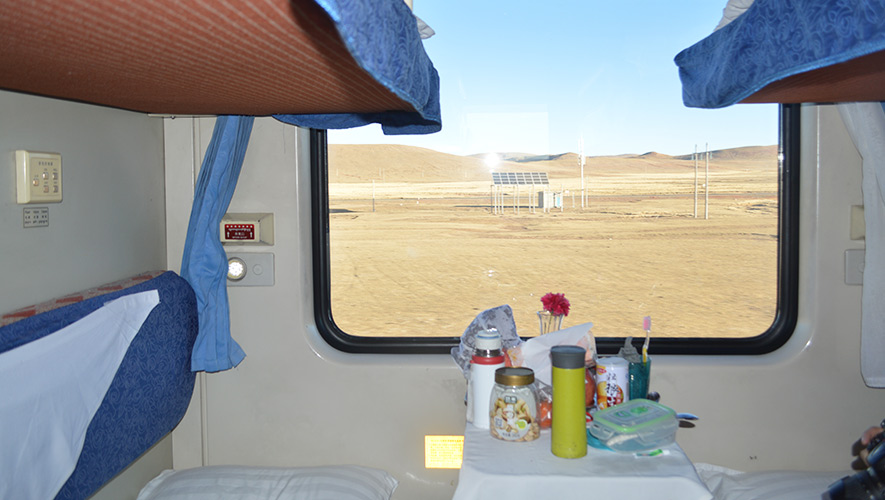 Notice: No matter which class of ticket you want, book your Tibet train ticket as early as possible since the train to Tibet is a popular way to get to Tibet and the ticket always quickly sold out, especially during the peak season from April to October.

Don’t worry too much about your life onboard. There are a lot of advanced facilities on Tibet train to ensure you a safe and comfortable journey to Lhasa, like the power outlets, 24-hour hot water dispensers, toilets, etc. Also, the dining car offers three meals a day and food trailers that sell boxed meals, snacks, and fruits on board.

The Tibet train cars are designed as per suggestions from Tibetan scholars and experts. The curtains, table cloths, and carpet are all in Tibetan colors and patterns, presenting warm ethnic attractions.

Where do you start the Tibet train tour?

As its name suggests, the Qinghai-Tibet Railway goes from Xining to Lhasa. With easy access to other parts of the country, the railway to Tibet actually connects the whole nation with Tibet. 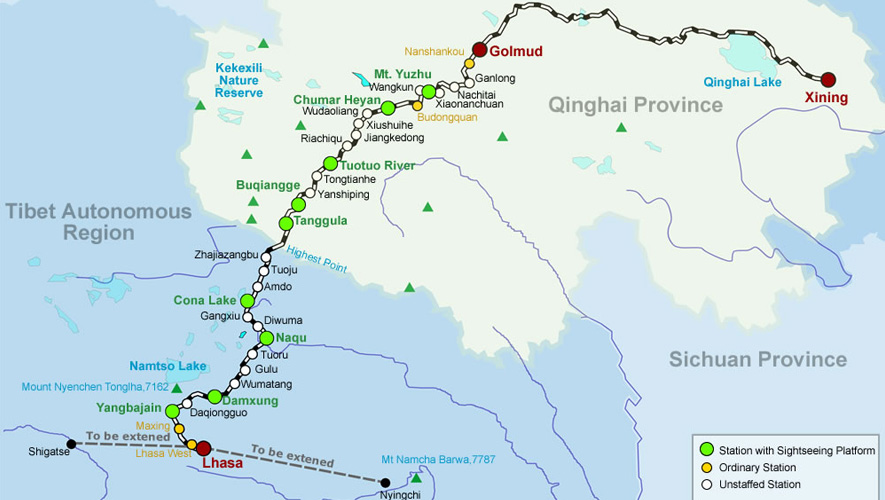 You can start the Tibet train journey from Beijing, Shanghai, Guangzhou, Chengdu, Chongqing, and Lanzhou. But if the long-distance travel from your first stop to Xining is too overwhelming, you may choose to fly to Xining first, and then take a Tibet train to Lhasa. The rest of the trip would be no more than 21 hours - a good sleep overnight and a full day’s spectacular views.

Guidance to the Scenic Spots through Your Tibet Train Journey

The best part of the Tibet train journey is from Golmud all the way to Lhasa.

It first stops at the Yuzhufeng Station, an altitude of 4100 meters. When Tibetan antelopes, yellow sheep, and other wild animals suddenly flash by your window, you know you’ve reached the world-renowned Kekexili, which has just been recognized as a World Heritage site. 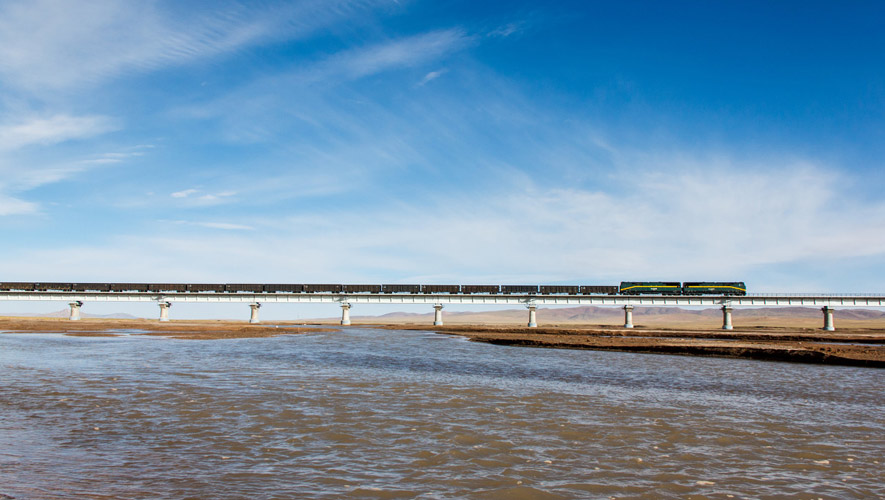 The train then goes through the world’s highest tunnel - the Fenghuoshan Tunnel winds its way through the high plateau prairie and comes to Tuotuo River, the time-honored source of the Yangtze River. You will rarely see any mountain peaks below 5,000 meters when it reaches Tanggula Mountains. The legend goes, “When you reach the Tanggual, you are very close to heaven”. The Mountains divide the Qinghai-Tibet Plateau into two different ecosystems - the north is bitter cold while the south is warm and moist. You will feel cold no more as your train rushes into the beautiful pasture land. As it approaches Nagqu Station, the scorching sun is still scary, but the pasture land is busy with people trading and having festival celebrations. The next treat is North Tibet Pearl - Dangxiong Wet Land. Known as “The Lungs of Dangxiong”, the wetland is capable of having an impact on the local climate. When you see dazzling white clouds ascending from the distance, you know it is the Yangbajing, widely known for its hot springs. Finally, you arrive at Lhasa Station in the evening, the end of a long journey.

How to book the train ticket to Tibet?

Although Tibet train tickets are officially sold at train stations and on its official website, it is difficult for tourists to get one during the peak seasons (April - October). The best method is to book a Tibet train ticket through a local travel agency.

As most passengers on the Qinghai-Tibet train are tourists, the railway operator usually sells tickets to travel agencies, which resell them together with tour packages. However, not all travel agencies are qualified to get the tickets. We, Tibet Vista, have been selling the Qinghai-Tibet train tickets since 2006. Each year, we send over 3,000 travelers to Tibet by train. The best sellers of our products are "train tour + Tibet tour". Please order at least 30-60 days prior to departure. The earlier, the better.

Since the completion of the Qinghai-Tibet Railway in 2006, taking a train to Tibet has become a once-in-a-lifetime experience for millions every year.

The featured Tibet train with an oxygen supply system onboard makes the journey through the world’s highest railway safe and comfortable. You don’t need to worry about your life onboard.

You can start your Tibet train journey from Beijing, Shanghai, Guangzhou, Chengdu, and some other gateway cities in the mainland of China, or just get to Xining by air and take the train from Xining to Lhasa for the most stunning scenery through the Qinghai-Tibet plateau.

Don’t let the planning stress you out. Our Tibetan travel guru is always ready to help you plan a lifetime Tibet trip FOR FREE.