Travelling to Tibet in Different Seasons

In winter, you can enjoy the warm sunshine in Lhasa. In spring, you will be unwilling to leave the land of peach blossoms in Nyingchi Prefecture. In summer, you will be intoxicated in the fresh air on grassland of Shigatse, and in autumn, you will be refreshed by the desolation and magnificence of Ngari Prefecture. Holy lakes shine at varied colors as seasons change, trees and flowers decorate the sceneries and a natural museum of plants is well protected here.

Spring is a season when everything comes to life and flowers of all sorts are blooming in a riot of color. With the foil of snow mountains and white clouds in blue sky, the peach trees in full bloom in Nyingchi become more attractive. There are various highlights of Tibet in spring. Many tourists visit Lhasa city in spring to appreciate the Potala Place, Jokhang Temple and Drepung Temple. 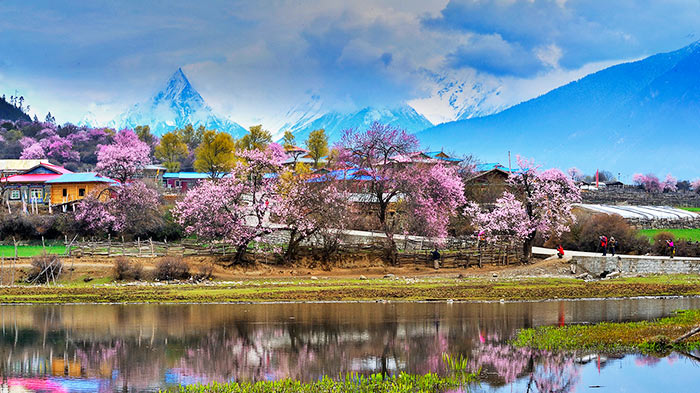 One of the best places in Tibet to see spring in full bloom is Nyingchi, with its immense groves of peach trees throwing out their full blossom as the weather warms up. Throughout the latter part of March and on through April, the peach blossoms come into full bloom, and the region turns into a sea of color, as a multitudinous variety of shades of pink cover the trees all over the prefecture. Spring in the eastern areas of Tibet comes much earlier than anywhere else in the region. While Lhasa and Lake Yamdrok are just starting to recover from the grip of winter, Nyingchi is experiencing the warm, refreshing, life-giving temperatures of spring in full flow.

Nyingchi is a place of plants and flowers and wild forests. All across Nyingchi, the trees become a vast sea of peach blossom, which gives rise to the famous Nyingchi Peach Blossom festival. The dates for the festival depend on the blossoming of the peach trees, and it is normally around the middle of March that the buds on the branches start to flower. During the festival, while the trees are in full bloom, not only can you enjoy the beauty of the area covered in these delicate little flowers, but also there are many activities that occur, including a local photography contest. During the peach Blossom Festival, local people will organize festival games such as horse racing, archery, and stone carrying. The festival usually lasts for around a month, and is one of the most beautiful sights in Tibet.

Nyingchi is famous for its verdant mountain ranges and clear rivers, and the most famous of all is the Yarlung Zangbo River Gorge. 496-kilometers long, and deeper than the Grand Canyon in America, the gorge cuts through the mountains, making a u-turn around Mount Namjagbarwa, the most beautiful mountain in China. In addition, a walk into the only county in China without a single road until recently - Medog County lies completely inside the famous Yarlung Zambo Canyon - is like taking a trip to the isolated and mysterious land of Xanadu.

With pleasant temperature, summer becomes the peak tourism season of Tibet. Though the sunshine is very hot, it is still very comfortable to stay in Tibet as long as you avoid to bathe in the sunshine directly. Summer is a great time to visit both cultural and natural sites of Tibet. Every year from May onwards, the temperatures warm up to the heat of the Tibetan summer. For those who love summer, but fear the tropical heat of many lowland countries, Tibet is an ideal place to visit. Temperatures rarely reach more than 25 degrees here, and you get to see the snow-capped mountains in the warmth of the summer sun. 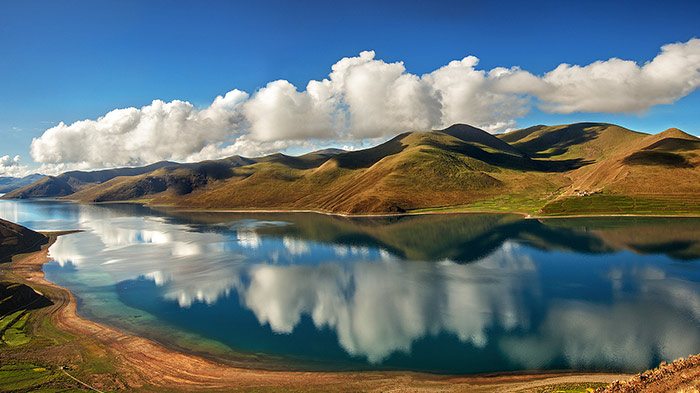 Summer may well be the rainy season in Tibet, with the southeast monsoon bringing the rains in from the tropics, but there really is very little rain in the region, even in the height of the monsoon. Skies are still blue most of the day, with clouds drifting lazily past and surrounding the distant horizons. The plains and prairies turn a beautiful verdant shade of green, and the wildlife can be seen all over the plateau relishing the summer rains and the lush green vegetation.

One of the advantages of summer on the plateau is the increased oxygen levels in the air. The atmosphere goes through changes as the rains come, making the air richer with oxygen and reducing the risk of altitude sickness for some. It is also the height of the festival season in the region, and all over Tibet there are different celebrations and gatherings. 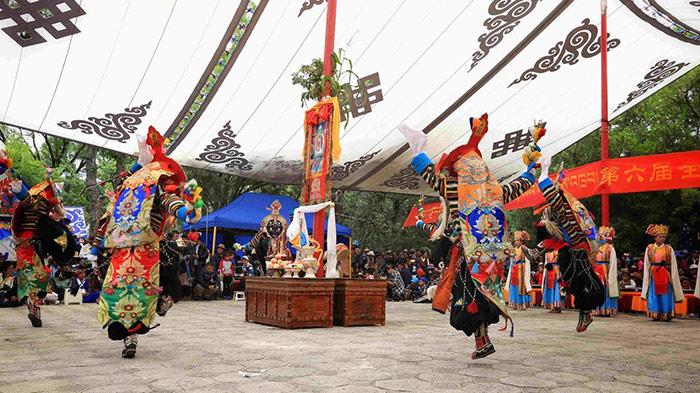 The Shoton Festival is one of the major festivals in the Tibetan calendar, and the celebration marks the end of the Yarne - the 100-day summer retreat of the Tibetan Buddhist monks. Traditionally, the festival starts on the last day of the sixth month in the Tibetan lunar calendar, and lasts for six days. Celebrants eat yogurt and give offerings of the same to the monks who have spent the last three months inside the temples, praying for all the species of the earth, and ensuring that they do not get demerits for killing any animal, bird, or insect. Tibetan operas continue for the entire time and the centerpiece of the whole festival is the unveiling of a giant Thangka painting for the monks and people to revere and pray before.

August is another month where Thangka take center stage, with the Thangka Buddha Unfolding Festivals in Shigatse and Dagzê County, Lhasa. The huge Thangka are unveiled at the Tashilhunpo Monastery in Shigatse and at the Ganden Monastery in Lhasa, and the people gather to pray and throw the sacred hada on the painting.

The Ongkor festival, which is held as the summer ends, just before the time to harvest comes around, is another great festival, and an opportunity to see the real lives of the Tibetan people. The festival celebrates the upcoming harvest, and the people, led by lamas, walk around the fields in a form of kora, praying for a bumper crop. The harvest normally starts around the end of August or beginning of September, and depends largely on the coming of the rainy season.

With crystal clear blue-skies and flying golden leaves, Tibet’s autumn will offer you a perfect chance to trek in Tibet such as trekking in Kailash. Autumn is also a great season to drive along Sichuan-Tibet Highway, Yunnan-Tibet Highway and across Ngari prefecture of Tibet. It is also the best time to view Namtso Lake, one of the most beautiful lakes in Tibet. However, the dry weather of autumn will lower the skin's metabolic rate and its ability to retain moisture. Do take some skin care products. 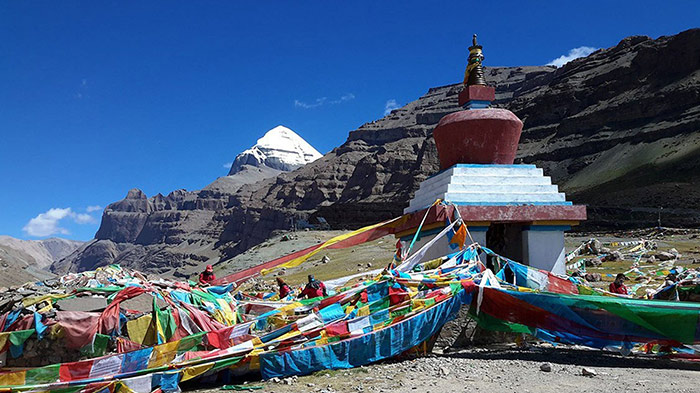 Autumn is a great season for trekking in Kailash

Autumn arrives in Tibet in September, and the lush green trees start to turn yellow, as they head for the reds and golds of full autumn, before dropping to the ground to cover the woodland floors in a carpet of beautiful color. For photographers, autumn is like heaven, with a myriad of bright and rustic colors covering the ground and the trees, and is one of the best time for mountain photography in the entire year.

Temperatures start to cool down, although not so cold that it is uncomfortable. Average temperatures in autumn reach around 15-18 degrees, and drop as low as 10 degrees in some places towards the end of October. However, it will not get really cold for another few months, and the cooler air and better weather makes it an ideal time to trek in the region.

Autumn is also the best time to visit the world-famous Mount Everest, and do the 70 kilometer trek from Tingri to Everest base Camp (EBC). The clear skies make for the best views of the mountain, both from the base camp itself and from the various outlying viewing spots around the area. At 8,848 meters high, it is visible for many miles in every direction.

In winter, there is warm sunshine and snow covered plateau in Tibet. Travelling to Tibet in winter to spend a happy Tibetan New Year with local people, view authentic snow land of Tibet, Namjagbrawa Peak and Mt. Everest and bathe in the sunshine at Jokhang Square is very interesting. But you cannot go to Namtso, Ngari and Medoc in winter because heavy snow interrupts the roads in these areas. Tibet is a good place both to avoid summer heat and escape winter cold. 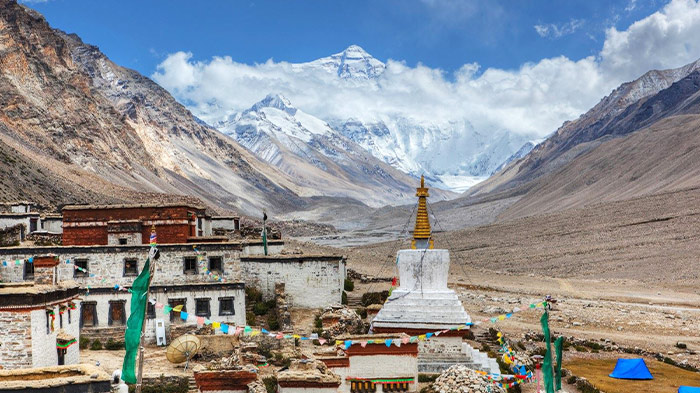 Winter is a nice time to visit Mt. Everest

One of the biggest myths about Tibet is that it is not possible to visit the region in winter, and this is where many people are much mistaken. While the winter in Tibet can close off some of the regions of the plateau due to heavy snow, there are still many places that can be visited right up to December, and even on to the spring.

November, though a little cold, is a nice time to visit Everest, and the major benefit of a winter trip is the reduced costs. Many places give discounts in winter for tourists, and it is much easier to get around and visit the attractions as there are far fewer people after the end of autumn. Temperatures can drop to below freezing, even in the daytime in some areas, but the sun is still strong, and can warm you a little despite the cold.

The start of winter also heralds the arrival of the migrating birds from the northern regions of Europe, which come to winter in the fertile plains and wetlands outside Lhasa. One of the most beautiful sights in the world, the wetlands are filled with ruddy Shelducks, black-necked cranes, and hundreds of other species, and it is a twitcher’s paradise.

Clothes to Wear for Tibet Tour

Due to the colder climate even in summer, warm clothes are essential for your Tibet trip. The higher the elevation, the colder it can get, and the temperature can drop dramatically at night. The best things to pack are: thick woolen sweaters, warm pants, several thinner t-shirts with long sleeves as layering is the best way to keep warm, and some thermal underwear, just in case.

Gloves are necessary, and a warm hat and waterproof jacket can be useful as well. And it is still a good idea to have a thick sweater with a jacket on top, as the wind chill factor can reduce the temperature even more. Good sturdy boots or shoes are essential, as you will still do a fair amount of walking, and for those going trekking, hiking boots are the best option.