As the peak of the summer tourist season in Tibet, July and August are two months that can offer tourists to the region some of the best sights, most exuberant festivals, and the best weather that this high-altitude plateau has to offer.

While July and August is the peak of the monsoon season in Tibet, touring in July and August can give you the best cultural experience of the year, with numerous stunning festivals to choose from, including the famous Shoton Festival. It is also the time when the vast grasslands and prairies come into bloom, with summer flowers dotting the lush green plains and horse racing festivals being some of the most exhilarating events of the year.

Climate and Weather of Tibet in July and August

July and August may be the wettest months of the year on the Tibetan plateau, but when you consider the amount of rainfall over the entire region, summer is obviously the best time to visit for sightseeing. Temperatures range from a balmy ten degrees in the west to as high as 23-25 degrees in the central and eastern areas and the sunshine can make it feel comfortably warm, even in the most remote areas.

Winds are not as strong in the summer months, and while there is often rain, it normally falls in the late afternoon and evening, leaving the days clear and bright for sightseeing. There can be up to 190mm of rainfall throughout each of the two months across the plateau on average, which is far less than the lower regions affected by the strong Southwest Monsoon.

Top Destinations for Tibet Tour in July and August

July and August are the peak months for tourism in Tibet, and are the most popular time of year to travel to the region for both international and domestic tourists. This is the normal holiday season around the world, and thousands of travelers enter Lhasa every day throughout July and August.

Lhasa is the top destination in Tibet during the summer months, and it is no surprise that the Tibetan capital can get very busy. The famous Jokhang Temple is the most sacred Buddhist temple in Tibet, and was built in the 7th century to house one of the oldest statues of Buddha in the world, believed to have been blessed by Gautama Buddha himself. Nearby, the Potala Palace is the winter palace of the Dalai Lama, and once formed the center of Tibetan governance, until the governing offices were moved to Norbulingka in the 17th century. The city is surrounded by monasteries of the Gelug School of Tibetan Buddhism, the largest of the several sects that have sprung up in Tibet over the centuries. 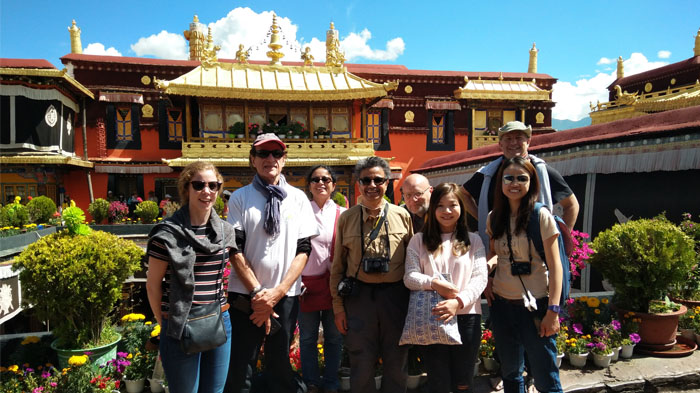 A stunning lake located around six hours drive from the capital, Lake Namtso, also known as the “Heavenly Lake” is the largest lake in the Tibet Autonomous Region, and a major pilgrimage destination for Tibetan Buddhists. Lying between the vast Changtang Prairie and the Nyenchen Tanglha Mountains, the lakeshore comes alive in the summer months, and it is common to see herds of yaks grazing alongside the lake, watched over by their nomadic herders.

ne of the most important sacred lakes in Tibet, Lake Yamdrok is just a short drive outside Lhasa to the southwest. Located on the road from Lhasa to Gyantse, this unique lake covers a wide area, and is believed to be the lifeblood of Tibet. Legend says that if the lake ever dries up, Tibet will become uninhabitable for all creatures. The landscape of the mountains that surround Lake Yamdrok are alive with wildflowers in July and August, and the meadows and grasslands are popular grazing areas for local shepherds in Lhoka.

The world’s highest mountain, Mount Everest lies in the far west of Tibet, a lonely spear of ancient rock pushing towards the heavens. Located on the border between China and Nepal, this massive peak is one of the world’s most famous tourist attractions, and the main reason why many people travel to Tibet. And with its easily accessible base camp and local Rongbuk Monastery, it is a delightful place to visit in the summer months from July to the end of August. However, there is no guarantee that the summit will be visible, as there can be cloud cover in the peak summer months. >> Check to join in an Everest Base Camp tour now. 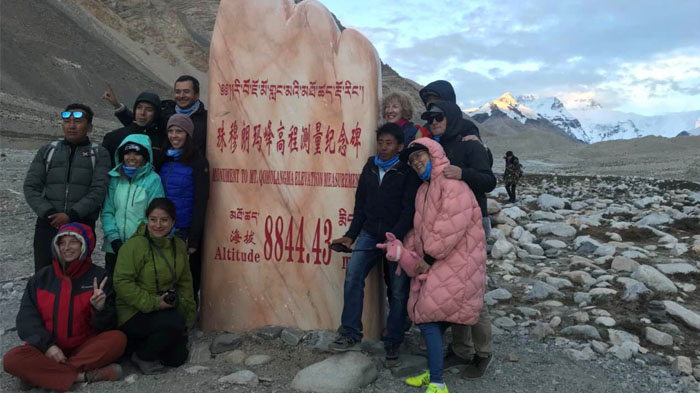 The world’s highest mountain, Mount Everest lies in the far west of Tibet

Mount Kailash has long been known as the most sacred mountain in the world, held in reverence by four separate religions. Believed to be the site of an ancient mystical battle between Buddhism and Bon, it is one of the few mountains in the world that has never felt the tread of mortal man. However, summer is not ideal for trekking the kora route around the mountain, due to muddy trails and the possibility of landslides in this remote area of Tibet.

The nearby Lake Manasarovar is also sacred in Tibetan Buddhism, as well as for Hindus. Many legends surround the lake, including the Hindu belief that the lake was born in the mind of Lord Shiva and can absolve the faithful of the sins of an entire lifetime. It is also believed to be the location where Maya Devi conceived Buddha almost 3,000 years ago. The lake is often surrounded by wild animals and herds of yaks in the summer months, and is an amazing sight.

Tibetan Festivals in July and August

One of the grandest of the Tibetan festivals, the Shoton Festival, also known as the Yogurt Festival, celebrates the end of the 100 days of fasting of the monks for the people of the world. Originating hundreds of years ago, the monks would spend over 3 months in fasting, and as thanks for their sacrifice, the people would bring them yak milk curds to help them regain their strength. This changed to yogurt over the centuries, but the fasting and thanks still remain today. 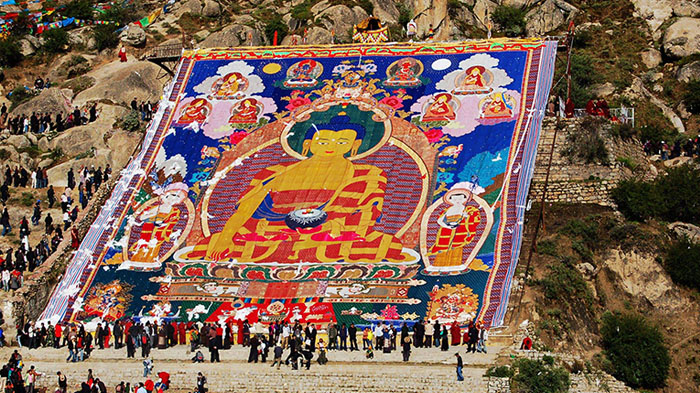 One of the grandest of the Tibetan festivals, the Shoton Festival

The biggest of the many horse racing festivals on the plateau, tens of thousands of nomadic herders and their families descend on the famed Nagqu Grasslands in August for the greatest racing and performance event in the Tibetan calendar. The festival includes several other events showcasing horsemanship, as well as games, contests, and lots of singing and dancing, interspersed with classic Tibetan operas.

Held on the 15th day of the sixth month in the Tibetan calendar, the Ganden Thangka Festival is a celebration to commemorate the enlightenment of the Buddhist master, Je Tsongkhapa, the founder of the Gelug School. During the festival, thangka paintings are unveiled and hung for all to see, with devout Buddhist praying at the hem of these sacred Buddhist relics.

A similar thangka festival is also held at the Tashilhunpo Monastery in Shigatse, which has a history that dates back over five centuries. Held for three days in the middle of summer, the festival sees the hanging and unveiling of the different Buddha images n each day, to remind people of the tenets of the Buddhist way towards enlightenment.

One of four great seasonal festivals in Tibet, the Chokor Duchen Festival is held on the 4th day of the 6th month, which is usually in August. The festival celebrates the first sermon on Gautama Buddha at Sarnath near Varanasi in India, and many devout Buddhists climb to the top of Mt Gambo Utse to burn incense and hang prayer flags.

Packing List for Tibet Tour in July and August

Due to the rainy season and large temperature difference between day and night, it is a good idea to bring long-sleeved clothes, a down jacket, an outdoor jacket, raincoat, and waterproof shoes. Most of Tibet does not see very low temperatures in July and August, so you can get away with t-shirts and light pants most of the time. Sturdy boots or shoes are still a must, as the rains can leave some places a little muddy, and the ground in most of Tibet is pretty rough and rocky.

As well as clothing, you may need to add a few other essential items to your general packing list. You should make sure you bring any regular medication that you will need, as well as a small first aid kit, just in case. You will also need to have a good sunblock, moisturizer, lip balm, sunglasses, and protective headgear, as the harsh sun and biting winds can be damaging to your skin. Prepare spare batteries for your camera and enough cash as it is still not very convenient to draw money from ATMs or banks in Tibet, especially in remote areas of Tibet.

Tips for Tibet Tours in July and August

As it is the peak tourism season of Tibet, it is advisable to join in a group tour to cut down the cost. You can stay overnight in a family hostel as a good choice for a more authentic Tibetan experience. While they are low-cost form of accommodation, they are more than suitable for a good place to stay and are pleasantly comfortable.

Trekking is not a good idea in the rainy season. While there may not be the torrential rains that some monsoon areas experience, it can be enough to make the trails muddy and dangerous, and it is common to hear of mudslides and landslides in Tibet during the wettest months of summer.

It is also a good idea to book your trip, apply for the permits, and book your train tickets or flights well in advance, as these months of the year can mean high demand on all of the requirements for traveling to Tibet.

July and August are the best months of the year to visit Tibet, with better warmer weather, fewer restrictions on where to travel, and the benefit of seeing the plateau grasslands at their most beautiful. While it can be crowded in Tibet in the months of July and August, it is well worth traveling in summer, and the benefit of higher oxygen content is an added advantage when acclimatizing. 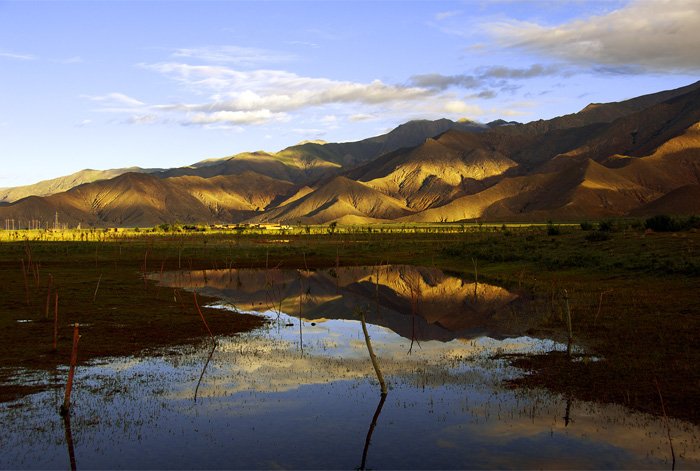 Breathtaking view of Tibet in August shot by our clients.