Top 8 Kora Routes in Tibet: where to experience the best Tibetan pilgrimage

Tibetan Buddhism has become an integral part of the everyday lives of local Tibetans, and this includes one of the most important Buddhist rituals there is - the “Kora”. Translated as “revolution”, the kora is just that, a religious and spiritual circling of a certain iconic religious site, both natural and man-made.

Performed as a walk around the sacred site in a clockwise direction, the kora is one of the best ways to learn more about Tibetan Buddhism and the people of the plateau. So, let’s take a closer look at this long-held Buddhist tradition.

Cultural and Religious Significance of Kora

Tibetans believe that the practice of Kora will shield them from all kinds of sins, misfortunes and evil attacks. It is as sacred as performing meditation or chanting holy rhymes. The ritual of Kora is manifold. It can be performed by revolving around a sacred object, lake, mountain, monastery or even a sacred stone.

A devoted Tibetan pilgrim is turning the prayer wheel.

Kora in Tibet can be performed by following the top 8 Kora routes in Tibet. Pilgrims often tread upon these holy cities or even prostate out of deep devotion. It includes an action of lying stretched on the ground, rising up and then doing the same.

Another very interesting form of Kora includes putting up flags in the mountain tops. These flags with mantras on it are put up by the pilgrims and it is a popular belief that as the flag flutters with wind, these mantras spread blessings in the region.

Tibet has a wide number of sacred or holy sites across the plateau, from the most sacred such as the Jokhang Temple or Mount Kailash to the kora around the small monasteries of the remote mountains. With hundreds, or possibly thousands of kora routes to choose from for this spiritual ritual, there are eight that stand out above the rest as the most important and most popular kora routes in Tibet.

Nangkhor Kora, the Shortest and Closest Kora to Buddha

The Nangkhor Kora is considered to be the holiest Kora in Tibet. Lhasa’s Jokhang Temple is the temple in which resides the ancient statue of 12-year-old Sakyamuni Buddha, brought to Tibet in the 7th century by the Princess Wencheng. The practice of this unique kora includes circling of the Buddha hall where the statue stands. Every day of the year, pilgrims crowd the Jokhang Temple practicing the kora by circling around the hall, spinning prayer wheels and praying to Buddha. - Check the classic Lhasa tours in Tibet. 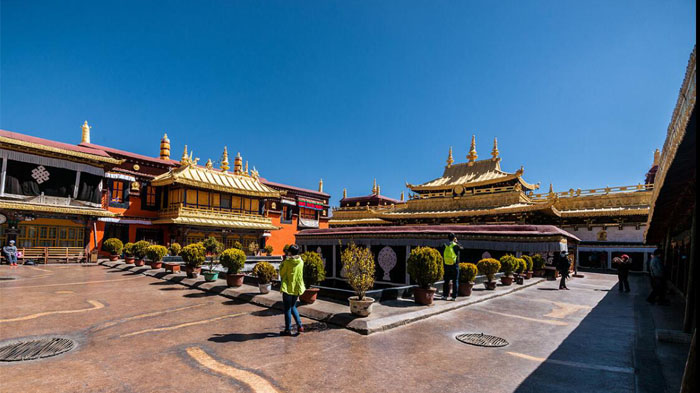 Nangkhor Kora is the closest and holiest kora in Tibet.

Barkhor Kora, the Most Classic and Best Known Kora in Tibet

The kora practice along Barkhor Street is another kora circuit often visited by tourists and pilgrims alike all year round. The famous Barkhor Kora route runs for almost seven kilometers around the Jokhang temple in the Chengguan District of Lhasa. This Kora starts and ends at the main gate of Jokhang temple and follows the route of Barkhor Street along its entire length. The pilgrims often prostrate around the kora as a way of devotion and worship. It is the ambiance of holiness and spirituality that attracts tourists from all over the globe. Barkhor Street is mainly a business-oriented hub in the center of Lhasa, but is also the sacred kora route preferred by most Tibetan pilgrims. 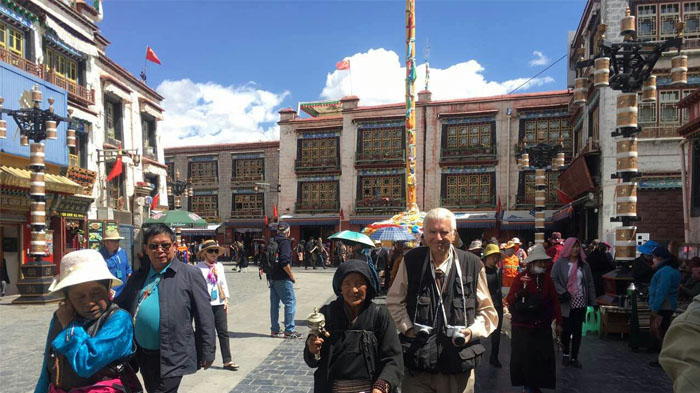 Following a Tibetan granny to experience the Barkhor Kora

Tsekhor Kora, Most Famous Kora at the Foothill of Potala Palace

The Potala Palace is another site of pilgrimage in Lhasa, just to the west of the Jokhang Temple, and has major connections with Tibetan Buddhism in the capital as the former center of the Tibetan Buddhist governance. The Tsekhor Kora is the revolution made by the pilgrims around this ancient palace. The Tsekhor Kora runs for around 3 kilometers around the palace and the pilgrims often make the trip by prostrating along the entire route. This palace, with its sacred visage, stands as a magnificent kora route for both tourists and pilgrims at any time of the year. 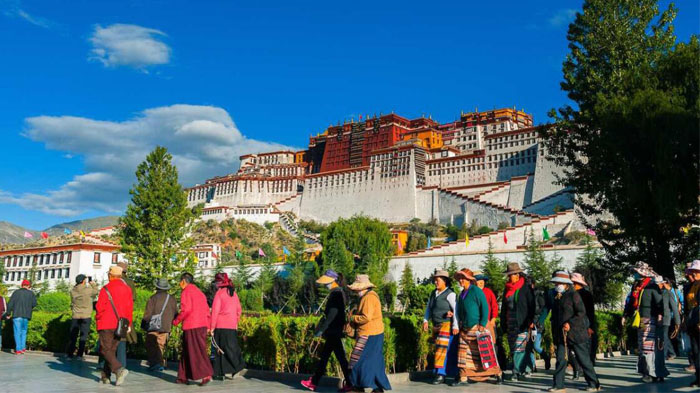 Lingkhor Kora forms the outer boundary of Lhasa district and is the kora with the longest route in the Tibetan capital. The pilgrims take nearly 4 hours to complete one circle to finish the circuit. Locals often have to take a rest in their on and on the journey. While circling around Lingkhor Kora, Tibetan pilgrims spin the hand-held prayer wheels and chant Buddhist scriptures. This Kora route and the journey give the pilgrims an essential sense of solace and peace. An important kora route in Tibetan Buddhism, the essence of the kora is the circumambulation of the center of Lhasa, the center of culture and religion in Tibet. 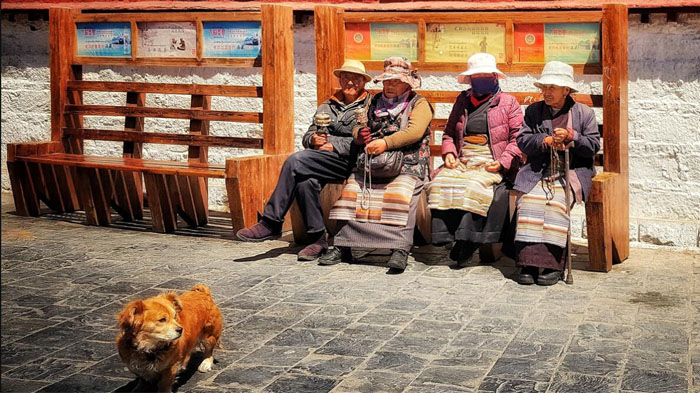 Having a rest during the Lingkhor kora

Apart from the core Lhasa area, Lhasa’s stunning surroundings include some additional Kora routes. One of the most famous ones is the Namtso Kora. "Namtso" in Tibetan means "heavenly lake" and the Namtso Kora trek is all about taking a walk around the lake. This lake is one of the Great Three Holy Lakes in Tibet. There are areas of this unique trek near the lake where tourists can take a walk through the rocky terrain, along with the pilgrims that are making the circuit around the whole lake. The pilgrims often take a holy bath in the lake and prostrate at a place where two rock towers stand like hands. - Learn more of the classic Namtso tours and expert’s guide to it 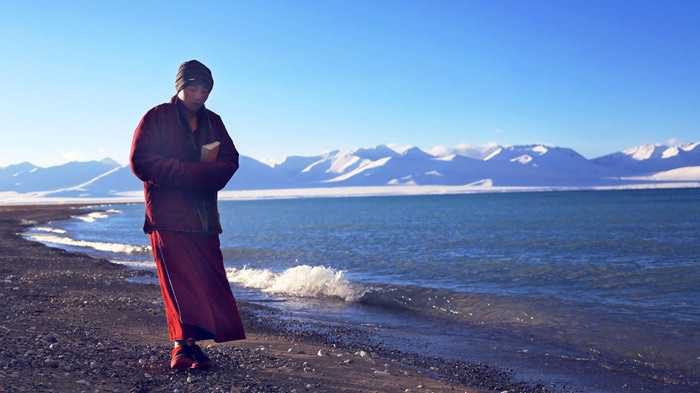 Practicing the kora along the amazing view of Namtso Lake

Summer and autumn are the best times to observe Kora in Tibet. The cool weather accompanied by the sacred ambiance of incense and prayer purge half of the human predicaments flocking there. The pilgrims can also come across several mysterious caves in this Kora route. Yangpachen Hot Springs offer the tourists a soothing bath along with a great view of Snow Mountains afar after their visit to the Namtso kora route, to wash away the aches of the trek.

Tashilhunpo Monastery is located in the Shigatse district of Tibet. This Kora starts from the main entrance of the monastery, follows its wall and continues through an alley. The pilgrims pass around the western side of the monastery and reach a hill where there are rows of prayer flags fluttering in the wind. The entire circumference of the monastery entangles the pilgrims with beautiful sights and views. The best time to observe this Kora is in the morning. From the Shigatse Dzong, one can have a sumptuous view of Shigatse city which is bewitching and enthralling. 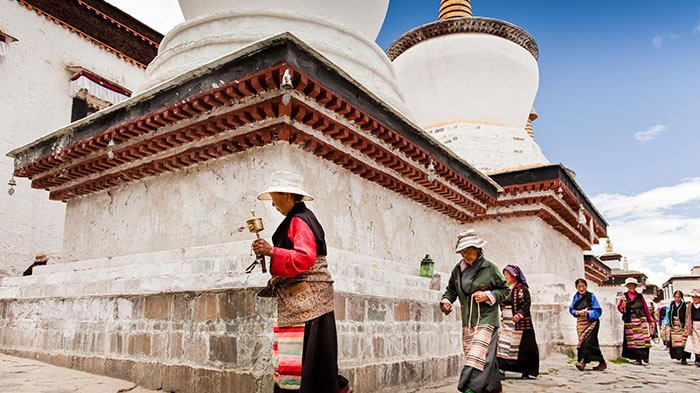 Mt. Kailash Kora has one of the most difficult routes for pilgrims. The route includes encompassing Mt. Kailash, sacred not only to Buddhists but also to Hindus and Jains. The Hindu lord, Shiva, resides here with his consort, Parvati, according to Hindu mythology. Travelers from everywhere flock to have a view of this mountain and the world famous Lake Manasarovar, one of the Great Three Holy Lakes of Tibet. The Kailash kora trek starts from the village of Darchen, and runs through winding hilly roads, valleys, lakes, and ice-laden mountain passes with an altitude of nearly 5,000 meters. It appears to be a true pilgrimage as the pilgrims have to follow an austere journey where their patience and resolution will be tested every hour of the day. 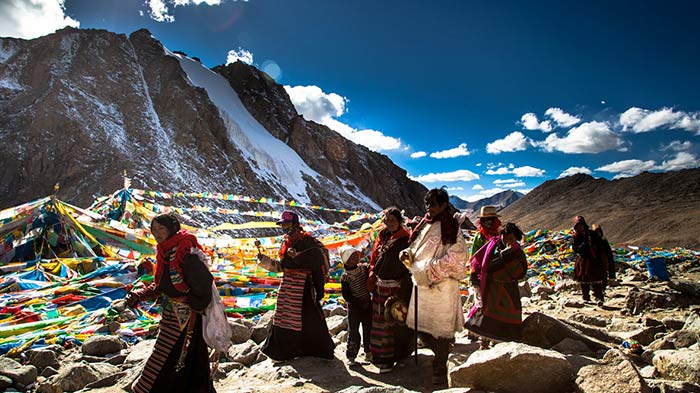 The 3-day Mt.Kailash is the most challenging one, both physically and mentally.

Non-pilgrims often join the locals and pilgrims in this journey and share their beliefs and customs. It is often quite bewildering to think that some people save their entire life for one Kora trip. Mt Kailash is encircled by five monasteries which provide accommodation for visitors and pilgrims. - Check the latest tour date of Mt.Kailash tour in Tibet.

The best time to head to Mt. Kailash to undertake the Kora route is from May to October, because during the winter it is all snow-clad and perilous to trek. Mt Kailash is seen to be at the height of its beauty and spirituality around the 15th day of April, during the famous Saga Dawa Festival, an annual festival of Tibet that celebrates the birth of Buddha Sakyamuni. Tourists and locals crowd near Mt Kailash at this time and this forms an important aspect of Mt Kailash Kora.

Tangra Yumco Kora Lake is the biggest sacred lake according to Bon religion. It is situated in the Nagqu area, north of Tibet. There is a beautiful temple in a hanging cave near the lake. This lake is a breeding ground of spirituality and Buddhists believe in circling the path around the lake in a clockwise fashion whereas Bonists revolve in an anticlockwise fashion.

Trekking along a kora route in Tibet is one of the best ways to learn more about the Tibetan people and gain a greater understanding of the unique Tibetan Buddhism. The spirituality that can be felt when accompanying pilgrims along the kora route, as they spin their small prayer wheels and chant the Buddhist sutras, is unimaginable, and one really has to experience it to understand it in any way. So if you have time for a trip to Tibet, make some time to take on one of the kora routes in the region, and learn how this mystical and spiritual walk can help change lives for the better. 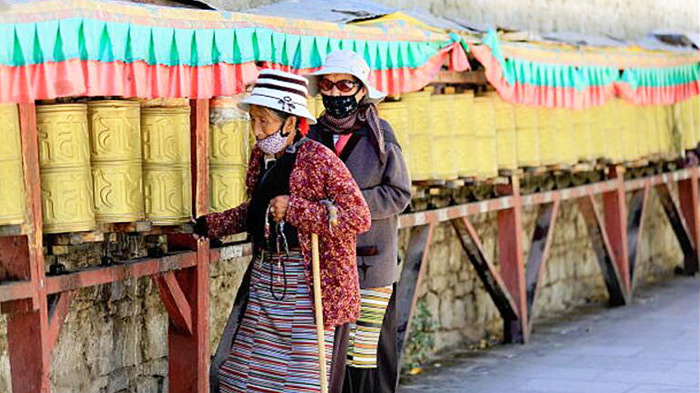 Kora is a type of sacred pilgrimage for Tibetans 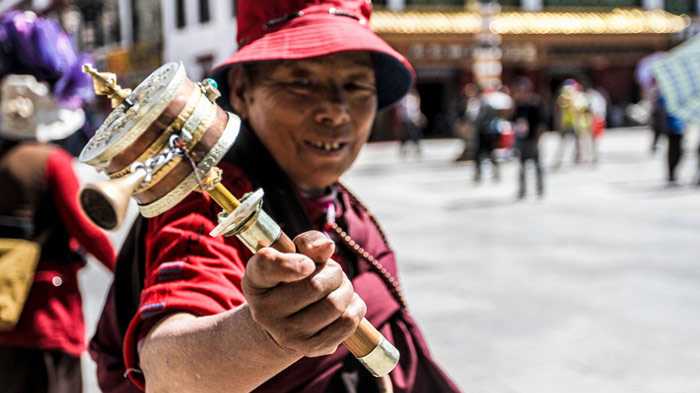 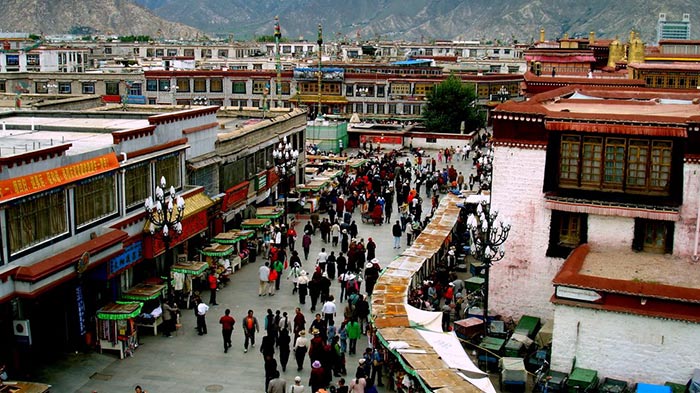 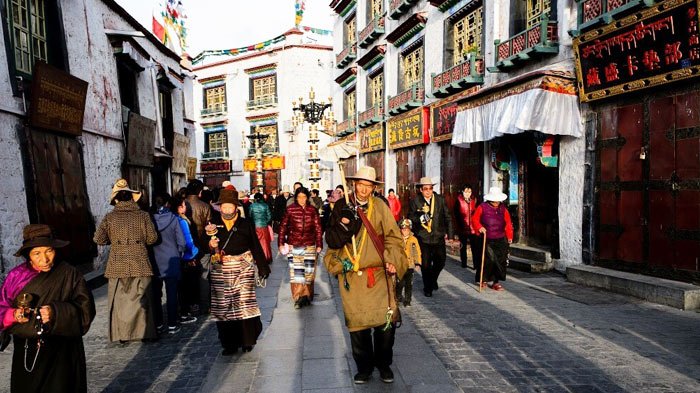 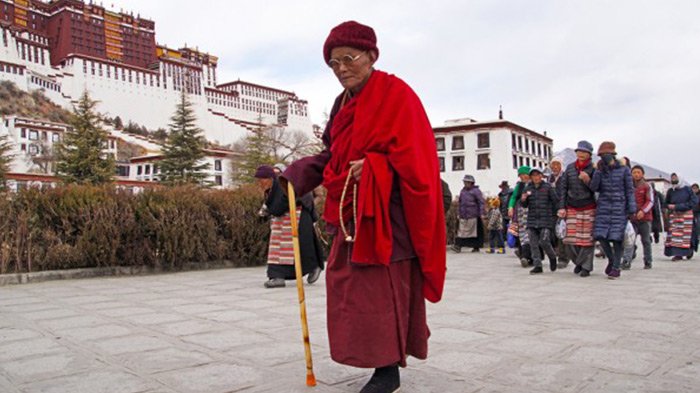 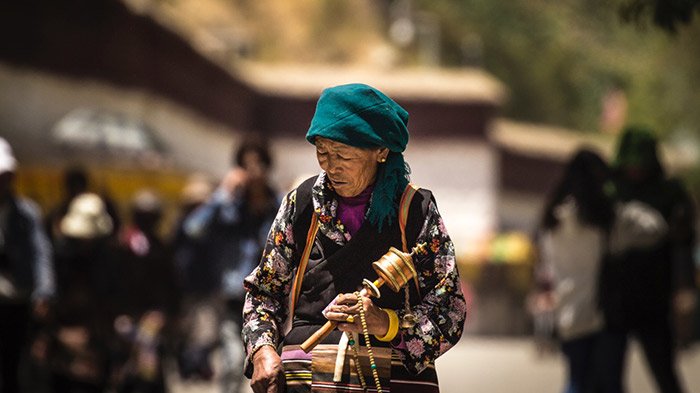 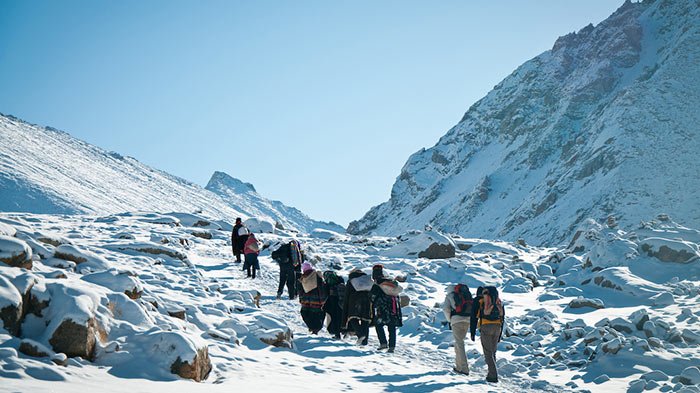 Non-pilgrims are also willing to join the Kailash kora trek 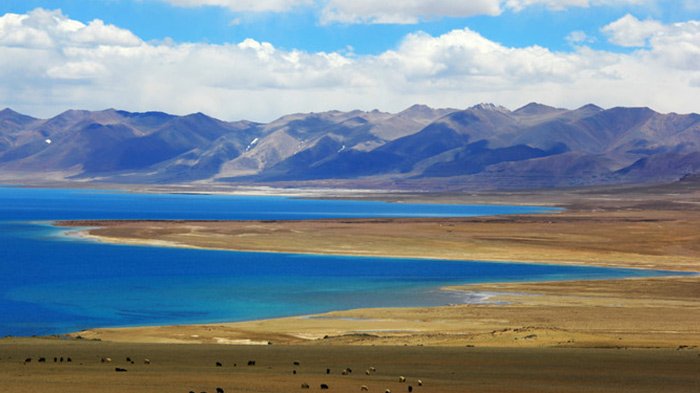 0 Comment ON "Top 8 Kora Routes in Tibet: where to experience the best Tibetan pilgrimage"