The Gelugpa monasteries are the new schools preaching Tibetan Buddhism. It was established by the Tibetan philosopher and religious leader Je Tsongkhapa. In the seventeenth century, this school of Tibetan Buddhism became extremely powerful. However, its power declined when China took control over Tibet in the 1950s. The history of the Gelugpa monasteries is very interesting. Je Tsongkhapa (1357-1419), had studied with local Sakya Lama at a very young age. To increase his educational value, he traveled to the regions of central Tibet, where there were some great monasteries and teachers present. 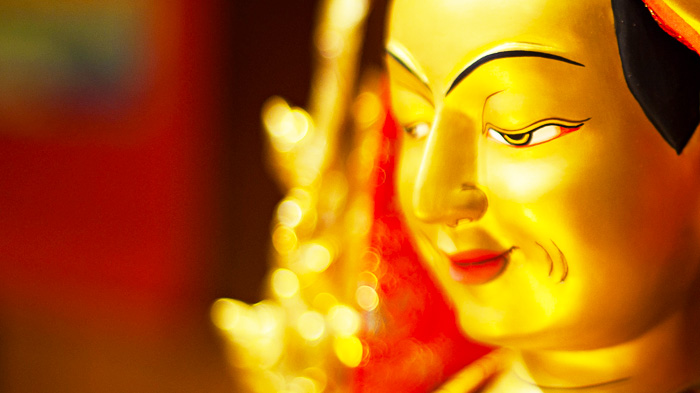 However educational life for him was almost like the life of a vagabond. He visited different places, learning new aspects of education each time. For example he learned about Tibetan medicine in Kagyu monasteries. He was greatly influenced by the Madhyamika teachings of Nagarjuna. Later he combined all these educational lessons and formed a new approach towards Buddhism. These approaches are penned down in two of his books named- Great Exposition of the Stages of the Path and Great Exposition of the Secret Mantra. There are 18 volumes in total where his other teachings are enumerated.

In his adult life, Tsongkhapa visited throughout Tibet, gathering students and teaching them. His admirers founded the Ganden monastery near Lhasa. Tsongkhapa lived there for a short time and died there. Tsongkhapa and his students were always known as the disciple of the Sakya sect of Buddhism. However, it is during his later period of life that his students gathered together and built a new school based totally on his new approach towards Buddhism. This school came to be known as the Gelugpa which means ‘virtuous tradition.’ Later there were several famous disciples of these Gelugpa sects of teachings, most renowned of whom was the Dalai Lama.

The most famous Gelugpa monasteries in Tibet are six in number. They add inevitably to the Tibetan charm and beauty.

The Ganden monastery was founded by the disciples Tsongkhapa, during the later period of his life. When excessive travel started affecting his health, his students had built this monastery near Lhasa. Ganden means ‘joyful’. Indeed Tsongkhapa led a peaceful life although he could not enjoy the monastery for a greater time. He died here. 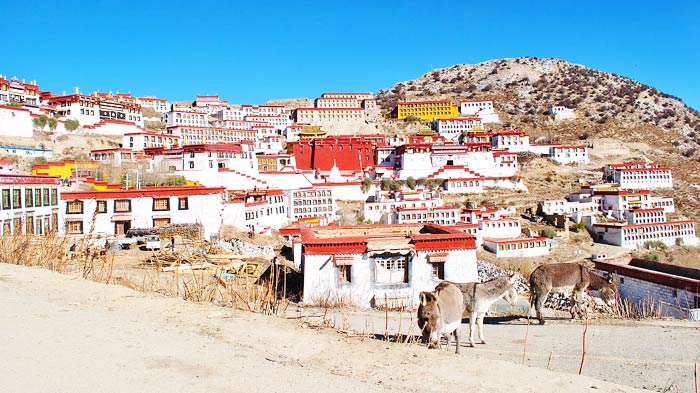 Ganden monastery stands at an altitude of 3,800m above the sea level. However despite its high altitude, the trip is comfortable for families, kids and all types of people. It is located about 29 miles from Lhasa. It is advisable to form a small group with a fixed departure time from the monastery. A beautiful view of the monastery can be obtained in Summer, Spring and Autumn. The kora route around this monastery provides a remarkable scenic beauty that allures the travelers all the more. This route is considered to be the chief attraction of the place. Further its location over the Wangbur mountain, helps in the beautiful mountainous scenic beauty.

Inside the monastery, the chief attraction is the Main Assembly Hall or the Coquen Hall. Serdung, containing the tomb of Tsongkhapa is also an important visual site. There are several other big prayer halls also,which draw the tourists’ attention. Also Tsokchen Assembly hall and Ngam Cho Khang chapel, where Tsongkhapa taught are visual attractions. The view of the innumerable butter-lamps burning in reverence of Buddha and their departed teacher or Tripa is mesmerizing. Each time a teacher died, a pagoda was covered in silver. Later Dalai Lama turned all of them in gold. The 95 holy stupas, the well-preserved cultural relics and other art works are the chief sources of attraction.

The festivals that are extremely interesting Tibet and which should not be missed are Chotrul Duchen, Galdan Namchot, and Ganden Thangka festival. Chotrul Duchen is the festival where the butter-lamps in the various shapes are built to show reverence to the four lives of Buddha. It takes place in Ganded Monastery. Galdan Namchot is celebrated to commemorate the birth and Buddha hood of Tsongkhapa. Ganden Thangka Festival is also a very important festival. In this festive time, thousands of people gather around the ruins of the monastery, to get a view of the Buddha statue. They pray, get blessed and later try to get closer to a huge thangka displayed.

Drepung monastery is also an intriguing monastery in Tibet. It is located at the foot of Mount Gephel. It is the largest monastery in Tibet and is one of the three ‘great monasteries’, along with Ganden and Sera. It is located 5km from the western suburban area of Lhasa. This monastery had been founded by Tashi Palden, one of the disciples of Tsongkhapa. It was the principle monastery of the Gelugpa school of Buddhist teachings. It has a very high quality of education along with well-educated teachers and lots of facilities. Often it is referred to as the ‘Nalanda’ of Tibet because of its high quality academic performances. 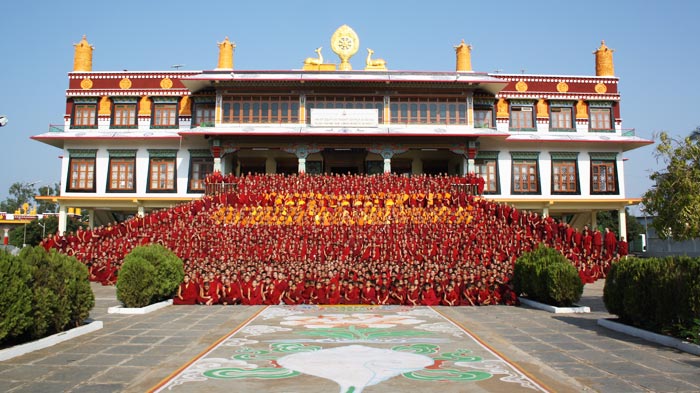 The best time to visit Drepung monastery is during the Shoton (yoghurt) festival. This festival takes place from April to June. It is accompanied by several ethnic songs and dances. Shoton in Tibetan means ‘sour milk banquet’. During this festival a great Buddha painting is unfolded in the monastery, where the pilgrims and other people pray and get blessed. Thousands of Lamas carry the giant Thangka early in the morning and Tibetans dress in total ethnic. Tibetan opera is performed at the Norbulingka palace also. This festival therefore is also known as ‘Buddha Exhibition festival’ or ‘ Tibetan Opera festival’ . Wonderful yak racings take place during this festival. Horsemanship is also displayed. This festival therefore is a spectacular view in the tourism.

Sera monastery is amongst the ‘three great’ monasteries of Tibet along with Drepung and Ganden monasteries. It is located somewhat 2.01km from Lhasa. It is surrounded by beautiful wild roses in bloom, from where it gets its name. The monastery has been founded by Jamchen Chojey Sakya Yeshe of Zel Gungtang (1355–1435). 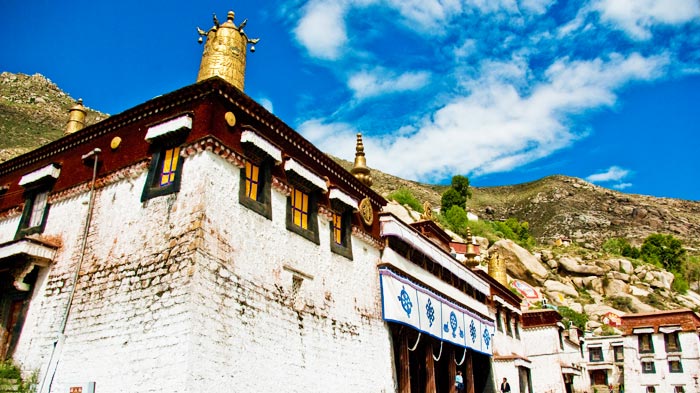 The structure of Sera monastery is very complex. It contains a big assembly hall and other places of worship. It contains 19 hermitages, including four nunneries, all of which are located at the foothills of Lhasa. There are three colleges associated with the structure, known as the Zhacangs. There are also dormitories known as Kamcun. The Sera monastery takes an active part in the Shoton festival. Therefore the best time to travel to this university is from April to June when this festival takes place. Except for this festival, there is the Sera Bengqin festival. It is celebrated every year during the month of December, on the Tibetan calendar. It includes the showcase of Dalai Lama praying to Buddha to get his blessings and also the Ngaba Zhacang placing the pestle in the monks. This festival too, is a spectacular festival that attracts tourist attention.

Tashi Lhunpo monastery had been founded by the first Dalai Lama of Tibet, Gedun Drub in 1447. This monastery is very important both culturally and aesthetically. It is situated in Shigatse. Though it has been founded by the first Dalai Lama, its expansion had been made by the first Panchen Lama. It is one of the biggest monasteries in Tibet located at the foot of Drolmari. The white walls and the golden tops of the monastery are remarkable features. It contains the biggest statue of Maitreya Buddha, sitting. The figure is decorated with gold, diamond, pearl and all other types of jewelry. 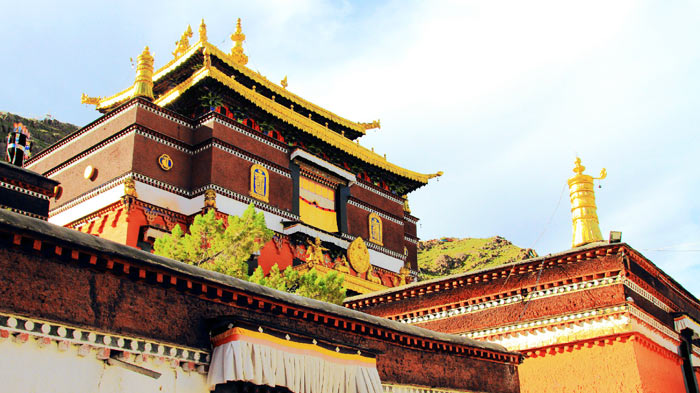 The famous festivals here are the Tibetan New Year Festival and the Dancing Deity Festival. The greatest festival in this monastery is the Buddha unfolding festival. On the fifth month of the Tibetan calendar each year, a giant painting of Buddha is unfolded ceremoniously in this monastery. At first the colossal Thangka painting of Amitabha (the Buddha of infinite light) is unfolded. It is followed by the unfolding of Sakyamuni(the founder of Buddhism) and Champa Buddha (the Buddha of the future). The monastery also provides provisions for pilgrimage and tourists interested in art and architecture. 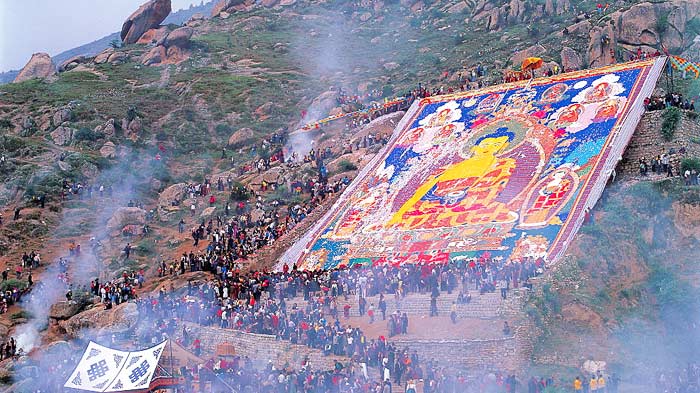 Another interesting festival that draws tourists’ attention is the kora ceremony around this monastery. Innumerable pilgrims gather around this monastery to indulge themselves in the kora route. It takes about one hour to complete kora around Tashilhunpo monastery. The pilgrims, starting from the main gate, walk clockwise, looking for an alley towards the right. While doing this, they chant their holy incantations. Often flags are placed as the holy emblems, around this place. The best time to visit the monastery is during these festivals which usually take place in the months of February and March.

The Ta’er monastery is a very famous monastery located in the Qinghai province of the Tibet in China. It is a wonderful architectural complex and is one of the main sources propagating the Gelugpa sect of Tibetan Buddhism. It contains about 9,300 structures within it, including the prayer hall, the scripture halls, Lama’s residence and others. The ridges of the grooves of the roof are decorated very nicely with authentic aspects like the gold deer and the treasure bottles. The monastery itself is a visual delight. 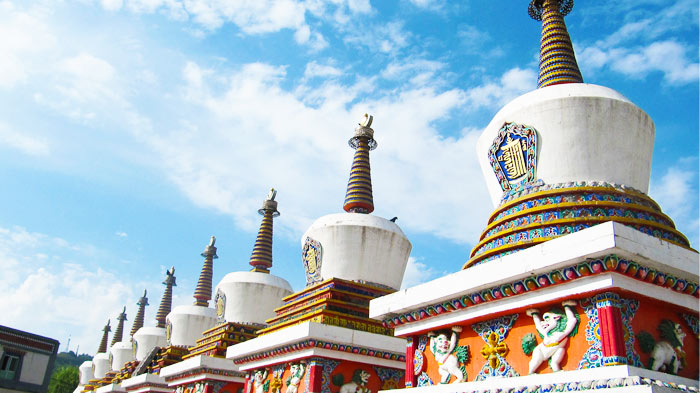 The festivals associated with Ta’er Monastery are the Prayer Wheel festival, the Lamp festival, Shoton festival and others. Likewise, this monastery is open for visit for all the seasons, particularly the summer and autumn seasons.

Labrang monastery is also a very famous tourist attraction in Tibet. It is considered to be one of the six big monasteries of Tibet. Like the other monasteries, this monastery also propagates the Gelugpa sect of Buddhism, advocated by Tsongkhapa. It is situated in the Xiahe , in the traditional Amdo region and is accessible by car. It is chiefly located on the Daxia River. The Labrang monastery was founded by Jamyang Shêpa, Ngawang Tsondru. It has eventually become the home of thousands of monks of Tibet. The architectural feature of this monastery is one of the many attractive features. Its roof includes a beautiful blend of the Tibetan and Indian Vihara architectural style. 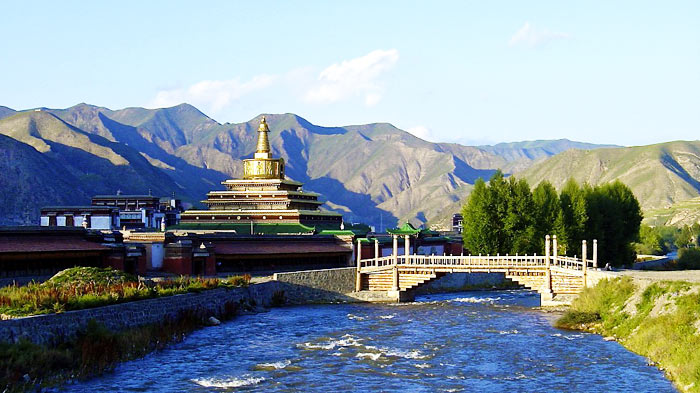 The Golden Stupa at Labrang Monastery during the summer time 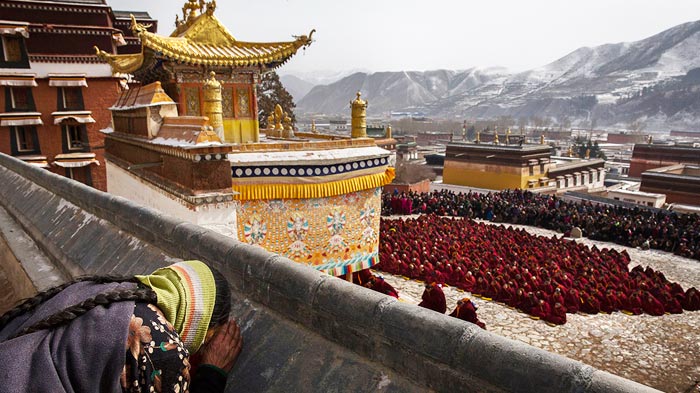 Every year, the monks, ascend to the highest peaks to offer reverence to Buddha and seek his blessings.

The Labrang monastery is covered with burning incenses all the year. Moreover important festivals like the Tibetan New Year festival, ‘free captive animals’, ‘show Buddha statue’ festivals are some minor parts of the festival. The most important festival is the Labrang Thangka festival. Every year, the monks, ascend to the highest peaks to offer reverence to Buddha and seek his blessings. Then a huge Thangka is carried which the people want to touch to have a blessed life ahead. The favourable months therefore for visiting Labrang monastery is the months of February and March and June as the festivals can be witnessed properly during this time.

These monasteries in Tibet have their certain rules and regulations. Even though they appear solemn and good, the breaking of rules might bring about hard punishments. Therefore nobody should try to jeopardize the rules associated with these monasteries. Further a consult with the local tour guides will help to acquaint the tourists with proper materials required to visit the monasteries. Also the entry in the monasteries and therefore in the different Tibetan festivals should be sought with the help of these tour guides or local people.