Tibetan rivers are known for their purity and minerals. They are known as the water tower of Asia. They flow into some of the densely populated countries in Asia: India, China, Bangladesh, Burma, Nepal, Bhutan and many other Southeast Asian countries. The source of the water is mostly underground waters and glaciers. Apart from the geographical importance, Tibetan water bodies are known for one more thing: timeless beauty. The colors that get reflected in the water are like no other since Tibet is literally top of the world. The reflective hues from the sky and sun are a sight to behold. Tibetan rivers are not just a pretty sight; they have a lot of potential for hydroelectric power. The freshwater rivers are one of the most important natural resources for the Tibetans. Let's see some significant facts about some of the most important rivers rising in Tibet.

Yarlung Tsangpo also known as Yalu Zangbu or Yarlung Zangbo is the longest river in Tibet and highest river in the world. It stretches for about 2, 900km. It originates from the Angsi glacier in Western Tibet and runs through to Eastern Tibet. Four major tributaries within Tibet are Lhasa River, Nyang River, Raka Tsangpo River, and Parlung River. While looking at the scenery alongside the river, they shift from cold desert to arid steppes to deciduous vegetation; flora ranging from evergreen coniferous trees to flowering rhododendron plants. Yarlung Tsangpo is famously nicknamed as the ‘ Everest of Rivers’ because of the extreme and challenging conditions of the river. This river is a favorite destination for adventure junkies to white water raft and kayak. 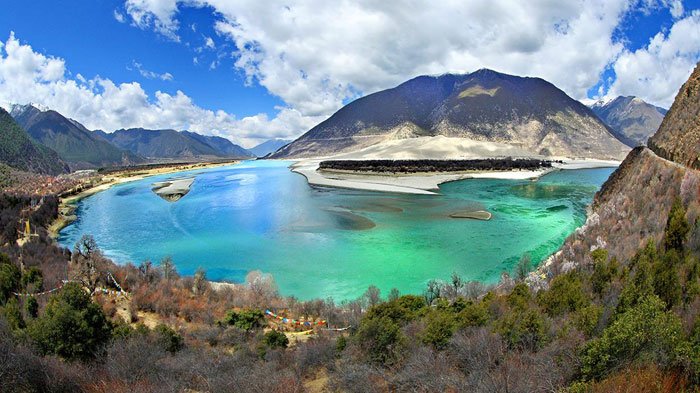 Another beauty that has to be mentioned is the Yarlung Tsangpo Grand Canyon. In the eastern side, the Tsangpo soars up into the 4,900m cleft between two snow caps: Namche Barwa and Gyala Peri. The average depth of the canyon is 2, 268m. It is the deepest canyon in the world. There are also two waterfalls: Rainbow falls and Hidden Falls. The Yarlung Tsangpo is also known for its abrupt twists and turns. It flows all the way across to west and takes an abrupt turn and flows west into India, where it is called Bhramaputra River. It again takes a turn towards the south into the mouth of Bangladesh where it is called Jamuna River. 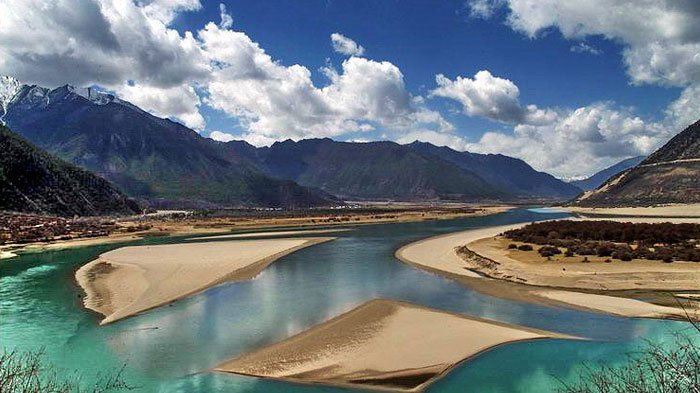 Yellow river known as Ma Chu in Tibet and Huang He in China originates in Qinghai Province in Tibetan plateau and flows through into China. This river is known as the ‘Cradle of Chinese Civilisation’. At a length of 5, 464km, it is the second longest river in Asia and the sixth longest river system in the world. The yellow river is pristine in the headwaters but gets incredibly polluted by the time it works its way towards central and eastern China. It is called the yellow river because of the large amounts of loess sediments that change the color of the water. Yellow River was one of the most prosperous rivers in Chinese history but also a cause for devastating floods and thus earning the name: River of Sorrows. The river is slow and sluggish along most of its course. Every year, more than 1.5 billion tons of soil flow into the river and more than half settled in the river beds causing the river to rise. 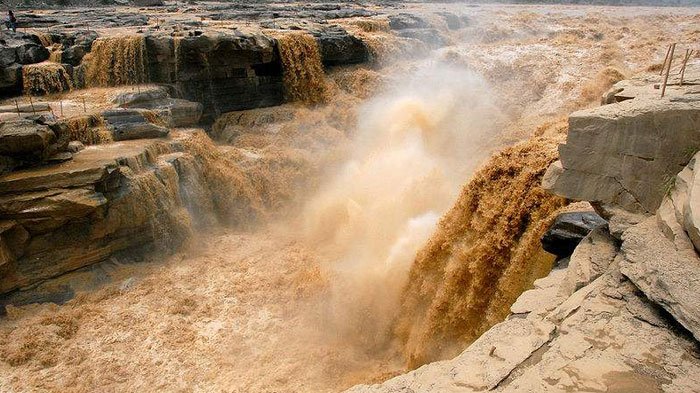 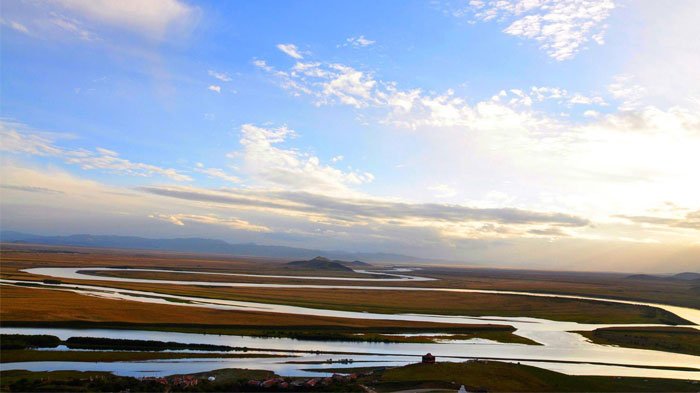 Lancang River, also known as Mekong River is the soul of Southeast Asia. Head watering from the Qinghai province of Tibet it flows through Yunnan Province in China, Myanmar, Laos, Thailand, Cambodia, and Vietnam. It outflows into the South China Sea. With an estimated length of 4, 350km it is the 7th longest river in Asia and 12th longest river in the world. This river is a major trade route between China and Southeast Asia. This river supports the most diverse fisheries, second only to Amazon River in Brazil. There are over 1, 700 varieties of fish. About 60 million people depend on the Lancang River. Cambodia is highly dependent on Lancang for their survival. 80% intake of proteins in the diet for the Cambodians is derived from the fishes in Lancang. Vietnamese use 50% of their water from Lancang for their irrigation. 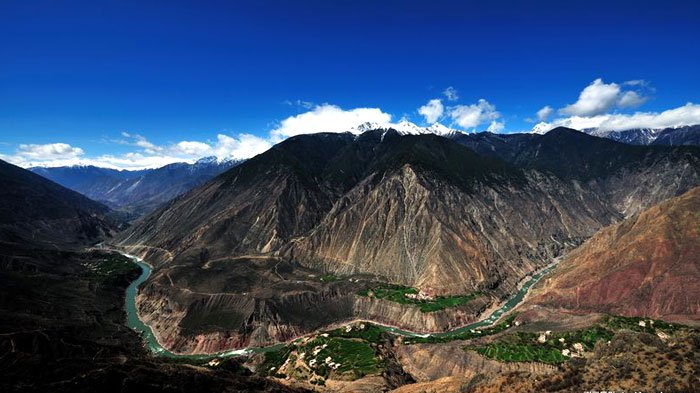 This river provides livelihood to a lot of people but at the same, it takes away the lives of many because of its monstrous power. In some regions people call it ‘ the Mighty Mekong.’ In fact, Lancang River translates to the turbulent river. This river is truly a unifier as it houses ethnic groups from six different countries. There are as much as 100 ethnic groups living along the lower basin alone. There are various options to cruise along this diverse beauty ranging from luxury cruises to local boats with an amalgamation of activities like kayaking, fishing, biking etc. The tours last between 1- 5 days. 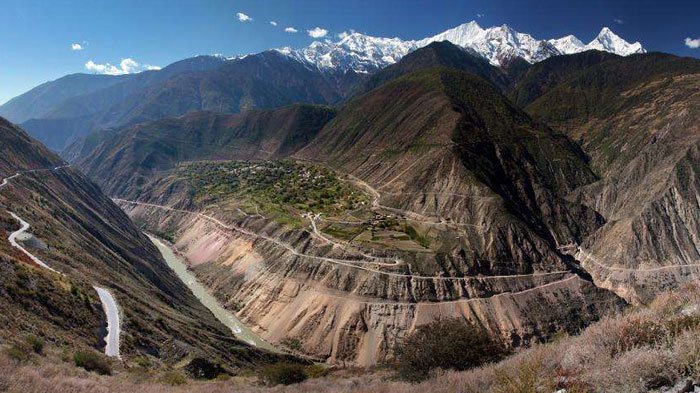 Nu River---one of the largest rivers in Southeast Asia

Originating from Nagqu River in Tangula Mountain in Tibet, Nu River also is popularly known as Salween River is one the Three Parallel Rivers protected by UNESCO World Heritage(the other two being Mekong and Yangtze.) The three parallel rivers are the epicenter of biodiversity in China. It starts in Central Tibet and flows south through Myanmar and Thailand before flowing into the Andaman Sea. The total length of the river is 3, 060km long. This river is known as the ‘Grand Canyon of the East’ because of the spectacular scenery it offers along its course. 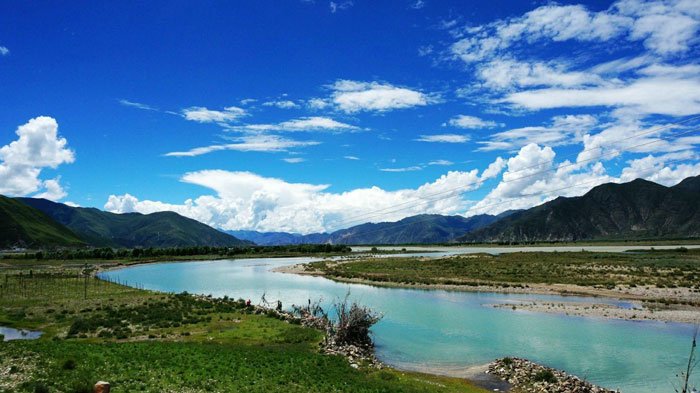 About six million people depend on the water, nutrition-rich diet, and livelihood from Nu River. Nu is the home to 143 fish species. 47 of the 143 species can be found only here. Some of the extinct and close to extinction species like The Golden Eye Monkey, Small Panda, Wild Donkey of Dulong and Wild Ox still flourish in this basin. This river has more than 10 tributaries. Like Lancang River the cultural diversity in this river watershed is ethnically diverse and culturally rich. Nu is one of the last undammed rivers in Asia, but it seems like it won’t be so for long. 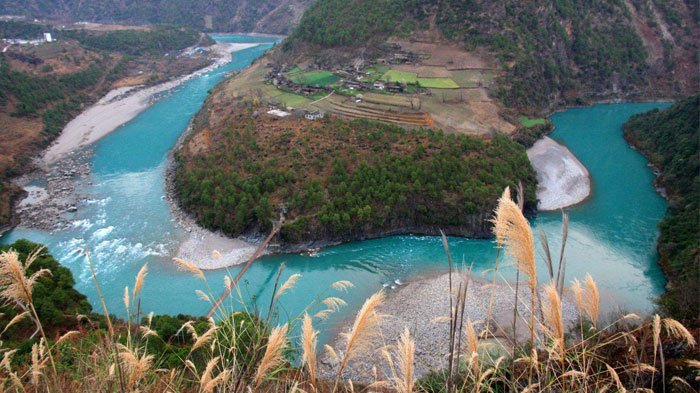 Indus River--- a legendary river only next to Ganges

The Indus River originates in the vicinity of Mount Kailash and the Mansarover Lake in the Tibetan plateau. With a length of 3,180km, it is one of the longest in Asia. The main water source is the glaciers of Himalayas. It is said that India derived her name from River Indus. River Indus is said to have been two greatest civilisations of history: Harappa and Mohenja Daro. It runs its course through China, India and Pakistan. The country which gets major benefit out of it is Pakistan (95% of river runs its course in Pakistan.) Indus River too discharges into Arabian Sea. Indus has more 15 tributaries. It is the backbone of food and agriculture for Pakistan and Punjab, India. 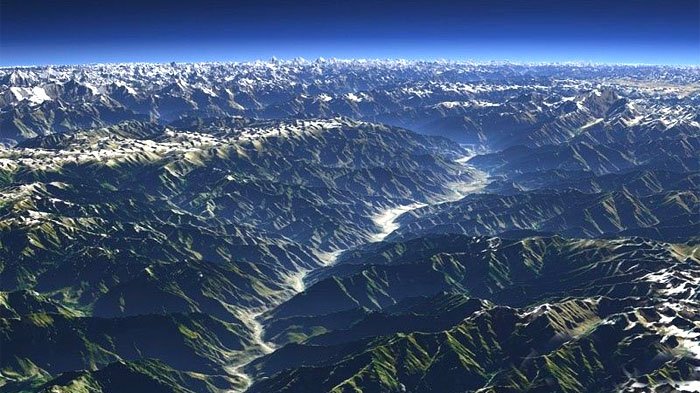 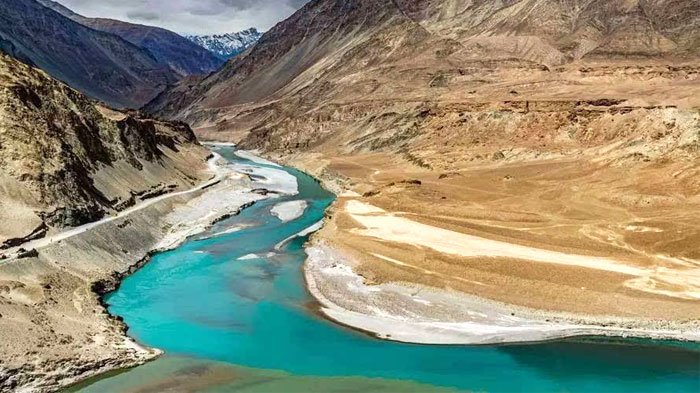 These are just some of the rivers originating from Tibet. These rivers are of great value to people of many countries. The rivers are pristine and clean in the source, but as it flows down thousands of kilometers they become polluted by civilization, industries. The building of dams also affects the rivers greatly. The melting of ice caps due to global warming is also affecting the rivers majorly. In spite of all these Tibet manages to maintain its beauty.