The Potala Palace, at an altitude of 3,756.5 meters above sea level, occupies an area of over 360,000 square meters (about 32 acres), measuring 360 meters from east to west and 270 meters from south to north. It has 13 stories and is 117 meters high. The walls of the Palace are over one meter in thickness, the thickest sections being five meters. They are painted with huge colorful murals, which make it beautiful and lively.

The stone-and-wood-structured Potala Palace consists of over 1000 rooms, seminary, chanting hal1, temples, various chambers for worshipping Buddha and chambers housing the stupas of several Dalai Lamas, which are covered with gold 1eaf and studded with jewels. Mural art is an essential part of the architecture in the Potala. Each room, no matter how small it is, is stippled with colorful, vivid murals. Along the painted second-floor corridor, there are 698 most extraordinary murals, which depict Buddhist legends stories and scenery, mythical customs, and stories of ancient Tibet.

To visit this world wonder, a good plan is badly necessary for you might fail to get a ticket or be unable to visit all the rooms and halls within the required time. Therefore, be patient to read the following tips for visiting Potala Palace:

1. Opening Hours: 9:00 to 16:00 (Except for holidays or festivals, or the day when there are grand religious ceremonies held in the palace).
2. Ticket for the Potala Palace: RMB 100 per person in slack season (from December 1st to April the 30th next year); RMB 200 per person in peak seasons (from May 1st to October 31st).

3. There is Security Check at the entrance.
4. The Potala Palace travel route:

5. Pay attention to the Buddhism traditions: Since the Potala Palace was built for religious use, there are some religious taboos in the palace. For example, it is forbidden for tourists to wear a hat or take pictures inside the palace, or step on thresholds in the palace.
6. Tourists are not allowed to stay in the palace. All visitors should finish their visiting within one hour.
7. The palace is located on the mountainside, and it is relatively cold inside. You'd better take an extra coat with you and walk slowly during your visit. 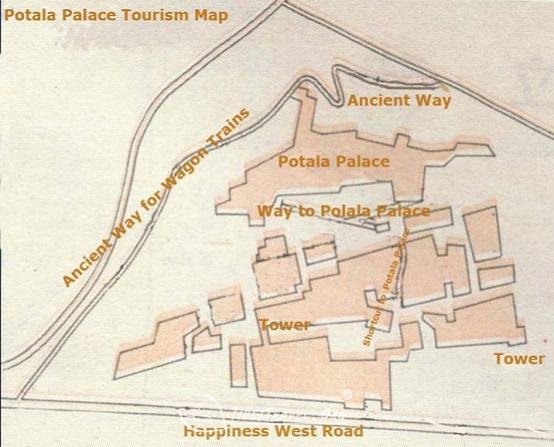 8. You can take photos with the overview of the Potala Palace on the Chakpori Hill to the southwest of the palace. You can easily reach the hill if you leave the palace from its west gate, and go along the path to its main entrance. It takes you 1 or 2 Yuan to take photos on the hill.
9. Ticket Reservation: The Potala Palace sells only 2300 tickets a day. In peak seasons, you need to book the ticket at the West Gate of the palace one day earlier, and arrive at the palace twenty minutes earlier than the time on the ticket the next day.

0 Comment ON "Tips for Visiting Potala Palace in Lhasa"