Direct train to Lhasa is not your only way to Tibet 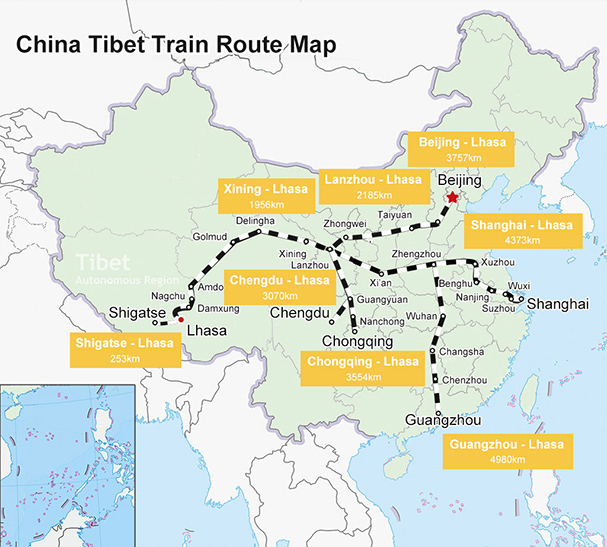 In fact, tourists can have many options to Lhasa by using both flight and train.

As it is a long journey to Lhasa by train from Beijing, Chengdu, Shanghai and Guangzhou, choosing a seat ticket of direct train to Lhasa might make the trip uncomfortable, even extremely tired. So sleeper berths of the trains starting from the above cities are usually in short supply. While it is relatively easier to get a sleeper train ticket in Xining/Lanzhou which is the last stop for some travelers. Tourists are enjoying the view outside the Qinghai-Tibet train.

Even if you cannot get a sleeper ticket there, it is not bad to purchase a seat ticket as it is a relatively shorter train journey. Most importantly, you will not miss the scenery along the world’s highest railway. Besides, if you make a stopover in Xining, you can spend one or two days there and view the beautiful Qinghai Lake, Taer Monasteries, etc., and then take the train to Lhasa.

Qinghai Lake is one of the major attractions in Xining.

Of course, you can also fly to Lhasa directly and then take a train out of Lhasa after visiting Tibet. There are over 20 flights to Lhasa during the peak season of Tibet. Tourists can fly to Lhasa directly from major cities of China, like Beijing, Shanghai, Guangzhou, Chongqing, Chengdu, Xining, Xi'an, Kunming and Zhongdian.  However, to minimize the possible altitutde sickness tourists may suffer, it is advisable to take train to Lhasa and fly out.