Drive to Tibet: what are the top 5 overland routes to Tibet?

Can you drive to Tibet? The answer is definitely yes. Currently, there are five major routes to drive to Tibet. Driving to Tibet is one of the most thrilling adventures in China, and there is nothing like the exciting drive across the Tibetan plateau to Lhasa to get your adventurous nature flowing.

While there are five different routes to take to Lhasa from mainland China, the Sichuan Tibet Highway route from Chengdu to Lhasa and the overland trip from Kathmandu to Lhasa are the most popular for international tourists. However, the drive from Kunming in Yunnan Province to Lhasa, which follows the Sichuan Tibet Highway for part of its course, is another great route to take from southwest China.

Few international tourists head all the way to the Xinjiang Uyghur Autonomous Prefecture to the north of Tibet, and the journey along the Qinghai Tibet Highway has been overtaken by the trains from Xining to Lhasa. Check the guide below to find the best overland route that fits you best.

Drive from Kathmandu to Lhasa - Epic Ride across Himalayas

One of the most popular overland trips to Lhasa, the route from Kathmandu to Lhasa is an epic adventure that takes you across the mighty Himalayas to the world’s highest capital city, Lhasa. The route takes you from Kathmandu (1,400m) the exotic capital of Nepal, up to the border between Nepal and China, at Rasuwa Gadhi. 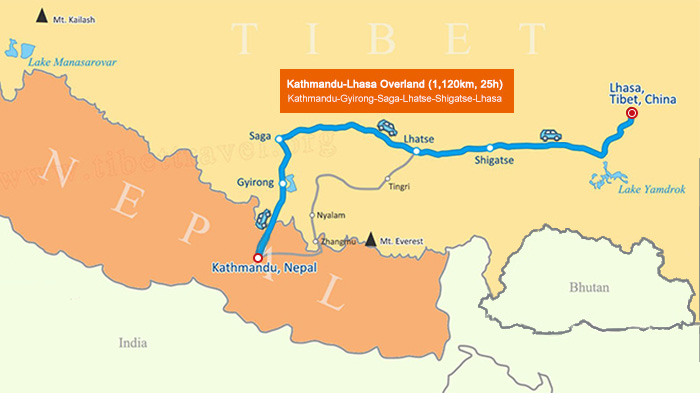 Kathmandu to Lhasa by road Map

Once you cross the border to Gyirong Port on the Chinese side, you will travel to Gyirong town (2,700m), close by, and then on to the stunning Everest Base Camp (5,150m) to get a great view of the world’s highest mountain. From EBC, you will travel to Shigatse (3,800m), the second city of Tibet, and visit the Tashilhunpo Monastery, before heading on to Gyantse (4,000m) for the spectacular Kumbum Stupa. From there, it is a short ride to Lake Yamdrok (4,441m), and on to Lhasa (3,656m). 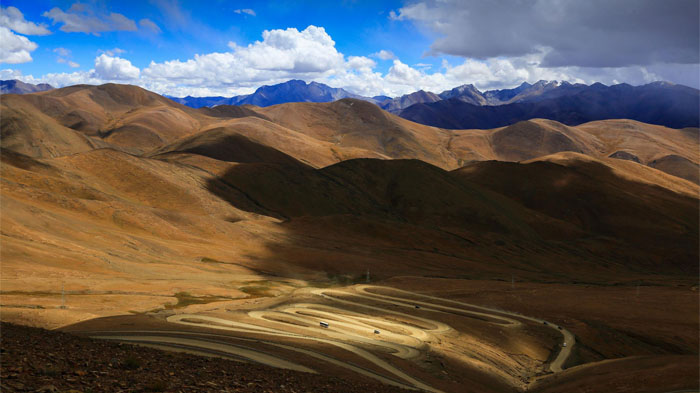 A distance of around 1,076 kilometers, the trip normally takes around 7-8 days, and is best done from April to October, as the winter months can mean a lot of snow in the high Himalayas, making travel harder. The pinnacle of this epic journey is the side-trip to Mount Everest Base Camp, where you can get as close as it is possible to be to the world’s highest mountain, and take photos of the summit. As well as the base camp, you will get to visit the Tashilhunpo Monastery, the seat of the Panchen Lama, and the stunning Gyantse Kumbum Stupa, a 32-meter stupa that is the only one of its kind in Tibet. And the journey ends with a tour of the capital city, with tours of the Potala Palace and the Jokhang Temple, the most spectacular sights in Lhasa.

The main overland route from mainland China to Lhasa, the Sichuan Tibet Highway runs from Chengdu in Sichuan Province to the Tibetan capital, and is a road that runs for 2,038 kilometers across the western Sichuan Basin, into the Hengduan Mountains, and up through Nyingchi to Lhasa. The route follows the G318 National Highway from Chengdu, heading through Ya’an to Kangding and Xinduqiao, and on through Markam and Bome to Nyingchi, and then to Lhasa.

Chengdu to Lhasa by road Map

Chengdu lies at an altitude of around 450 meters above sea level, making the trip an ascent of more than 3,000 meters to get to Lhasa, at 3,656 meters above sea level. The entire route would take around 44 hours to drive, if driving continuously, but for travelers making the trip to Lhasa on a tour, it can take around 12 days to make the journey, stopping at the various attractions along the way. 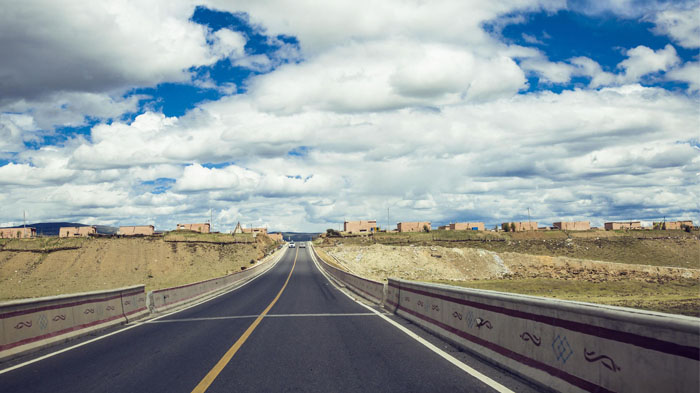 The legendary G318 National Highway is filled with incredible natural wonders along the way.

For a trip of this magnitude, you will need to have a driver and guide, as you will be driving into the Tibet Autonomous Region, where independent travel is not allowed. You will also need to have certain documents with you before you leave, including the Tibet Travel Permit, the Aliens Travel Permit, and the Restricted Areas Permit, as you will be passing through areas that the Tibet Travel permit alone does not cover.

Drive from Kashgar to Lhasa - Most Mysterious Ride to Tibet

The drive from Kashgar in the Xinjiang Uyghur Autonomous Prefecture to the north of Tibet is rated as being the ultimate on overland adventures. The route you take crosses high mountains, vast prairies, and a huge desert, where driving is considered to be very dangerous if you are not experienced in the roads. The route covers a huge 2,755 kilometers, and would take 60 hours to drive continuously. As with most of the roads into Tibet, you will need the Tibet Travel Permit, as well as the Alien’s Travel Permit, the Restricted Areas Permit, and the Frontier Pass. 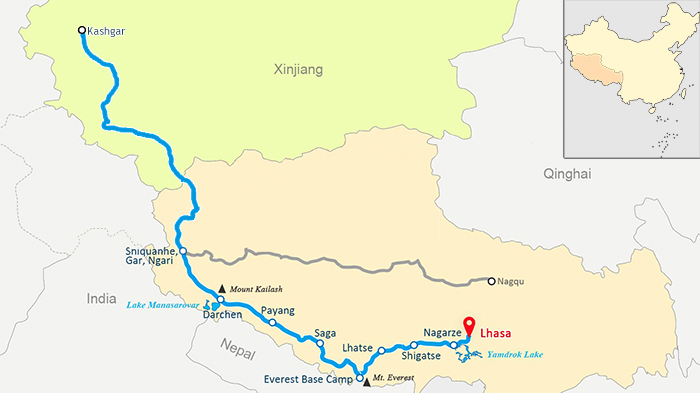 Kashgar to Lhasa by road Map

Known as the highest road in the world, the road from Kashgar reaches altitudes of more than 5,000 meters in places, and the road condition is not the best, with many sections of the road not having been repaired for the last 50 years. However, the route passes through some of the most outstanding landscapes in China, climbing over ice-covered mountains, past immense Himalayan glaciers, and with an average elevation of around 4,500 meters along its entire length. 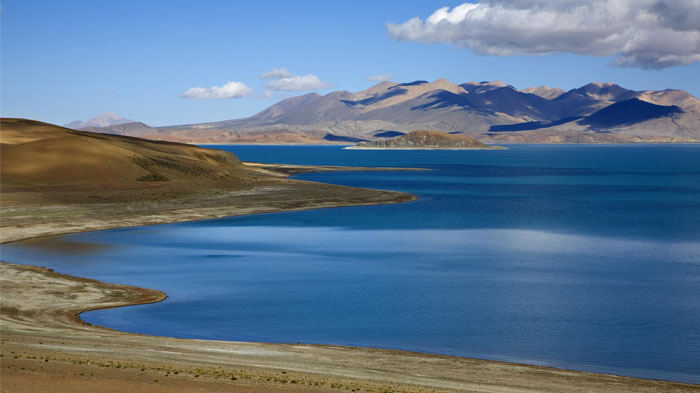 One of the most astounding sights along the route is that of the sacred Mount Kailash, the world’s most sacred mountain, which lies in northern Ngari Prefecture in western Tibet. Sacred in four religions, this unusual black mountain has never been climbed, and never will be due to its religious significance. The route from Kashgar takes you through Ritu County and Shiquanhe River Town and along the G219 past Mount Kailash and through Zhongba, and Saga, before joining the G318 heading east at Lhatse. From there is heads to Shigatse and eventually to the capital of Lhasa. - Find out how to travel from Lhasa to Kashgar in different ways.

Drive from Xining to Lhasa - Best Road Condition to Tibet

Of all the routes to get to Tibet, the Qinghai Tibet Highway is the shortest at just 1,956 kilometers from Xining to Lhasa. It is also the most famous, as it is the route that the trains to Tibet follow, with the Qinghai Tibet Railway running almost parallel to the road. The first road from mainland China to Tibet, it has an average altitude of around 4,000 meters. The road starts in Xining and passes through Golmud (2,809m), up to the Kunlun Mountain Pass (4,772m), through the Fenghuoshan Mountain Pass (5,010m) and the Tanggula Mountain Pass (5,231m), on into Nagqu (4,526m) and across the vast Changtang Grasslands (4,500m) to Damxung County (4,200m), and then on down past Yangpachen (4,300m) to the Tibetan Capital. 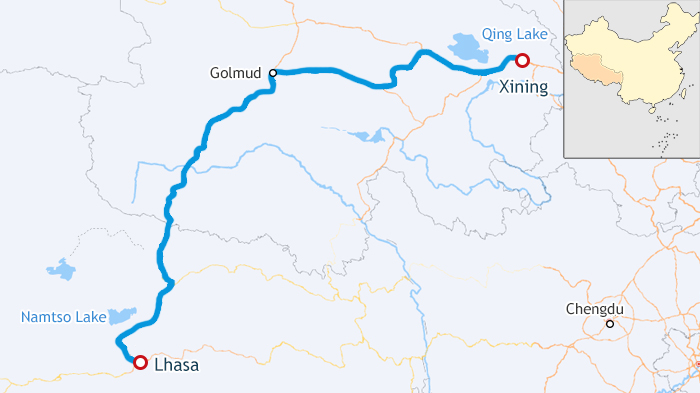 Drive from Xining to Lhasa Map 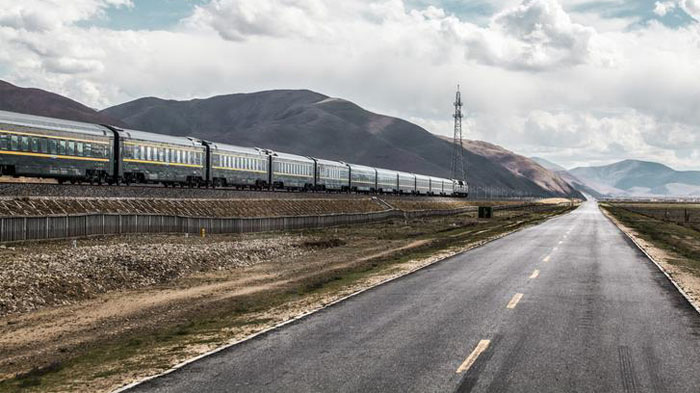 The entire route would normally take around 35 hours of continuous driving, but is best done over the course of around 5-6 days. You will need to have a driver and guide with you, as well as the Tibet Travel Permit, Alien’s Travel Permit, and Restricted Areas Permit (for Nagqu). Independent travel is still restricted, even along this famous route. You will also pass some of the most stunning sights along the route, including the Qinghai Lake, the largest lake in China; Lake Namtso, which lies on the other side of the Nyenchen Tanglha Mountains from the road; and the Changtang Grasslands, which stretch for miles across northern Tibet and are the home of dozens of different species of wild animals.

Drive from Kunming to Lhasa - Most Exotic Ride to Tibet

The drive from Kunming in Yunnan Province to Lhasa is an important route that runs up through Yunnan Province to join the G318 Sichuan Tibet Highway at Markam, continuing on to Lhasa. A distance of around 2,225 kilometers, the route normally takes around 44 hours to complete, when driving continuously. However, with the road heading up and down the Hengduan Mountains, reaching altitudes of above 4,000 meters on the stretch from Kunming to Markam, it is best to allow at least 5-7 days completing this immense journey. 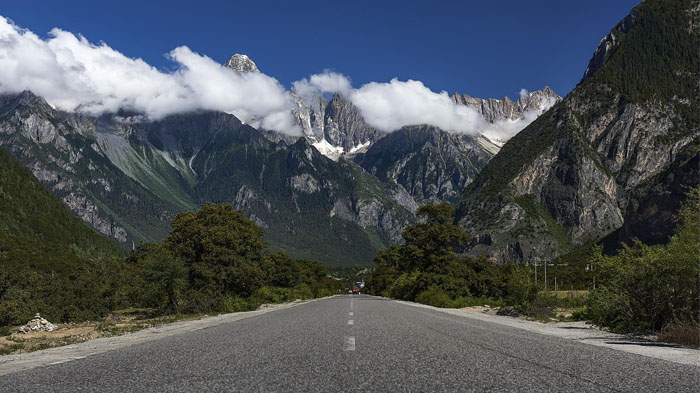 The treacherous highway is flanked by deep gorges and spectacular glaciers and lofty peaks.

Following the route of the G214 National Highway, which runs up through Yunnan Province, the road passes through the small towns of Dali, Lijiang, Deqen, and Yanjing, before joining the Sichuan Tibet Highway at Markam and traveling west through Litang, Bome, and Nyingchi to reach Lhasa.

There are a wealth of attractions along this route through Yunnan, including the stunning Erhai Lake and Cangshan Mountain, the ancient city of the Naxi People near Lijiang, and the famous Tiger Leaping Gorge, which lies on the route of the ancient Tea Horse Road. You will also pass through Shangri-La, the former town of Zhongdian, which was renamed for the mythical city from the novel, Lost Horizons.

The trip is best done in the spring and autumn seasons, as the summer is too wet and can often see landslides, while the winter is too cold and the mountains are often covered with snow, blocking the high passes through the Hengduan Mountain Range. As with all overland travel to Tibet, you will need to have the Tibet Travel Permit, the Alien’s Travel Permit, and the Restricted Areas permit before you enter the Tibet Autonomous Region.

With five different routes to get to Tibet, few people actually use most of the routes, and for most international travelers, only the overland trip from Kathmandu to Lhasa and the Sichuan Tibet Highway are open for use. And for both of these routes, you will need to be on a pre-booked tour of Tibet from China.

0 Comment ON "Drive to Tibet: what are the top 5 overland routes to Tibet?"