From its mighty Himalayan peaks to the pristine clarity of the serene and holy lakes, Tibet has the kind of stunning natural scenery that screams out to be photographed. This stunning scenery, combined with the natural beauty of the region and the magnificence of its thousands of unique cultural and religious sites, makes Tibet the new “in” place to be seen in your wedding photographs. 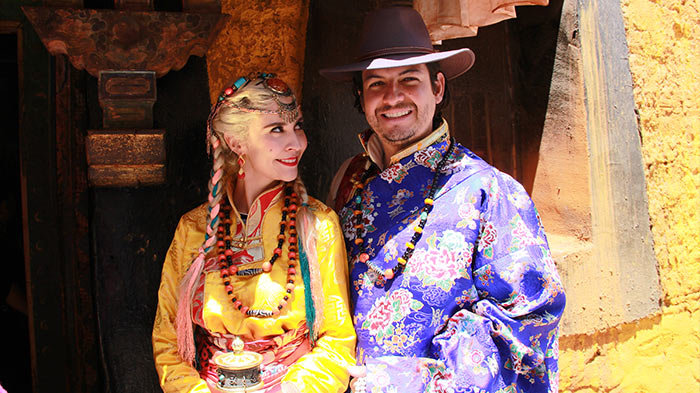 Tibet is the perfect backdrop for taking wedding portraits.

Tibet is the ideal destination for landscape photography, which makes it the perfect backdrop for taking wedding portraits. Every year, more and more newly-wed couples, as well as those who are planning their weddings and want pre-wedding photo sets taken, are taking the long train ride to the roof of the world, to make their wedding photos the envy of all their friends. Tibet offers some of the most memorable and authentic wedding photo-shoot locations in the world, and its majestic mountains, sacred lakes, and spectacular monasteries and temples are fast becoming one of the most popular backgrounds for wedding photography.

The weather is another reason that Tibet has become a haven for wedding photography in recent years. With the exception of the rainy season - which is not very rainy anyway, and not much of a hindrance for taking photos in the region’s capital, Lhasa - most of the year sees clear blue skies and bright, warm sunlight. High up on the Tibetan plateau, this region is dry for most of the year, and with very few clouds during the spring and autumn months. Depending on the time of year, you can have photos taken with backgrounds of everything from semi-frozen lakes and blooming spring flowers, to the dramatic autumn colors of red and gold or the pristine whiteness of a beautiful snow-covered landscape.

While there are thousands of square miles of plateau to choose from, one of the best locations for wedding photographs is the capital city of Tibet, Lhasa. With a plethora of temples, monasteries, and palaces to use as a backdrop, as well as many of the most stunning natural landscapes in the world, Lhasa and the surrounding areas have become the most popular wedding photography destinations in Tibet.

Set on the site of a very ancient fortress from the 7th century, the Potala Palace sits proud on top of Moburi, the Red Hill. Looking down on the city of Lhasa, this beautiful red and white palace was the seat of Tibetan government in the 17th century. The design and architecture of the palace make for a stunning background whether it is from the square in the front of the palace, or from the beautiful Zongjiao Lukang Park behind. 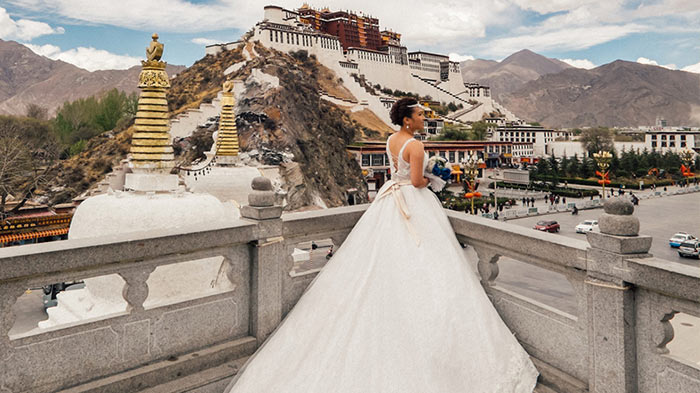 Another favorite place to get the view of Potala Palace in the background of your wedding photos is from Chagpori Hill, a little way to the southwest of the palace. Another sacred hill in the city of Lhasa, Chagpori was once the site of the Chagpori Monastic Medical College, founded in 1696. While much of the original site was destroyed, there are some spectacular pints on the northeast ridge of the hill that afford a beautiful view of the Potala Palace, and make a perfect photograph for the bride and groom.

Part of the most ancient area of the old city of Lhasa, Barkhor Street comprises of four separate roads that encompass the sacred Jokhang Temple. The street is full of color and life, and is one of the symbols of Tibetan tourism in Lhasa. Marked out as the holy kora for the Jokhang Temple, it is lined with shops and stalls set in beautiful, old buildings of white, red and blue, with cobbled roadways that have felt the footsteps and knees of millions upon millions of pilgrims. 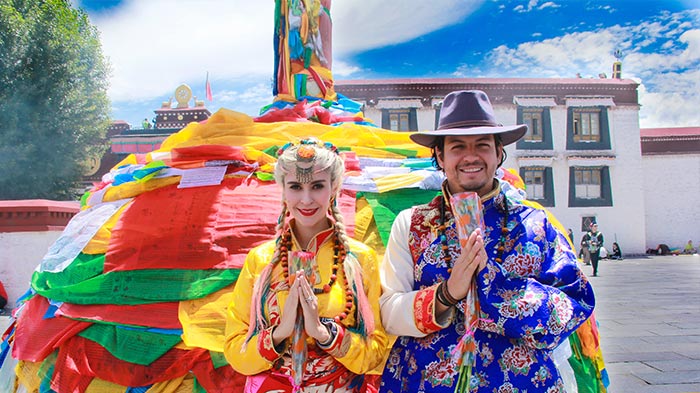 This colorful brocade of buildings sets a delightful background to photos of newlyweds taking their first shopping trip together. And as it is the kora for Jokhang, photos of the couple prostrating themselves before the temple at the start of their upcoming journey in life are an excellent opportunity. Since Lhasa is the main entry point for Tibet, it is the ideal scenery for taking photos with a truly Tibetan background.

Out in the western suburbs of Lhasa sits the palace of Norbulingka. The Tibetan name means “ Treasure Garden” and it could not be apt a description of the Summer Palace of the Dalai Lama. Originally built in the Qing dynasty as somewhere for the 7th Dalai Lama to rest after bathing at the nearby mineral springs for his health, the palace is widely known for its beautiful gardens. Known as the “ Plateau Oxygen Bar&rdquo, it is the world’s highest garden, and is now a public park. 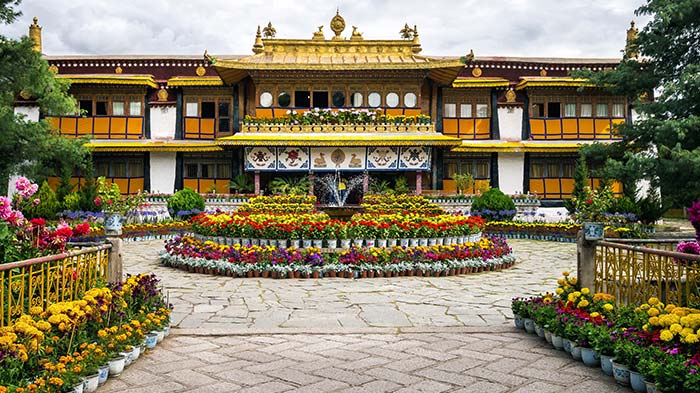 From the moment you step inside, it is as if you are transported to another world, where burbling streams flow gently through immaculately manicured Japanese-styled gardens. Dozens of species of small birds flutter through the branches of the trees that line the hand-crafted stone pathways, and the architecture of the buildings gives a feeling of ancient times in Tibet. The gardens make the perfect scene for wedding photography, with the colorful buildings and beautiful, local and imported flowers.

On the south bank of the Lhasa River, off to the northeast of the city, lies Ganden Monastery. Sitting atop Wangbur Mountain, which vaguely resembles a reclining elephant according to the locals, it is one of the oldest Gelug monasteries in Tibet. The monastery holds major significance in Tibetan Buddhism, as a religious, political, and cultural relic of Tibet, and is one of the Three Great Monasteries of Gelugpa. At its inception ceremony, there were more than 8,000 Buddhist lamas present in the monastery, and at its peak, held a population of around 5,000. 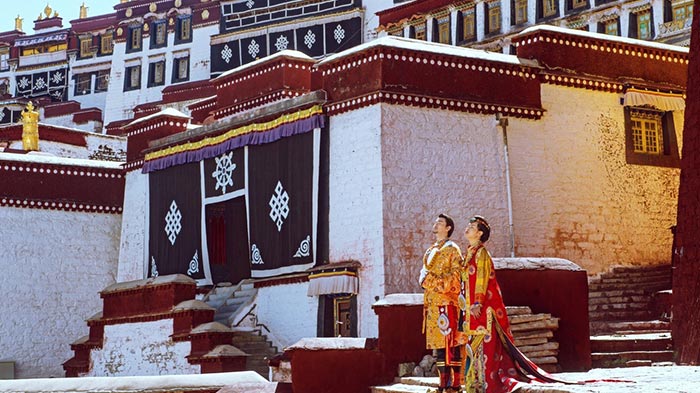 The complete monastery covers the entire peak of the mountain, and looks down over the valley below. Consisting of over 50 buildings, the monastery makes a great setting for photographs, and the scenery of the valley below is a stunning backdrop for the couple as they look out into the unknown. Just below the center of the monastery’s arc-like site, there is a small ridge of a hill, from which it is possible to get a great backdrop photo of the entire site, in all its glory.

Originating from the sides of Mount Nyanchen Thanglha Gangri, the Lhasa River, or Kyuchi River in Tibetan, is one of the major tributaries of the Yarlung Zangbo River. Kyuchi is Tibetan for “Happy”, so the river is called happy river by the locals. The river is a much loved part of Lhasa, and locals often camp and fish along its banks during holidays. 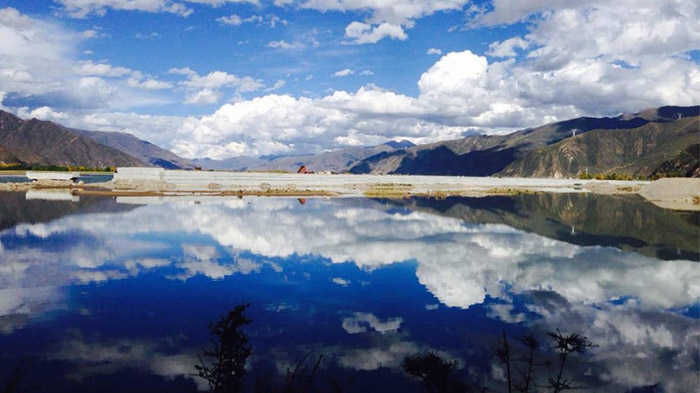 With its huge expansive width as a delta-style river, with many small islets set in its rushing waters, the riverside and islets make a great place to take wedding photographs. From the southern shore of the river, the city makes a great backdrop against the dusky sky, as the sun sets off to the west. And from the northern shore, the view south of the snow-capped mountains is spectacular. There are also several small public parks along the northern banks, which make great places to get the sedately flowing water of the river in the near-background.

Undoubtedly, one of the most popular places to take wedding photographs is beside a beautiful, shimmering lake. With many lakes in the region whose crystal-clear waters reflect the bright, blue sky and wispy clouds that float lazily in the breeze, none is more stunning than Lake Yamdrok. Nestled among the flanks of the gray and green mountains, the waters of Lake Yamdrok reflect turquoise in the sunlight, contrasting the couple as they stroll along the lakeside. With an almost clear lakeshore, there are many spots on the shore where the couple can be shot right at the water’s edge. 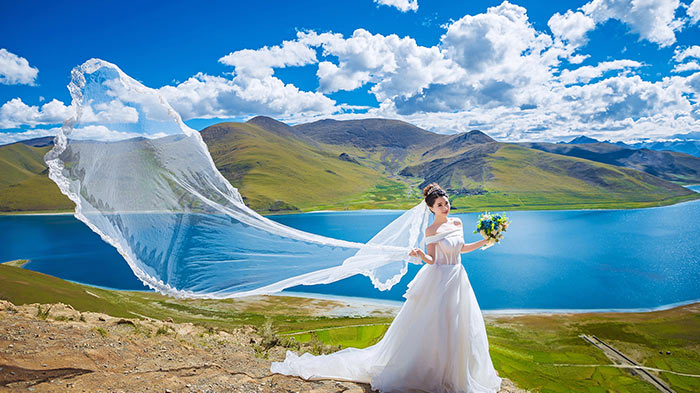 Easily accessible from Lhasa, Lake Yamdrok adds spirituality and mystery to the scene, and the best color to set against the turquoise lake is that of an elegant white wedding dress. A short distance from the lake is the high Gambala Pass, which is one of the best places to view the panorama of Lake Yamdrok in all its glory. And it is a great place to get photos of the couple with the lake as a middle-distance backdrop, with the beautiful Naiqinkangsang Snow Mountain in the far distance.

Known as the “ Heavenly Lake” Lake Namtso is the largest of all the Tibetan lakes, and one of the three holy lakes of Tibetan Buddhism. Unlike Yamdrok, the lake is saltwater, although it also offers some of the most stunning scenery against which to take wedding photos. The naturally stunning beauty and pure, blue waters of the lake add to its spiritual associations. Surrounded by snow-covered mountains, and often dotted with nomads and their herds of yaks, it is rated as one of the most beautiful places in Tibet. 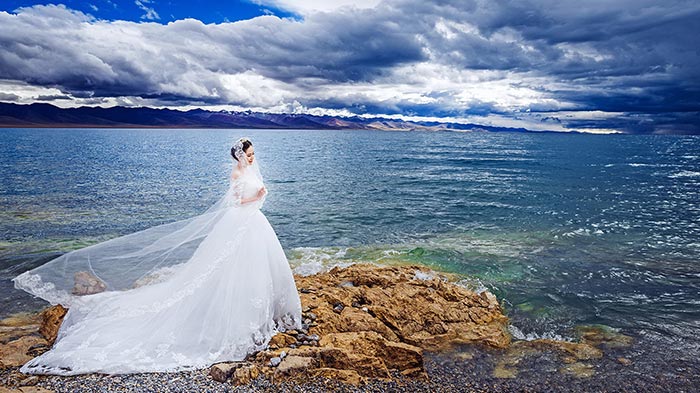 As well as the chance to take great shots of the happy couple at the lakeside, there is also the opportunity to have photos taken with the local yaks, and if you get up nice and early, the sunrise is one of the most spectacular shots you can take at the lake.

1. When taking wedding photographs, there are a host of rental places in Lhasa that can supply local Tibetan costumes for short-term hire, as well as plenty of shops where you can buy authentic Tibetan dress, that you can keep afterwards.
2. One of the main ideas of wedding photography is to keep it simple, and focus on the people, not what they are wearing, so accessories should be kept to a minimum when wearing traditional, white wedding gown and suit. However, Tibetan costumes are very colorful, and full of additions and accessories, so go all out and be daring. You only do it once. It’s advisable for brides to choose exquisite and elegant white wedding dress with a chapel train. It’s also fairly popular to give a try of traditional Tibetan clothes and wear exquisitely-made accessories for the couple. For the bridegroom, the beige classic groom suit or navy blue suit, red trendy suit and traditional Tibetan clothes are also highly recommended.
3. For better image quality and varied scenes, it’s worth bringing a full-frame DSLR and a versatile zoom lens. If you wanna to travel light, 24-70mm F2.8 lens is highly recommended for you for it covers virtually all the useful focal range. While 35mm F1.4 lens has better control of image distortion and can work efficiently in low light environment and 70-200mm lens is preferable to shoot wildlife and Tibetan monks, without making disturbance. Besides, do not forget to buy a quality SDHC card preferably with large memory.
4. When shooting near and around religious sites, it should be noted to take care not to offend any of the monks and lamas of the temple or monastery. And if you are including passers-by in the photos, make sure you ask permission first, as taking photos of them is considered a little rude.
5. Tibetan people do not normally show public displays of affection, so it is wise to keep any intimate contact, such as kissing, to a minimum, so as not to offend people around you.
6. And please do not leave waste and rubbish at sites where you are shooting, especially the lakes and mountain passes, as this can spoil things for other visitors.