Tibet Scenery: what is the best scenery for a Tibet trip?

Surrounded by the Himalayas on two sides, Tibet is a world of natural wonders. From the lakes and mountains of the high Tibetan plateau to the vast open plains and the deep valleys, the landscape is one of outstanding natural beauty. Add to that the ancient Buddhist sites and the ruins of kingdoms long turned to dust, and this stunning land at the top of the world is one of the most amazing places to visit.

Tibet Autonomous Prefecture is made up of seven separate prefectures within its boundaries, namely: Lhasa, Shigatse, Nagqu, Ngari, Shannan, Chamdo, and Nyingchi. Each individual prefecture has its own unique attractions for visitors to this long-isolated region, and each is unique in its topography and natural landscapes, making each one a must-visit location within Tibet.

For the Mind-blowing Natural Wonders in Tibet

Go for the Jaw-dropping Himalayan Scenery in Tibet

The main area for the stunning Himalayan Mountain scenery is in Shigatse Prefecture, to the west of the Tibetan capital of Lhasa. A little over 200 kilometers to the southwest of Shigatse City, still in Shigatse Prefecture, is the world’s highest mountain and the most popular tourist location in Tibet, Mount Everest. Standing at an incredible 8,844.43 meters above sea level, this massive peak is part of the Himalayan Mountain Range. 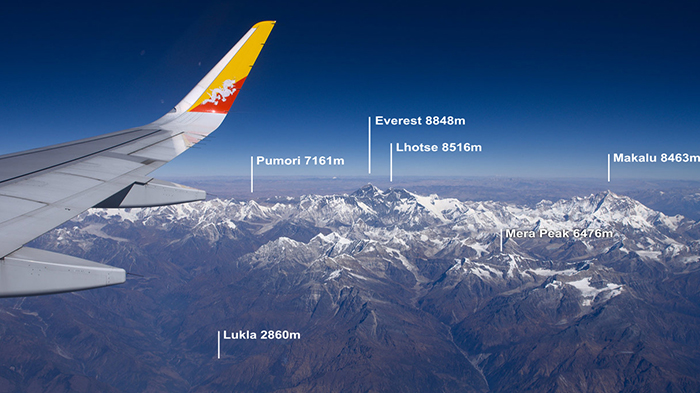 The stunning scenery of the Himalayas is something no-one traveling to Tibet can possibly miss, since it is visible all around you as you travel across the region, and anyone taking the Everest Base Camp tour will actually drive into the mountain range to get to the base camp itself. The route to the mountain heads up over the famous Gawu La Pass, which lies at an elevation of 5,198 meters. The view of Everest is astounding, but this stunning view is more than just Mount Everest. Mount Shishapangma, Mount Lhotse, Mount Makalu, and Mount Cho Oyu, to name a few, are all clearly visible from Gawu La Pass, and are all above 8,000 meters in height.

Lake Manasarovar is probably the most sacred of the three, as it is believed to be the place where Maya Devi conceived Buddha. For Buddhists, this makes it a very sacred lake, and it is widely believed that to bathe in the waters will absolve you from a lifetime of sins. Located more than 2,000 kilometers to the west of Lhasa, the lake lies a short distance from Mount Kailash, the world’s most sacred mountain. For those planning a visit to the lake, it is normally part of the Mount Kailash tour, and is usually visited after completing the Kailash kora. 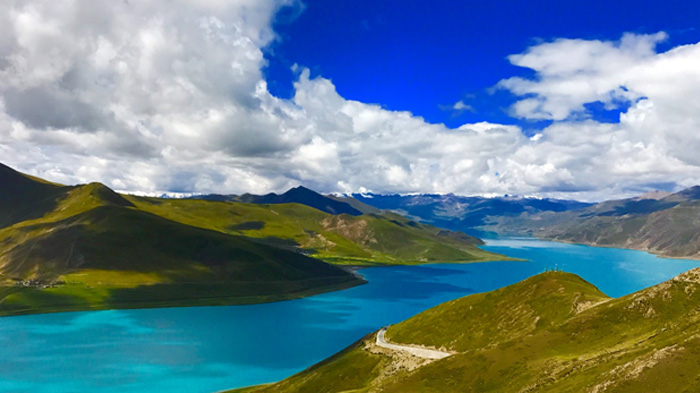 To the north of Lhasa, in Damxung County on the boundary between Lhasa and Nagqu Prefectures, lies the second of the Great Three. Lake Namtso, known as the “Heavenly Lake”, is one of the most beautiful sights in Tibet. Sandwiched between the mountains and the vast open plains of Nagqu, Lake Namtso is the highest saltwater lake in the world, at an altitude of 4,718 meters. The stunning lake has five small uninhabited islands, which were once used as summer hermitage sites for ancient Buddhist monks, who would walk across the frozen lake in the winter, and stay until the waters froze again.

The third of the sacred lakes, Lake Yamdrok, lies a short distance to the southwest of Lhasa, in Shannan Prefecture. Often visited as part of the tours that head for Shigatse and Mount Everest, this beautiful lake is said to be the pearls of the earring of a goddess. It is believed that if the lake ever dries up, Tibet will no longer be habitable. The lake is also unique in that it has perfect balance. While there are many small streams that feed the lake, there is no outflow, which means that the evaporation of the water is perfectly balanced to the inflow to maintain the constant level of water that the lake has.

Mt. Kailash, a Blend of Highland Trekking and Buddhist Pilgrimage

The most sacred mountain in the world, Mount Kailash stands tall in the Gangdise Mountains in Ngari Prefecture. Believed to be the center of the universe in three of the four religions that consider this mountain to be sacred, it is the site of one of the most important pilgrimages in Tibetan Buddhism. It is also one of the best trekking locations in Tibet, with the Kailash kora trek, a 52-kilometer hike around the mountain, being a favorite trek for international travelers to the region. Traveling through some of the area’s most beautiful scenery, the trek takes you over one of the highest passes in the region, the Dolma La Pass at 5,636 meters above sea level. That’s why, for most travelers who taking a Mount Kailash tour, they would like to experience the Kailash kora even they are not pilgrims. 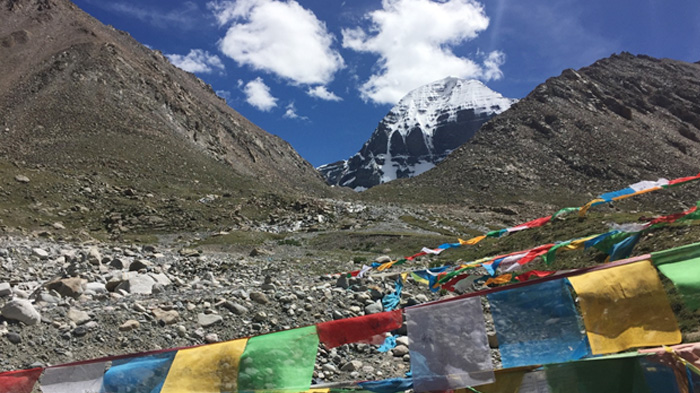 Do the Mount Kailash Kora once in your lifetime

To the east of Lhasa lies Nyingchi Prefecture, the area of the Tibetan plateau with the lowest elevation. Filled with lush forested valleys and snow-capped mountains, the area is one of the most beautiful in Tibet. Every spring, the abundance of peach trees in Nyingchi come into bloom, and the valleys are filled with the delightful colors of the peach blossoms, which last for around a month from mid-March to early April. 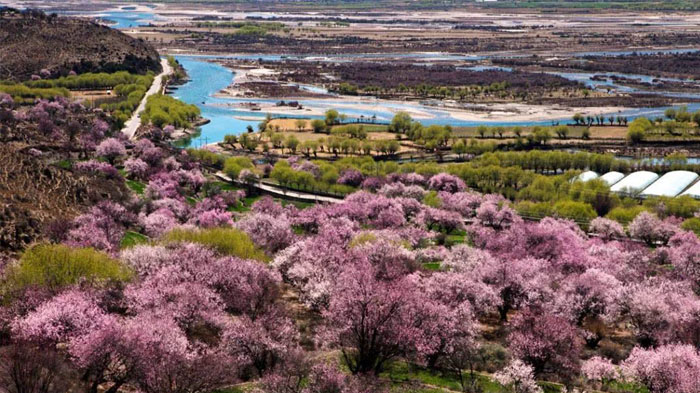 Take a part in the Nyingchi Peach Festival in spring

Nyingchi is also the location of the Great Bend of the Yarlung Zangbo River, which later becomes the Brahmaputra River, one of the world’s longest rivers. At the Great Bend lies the stunning Mount Namche Barwa, more than 700 kilometers from the nearest town. At 7,782 meters, this makes it the eastern anchor of the Tibetan Himalaya. Nyingchi is also well known for its Lulang Forest, one of the most beautiful places on the planet, known as a fairytale land of Gods and the beauty of Pagsum Lake, known in Tibetan as the Three Rocks Lake.

With so many high mountains, Tibet is also well known for its high, snowy passes, many of which reach heights of more than 5,000 meters. From the minute you enter Tibet by train, across the high Tanggula Pass, you will find yourself traveling over high passes along almost every road in the region. On the route to Lake Namtso is the Nargenla Pass, at 5,190 meters, from which you get a great view of the holy lake, and the Mila Mountain Pass, between Lhasa and Nyingchi on the G318, is famous for its stone yak sculpture that sit at the side of the road at the crest of the pass.

For the Sacred Buddhist Sites and Ancient Ruins in Tibet

When it comes to sacred sites in Tibetan Buddhism, there are none more striking than those found in Lhasa, the Tibetan capital. The prime site of Tibetan Buddhism, and the most sacred, is the Jokhang temple, a 1,300-year-old temple built to house the famous statue of the Sakyamuni Buddha that was brought to Tibet by the Princess Wencheng when she married the Tibetan king, Songtsen Gampo. Not far from the Jokhang, is the former seat of governance in Tibet and the winter palace of the Dalai Lama, Potala Palace, sitting atop Moburi, overlooking the city. 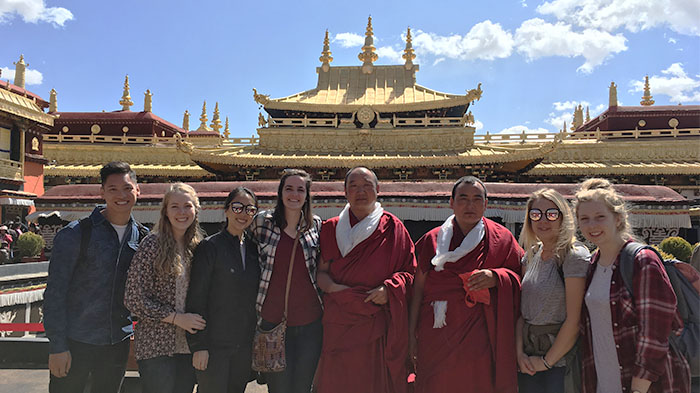 Jokhang Temple is one of the must-sees for all Tibet Tours.

As for monasteries, Lhasa has several, most notable the Sera, Drepung, and Ganden Monasteries, known as the Great Three monasteries of the Gelugpa School of Tibetan Buddhism. The three prime sites of the Yellow Hat sect, they are three of the most visited monasteries in Tibet. Of three, Drepung Monastery is known for giant Thankga Buddha display during Shoton festival, while Sera Monastery makes her famous for its boisterous monk debate in the afternoon. And the Ganden monastery offers you best scenic kora on Wangbur Mountain, outside Lhasa city.

To the west of Lhasa lies the city of Gyantse, in Shigatse Prefecture. The home of he Gyantse Dzong (fortress) and the Gyantse Kumbum, it is one of the most enjoyable places to visit. The fortress was built in 1390 to guard the southern approach to Lhasa, on the site of an even more ancient fortress known as Gyel-khar-tse, which dates back to around 840 AD. The Kumbum, a giant stupa that is the only one of its kind in Tibet, stands 32 meters tall and has nine levels, which house 108 chapels.

Well known as the seat of the Panchen Lama, the Tashi Lhunpo monastery in Shigatse is an astounding building, which was built by the first Dalai Lam in around 1447. Now known as the largest functioning religious institution in Tibet, this huge monastery once held more than 5,000 monks in more than 3,000 buildings and was the head monastery of 51 other subordinate monasteries in the realm of ancient Tibet.

View Mt. Everest at Rongbuk Monastery and Do Meditation There

For those traveling to Mount Everest, one of the places you will stop is the Rongbuk Monastery, the highest monastery in the world at 5,154 meters above sea level. Aside from the amazing view of the nearby Mount Everest from the hill behind the monastery, it is well known for being the place where the world-renowned Sherpa, Tenzing Norgay, was given his name by the abbot of the monastery. Described by one of the first western people to see the monastery as “a hall of grandeur that led to the mountain”, the site of the monastery was a former site of meditation huts and caves that had been used by nuns since the 1700s. Those caves still exist, and you can spend time in them in meditation and contemplation, as the nuns and monks have done for centuries.

In the far northwest of Tibet, in Ngari Prefecture, lies the ancient Guge Kingdom, formed by a royal prince after the fall of the ancient Tibetan Empire that had been forged by the great Tibetan king, Songtsen Gampo. In what is now the modern-day Zanda County, the Guge Kingdom arose in around the 10th century, and included major portions of Zanskar in Kashmir, the Upper Kinnaur district and the Spiti Valley area in what is now the Indian State of Himachal Pradesh. The ancient capital was centered at Tsaparang, not far from the sacred Mount Kailash, in the Sutlej Valley. While the kingdom lasted for several hundred years, it was subject to numerous invasions and attacks, and all that remains now are the crumbling ruins in the arid lands of Ngari Prefecture. 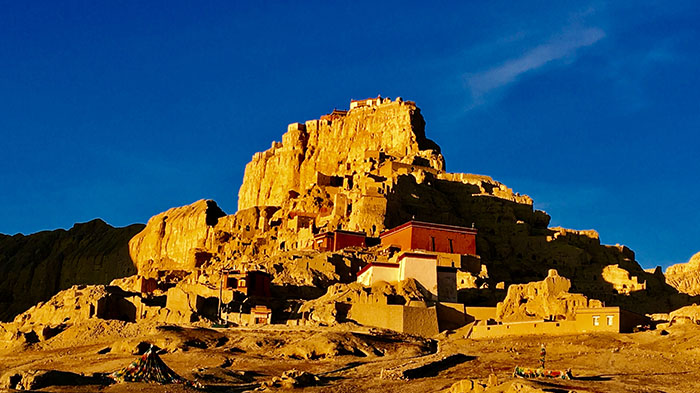 Undoubtedly, the Ruins of Guge Kingdom is a treasure in the west Tibet.

0 Comment ON "Tibet Scenery: what is the best scenery for a Tibet trip? "