Above is a detailed table of Tibet mountains for your quick check. See more at Tibet tour packages. 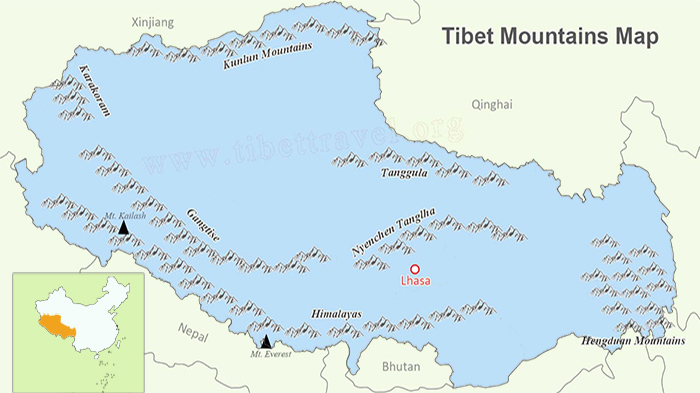 Located on the south side of the Tibetan Plateau, the Himalayas goes from east to west, which is mainly lying on the border among China, India and Nepal. It’s made up of many parallel mountains arranging from south to north, namely Mt.Xifalike, the small Himalayas, the large Himalayas. Having an average altitude of 6,000 m, the Himalayas is 2,400 km in length, around 200 to 300 km in width. More than 50 mountains have an elevation of over 7,000 meters, among which 11 mountains are 8,000 meters above sea level. Mount Qomolangma is the main peak of the Himalayas at a height of 8,848.13 meters.

The Himalayas has many largescale contemporary glaciers and widely-distributed glacial landforms like cirque, glacial horn, etc. Serac forests are spreading miles upon miles below snow lines.The north slope of the Himalayas is relatively flat, while the south slope is high and precipitous. And the snow line on the south slope is much lower for abundant rainfall brought by southwest monsoon from the India Ocean. 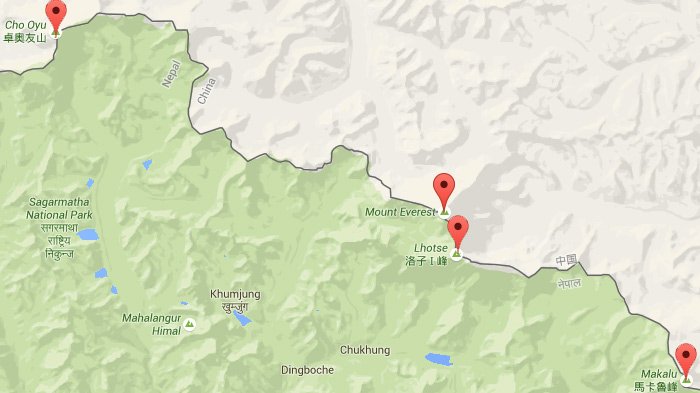 Tibet highest mountains in the Himalayas

As the highest mountain on earth, Mount Everest (Mount Qomolangma) is 8,848.13 meters in height, standing on the border between China and Nepal. Mount Everest is a typical fault block mountain and the pyramid Everest Summit consists of brown marble and crystalline limestone. According to the scientific reports and documents, Mt.Everest has kept rising at the speed of 3.2 to 12.7 mm per year and broken the record set by herself.

Affected by the southeast monsoon and northwest cold current, climate in Mt.Everest is complicated and unstable. Weather in Mt.Everest varies greatly within a single day. The best months to trek Everest Base Camp are March, April, May, September and October for the milder weather. 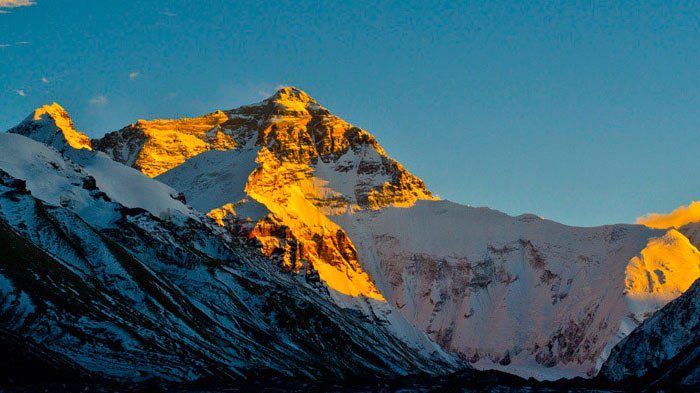 Tibet Mountain Range ：Himalayas
Tibet Mountain Height ：8,848.13 meters
Tibet Mountain Location：Dingri, Shigatse, Tibet
Best Time to Visit Mt.Everest : March, April, May, September and October
How to Get to Mt.Everest : You can take Tibet train or flight to reach Lhasa first. We’ll drive you two days from Lhasa to Xegar along Friendship Highway and move southwards to Rongbuk Monastery (5,154 meters) to get ready for EBC trekking.

As the forth highest mountain on earth, Mt.Lhotse is 8,516 meters in height and just 3 km away from Mt.Everest. As a mountain between China and Nepal,its east side is in Tibet, China, but the west side belongs to Nepal.

Mt.Lhotse has a complex terrain and changeable weather. Its wind speed is lower than Mt.Everest but the precipitation is larger. Rainstorms and snowslides often happen from June to mid-September. The minimum temperature in winter drops to 60 centigrades below zero. The climate is relatively stable from March to May and September to October. Up to now, no one has succeeded in reach the summit of Mt.Lhotse from China side. 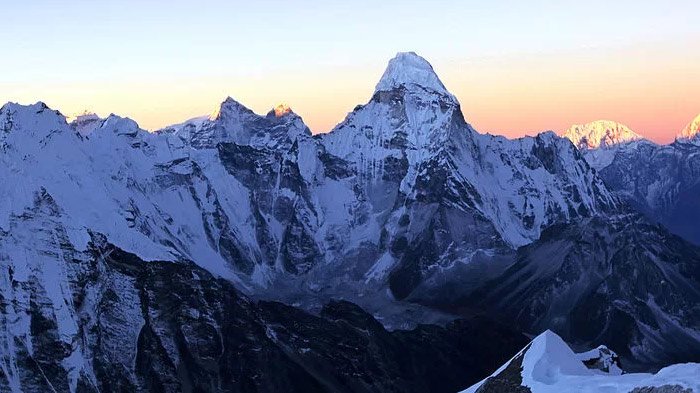 Lhotse is the second highest mountain in Tibet.

Tibet Mountain Range ：Himalayas
Tibet Mountain Height ：8,516 meters
Tibet Mountain Location ：Dingri, Shigatse, Tibet
How to Get to Lhotse : We usually drive along Friendship Highway from Lhasa to Xegar for two days and then move southwards to Rongbuk Monastery (5,154 meters). The total distance amounts to 780 km.

As the fifth highest mountain on earth, Mt.Makalu has an elevation of 8,463 meters. The north side belongs to Tibet, while Nepal has the south side. Majestic glaciers with cracks spread acorss the whole area, making snowslides occur to Mt.Makalu frequently. 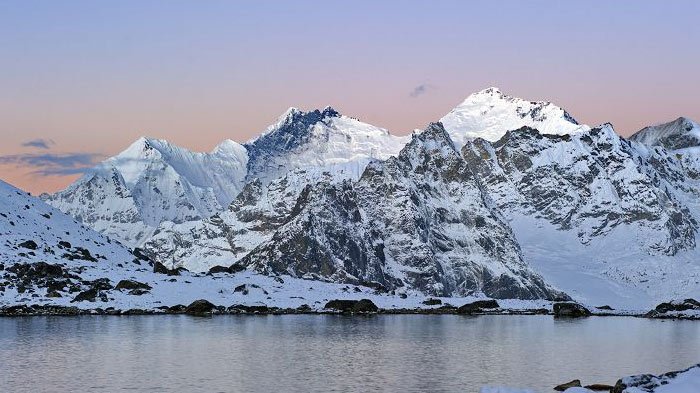 Makalu is the third highest mountain in Tibet.

Tibet Mountain Range ：Himalayas
Tibet Mountain Height ：8,463 meters
Tibet Mountain Location ：Dingri, Shigatse, Tibet
How to Get to Makalu : It usually costs two days to drive along Friendship Highway from Lhasa to Xegar and then heads about 180 km westwards to Shajitang Base Camp (3,600 m).

As the sixth highest mountain on earth, Cho Oyu has a heigt of 8,201 meters. Lying on the border between China and Nepal, the north is own by China and the south by Nepal. It’s about 100 km away from Mt.Everest and has a similar climate. 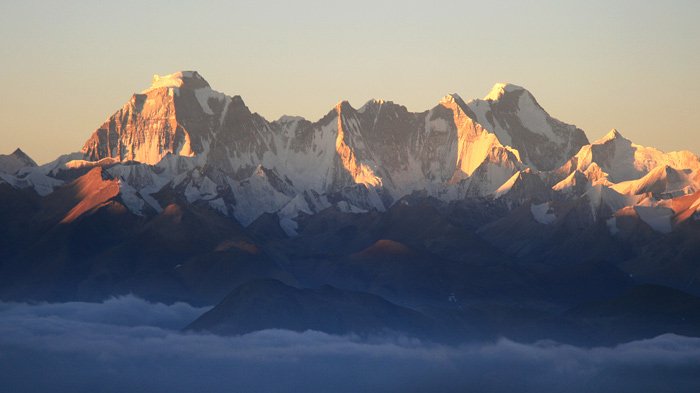 Cho Oyu Makalu is the forth highest mountain in Tibet.

Shishapangma (The 14th Highest Mountain in The Word)

Shishapangma, at the altitude of 8,012m, is the only 8000-meter-high mountain completely situated in Tibet, China. But the widespread ice cracks and frenquent snowslides are the great barriers for Tibet mountaineers and climbers. 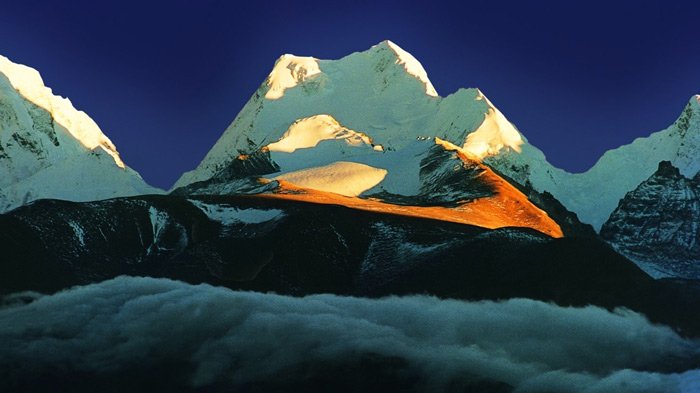 Shishapangma is the 14th highest mountain on earth.

Lying in the central part of Tibet Autonomous Region, it starts from Jiali in Chamdo, and extends southeast to Boxoila Ling in Hengduan Mountain Range, west to Shiquanhe in Ngari, south to the Brahmaputra Valley. It divides northern Tibet from southern Tibet and southeastern Tibet, which is also the boundary between inland rivers and outflow rivers in Tibet. It’s 400 km long from east to west, 80 km wide from north to south.

Seated at Pulan in Ngari Prefecture, Mountain Kailash, the second highest peak of the Gangdise, has an altitude of 6,638m. As the holiest mountain in Asia, Mt.Kailash is regarded as the pilgrimage center by Bon, Tibetan Buddhism, Hinduism and Jainism.It’s said that Kailash kora can wash away people’s sin in their lifetime. Even if you are not a pilgrim, th most intoxicating picturesque scenery of Mount Kailash and Lake Manasarovar is worth your coming! 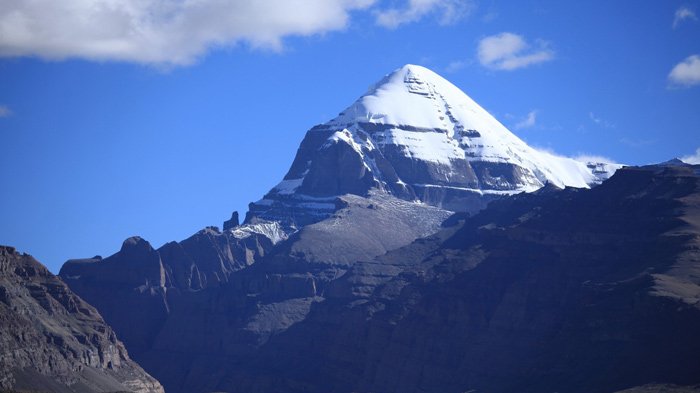 Mount Kailash is the most sacred mountain in pilgrims' mind.

Standing in the northwest of Qinghai-Tibet Plateau, Karakoram Range is conjunct with the Pamirs, the Himalayas and Mount Tanggula. The major part is on the border between Xinjiang Uygur Autonomous Region and Kashmir and stretches eastwards to Tibet. 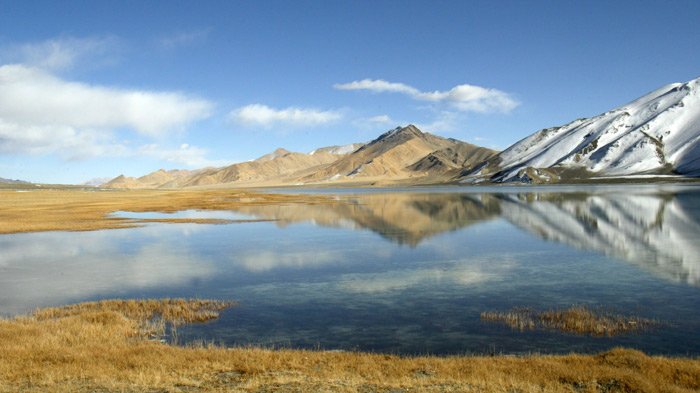 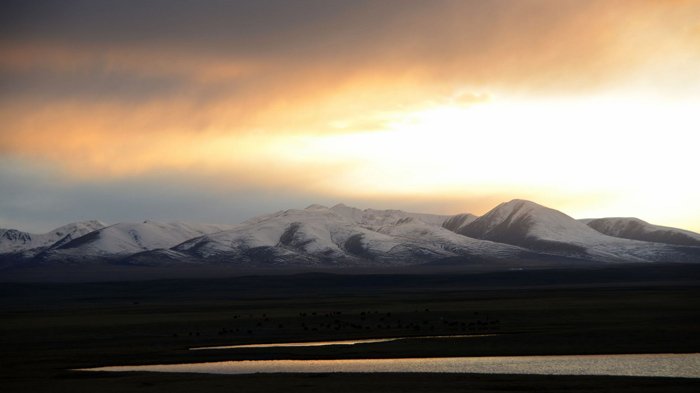 Kunlun Mountains tower at the north of Qinghai-Tibet Plateau as the boundary between Tibet and Xinjiang. It goes from the Pamirs in the west and eastwards to the northwest of Sichuan Basin. It’s 2,500 km long from east to west and 150 km from north to south, 5,000 to 6,000 meters in altitude. Stretching across Central Asia, it’s famous as the Spine of Asia for its great height and length. Thousands of glaciers are spreading over the Kunlun Mountains, among which the longest one reaches 25km. 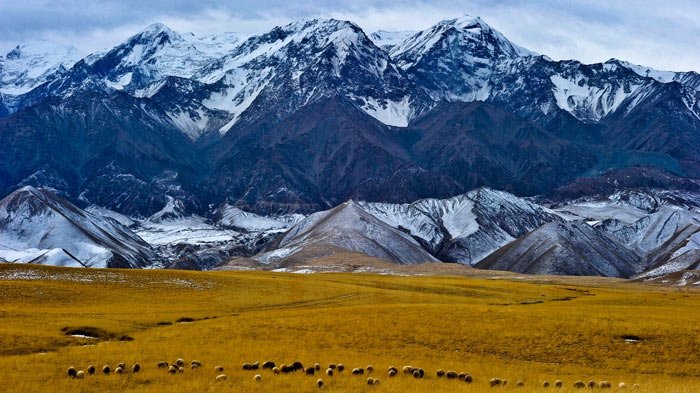 Seated on the southeast of Qinghai-Tibet Plateau, Hengduan Mountain Range is a general name for the north-south mountains in the east of Tibet, and the west of Sichuan and Yunnan. Ridge and valley from west to east are as follows: 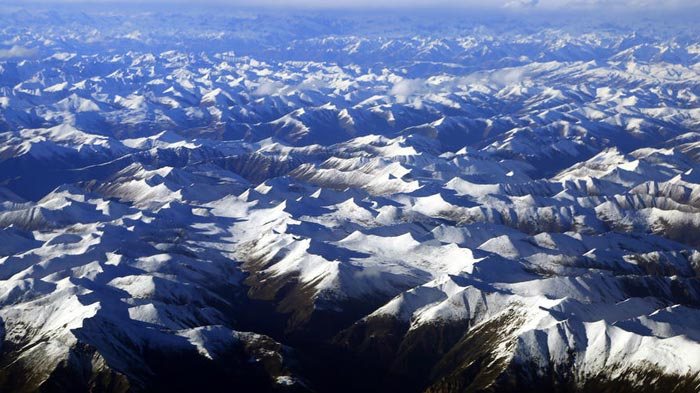 The height of mountains goes down from north to south. But the depth of valleys goes up from north to south. The altitude difference between mountains and valleys ranges from 1,000 to 2,500 meters. The north part turns out to be a good place for grazing in summer. However, there are more rapids and shoals in the south.

Acute mountain sickness (AMS) is also named as altitude sickness, which has something to do with higher altitude, lower atmospheric pressure and less oxygen. It’s common at the high places and the relevant factors include ascend speed, individual susceptibility, etc.

The best way to prevent Tibet mountain sickness is to avoid ascending to high elevation rapidly. You’d better ascend slowly, drink enough waters and eat light. If Tibet Mountain Sickness happens to you, try to calm down and descend to lower places as soon as possible. It’s also suggested to check with your family doctor and take some Hongjingtian before Tibet travel.