The Latest FAQs on Nepal Travel 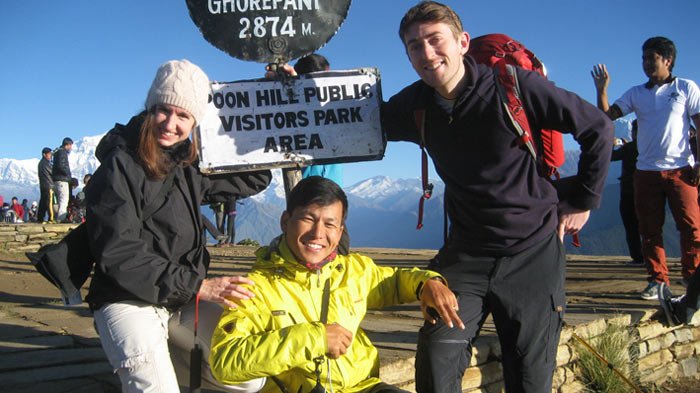 Tourists took a snapshot during their trekking in Poon Hill in Nepal.

a. Is it possible to travel overland to Nepal?

So far there are two major overland gateways to reach Nepal between Sino-Nepal border, i.e. Zhangmu Port and Gyirong Port.

Though no official statement indicates that Zhangmu Port is so far accessible, the road condition may only be suitable for sport utility vehicles and one thing for sure is that the customs officers and local residents of Zhangmu town are still based in makeshift settlements. So the possibility to access Nepal from Zhangmu port remains low and risky.

Gyirong Port, affected by the earthquake and later got shut down, was reopened on 13, Oct, 2015. Sun Lijun, the director of Gyirong Port management department, said the Nepal earthquake crippled the highway to Gyirong Port which led to the closure of the port. After months’ renovation work, now the Gyirong Port was available and ready for use. However, the newly-reopened Gyirong Port was not open to tourists. In conclusion, for tourists so far travelling overland to Nepal is not an option based on official estimation.

b. “Fuel Crisis” in Nepal

International Oil Corporation began supplying oil to Nepal since Oct, 13, 2015. Currently, around 200 fuel tankers loaded with oil and other vehicles with gas supply are entering Nepal from Belhiya border point in Rupandehi. The current fuel crisis is expected to be solved soon.
On 14th, Nepal Oil Corporation announced that it would release 600,000 liter oil to ease the fuel crisis. Yet, as the actual release of these oil still takes time, currently the oil price remains high with many problems unsolved. Meanwhile, the liquefied gas supply for civilians stays low.

c. Was there a massive cancellation of flight from China to Nepal?

China Eastern Airlines (CEA) recently had announced that since Kathmandu airport couldn’t provide aviation fuel for quite a while, CEA decided to cancel the round-trip flight from Shanghai-Kunming-Kathmandu (from 15th , Oct to 25th , Oct) and offered free ticket refund and rescheduling service. And China Southern Airlines also cancelled the flights (from Oct, 1st to Oct 23rd ) to Kathmandu while Air China’s flights to Nepal was not affected but with limited seats.

d. Is it difficult to exchange for Nepalese Rupee?

Of course not! The current exchange rate is as follows:

(The exact exchange rate please refers to the place you stay.)

e. Was there a new earthquake in Tibet?

According to The China Earthquake Networks Center, Nyalam County,Shigatse, Tibet Autonomous Region, suffered 4.2 magnitude earthquake on 10th, Oct, 2015 and the source of earthquake was believed to be as deep as 6,000 meters down the ground.

f. Was Nepal Worth Travelling after Eearthquake ?

Definitely, Yes! The Nepalese and the entire country kept moving forward with steady recovery of its vibrant tourism and economy. Dashain , the grandest nation-wide cerebration in Nepal, is currently being hold from Oct, 13 to Oct, 27. And there are many more for tourists to explore.