Traveling to Tibet is an amazing experience, and to make that experience even better, Lhasa has some great five-star hotels for you to stay in during your visit. While this vast land on the world’s highest plateau may be isolated and bleak in some areas, with very basic accommodation, Lhasa is a city that has adapted well to the tourism industry, with plenty of modern hotels that come up to the standards you would expect from quality accommodation.

While there are more than 380 hotels in the Tibetan capital, Lhasa has just a few hotels that are rated as five-star or “quasi” five-star (meaning that they are prospective five star hotels), which include the St. Regis Resort Hotel, Lhasa Brahmaputra Grand Hotel, Lhasa Jardin Secret Hotel, Fourpoints By Sheraton, Lhasa Manasarovar Hotel, the Songtsam Retreat, the Shangri-La Hotel, and the InterContinental Lhasa Paradise. But whichever of these stunning hotels you choose to stay in, you can be guaranteed a stay in the lap of luxury in Lhasa, the provincial capital of Tibet.

One of the main luxury hotels in Lhasa, the St.Regis Lhasa Resort is an international hotel that forms part of the Starwood Hotels and Resorts Worldwide, and is one of the few environmentally-friendly hotels in Lhasa. The hotel has been renowned for its use of both solar and geothermal power to reduce its carbon-based energy consumption, making it the greenest hotel in the city. 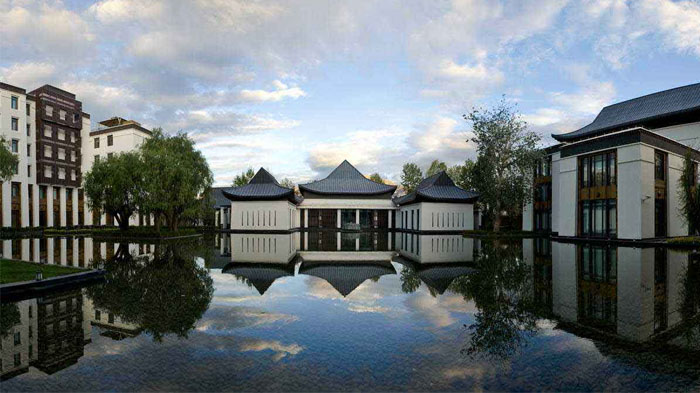 This unique hotel is located close to the famed Potala Palace, the sacred Jokhang Temple, and the amazing Barkhor Street. Situated on the Jiangsu Road, the hotel is only 9 kilometers from the Lhasa Railway Station, and covers one of the largest areas of any hotel in Tibet. With awesome views of the distant Himalayas and the beautiful Lhasa Valley from all of its 162 luxury rooms, the St. Regis offers refined luxury and a superlative service for all its guests.

All of the hotel’s rooms, villas, and suites feature a distinctive style and décor that integrates modern luxury with traditional Tibetan design. The hotel also offers a wide range of Nepali, Tibetan, Cantonese, Sichuan, and international cuisine in its all-day signature restaurant. And for the wine lovers, the Haut-Brisson wine bar offers more than 140 labels of the world’s most popular and seductive wines. Undoubtedly, this is the ideal location for that ultimate luxury experience.

A seductively stylish five-star hotel, the Songtsam Retreat Hotel, also known as the Songtsam Choskyi Linka, is a recent addition to the quality hotels in Lhasa, having been opened by the Songtsam Group in 2017, which also provide seven boutique lodges in the Tibetan areas of Yunnan Province in Southwest China. With only 50 rooms, the hotel is relatively small, but every room is a stone and wood villa with separate living rooms and bedrooms, and each has its own balcony that looks out across the city to the Potala Palace. 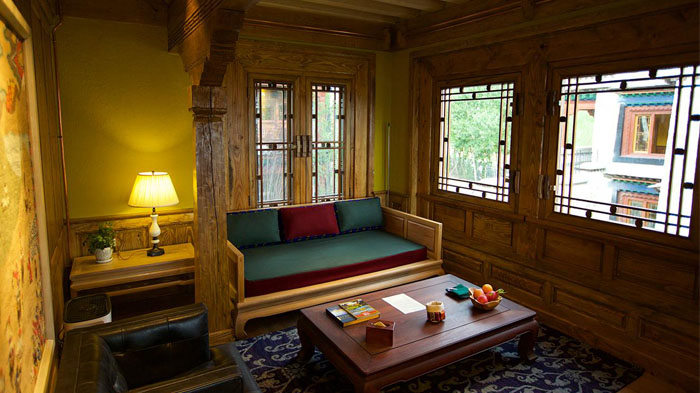 The hotel is located in the Cijiaolin Tourism Cultural and Creative Area in Chengguan District, to the south of the Kyi-chu River, just 5km from the Ramoche Temple, 4km from the Jokhang Temple, and 6km from the Potala Palace. All the rooms have an internal oxygen supply system, with desks, coffee machine, mini-bars, and air-conditioning.

Featuring an amazing internal restaurant that serves authentic local cuisine, as well as cuisines from all across Asia, the hotel also has a terrace for diners to enjoy their meals outside. However, the most pleasant surprise is the French Provençal cuisine and the huge selection of imported French wines, promoted by its French manager. If style is your choice, then the Songtsam is the ideal place to stay.

One of the premier hotels in Lhasa, the Shangri-La Hotel was inspired by the classic novel from James Hilton known as Paradise Lost, which tells of an ancient paradise in the high Himalayas. And this classic novel is one of the complimentary gifts for all guests to the hotel. This beautifully styled hotel offers luxurious rooms in classic Tibetan styled, but with all the modern amenities that you would need, including en-suite bathrooms with 24-hour hot water for the mixed bath and showers, sizes ranging from 43 square meters up to 250 square meters per room or suite, and a private balcony. 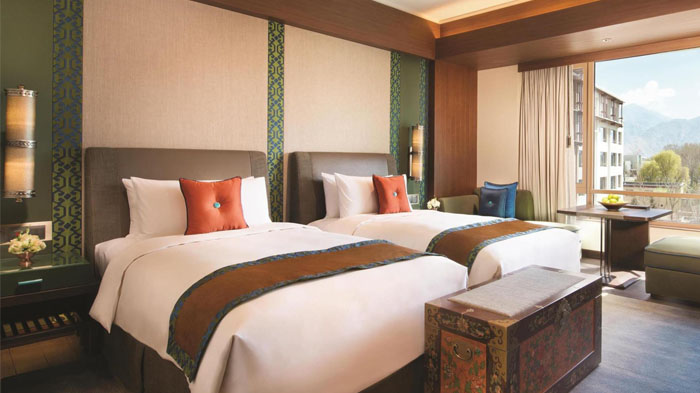 Located on Luobulinka Rd, Chengguan District, the Shangri-La lies only 1km from the Potala Palace, a few hundred meters from Norbulingka Palace, and just 4km from the Jokhang Temple and Barkhor Street. The most notable aspect of the hotel is the Horizon Club, a proper “gentleman’s club” within the hotel. All of the club’s services are available 24/7, and the unique concierge services can take care of your every need. There are even secretarial services available for astute businessmen. And with a cocktail reception for all Horizon Club guests and complimentary breakfast daily, this is the ultimate in gentleman’s pampering.

Dining is also a unique experience at the Shangri-La, with five restaurants to choose from, including the Shang Palace, Altitude, Lodger’s Lounge, Shambhala, and Shu Garden. Enjoy a wide range of cuisines from all around the world for the culinary journey of a lifetime. And for those with a fitness fetish, the hotel has a full gym, swimming pool, oxygen lounge, relaxation pavilion, and their own signature spa resort, known simply as The Spa.

Located alongside the Lhasa River, on the northern bank in the downtown area of the city, the Intercontinental Lhasa Paradise is one of the largest hotels in Lhasa. With 475 rooms and suites, with spacious well-decorated Tibetan styling, the hotel has a distinctly modern feel, but with traditional Tibetan décor throughout. Each room includes air-conditioning, private bathrooms with hot water 24 hours, mini-bars, and private balconies. 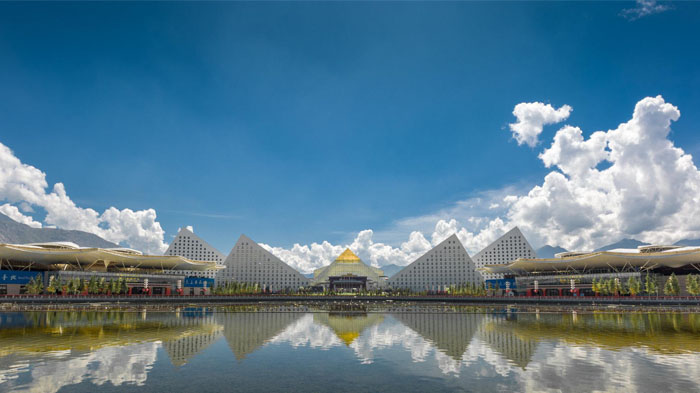 The hotel is located on Jiangsu Avenue, 3km from the Jokhang Temple an d Barkhor Street, 5km from the Potala Palace, around 7km from Norbulingka, and just 12km from the railway station. While the hotel’s décor may feel modern Tibetan, the interior design of the deluxe rooms has a Victorian feel, with canopy beds, gilded mirror frames, antique table lamps, and classical Victoriana furniture.

The hotel is set in a series of glass pyramid structures, which includes a complete spa treatment resort, several local and international restaurants, on-site business facilities, three health and fitness centers, and even a shopping mall. The many restaurants include such great names as the Teppanyaki Japanese restaurant, the Altitude Bar, the Himalayan Café, the Longxue Chinese restaurant, and the Cha Lounge for those that adore Tibetan tea.

One of the most luxurious of the Tibetan capital’s five-star hotels, the Brahmaputra Grand Hotel is a very unique museum hotel. Constructed in a traditional Tibetan design, the hotel is decorated with a host of ancient Tibetan and Buddhist artifacts. Located in the downtown area of Lhasa, in Yangcheng Plaza of the Chengguan District, the hotel is situated less than a kilometer from the Jokhang Temple and Barkhor Street, and just 5km from the Potala Palace. Overlooking the Lhasa River, the hotel is not only close to the major attractions of the city, but is convenient for the Lhasa Gonggar International Airport. 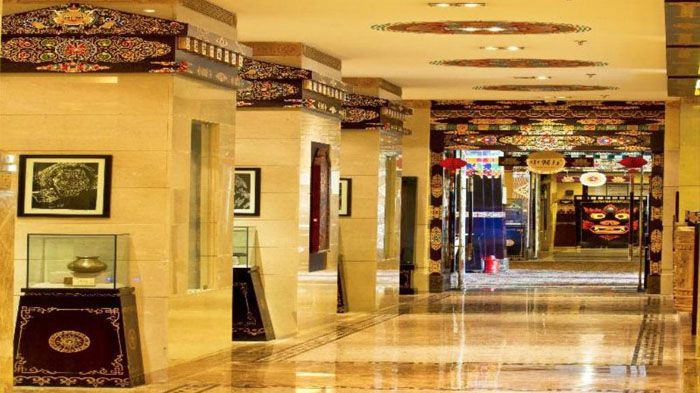 With 185 rooms decorated in traditional Tibetan style, all rooms have air-conditioning, private bathrooms with bath and shower facilities, IDD telephones, and very fast Wi-Fi internet. The other services of the hotel include complimentary laundry services, a complete fitness and spa center with sauna and massage rooms, and a large nightclub for those late evening activities.

The Brahmaputra Grand has a deep local cultural foundation, and is proud of its showcasing of the unique artifacts that adorn its walls and halls, one of the largest single collections of Tibetan antiquities outside of the Buddhist monasteries. And for those that love to be outside, the outdoor pool and tennis courts are a perfect way to spend a summer afternoon.

Lhasa also has many other hotels that do not meet the standards for five-star status, but which are also worth staying in, as they have excellent services and quality standards. As the five-star hotels can be very expensive, hotels like the Lhasa Yak Hotel and the Lhasa New Mandala Hotel can give you excellent services and a comfortable stay without the high price tags. 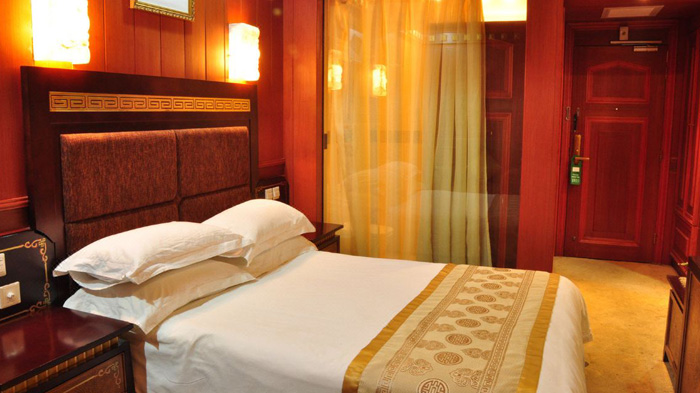 The Yak Hotel is a 4-star hotel located in the center of Lhasa, on the Beijing East Road just 600 meters from the Jokhang Temple and Barkhor Street. A comfortable and delightful hotel, with a quiet secluded garden, peaceful surroundings, and English speaking staff, this hotel is a worthy substitute for the five-star hotels in the city.

The Lhasa New Mandala Hotel, which is located in Barkhor Street South, is just a few meters from the Jokhang Temple, right in the center of the old quarter, and just 2km from the famous Potala Palace. With its English speaking staff and spacious comfortable rooms, this three-star hotel gives a much better service than its star rating would suggest, making it a good choice for cheaper accommodation in Lhasa.

While there may be a huge number of hotels in Lhasa, the five-star luxury of the major hotels is quite limited, so it is a good idea to book early to ensure you can get the room or suite of your choice. Lhasa is no shabby town on some high plateau in the middle of the Himalayas, it is a very modern and ancient city combined, on a high plateau in the middle of the Himalayas. For anyone traveling to Lhasa to enjoy the spiritual and cultural experiences this city has to offer, why not do it in style. Being on the world’s highest plateau does not mean you have to give up the luxuries of life all the time. 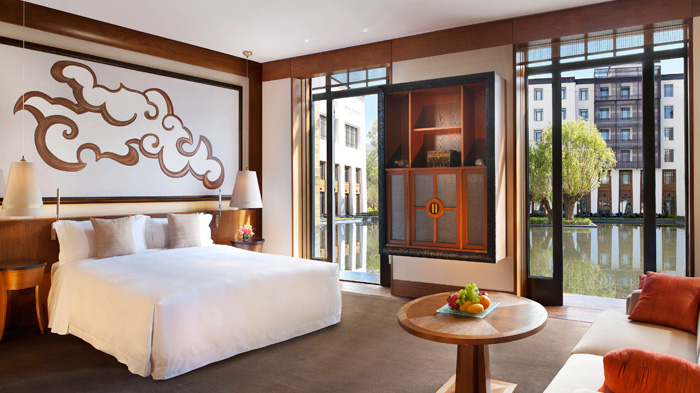 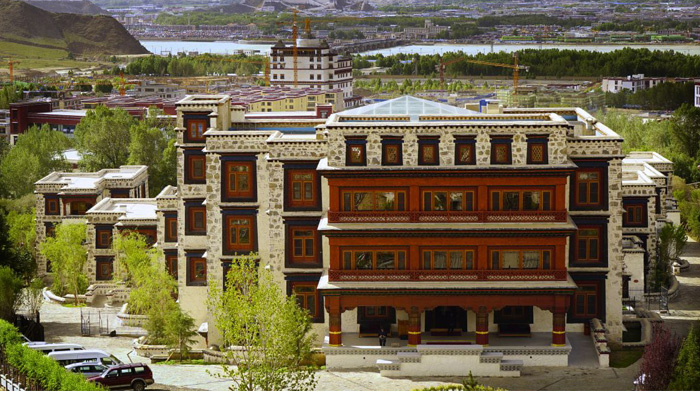 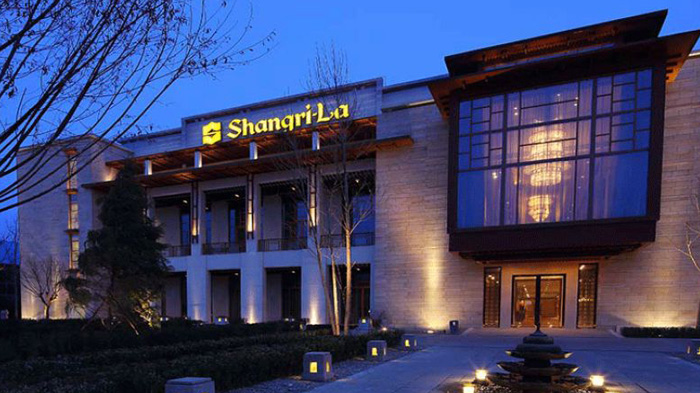 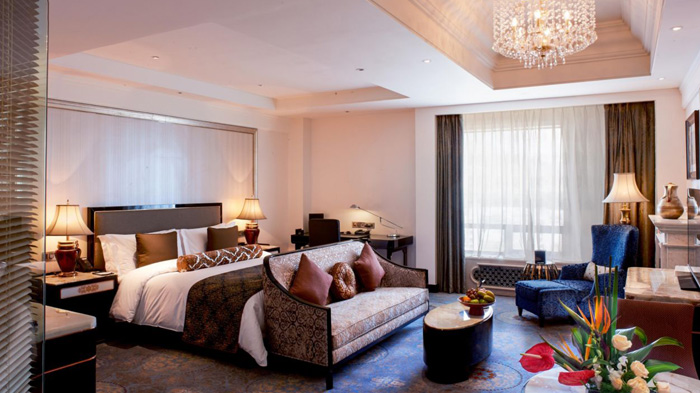 0 Comment ON "Five-star Hotels in Lhasa: enjoy a luxury hotel experience in Lhasa"