Hotels in Sakya: what’s the best hotel in Sakya?

Located around 25 kilometers from the main G318 Friendship Highway in Tibet, between Shigatse and Lhatse, in Sagya County, Sakya Town is the home of the famous Sakya Monastery. The first monastery of the Sakya School of Tibetan Buddhism, the monastery was built in 1073 by the Nyimgmapa monk, Konchok Gyelpo, of the most powerful noble family in Tsang. A small community of people, the town of Sakya is the main place to stay for people stopping off to visit the Sakya Monastery on a tour of Tibet, and you may visit Sakya during your tour to Everest Base Camp. 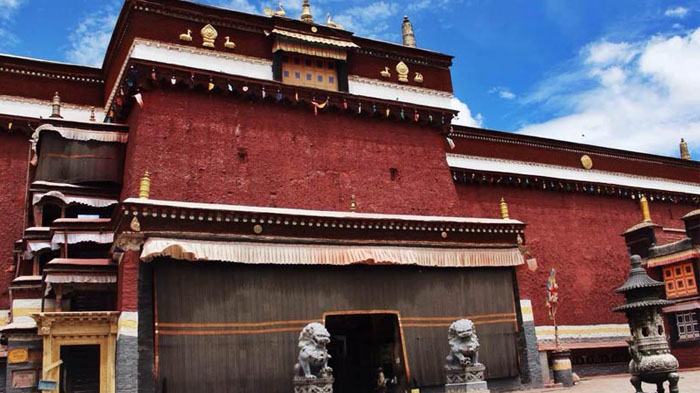 The monastery is not the only famous attraction in this area of Tibet. To the north, in Lhatse County, lies the amazing Phuntsoling Monastery, once the central monastery of the Jonangpa of the Kagyu School of Tibetan Buddhism. After seven centuries of debate on the notions of shentong, the monastery was forced to become a Gelug Monastery by the 5th Dalai Lama in the 17th century.

To the east, not far outside Shigatse City, is the 11th-century Natang Monastery, the main printing monastery of the Buddhist sutras in Tibet. The printing workshops at the monastery were begun in the 17th century by the local government of the region, as a way to reproduce and save the valuable Buddhist scriptures for the future generations. Not only is this the place of initiation of the first Dalai Lama, but it also houses one of the largest collections of cultural relics in Tibet.

South of the town of Sakya, in Yadong County, lies one of the five most famous hot springs in Tibet, Kangbu Hot Springs. A favored remedial hot spring of many of the monks of Tsang, Kangbu is renowned for having 14 different mouths, 12 of which have now been developed into bathhouses that can be used for unisex bathing. The springs are known to cure different ailments in each mouth, with some curing orthopedics, some dermatology, some gynecopathy, some headache, and some heart disease.

Located on the Kelsang West Road in Sakya Town, the Sakya Manasarovar Hotel is just 200 meters from the Sakya Monastery, and is one of the best places to stay while visiting there. A modern hotel set far out from Lhasa and Shigatse, the hotel has a modicum of modern amenities, including double and deluxe rooms, air-conditioning throughout the hotel, standard and basic dormitory rooms, and a 24-hour supply of hot water. However, while this hotel may be modern, in its remote location there can often be a shortage of water, which means you may find that there is no running water in the faucets in your room.

A complimentary breakfast is provided for all guests, and the hotel’s small restaurant serves a decent variety of local and Nepali cuisines. The hotel also has a rooftop terrace, from where you can get a great view of the surrounding countryside and the distant Himalayan Mountains. One of the major points about the hotel is the western toilets that can be found in all the bathrooms, and the rooms are clean and spacious. On the down side, there are often blackouts in the town, which leaves the hotel in the dark. 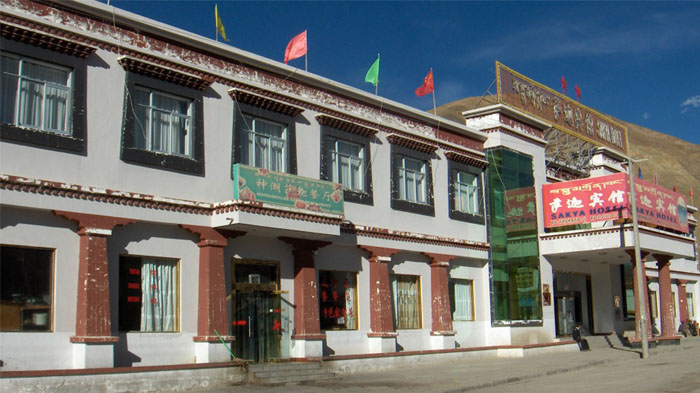 The hotel façade is typical of small hotels in modern Tibet, with its signage in Chinese and Tibetan and with a traditional Tibetan decoration on its whitewashed walls. Inside, the rooms are bright and airy, and the reception and dining room are styled with traditional Tibetan furniture and décor.

Overall, the hotel may have a few problems, but for its location out in the middle of nowhere, it is much better than can be expected. Rated as just a one-star hotel, this is probably the best place to stay in the area for western tourists.

Located just down the road from the Manasarovar Hotel in Sakya, the Sakya Lowa Home Hotel, or Sakya Hotel as it is known locally, is a friendly and family-run hotel that has a great atmosphere and a truly cultural experience.

The hotel is located on the North Baogang Road, just 266 meters from the Sakya Monastery, close to the banks of the Zhongqu River, which flows between the north and south buildings of the Sakya Monastery. A delightfully small hotel built around a small but well-kept courtyard, the hotel has only two floors, and the rooms are in two distinctly different styles. 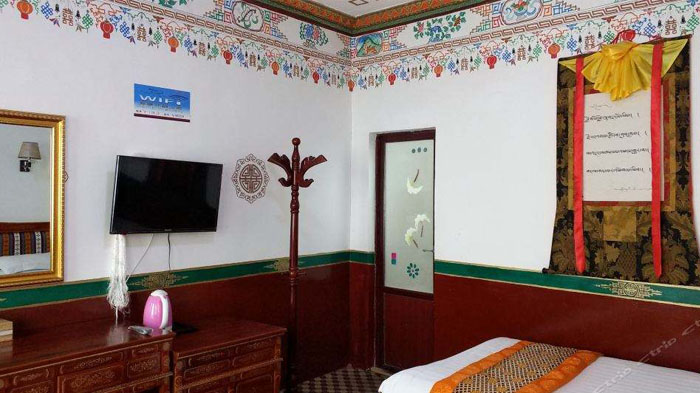 The hotel has twin, double, and triple rooms, with the triple rooms being the newest additions to the hotel. All the rooms are clean and fresh, and are furnished with decent soft beds and traditional Tibetan furnishings. All rooms have new HD TVs, and a few have authentic yak-dung stoves for heat instead of central heating.

The toilets in the hotel are of the typical Chinese squat type, and there are no showers available or baths in the rooms. However, if the weather is nice and you are not worried about showering outside, you can try out using the hand pump in the courtyard to shower, the way locals do in this remote area of Tibet.

The exterior of the hotel is colorful and decorative, with what appear to be French flags (red, white, and blue vertical stripes) along the eaves of the roof, and yak skulls fixed to the typical Tibetan façade of the front of the hotel. The interior of the hotel’s public areas is traditionally Tibetan, with heavy Buddhist overtones that make it an almost spiritual place to stay.

Find More Hotels in Nearby Shigatse

Shigatse, the second city of Tibet, lies around 150 kilometers from Sakya by road, and is one of the main places to stay when traveling through Shigatse Prefecture on the way to Mount Everest or Mount Kailash. Shigatse has a huge number of good to moderate hotels, as well as smaller hostels and guesthouses and you have a huge choice of places to stay.

One of the best hotels in Shigatse, the Gesar Hotel, named for the fearless lord of the legendary kingdom of Ling from the Tibetan Epic of King Gesar. A giant four-star hotel located on Longjiang Lu less than 1km from the city center, the Gesar is a modern hotel with Tibetan-styled rooms, and each decorated with its own individual small thangka of King Gesar. While it may be located in the suburbs of Shigatse, its deluxe rooms, 24-hour hot water, pleasant rooftop teahouse, and large spa complex with a sauna make it one of the most comfortable places to stay in the area. 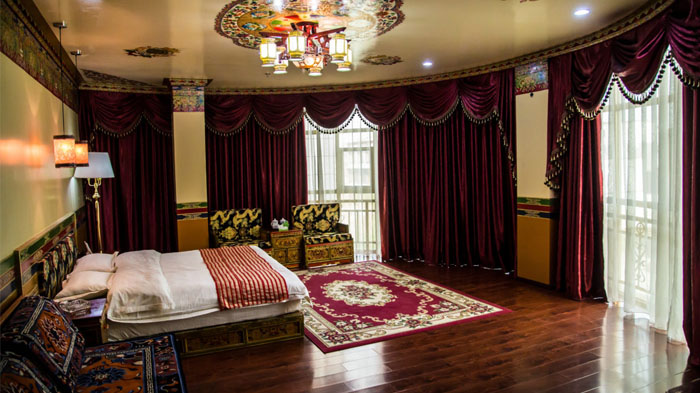 Located just a 20-minute walk from the Tashilhunpo Monastery, the Tashi Choten Hotel is a delightful three-star hotel on Xueqiang Road. The hotel has 109 rooms, which include single, standard, and triple rooms, as well as deluxe suites. All of the rooms are fully equipped and have 24-hour hot water. The hotel has three restaurants - Chinese, Tibetan, and Western - and the fifth floor of the hotel is dedicated to a traditional Tibetan tea room for afternoon conversations and relaxation. 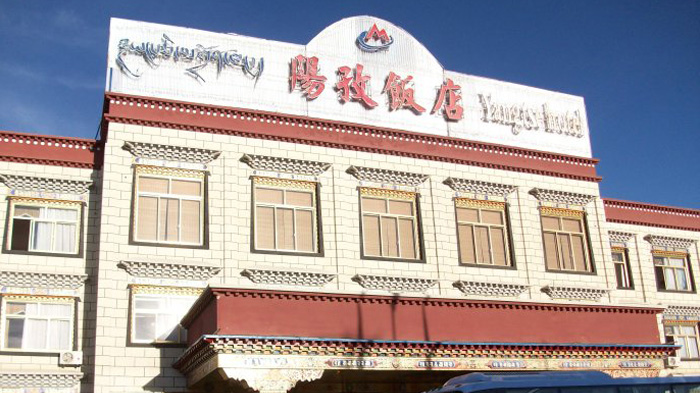 The Yangtze Hotel is a traditional Tibetan-styled hotel in a great location with a good ambiance and elegant façade. A three-star hotel that was the first of its kind in Shigatse, the Yangtze has comfortable rooms, an excellent restaurant with a difference, a relaxing bar, leisure area, café and tea house, and complete medical services for guests. 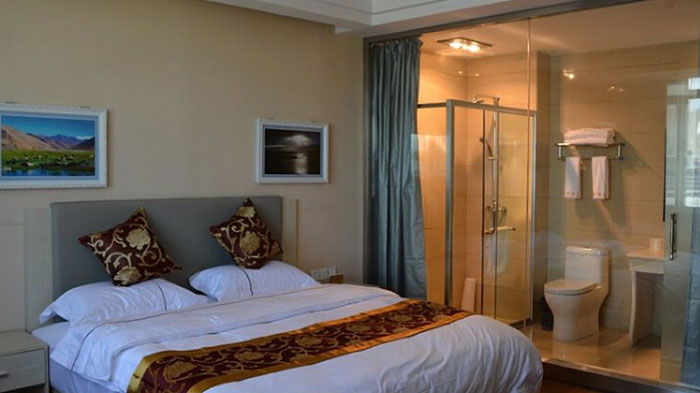 The Shigatse Yak Hotel on Qingdao Road was originally a major three-star hotel in the city, but has become more popular as a budget hotel for guests traveling on to Mount Everest and staying for just one night. Located around 1.5 kilometers from the Tashilhunpo Monastery, the hotel is managed by the same group that owns the Yak Hotel in Lhasa, though it is not as good standard. The area the hotel is located in is quiet and peaceful, and is convenient for shopping in the main shopping streets close by.

The rooms are all clean and comfortable, with air-conditioning heating, spacious floor areas and soft beds, and clean toilets and bathrooms. Bathrooms do have 24-hour hot water showers, but they can sometimes go off in the depths of the cold winter in Shigatse. The hotel only has two residential floors, and with no elevator, guests have to carry their luggage up to their rooms up to the one or two flights of stairs.

The restaurant has a simple menu of Tibetan and Chinese foods, and serve a simple but decent breakfast for travelers before they move on to Everest Base Camp. The internal café also has a range of teas and coffee, as well as pastries and snacks, and you can get internet access very cheaply while there.

Sakya is a very remote location for travelers to travel in Tibet, and there are few places to stay, especially in the peak season when rooms in the few hotels available for international tourists are fully booked. While it is nice to stop in Sakya and relax in the tranquil town by the river, most people end up staying in Shigatse before heading to Sakya and on to EBC. With more hotels than anywhere else except Lhasa, Shigatse is most people’s obvious choice.

0 Comment ON "Hotels in Sakya: what’s the best hotel in Sakya?"