Tibet Autonomous Region in China is well known for being the roof of the world and the “Third Pole”, and it is the third largest source of freshwater in the world, right after the North and South Poles. With so much water in one region, it is little surprise that the rivers from Tibet feed more than 46 percent of the people of Southeast Asia.

Tibet is the location of the headwaters for six of the largest rivers on the Asian continent, and in total, these six rivers provide water needs to around 20 percent of the world’s population. However, it does not stop with just those six major rivers. In total, more than ten rivers that originate in Tibet run on into other Southeast Asian countries to supply them with fresh water.

Rivers That Originate in Tibet

Also known as the Brahmaputra River, the Yarlung Zangbo rises from its source close to Mount Kailash in western Tibet. Running almost 2,900 kilometers across Tibet, it then makes and unusual turn and heads back west and into India, before turning south through Bangladesh and emerging in the Bay of Bengal. This huge river also has the largest waterfall in the Himalayas, measuring 30 meters in height. 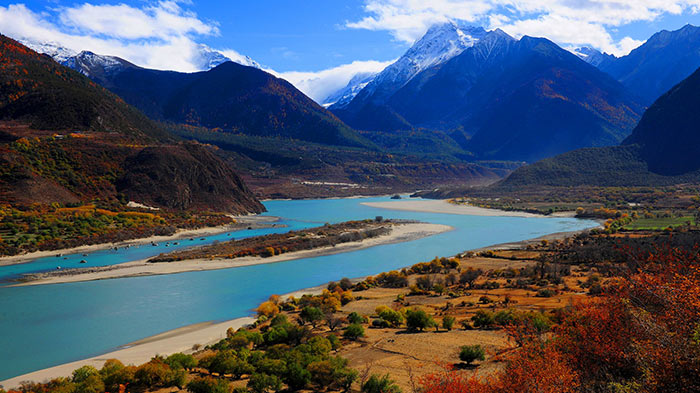 The river originates at the Angsi Glacier in western Tibet, just a short distance to the southwest of Mount Kailash, and later forms the South Tibet Valley as it crosses the plateau. Part of one of the most stunning natural features in Tibet, the river runs through the Yarlung Zangbo Grand Canyon, the deepest and largest canyon in the world, before passing into the state of Arunachal Pradesh. The river becomes wider and calmer as it flows downstream through India before slipping into Bangladesh and joining the Ganges as it heads to the Bay of Bengal.

Known in Tibet as the Gyalmo Ngulchu, the Salween flows over 2,800 kilometers from its source in the Tanggula Mountains in the north of the Tibetan Plateau. Crossing Tibet and southwest China, it flows into Myanmar and forms part of the border with Thailand before finally emptying out into the Andaman Sea. It remains to this day the last major free-flowing river in Asia. 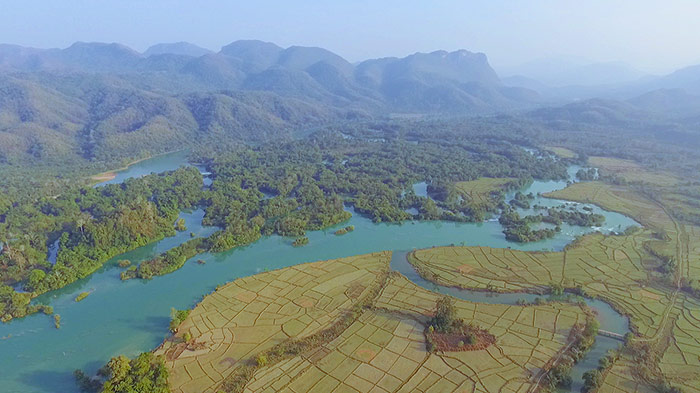 The extensive drainage basin of the Salween in Myanmar rivals that of the mighty Mekong River, and is the home to more than seven million people in the country. However, this part of the river is not navigable by larger boats, and the people of the region are relatively isolated.

Starting as a small stream in the high-altitude areas of Tibet the mighty Mekong River soon becomes a roaring torrent as it passes through Tibet and mainland China. As it turns west into Laos, the river becomes calmer as it flows into the lowland plains. The mighty Mekong forms part of the border between Laos and Myanmar and Laos and Thailand, before running across western central Cambodia and southwest Vietnam, before exiting through the famous Mekong Delta into the South China Sea. 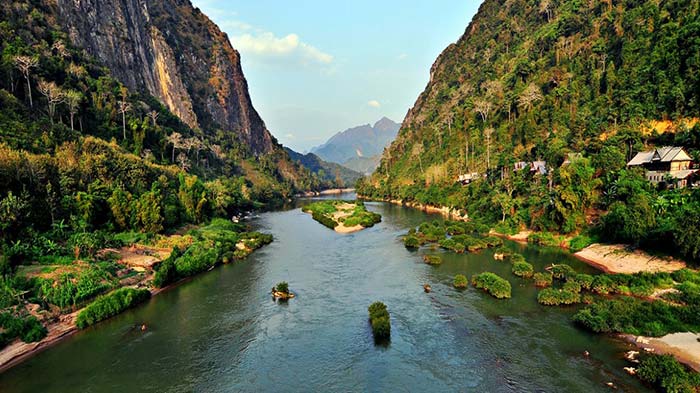 A trans-boundary river, the Mekong is the 12th largest river in the world, and the seventh longest in Asia, covering a total distance of around 4,350 kilometers. Because of the millions of people that rely on the river for either water or livelihood, the Mekong River Commission was formed in 1995 between the governments of Laos, Thailand, Cambodia, and Vietnam, in order to manage and coordinate the resources of the river to sustain its fish and other wildlife.

The Mekong is also subject to huge variations in flow, and the rapids and waterfalls of the river make navigating its entire length almost impossible. While it is a major trade route between western China and the rest of Southeast Asia, the river levels rise and fall with the coming and going of the tropical monsoon, and it has even been known to be little more than a trickling stream in the driest of the dry seasons.

Another river rising in the high Tanggula Mountains of northern Tibet, the Yangtse flows for 6,300 kilometers across China to the eastern coast near Shanghai. Starting at an altitude of around 5,000 meters, this massive Asian river descends from the Tibetan Plateau to flow across China’s lowland regions before exiting in the East China Sea. 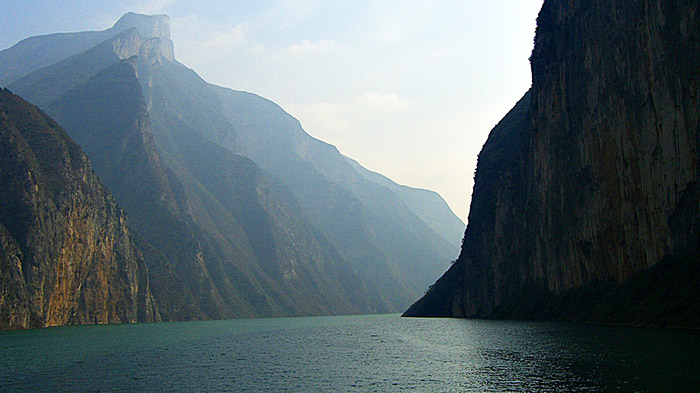 Known in Tibet as the Ma Chu, the Yellow River basin is often regarded as the cradle of civilization in Northern China. This region was the most prosperous area of China during early history, though it was also the source of some of China’s biggest floods, causing it to be nicknamed the River of Sorrows. The second longest river in China, after the Yangtse, its 5,464-kilometer length originates in the Bayan Har Mountains of Amdo and flows across nine Chinese provinces before ending at the Bohai Sea in Shandong Province. 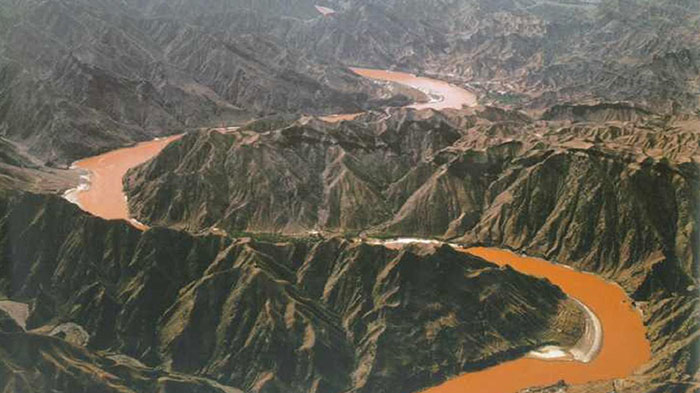 Starting on the Tibetan Pateau, the Yellow River flows through seven different Chinese provinces and two autonomous regions, passing alongside major cities in China, such as Lanzhou, Yinchuan, Wuhan, Zhengzhou, Kaifeng, and Jinan, to name a few. The river is split into three separate stages, known as the Tibetan Plateau stage, the Ordos Loop stage, and the North China plain stage.

In Tibetan, the Indus River is known as the Senggye Tsangpo, and it originates in the area of Lake Manasarovar in Tibet’s Ngari Prefecture. The river runs immediately west and into the Ladakh District of Kashmir before entering Pakistan from the north. The river then flows the entire length of Pakistan, emptying out into the Arabian Sea close to the city of Karachi. Around 3,180 kilometers long, this is Pakistan’s longest river. 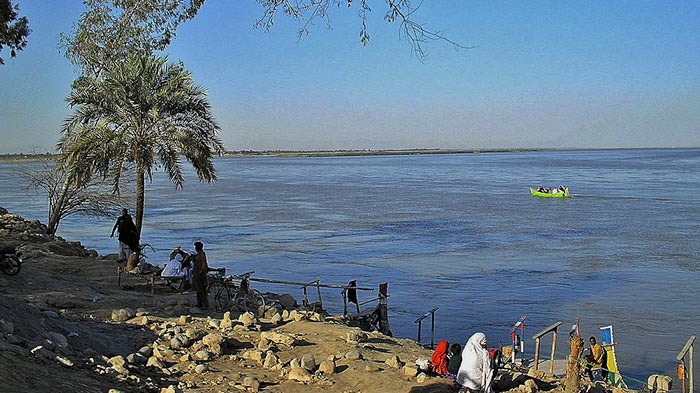 The Kailash Region is also the home of the source of the River Sutlej, or Langchan Khambab in Tibetan, which carves a very different route into Pakistan before joining its sibling from Ngari, the River Indus, for the last 1,000 kilometers to the sea. 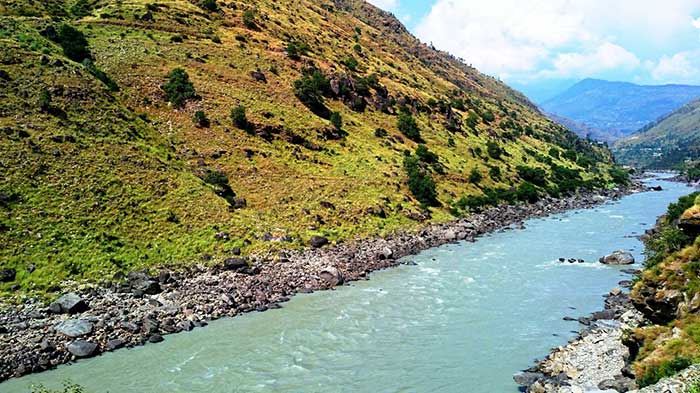 The largest river in Burma (now Myanmar), the Irrawaddy is the main river of Myanmar, and a source of water for most of the country. It is still unclear as to which side of the border the source of this massive waterway lies, as the area is still in dispute between China and Burma. However, its main feeder, the Dulong Jiang, does originate on the Tibetan Plateau, in the north of Tibet in Chayu County and runs through Yunnan Province before crossing into Myanmar to join with the Irrawaddy not far downstream from the source. 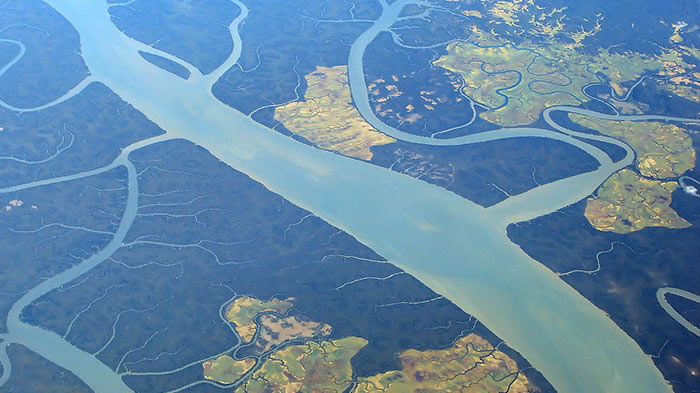 In Nepali, the name Bhote Kosi actually means “river from Tibet”, which is exactly what it is. The river is sourced in Tibet in the lower slopes of the famous Mount Shishapangma, and is known there as the Rongshar Tsangpo, or Shishapangma Chu. Its short journey through Tibet allows it to meet with the Nyalam River, which joins it before they slip gracefully across the border together, thundering down from the Himalayas into Nepal just after the Sino-Nepal border. 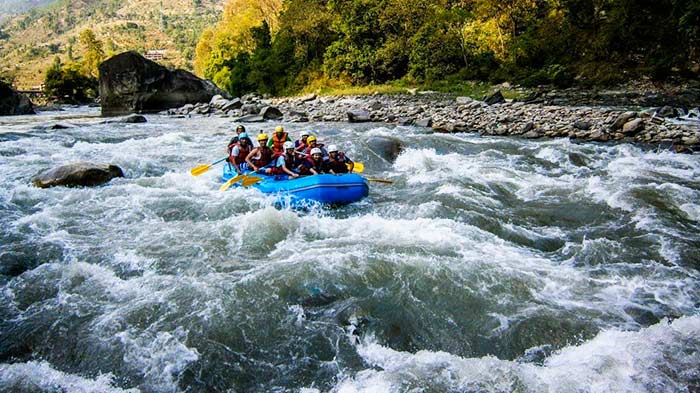 After passing into Nepal and meeting the Sun Khosi River (sourced close to Gyirong in Tibet), the Bhote Kosi joins another Tibetan-sourced river that runs through Nepal. The Arun River has its source close to the slopes of Mount Everest, on the northern side, and flows into the Sun Kosi after it crosses into Nepal, though it is still called the Arun after the merging, despite it being the smaller of the two rivers. After the Bhote Kosi River joins the Arun River, they both merge into the Ganges River, which has its actual source in Northwest India. 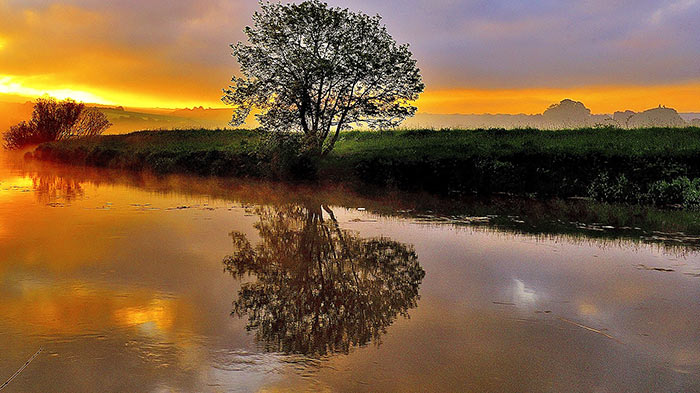 In the far west of Tibet, close to the sacred Mount Kailash, is the source of yet another tributary of the Ganges River. The Karnali River, which springs from the ground to the north of the holy mountain, before heading south to enter and cross Nepal, flowing through India for several hundred kilometers before joining the Ganges. 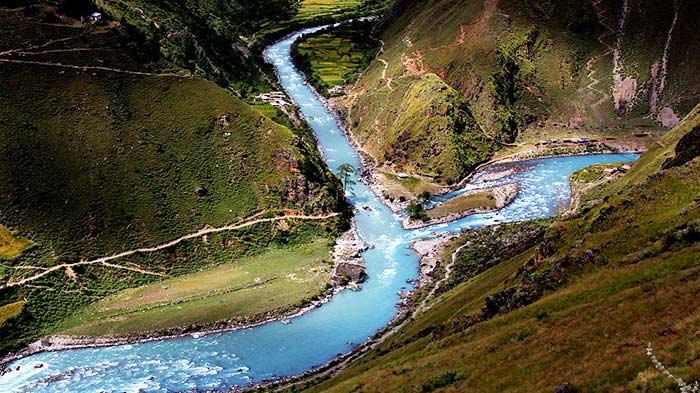 Fed by the Gyirong Zangbo River in Tibet, this long river starts its journey to the Bay of Bengal in Gyirong County of western Tibet’s Shigatse Prefecture. Flowing east past Gyirong Town, the Trishuli River forms part of the long border between China and Nepal and is crossed at Rasuwagadhi Fort / Gyirong Port by the Resuo bridge, the only international border crossing between China and Nepal in Tibet. The river forms the edge of the Langtang National Park in Nepal before crossing the country to join the Gandak River at Devpur. The Gandak River eventually merges with the Ganges at Patna in India. 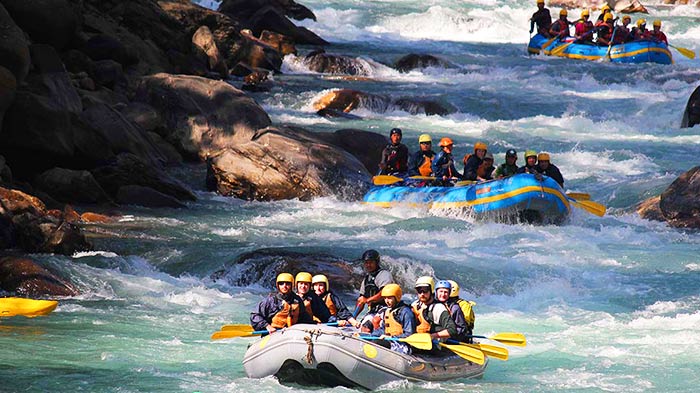