Places to Stay in Tibet: Hotel and Accommodation Tips for Tibet Tour

When Tibet first opened for tourism in the 1980s, accommodation in Tibet was basic at best. However, since that first year of tourism in the region, the hotel and guesthouse accommodation has improved greatly, and even includes some of the world’s top hotel chains in the larger cities such as Lhasa and Shigatse.

The first guesthouses had very basic facilities, and many did not even have indoor toilets yet, making it very inconvenient for the guests at night. Modern hotels and guesthouses in Tibet, especially in Lhasa, have much improved facilities which include hot running water, en-suite bathrooms, air-conditioning, and sumptuously furnished rooms.

Even out in the more remote areas, the guesthouses have improved, adding indoor toilets and bathrooms and air-conditioning in many hostels and guesthouses. And even the tent guesthouses at Everest Base Camp (EBC) have improved from basic nomadic tents to large tents that can accommodate up to 12 adults with ease and comfortable beds to sleep in. Toilets at EBC are still outside though.

Basic Knowledge for Hotel and Accommodation in Tibet

For a region of the world that is set so high up on a vast plateau at the roof of the world, Tibet has some surprisingly good accommodation options that can cater to almost every budget. From the region’s five-star hotels such as the St. Regis to the smaller local guesthouses that are suited to those on a minimal budget, there is now something for everyone in Tibet’s capital.

Obviously, with the massive difference in the area between Lhasa and the mainland Chinese cities of Beijing and Shanghai, the quality of hotel is obvious. What may be considered to be a five-star hotel in Lhasa is only as high as a three-star hotel in Shanghai. The star rating around the world is not based on an international average, but more on the county or region where the hotels are situated. The more populous and expensive the area of the location, the higher the rating compared to the same rating in a poorer and less populated country.

This means that you should not expect a five-star hotel in Lhasa to have the same standards and quality as a five-star hotel in Beijing, Shanghai, or Hong Kong. The hotel rating in Tibet is based on it being a remote region that is not easily accessible. It also includes the state of the region, which is not as modern and well-kept as the big Chinese cities.

Guesthouses are normally found all over Tibet, and the standard of accommodation varies depending on the area where the guesthouse is located. In the larger cities and towns, the rooms in guesthouses tend to be twin rooms, and several have en-suite bathrooms included. Outside these big towns and cities, however, the guesthouses are more likely to have dormitory rooms with four or more beds and shared toilets.

Accommodation in Lhasa is very varied, from the higher class five-star accommodation to the cheaper guesthouses with twin rooms. One of the higher-end hotels, the St. Regis Resort, is a five-star hotel in Lhasa located close to the Jokhang Temple and Barkhor Street on the bustling Jiangsu Road. Opened in 2010 by the hotel chain, it is the most luxurious garden hotel in Tibet. 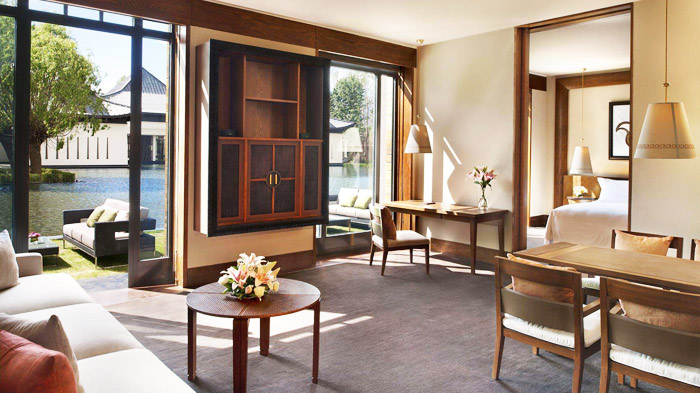 For 4-star hotels, there is none better than the Xinding Hotel, on Jinzhu Road near the Potala palace. Still within easy walking distance of the Jokhang Temple and Barkhor Street, the hotel has 131 stylish rooms and both Chinese and western restaurants.

At the lower and cheaper end of the hotel market, the Tashitakge Hotel is a small 25-room hotel in the Chengguan District, around 200 meters from the center of Lhasa. Both the Jokhang temple and Potala Palace are within easy walking distance and the hotel has long been a favorite of businessmen and tourists. The décor is styled in Nepali design and the windows have an amazing view of the Potala Palace in the evenings.

Places to Stay in Shigatse

While Shigatse may not have the stylish five-star hotels of Lhasa, it does have some amazing places to stay, ranging from 4-star to guesthouse. The Tashi Choten Hotel, which lies just 20 minutes’ walk from the famous Tashilhunpo Monastery, is one such four-star hotel with a typical Tibetan design. The hotel boasts 109 delightful rooms and three full restaurants serving a range of Chinese, Tibetan, and Western foods. 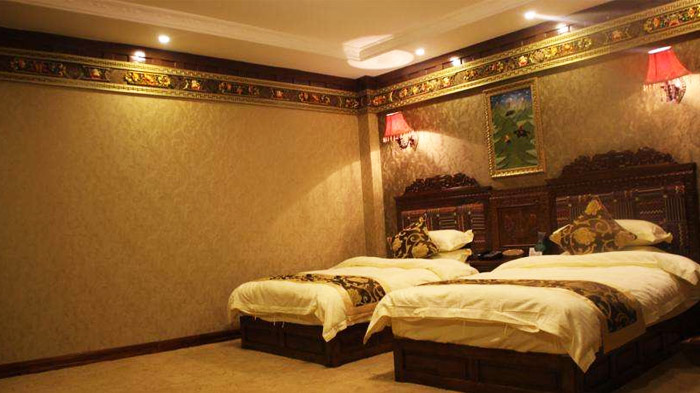 Like its namesake, the Manasarovar Hotel in Qingdao Dong Road is a stunning looking hotel which combines both Tibetan and modern architecture and culture. The rooms are comfortable and airy, and are fully equipped with the things you will need, just in case you forgot your hair dryer. There may only be one restaurant, but the stylish Tibetan teahouse makes up for that with its delicious Tibetan sweet tea and local snacks.

Being close to the famous Everest Base Camp, the hotels in Shigatse are often booked for tourists traveling to EBC in the summer, so it is a good idea to book early to avoid disappointment.

Places to Stay in Ngari

Located far from the bustling center of Lhasa, Ngari Prefecture in far western Tibet has a little different accommodation that you will find in the Tibetan capital. Gone are the luxury hotels and spa resorts, and the hotels are more likely to be 3-star guesthouses and below. If you are traveling to Ngari City, then there are some good 3-star hotel options, such as the Post Hotel in the west of the city or the Shangshung Hotel in the eastern part of the city.

If you are traveling to Ngari to visit Mount Kailash and Lake Manasarovar, then there are fewer options for higher-end accommodation, as the area around these two sacred sites is remote and desolate. Darchen, the town as the foot of Mount Kailash and the starting point for the Kailash Kora, is a small town, but has a lot of good guesthouses as it accommodates a lot of tourists and pilgrims throughout the year. 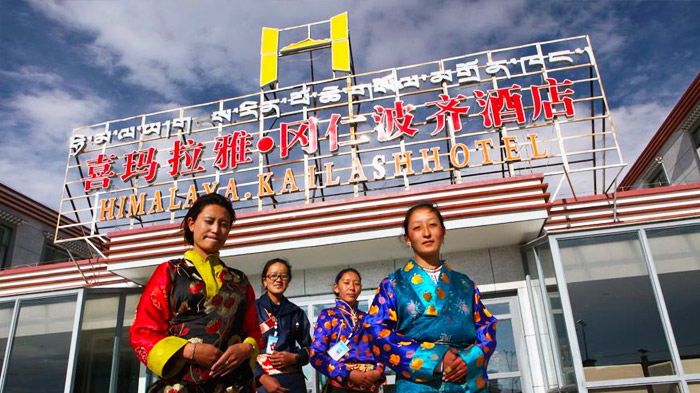 The Gangdise Hotel is an old hotel and is the first place you will see entering the main street of Darchen. It has a choice of standard or dormitory rooms, as well as a camping area, and has hot water for showers. The Lhasa restaurant, to the east of the Gangdise Hotel, also offers decent, clean accommodation and is considered to be the best place to eat in the small town.

Around the kora route there are several places to stay, and the best used are the two monasteries, Drirapuk and Dzultripuk. These are the usual stopping points for trekkers around the kora route, and have a choice of room styles. Both have older wooden rooms that have 2-4 beds in each as well as newer built concrete accommodations, which are more comfortable and have twin and triple rooms with a shared toilet inside the block. However, it is suggested that you bring a sleeping bag as there is no heating in the rooms.

>>Check All Hotels in Ngari

Places to Stay in Lhoka

Lhoka, or Shannan Prefecture, lies to the south of Lhasa, and is a rarely visited region of Tibet by international tourists. However, it does have some delightful places to stay. Tsedang is the main town in the area, and the seat of the prefecture, and the Tibet Yulong Hotel is one of the best places to stay for those on a budget. Located in the center of the town, it has all the required amenities and is within easy traveling distance of the major attractions such as Samye Monastery, Yamdrok Lake, and Yumbulagang Palace. 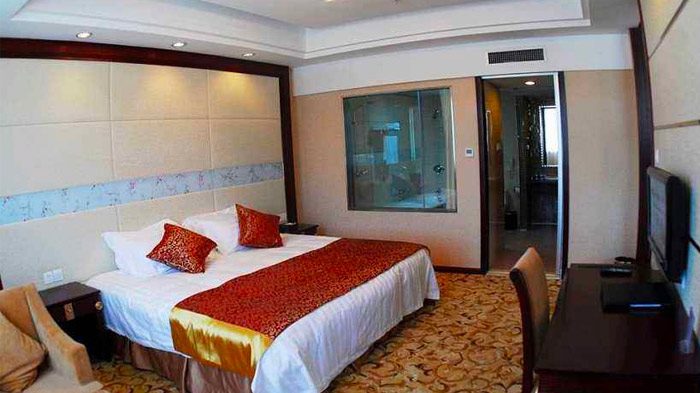 If you want something a little more up-market, the four-star Tsetang Hotel is the ideal place to stay. Located on Nedong Road in Tsedang Town in its own sculpted grounds, the hotel has a choice of suites from standard right up to “presidential” style suites. The multiple restaurants serve a variety of Cantonese, Sichuan, Western, and Tibetan cuisines and the grounds are the perfect place to take an evening stroll.

>>Check All Hotels in Lhoka

Places to Stay in Nagqu

The Nagqu Prefecture to the north of Lhasa abounds with places to stay, though many of them are in the county seat of Nagqu County. There are no luxury hotels in the area, though there are plenty of 3-star hotels and local guesthouses that can provide comfortable accommodation. 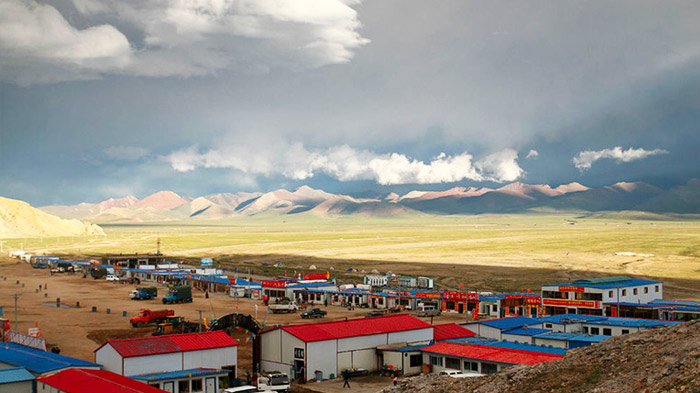 For those traveling to Lake Namtso, one of the Great Three Holy lakes of Tibet, the Zhongxin Nagqu Hotel is an ideal place to stay. Located just 20 minutes’ drive from the railway station in Damxung County, it is just a short distance to Lake Namtso and provides comfortable 3-star accommodation as well as a shopping area.

>>Check All Hotels in Nagqu

Traveling to Tibet can be done at any time of the year, though the peak summer months from mid-April to Oct. are the most popular. Hotel bookings are also at a premium at this time of year, as it is the peak of the tourist season and hotels can book up fast.

Especially, April, May, Sept. and Oct are the best times of year for trekking in Tibet. Hotels can still be busy. And while in summer months, due to the summer break, the cost for hotels is also expected to rise. So, it's advisable to book ahead.

Winter, from December to the end of January, is the cheapest time of year for hotels, as there are fewer tourists that travel to Tibet during the colder months. While it is cold, it is still possible to visit the main attractions of the region, and you can even still visit EBC, as it is rarely deep in snow at this time of year. February and March are normally closed months for international travel to Tibet, as it is the time of the Tibetan New Year celebrations, known locally as Losar.

0 Comment ON "Places to Stay in Tibet: Hotel and Accommodation Tips for Tibet Tour"