Tibet is a sacred land of mystery, much of which has yet to be discovered and revealed. Just like any mystical belief, to learn what these mysterious things are, one has to look inside and find the meaning in oneself. Traveling to Tibet can be an inspirational and spiritual experience that will leave you feeling awe for the intense Buddhist mysticism of the Tibetan plateau.

Worship the Buddha in Jokhang Temple

Jokhang Temple in Lhasa is the most sacred temple in Tibetan Buddhism and the center of Buddhist spiritualism in Tibet. One of the oldest buildings in Tibet, the temple was built by Songtsen Gampo for the statues of Buddha that were brought to Tibet by his two wives. Inside the Jokhang Temple in Lhasa, the statue of the Sakyamuni Buddha, at the age of twelve, still resides in the main hall. 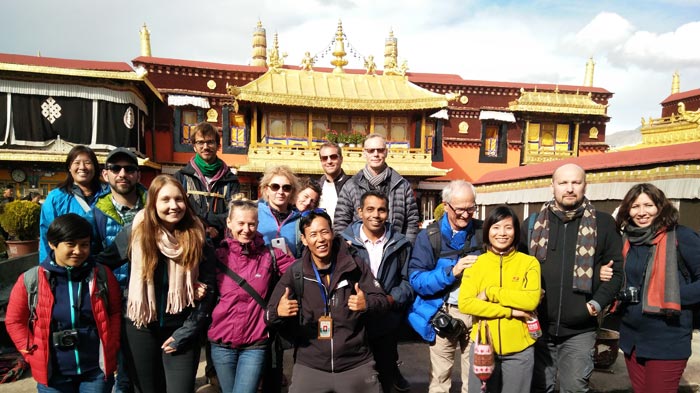 The statue is a life-size replica of the Buddha as a child and is covered in gold with robes and garments covering the body of the statue. The robes and garments are covered in pearls and diamonds and inlaid with a fine gold brocade that enhances the look of the plain statue to appear as if the living Buddha is sat before you teaching.

The temple itself attracts pilgrims from all across Tibet, who often travel thousands of kilometers on foot to get to the city and pray in front of the gates of the temple. Most blessed are those that get the chance to pray in front of the statue itself. As what is probably the most holy relic of Tibetan Buddhism, the statue has a special place in Tibetan Buddhist’s hearts and souls, as one of the oldest statues of Buddha in the world. It is said that the statue was made whilst Buddha was still alive in his first incarnation, and that it was blessed by Buddha himself. Check Lhassa tour with Jokhang Temple

Hidden away in the remote Gyaca County of Shannan Prefecture in Tibet is the small lake that is known for being the place of visions. Tibet is well known for its three great holy lakes - Manasarovar, Namtso, and Yamdrok - but this small lake in southern Tibet is little known outside the plateau. Lhamo La-tso, a small lake in a high mountain valley in Lhokha, is the real holiest lake in Tibet, and has a special place in Tibetan Buddhism. 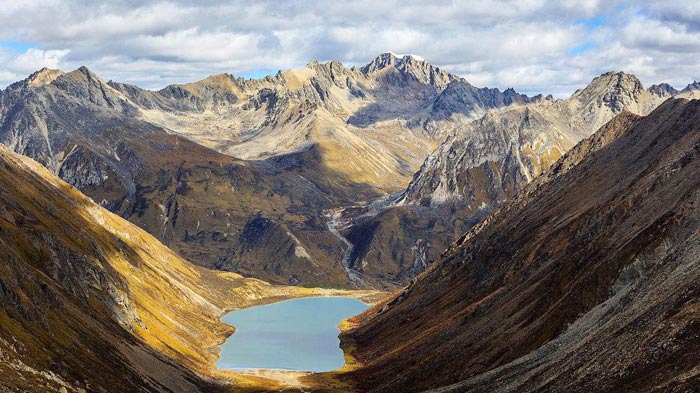 The lake is considered to be holy because it is said to have the power to show you your past and future lives when looking at your reflection in its waters. It is this small and inconspicuous lake that leads the heads of Tibetan Buddhism to seek out the whereabouts of the reincarnations of the Dalai Lama and the Panchen Lama on the occasion of their deaths.

Set in a ring of barren mountains high in the southern Himalayas in Shannan Prefecture, this small yet beautiful lake is like an azure gemstone sparkling in the sunlight as you look down from the only approach, a pass that lies at more than 5,400 meters. The lake itself lies at around 5,100 meters above sea level and is visited by many pilgrims looking to see a revelation of their futures in the azure waters.

The pilgrims are required to stay at the lake for three days and three nights, meditating on their future before being able to see the visions of what is yet to come. Their meditations must be incomplete silence out of devout reverence to this sacred lake, and many perform a kora walk around the lake throughout the three days and nights.

Meditate in the Cave of Guru Rinpoche in Rongbuk Monastery 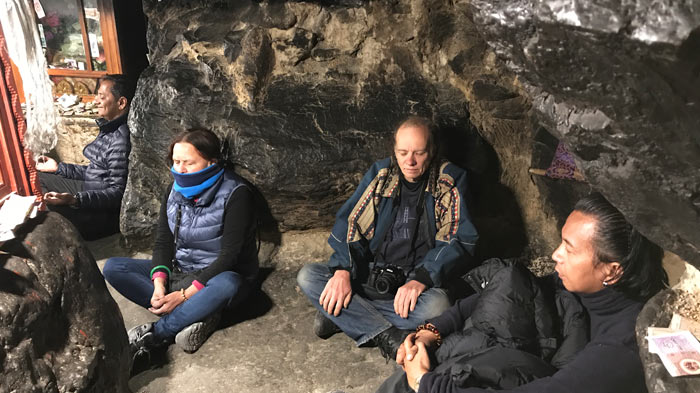 Our clients are meditating in the cave at Rongbuk Monastery

While the cave was the meditation hole of Rinpoche when he was in Tibet, it has also been used for meditation by many other gurus and sages of Tibetan Buddhism, including the Indian Buddhist scholar Atisha. In fact, if you have something that you feel you need to sit in the quiet and think about, there is no better place than the solitude of the meditation caves at Rongbuk, and visitors are allowed to enter the caves and sit for a while to contemplate the meaning of life, the universe, and everything. Check Everest Base Camp tour with Rongbuk Monastery

Explore the Ruins of Guge Kingdom

Far to the north of Rongbuk Monastery and Mount Everest lies the northwest prefecture of Ngari. The furthest place in Tibet from Lhasa, Ngari Prefecture is home to the ancient Guge Kingdom, a realm of Tibetan kings that dates back to the 10th century AD. After the death of the Tibetan Emperor Langdarma, his grandson left the insecure conditions of U-tsang in central Tibet and established his own kingdom in what is now Ngari, with its capital at Guge. 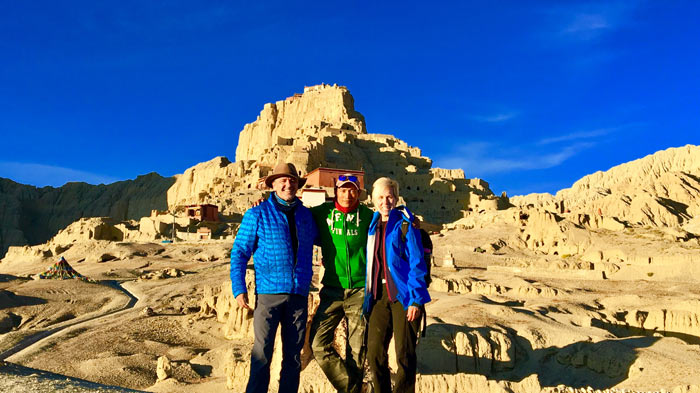 This ancient kingdom did not last, however, with the break up of the empire coming about in the 11th century. Over the following centuries the kingdom was to be put into the possession of the Mongols, the Drepung Monastery, and the Sakya School of Tibetan Buddhism. There was a brief reinstatement of the kingdom in the 14th century, which lasted until the middle of the 17th century, when the kingdom was finally invaded by the Central Tibetan Government and brought under Tibetan Buddhist rule. Much of the kingdom was abandoned by the people, many heading to Mustang, Ladakh, and Purang in Nepal and Pakistan. Now, all that is left of this once-great kingdom in the west are ruins and sand.

Have Holy Bath and Camp at Lake Manasarovar

Lake Manasarovar, in western Tibet, is considered to be the most sacred of the Great Three Holy lakes of Tibet. Lying just to the south of the famous and sacred Mount Kailash, Manasarovar is considered to be a sacred lake in all four religions. In Hinduism, it is believed to have been created in the mind of Lord Shiva, and manifested on earth as his spiritual essence, while in Buddhism it is reputed to have been the place where Maya conceived Buddha. 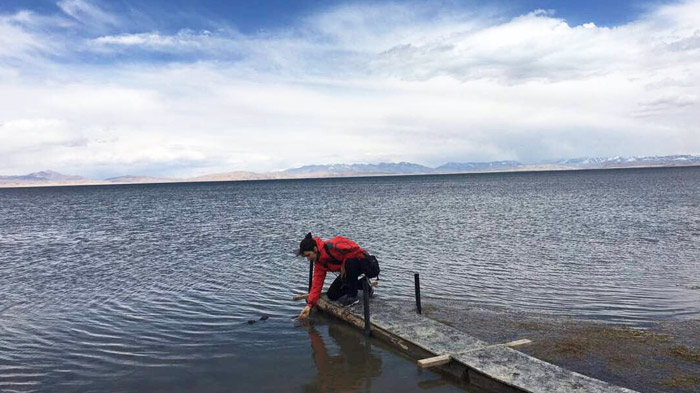 Buddha was recorded to have visited the lake on many occasions to meditate, and the waters of the lake are said to be waters of purity. Both Hindus and Buddhists believe that drinking the waters or bathing in them can wash away the sins of a hundred lifetimes, and it is a popular place for pilgrims to come and bathe after completing the kora around Mount Kailash.

Mount Kailash, the sacred mountain of the world and the legendary center of the universe, Mount Meru, lies to the north of Lake Manasarovar, in the far west of Tibet. Known to be the most sacred mountain in the world, it is held in reverence in four separate religions; Hinduism, Buddhism, Jainism, and Bon. 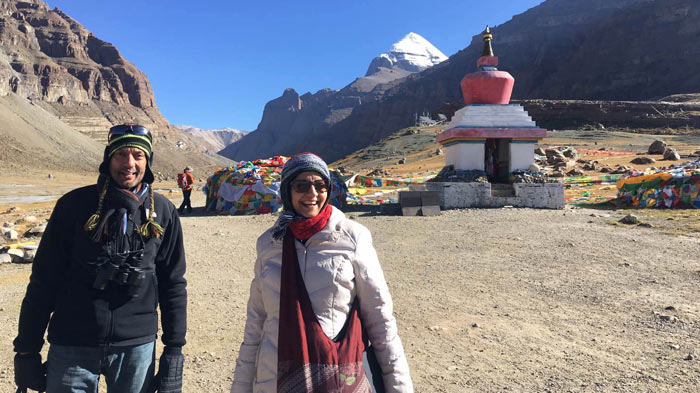 Follow the pilgrimage route of out kora around Mt.Kailash

Lying around this holy mountain is what is probably the most stunning trek in Tibet, if not the world. The ritual kora route around this sacred mountain is the end of many pilgrimage journeys by Tibetan and Indian devotees. A very spiritual and existential experience, the walk around the kora route of the only mountain in Tibet that will never be climbed is the experience of a lifetime.

Mount Kailash, which is also the site of one of the most sacred sky-burial grounds in Tibet, is deemed to be too holy to allow any foreigner to set foot on its sacred slopes and has been protected by the government since the 1960s. However, it is not forbidden to walk the kora route around the base of the mountain, and this is just what thousands of tourists and pilgrims do every year.

The Kailash trek route covers 52 kilometers of rugged and rough terrain on its path around the mountain, and at its highest point, at Dolma La Pass, reaches an altitude of 5,636 meters. The view from the pass is stunning, and one can feel the intense spiritual belonging that Tibetan Buddhists have around this mountain. Check Kailash tour with Manasarovar and Guege Kingdom